The rising interest in growing mushrooms at home

Mushroom growing kits are making it easy for home growers 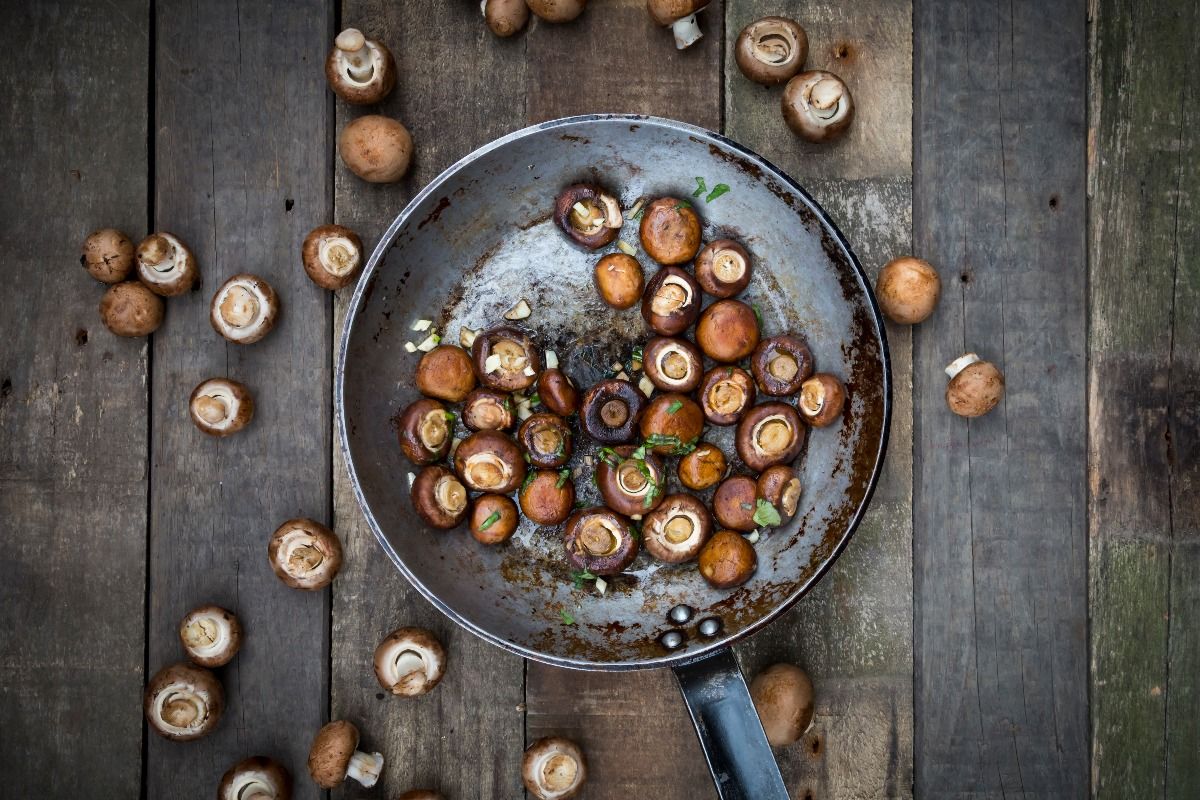 For most home cooks (admittedly, myself included), mushrooms generally arrive in the kitchen in one of two ways: you either purchase them at a supermarket or farmers' market, or occasionally, you might forage them, aka find them in the woods.

But there is a rising interest in a third way of acquiring edible fungi: growing mushrooms at home. Just as baking sourdough bread, backyard gardening and other homesteading-like activities grew in popularity as people stayed inside more during the Coronavirus pandemic, interest in mycology and homegrown mushrooms also surged in the past year.

Interest in cooking and eating mushrooms had already been on an upward trajectory pre-pandemic. "I've been fascinated by mycology and mushrooms for a very long time," says Sharon Chin, a business consultant from Flushing, New York. "During the pandemic, once I was home and had more time, I thought, 'If I'm going to have a new indoor plant or grow my own things, why not work on mushrooms?'"

Chin purchased a kit from Smallhold, a New York City-based mushroom grower who pivoted to consumer sales and mushroom kits as their restaurant business slowed down in 2020. "I saw that and thought 'Oh, this is really accessible, this is really easy. I want to try it,'" explains Chin, who picked up two pounds of mushrooms from the grower, along with her kit for growing blue oyster mushrooms. New York Times writer Zoë Schlanger, who also used Smallhold's kits to home grow mushrooms, describes the process, when "pink oyster [mushrooms] emerge as a cascade of salmon shingles," as "more dramatic than [she] could have imagined."

Mushrooms are mysterious and ephemeral," Smallhold co-founder Andrew Carter told Schlanger for the Times. As both newbie growers and experienced pros like Carter will describe, one moment you have a bag filled with compressed waste (generally a mix of sawdust, wheat bran, ground corn cobs, etc), along with microscopic mycelium (kind of like mushroom "seeds") hidden out of sight. Cut a few Xs in the bag, spritz daily with water, and in a week or so, you see scaly oyster mushrooms or bulbous lion's manes spring forth, ready in just a few more days to be sauteed into your morning omelette.

For Back to the Roots co-founders Nikhil Arora and Alejandro Velez, the idea of growing mushrooms started with a college lecture, when an inspiring professor mentioned that mushrooms could be grown in used coffee grounds. The men's interest in the inherent sustainability of fungi eventually led to their container gardening company, which sells mushroom kits, windowsill herb planters and more.

"In the past year . . . I think the kits have been especially good for parents that can [use this as an] activity with their kids and an educational activity they can do inside," says Arora. Like Back to the Roots, many gardening retailers across the country saw record sales during the early months of the pandemic, to the point that seeds and tools became unavailable. One study found that gardeners spent 42% more time in the garden in 2020 than in prior years

"Growing mushrooms is such a great entry point," says Arora. "They grow in 10 days, you literally don't need a backyard. You can do this on the 44th floor of a Chicago high-rise and you can still experience the magic of growing your own food. I think there's something really exciting about the ease of use and the pace and the quickness of it, it makes it accessible to everybody."

Anneliesse Gormley isn't growing her mushrooms on the 44th floor of a high-rise; instead she's been filling every container she can find, from 5-gallon bins to a violin, vases, wooden spoons and more, with sawdust to grow the fungi. A woodcarver based in Asheville, North Carolina, Gormley first got interested in mushrooms as a material to incorporate into her work; she uses them, along with dried flowers, to add a botanical flair to her cutting boards. After realizing she could use her leftover wood shavings to grow the mushrooms, she started regularly producing fungi herself; she currently grows around 30 pounds a week using mycelium and other materials sourced primarily from Portland, Maine's North Spore. "Just on a sustainability level, I thought how amazing it would be to have a piece of wood, use it to make something, and then use that sawdust to create a home and a vessel that mushrooms can grow out of, for either food or art or both," she says.

Growing mushrooms is now a passion project for Gormley. "Our spare bathroom has turned into a little mushroom grow operation," she explains, complete with a humidifier. "Once you've seen how one thing can grow, it's like 'Okay, maybe we should try shiitakes and see how they grow, or blue oyster mushrooms, or silver oyster. It's kind of just turned into this passionate love project."

A growing trend of growing mushrooms at home

The rising popularity of home gardening certainly helped attract new people like Chin, Gormley and Schlanger to growing mushrooms at home. But as we've previously reported, mushrooms are having a moment in general. The 2019 film Fantastic Fungi, narrated by film star Brie Larson and featuring a number of mycologists, mushroom growers and enthusiasts, earned a coveted 100% from Rotten Tomatoes and has been reviewed on Amazon more than 5,000 times. More than a dozen new books about mushrooms and mycology are being published in 2021; the #growingmushrooms hashtag on Instagram has been used almost 10,000 times; and Google searches for the term "growing mushrooms" spiked during the pandemic, roughly doubling in the 2020 summer months.

More than a decade after their initial coffee grounds inspiration, Arora and Velez's Back to the Roots mushroom kit is one of Amazon's top sellers in the plants and gardening section. "In the last year, we've just seen an incredible, incredible increase in momentum around mushrooms. And really, it's been something that's been building, I think, year-over-year for the last five years," he says, pointing to the rising market for health food items, supplements and other food products made with mushrooms. "I think there is just more and more awareness now about the health benefits of mushrooms."

Back to the Roots is among many companies prospering from this rising interest in mushrooms. North Spore told the Times they saw a 400% increase of sales of introductory growing supplies during the pandemic, while The Guardian reports British company Grocycle saw a 320% rise in grow kit sales during the same time. The global mushroom market — including fresh and dried mushrooms for cooking, as well as mushrooms used in medicinal products, beauty products and recyclable packaging — is expected to reach $95.2 billion by 2028, according to the market research company Grand View Research.

As with many other niche hobbies, there is a whole community of people interested in growing mushrooms to help support and foster those wanting to get into and learn more about fungiculture. Just like gardening or bread baking, the general task is simple, but small nuances can impact the final results. A newbie sourdough baker may try once, using a starter bought online and the baking instructions that come along with it; they may also spend weeks growing their own culture from scratch, meticulously tracking the hydration like it's a science project, joining Facebook groups and going deep on sourdough baking Reddit threads. The same range of obsession exists in the field of homegrown mushrooms.

Chin's experience was the former; she followed the kit and its simple instructions, only realizing after her mushrooms had emerged that she needed to account for humidity and other factors. "I think you learn by what goes wrong," she says, explaining that some of her mushrooms shriveled up and dried in her arid New York apartment. "If I was to do it again, I would learn more about the conditions and the processes, but I trusted the kit to keep it really simple. There are a ton of best practices out there that anyone who's interested in doing this can look at as they go on this journey."

In North Carolina, Gormley is on that journey. "I feel like growing mushrooms is one of those things that you can come in having little experience, and then you can be a complete master and you're growing very different mushrooms," says Gormley, who gives grain spawn — mushroom mycelium grown in rye or millet grain, which is what also fills the growing kits — to friends interested in fungiculture. She also recommends Trad Cotter's book "Organic Mushroom Farming and Mycoremediation" to anyone interested in learning more. "Anyone, anywhere can do it. It's not one of those things that has to be overly expensive or overly troublesome. And it's so sustainable too, because, once your coffee grounds are done, you just pour them into an area and they've become incredible fertilizer for something else to grow."

Mushrooms and the future

With a boom in mushroom growing kit availability from shops like Smallhold, North Spore and California's Far West Fungi, there has never been a better time to start growing mushrooms at home. "Growing mushrooms has never been more accessible. I think if you are truly interested in doing it right, there's a community with resources to help you do it well," says Chin, who will look to online resources like Ag Tech X when she next decides to grow mushrooms. "My first experience was probably the entry point, and I hope to do more in the future."

Beyond the appeal for first-timers of growing their own food, Arora also sees real future potential in eating mushrooms. "There's so much in this whole [fungi] kingdom and we've barely scratched the surface," he says. "We grow way more asparagus than we do mushrooms, and you know that's just one little crop, and mushrooms are a whole kingdom."

Mushroom growing kits offer home growers the opportunity to explore a new corner of the fungi kingdom, beyond the button mushrooms or portobellos — which are actually the same species, in different growing stages! Whether it's the dazzle of the bright pink oyster mushrooms, the fuzz of the lion's mane or the medicinal benefits of reishi, these kits allow home growers to see and taste mushrooms they are unlikely to find at their regular supermarket.

"[From the beginning we've seen] families and kids and a new generation wanting to reconnect with their food and where it comes from, and grow it themselves," says Arora, who explains the company has donated tens of thousands of the kits through the program. And whether its school children, city apartment dwellers, or homesteaders in North Carolina, home fungi cultivation offers an approachable way to do just that. "That's it," says Arora. "It's about connecting a new generation to food and to the land, getting them into the garden."