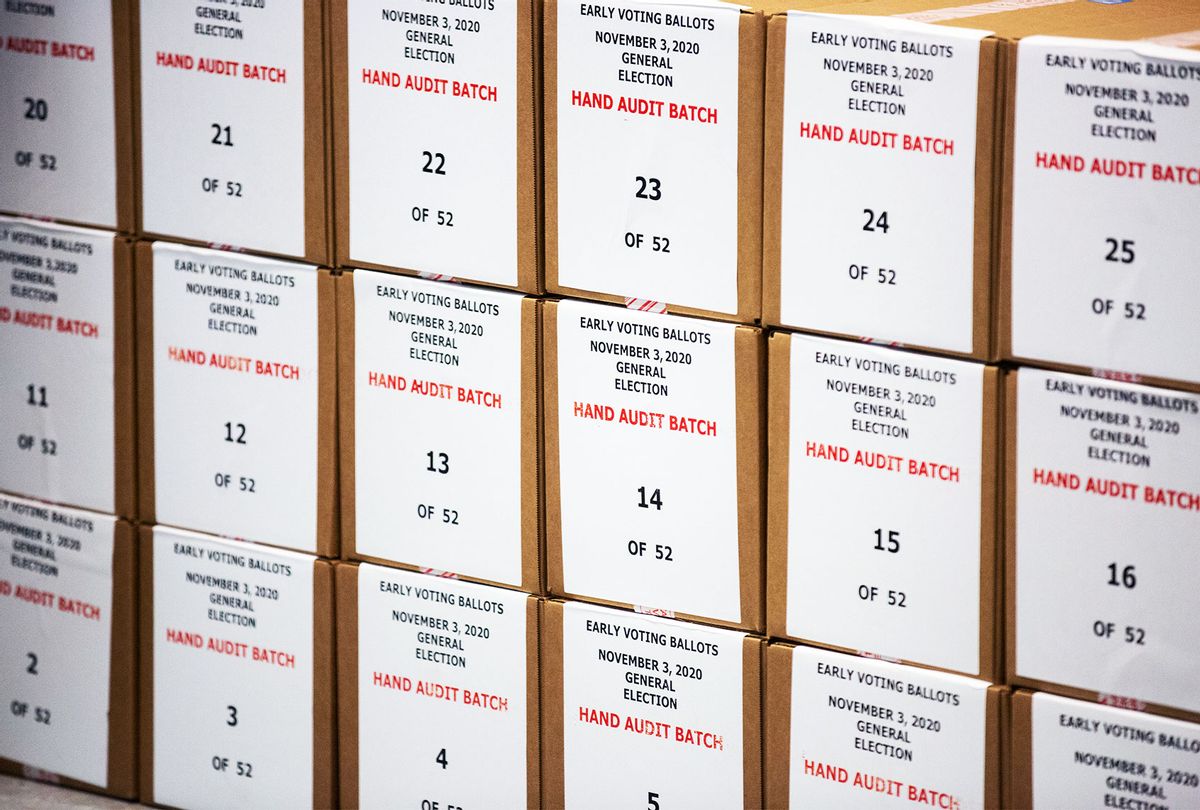 Ballots are pulled aside for a hand audit by Maricopa County Elections Department staff ahead of Tuesdays election on October 31, 2020 in Phoenix, Arizona. Early voting lasted from October 7th through the 30th in Arizona, which had a record number of early voters. (Courtney Pedroza/Getty Images)
--

The Republican-led Arizona election "audit," which recently has inspired a new echo in Montana, now faces opposition from a conservative talk radio who initially backed the effort and also fresh turmoil surrounding Cyber Ninjas, the previously unknown firm hired to carry out the audit.

With the audit entering its final days, conservative talk-show host Mike Broomhead told CNN anchor Pamela Brown over the weekend that his position on the audit had changed in recent weeks because Republicans had let the procedure become "biased" and overtly partisan in nature.

"I just think that they lost focus on being fair and unbiased," he stated on CNN. "I think they have allowed it to turn into a very biased audit, where they are speaking only to the people that already believed ahead of time that the election was stolen, and they haven't really produced any evidence to the contrary."

Broomhead had not initially argued that the election was stolen, but said he thought the audit would be a worthwhile measure to ensure confidence in the electoral process.

"This is not about politics for me," he told The Arizona Republic in mid-June. "It's not about right and left. It's about right and wrong. I'm an Arizonan, and I'm an American before I'm a Republican, but I'm proud of all three. I don't see the direction this audit is going as doing the state of Arizona or the country any good anymore. The goal of a transparent and unbiased audit is gone. You've either got to fix it or end it."

But it's not only Broomhead who is speaking out against his fellow Republicans.

On Monday evening, Maricopa County recorder Stephen Richer, a Republican, ripped into the never-ending audit in his county, the state's major population center. "Let's be honest, this Arizona audit isn't going to convince anyone outside of the crowd that already believes the election was stolen," he told CNN host Anderson Cooper. "We think that the Arizona Senate boarded this train without knowledge of where it was going, and I don't think it's going to a good place."

While the slow-moving audit has generated intense coverage from right-wing media, no evidence has been produced that challenge the official and certified result, which was that Joe Biden won Arizona by roughly 10,500 votes.

Judges across the country have tossed out cases alleging widespread election fraud, which has not deterred Trump acolytes like former 2016 campaign head Steve Bannon from pushing for a "freight train" of nationwide Republican audits.

While the Arizona audit is pushing onward and Trump allies pushing for audits in other states, the firm tapped to lead the audit, Cyber Ninjas — headed by fervent Trump supporter Doug Logan — is now under increased scrutiny.

According to a CNN report last week, friends and acquaintances of Logan describe him as increasingly sounding like MyPillow CEO Mike Lindell, who has made increasingly wild allegations of a widespread voter-fraud conspiracy.

"It's hard to say anything bad about the guy. He's a lovely person. He's just nuts now," said Tony Summerlin, who has been friends with Logan for 15 years, and said he helped him win a cybersecurity contract with the Federal Communications Commission five years ago. "It's scary; because if someone like him can turn into this, who can't turn into this?"

Summerlin said that in all the years he'd known Logan, before the Arizona audit, "we never, never had a single political conversation; that's what stunned me about this. ... He said, 'there's definitely something there.' I said, 'based on what?' He said, 'it'll come.' I said, 'you sound like the My Pillow guy.'"

Another friend of Logan, who asked not to be named because she works with both Republicans and Democrats in Washington, DC, and feared blowback from being linked to him, described him as very smart, very competent in cybersecurity, and politically naïve. "Doug may not have thought it all the way through," she said.

Cyber Ninjas now appears to be running with a skeleton staff. CNN reports that most of the company's listed phone lines, including those supposedly dedicated to "purchasing" and "human resources," redirect to Logan's phone.

Cyber Ninjas did not return Salon's request for comment on this story.