A stunning "Strawberry Moon" will rise Thursday. Here's what that means (and how to see it) 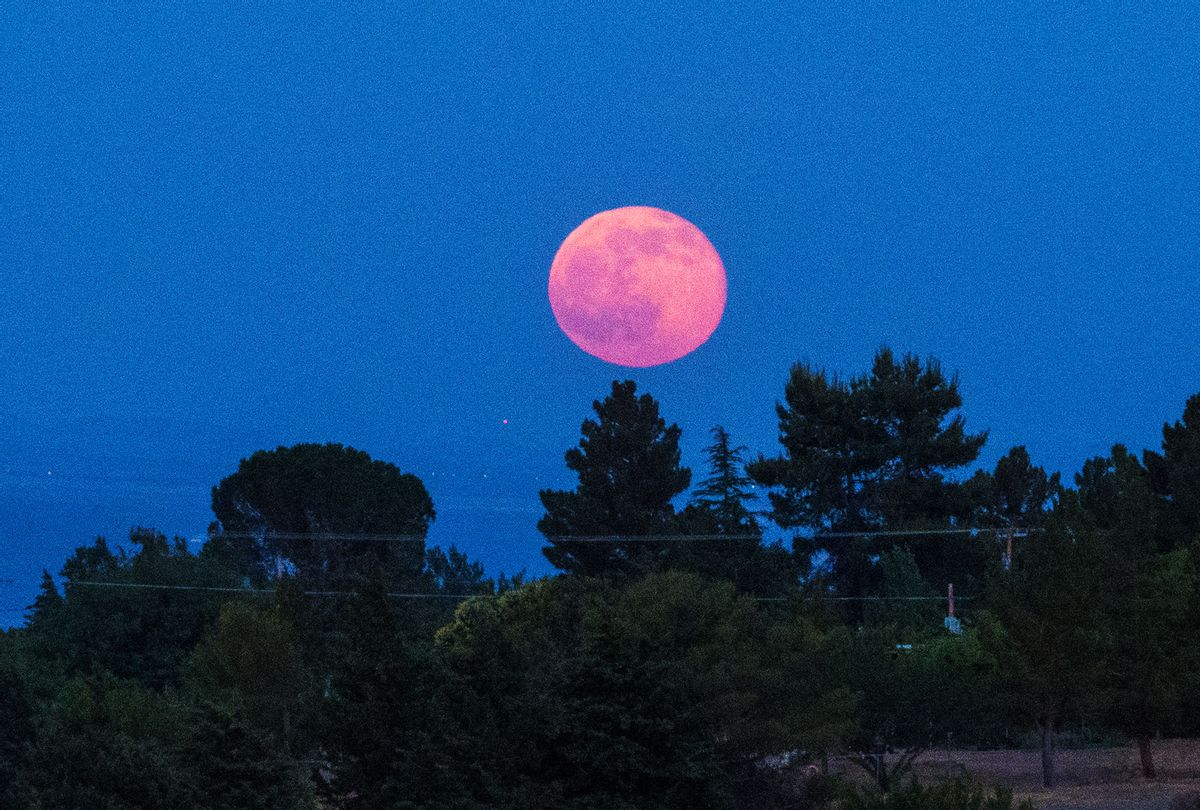 If you've ever seen a full moon in June, you may have noticed something a little off about it. The moon usually glows a bright snowy white. Yet the full moon during this month generally appears with an orange tint, as though it were made of stale cheddar.

This is a phenomenon known as the "Strawberry Moon" and, in the year 2021, it is scheduled to happen on the night of Thursday, June 24.

But why the moniker "strawberry?"

As for the orange tint, there's an astronomical explanation. When the moon sits low in the sky, it appears redder, similar to how the sky in general appears red towards the horizon at sunset.

"The color of the full moon depends on location," Harvard University theoretical physicist Dr. Avi Loeb wrote to Salon. "At high latitudes, the full moon nearest the summer solstice shines through more atmosphere than at other times of the year, making it more likely to have a reddish color as a result of scattering. For this reason, the moon may appear red or pink when it is low in the sky, and is the same reason sunsets and sunrises have these colors."

A full moon always appears in the sky almost directly opposite the sun — meaning that towards the solstice, when the sun is highest in the sky, the moon rises low in the sky just as the sun set, and thus appears reddish tinted by the atmosphere, as Loeb noted.

The origins of the term Strawberry Moon date back about a hundred years. It became traditional to refer to this June full moon as the "Strawberry Moon" after the Maine Farmer's Almanac began publishing Native American names for the moons during the Great Depression. Prior to that, it was often known to Westerners as the Mead Moon or the Honey Moon because the popular alcoholic beverage mead (which uses fermented honey) was associated with its appearance. That said, as the astronomy editor of The Old Farmers Almanac told Salon by email, it is important to understand that this is not an official scientific term.

"Each Native American tribe had their own name for each month's Full Moon," Bob Berman explained. "The Algonquin called the year's sixth full moon the Strawberry Moon, as did some American colonists, though most termed it 'The Rose Moon.' But the Laguna tribe called this moon, 'The Corn Moon,' the Lakota Sioux called it 'The Moon of Making Fat,' while the Cheyenne labeled it 'The Moon When the Bulls Are Rutting,' et cetera."

He added, "For astronomers (and NASA) there are only two accepted full moon names," namely September's Harvest Moon and the Hunter's Moon in October.

Astronomically speaking, this particular Strawberry Moon is also a big deal because it will also arguably be the last supermoon — an occasion when the moon is at its closest point to Earth in orbit — to occur in 2021. Curiously, dubbing this moon a "supermoon" is debatable: Some authorities, such as the Farmer's Almanac, regard a moon as "super" only when it is closer than 224,000 miles away from Earth. Tomorrow's Strawberry Moon will be around 224,662 miles away, meaning it is 662 miles shy. (The moon is in an elliptical orbit around the Earth, and varies between being 252,700 miles away and 221,500 miles away. 224,662 miles is certainly on the closer end of that range, meaning it will appear in the sky larger than average).

In any case, the Strawberry Moon has been associated with people getting hitched, chickens laying basket upon basket of eggs, and harvests being particularly bountiful for "sweet" agricultural staples like strawberries. Throughout history, and in cultures from the indigenous Americas to the west, the Strawberry Moon has been linked to the most important and fundamental aspects of human life: farming and fertility. Indeed, the term "honeymoon" may even originate from the Strawberry Moon, either because of the popularity of June weddings or because it is a moon associated with sweet foods.

If you're worried about missing the Strawberry Moon, you've got time to see it. It is expected to be visible in some form or other for roughly three days. Moon-tracking websites like timeanddate.com can help you figure out when and how to best view it in your area. Should that fail to pan out, take comfort in the knowledge that there are six more full moons scheduled for 2021: Buck Moon, Sturgeon Moon, Harvest Moon, Hunter's Moon, Beaver Moon and Cold Moon. Each one is scheduled to occur once a month within that month's final two weeks.