It's easy to laugh at the clowns melting down at school board meetings, but there's a method to this madness 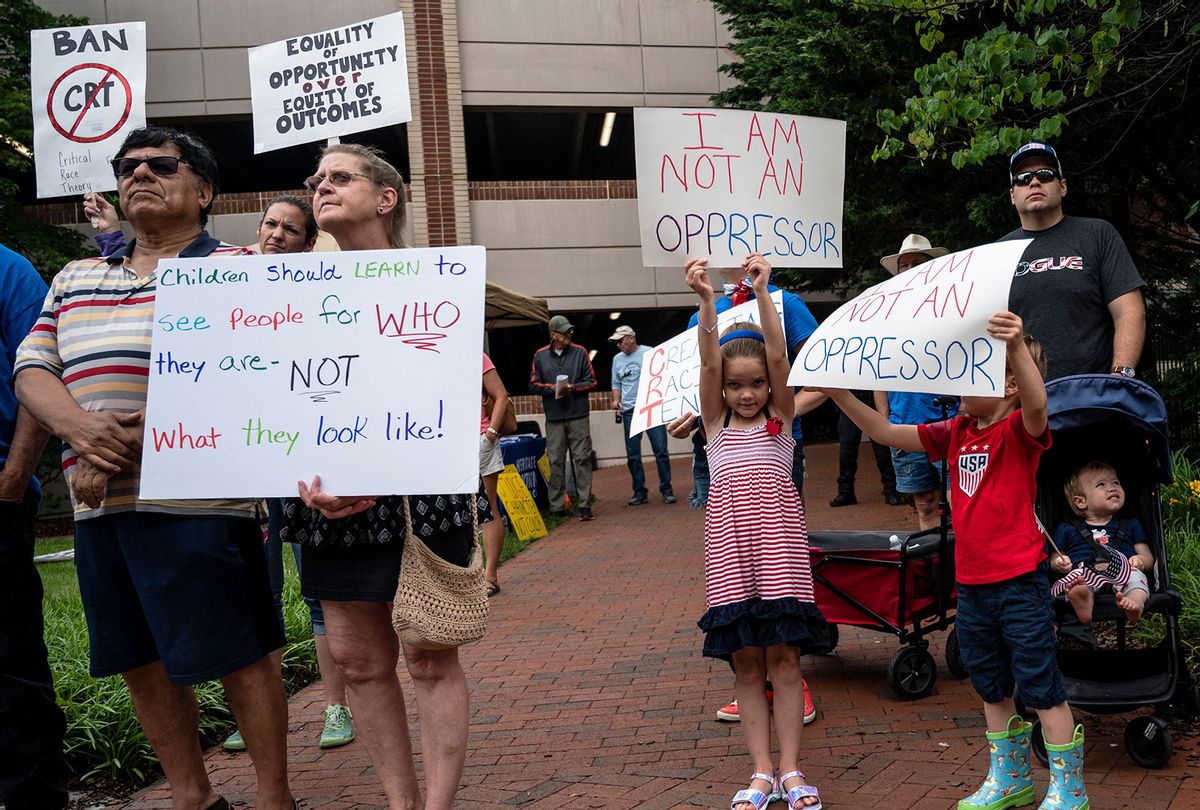 This time they are spun up on Fox News propaganda about "critical race theory" — which is neither taught in public schools nor is about hating white people. So mobs of white people are crashing school board meetings across the country and having loud and deeply silly tantrums over something that isn't even real. They're shutting down meetings, getting arrested, and generally making fools of themselves on camera in a way that, to liberal eyes, is idiotic and embarrassing.

The scene tonight at a raucous Loudoun County school board hearing where many came to voice opposition to critical race theory. The meeting was stopped when the crowd wouldn't quiet down and two were arrested. pic.twitter.com/WkiZCGJ6Jm

It's hard not to laugh at some dude being dragged out of school board meeting half-naked, hollering about how he refuses to be oppressed on the basis of the pasty skin he is amply showing off to the world. But it would be unwise to underestimate these people, just because they act like a bunch of clowns. What they are doing has been carefully orchestrated by GOP operatives for the express purpose of stoking racism. The ridiculous behavior we're seeing from white people across the country right now is a feature, not a bug, of this strategy.

In the past few weeks, much has been written highlighting how the national freakout over "critical race theory" is not organic, but complete astroturf ginned up by Republicans who are looking for a fresh new angle on the race-baiting tactics they've used to organize their base for decades. In a heavily reported piece, NBC News exposed how what seems to be a parent uprising is, in fact, a "coordinated movement with the backing of major conservative organizations and media outlets." Both Media Matters and the New Yorker have taken deep dives into how much this entire movement is being propped up by Republican operatives posing as nothing more than "concerned parents."

But it's not just the lies about critical race theory that are deliberate here. The over-the-top antics at school boards are central to this scheme. While it's hilarious to liberals, watching white people on a victim trip melt down, it's actually very effective as a propaganda technique.

First and foremost, it gets attention, both on the national and local news. School board meetings are usually dull affairs, so when people are screaming and getting arrested, that tends to grab headlines and, perhaps even more importantly, get shared a lot on social media and talked about in local communities. And because everyone is talking about how nuts these people are acting, what they're not talking about is how "critical race theory" is neither what they say it is nor being taught in public schools.

In addition, the clownish antics work to reinforce the illusion that GOP activists are trying to create: that this is a "grassroots" movement, instead of the carefully constructed astroturf campaign it is. The average person looks at these photos of badly dressed people acting like animals and thinks "what a bunch of yokels," not "what a carefully orchestrated political campaign created by professional propagandists." And while they may laugh at them, they are also absorbing the message the propagandists are trying to send, which is that this about the concerns of "ordinary Americans."

The Manhattan Institute's materials for organizing these school board raids, for instance, are pretty clear about how acting like an ass is central to their strategy. In a pamphlet titled "Woke Schooling: A Toolkit for Concerned Parents," the authors accept that their views may not be popular but argue that there is "rarely such a thing as a truly popular movement." Instead, they suggest that a "small group of people who demand something will generally get the compliance of the majority who are indifferent," especially if that small group of people "are intransigent."

"If you're more stubborn than the most stubborn proponent of critical pedagogy in your school, you may win through intransigence alone," they write.

In other words, the biggest bully wins. And while they cover themselves by writing that "being polite and conciliatory is the correct first move," the authors swiftly move to advising that "do not discount the effectiveness of getting angry, particularly if you find that you need to escalate past a one-on-one conversation." Basically, it's not about persuasion so much as being so unpleasant that they'll give into your demands just to get rid of you.

None of which is to say that the people acting like boobs on camera or getting arrested aren't, in fact, workaday Fox News junkies instead of paid operatives. They mostly are. Just like Donald Trump winding up the Capitol insurrectionists, most of the puppeteers here work by getting people wound up and then stepping back to let the yokels get arrested or otherwise embarrass themselves. Activists get the ordinary conservatives worked up this way by exploiting the widespread jealousy and resentment of liberals that fuels the modern American right. Black Lives Matter protests, in particular, drew a lot of defensive reactions from conservatives who sublimated their own guilt about not caring into a "who do you think you are" reaction to those who do. GOP activists understand how to exploit this obsessive resentment by offering opportunities to conservatives to play-act at being their own version of what they think the left is doing. So they show up and scream and act like bullies, which is what Fox News told them anti-racists do. They even get arrested, fulfilling the "see, I can do it, too" fantasies ginned up after years of being annoyed at progressives who get arrested protesting injustice.

The "Woke Parents" pamphlet tickles this resentment urge in conservatives pretty hard. The pamphlet repeatedly justifies bullying tactics on the "liberals did it first" grounds. "Advocates of critical pedagogy have wrung huge changes out of administrations through pressure campaigns built on assertions of 'righteous rage' and 'justified anger,'" they write, using scare quotes to imply that progressives merely pretend to be anti-racist for the Instragram likes. "[Y]ou should not be afraid to match your opponents' level of being demanding—after all, it has been successful for them," they add.

Needless to say, liberals did not get schools to teach that slavery was bad and Jim Crow was real because a bunch of nutty people screamed at the school board until they got their way. These things are simply facts. If that makes conservatives uncomfortable, that is their own problem to deal with. Schools should not be in the business of hiding facts or even telling lies, simply because doing so flatters the egos of oversensitive Fox News addicts.

Unfortunately, the Manhattan Institute is right: Bullying all too often works.

It's crucial not to sit back and just assume this "critical race theory" panic will burn out on its own. The left must keep pushing back and insisting that the truth about American history be taught in schools — before we are all silenced.