As air travel starts up again, emotional support animals get left behind 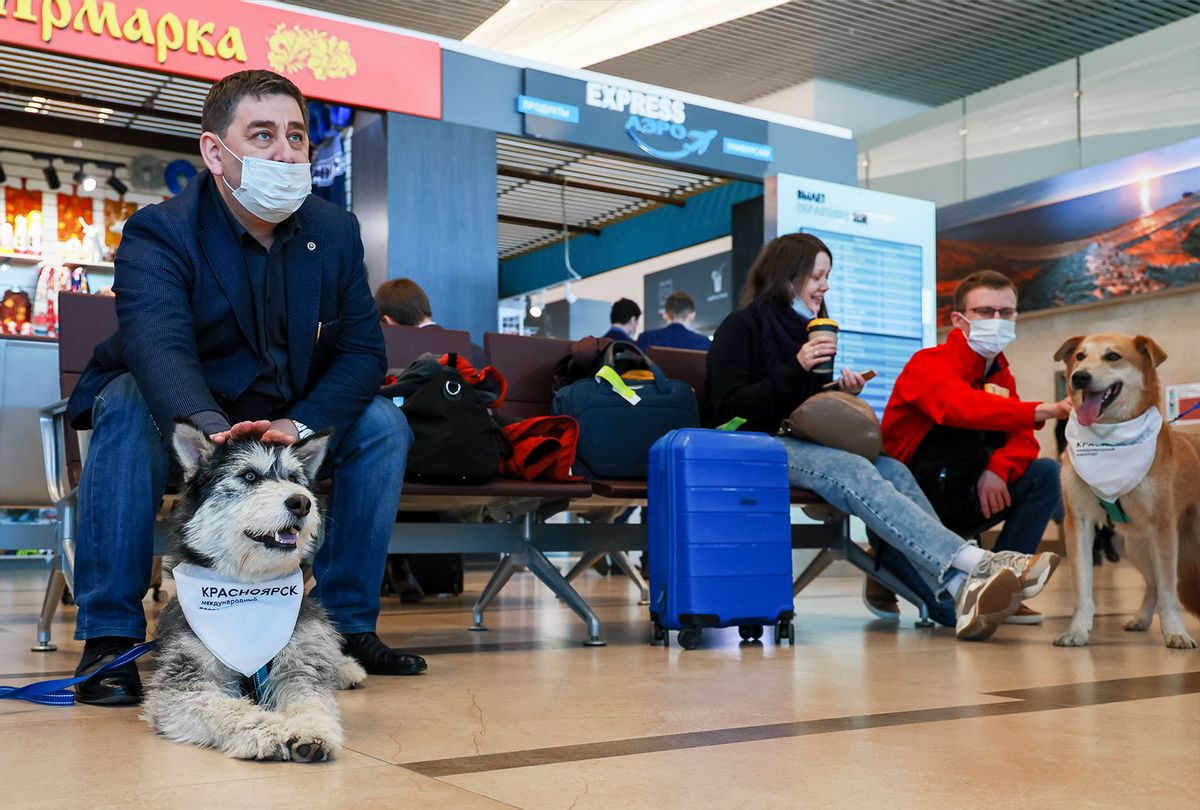 As a Licensed Independent Clinical Social Worker (LICSW), LeAnn Egeto is passionate about training her miniature pinscher, Habibi, to serve as an emotional support animal.

Professionally, Egeto has seen clients connect with animals after recalling a traumatizing event from their past. Personally, she's experienced the benefits of having the comfort and support of an animal. Before she got Habibi — right before the pandemic shut down the country — she had Willie, a rescue mutt. Before Willie passed away, he and Egeto used to fly between Boston and Florida together. He'd sit on her lap and provide support during the flight, and during her visits with her family.

"When I flew to go see my mom or I flew to go see my father, which are really complicated relationships and can very easily trigger episodes of dissociation and PTSD [post-traumatic stress disorder], my dog helped me stay grounded," Egeto said. "I used him as an ESA [emotional support animal] for my own PTSD and anxiety."

But flying from the East Coast to the South is no longer an option for Egeto and Habibi.

In December 2020, when very few Americans were traveling, the Department of Transportation (DOT) quietly announced a final ruling in a revision to its Air Carrier Access Act (ACAA) stating that U.S. carriers would no longer accommodate emotional support animals. The only service animals that would be accommodated would be service dogs, a category that generally doesn't include dogs trained solely for emotional support. By January 2021, Southwest, Delta, United, Alaska, JetBlue and American Airlines had all announced that they would no longer allow emotional support animals in accordance with the DOT's guidance.

As Habibi is trained to be an emotional support animal and be with her during a flight, such separation was stressful for the two of them, Egeto says. She opted to buy a car to facilitate trips back and forth from Boston and Florida rather than fly.

"Not being able to have my [emotional support animal] available to me while I'm transitioning out of the pandemic was insurmountable," said Egeto, calling the situation "stressful." Egeto says she was "grateful" she had the resources to buy a car, but did not want to; "I hadn't owned one in two years," she noted.

"This misbehavior not only threatens the health and safety of our passengers and crew, but also passengers with disabilities traveling with legitimate service animals," the letter stated.

The U.S. Department of Transportation now defines a service animal as a dog (no other animal) that has been "individually trained to do work or perform tasks for the benefit of a qualified individual with a disability, including a physical, sensory, psychiatric, intellectual, or other mental disability." Psychiatric service dogs (PSD) are still protected under the Air Carrier Access Act; but emotional support animals — which are certified by a mental health professional such as a psychiatrist, psychologist, or other licensed mental health care provider for a person with an emotional or mental disability — are not. Notably, the DOT change to dogs-only service animals is prohibitive to people with disabilities who are allergic to dogs.

Many disability-justice groups oppose the move, fearing that it will make it harder for people with disabilities to travel.

"The regulations are fundamentally unfair, prioritizing corporate interests over the rights of Americans with disabilities," wrote Curt Decker, an executive director of the National Disability Rights Network, in a USA Today op-ed. "We believe that the provisions dealing with emotional support animals should be rescinded."

At the center of the debate lies one fundamental question: Were emotional support animals being too leniently designated before? Many therapists say no — or at least in their own practice, a diligent evaluation was always conducted.

Prairie Conlon, a licensed professional counselor and Clinical Director of CertaPet, a service that matches people with licensed mental health professionals for an emotional support animal evaluation, explained that there are explicit criteria to determine if someone qualifies for an emotional support animal — specifically, two questions that stem from the Fair Housing Act.

"In other words," Conlon continued, "does the animal work provide assistance, perform tasks or services for the benefit of a person with a disability, or provide emotional support that alleviates one or more of the identified symptoms or effects of a person's existing disability?"

Answering these questions can be an "extensive" process, Conlon said, noting that these evaluations may consist of "written assessments and measures, structured clinical interviews, treatment planning, and continued check-ins."

Dr. Therese Rosenblatt, a psychologist and author of  "How Are You? Connection in a Virtual Age," said she wrote letters for her clients that could be shown to passengers on the plane as well.

"I'm thinking of a few patients of mine who needed this, and it was not a hard call," said Rosenblatt. "These were people who had a lot of trauma in their background, who could get triggered or activated in a number of different situations, and once they were triggered they'd be consumed by panic and anxiety."

Rosenblatt stressed that she does not issue emotional support animal letters willy-nilly. She specified that she did so only for her regular clients.

"I do think some people give them out more liberally than I would," Rosenblatt added. "And I do it very deliberately and take it very seriously."

As a mental health professional, Egeto said, there's a concern that the inability for patients to have emotional support animals by their side will be detrimental to them, particularly in the wake of the pandemic.

"A problem in our country is that we define health as an absence of symptoms and not a presence of well-being," Egeto said, adding some clients have relied on animals to keep them company throughout the pandemic."People are relying on alcohol, food, and animals, and sex, to survive this."