One day after a domestic catastrophe made international headlines, DeSantis was focused on a "crisis" at the border 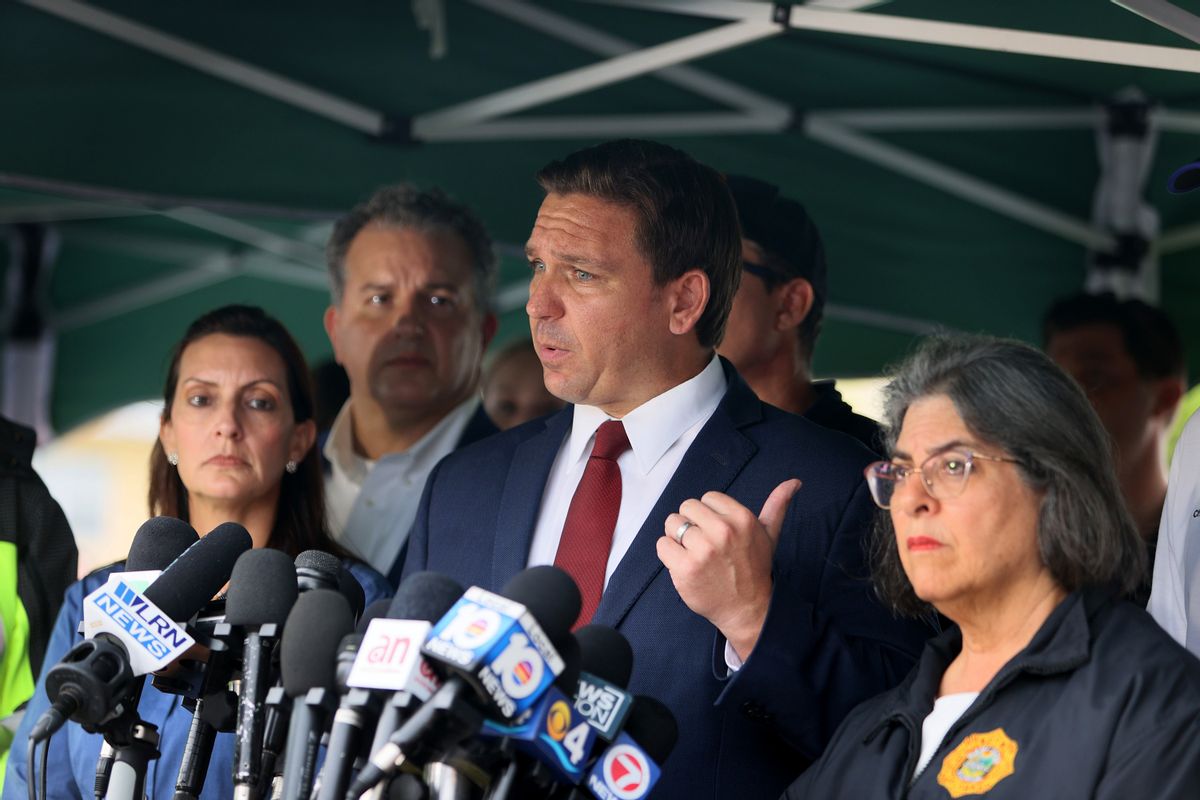 The morning after a major building collapse near Miami left four people dead and close to 200 others missing for several hours amid a frantic search for survivors, Gov. Ron DeSantis, R-Fla., left the scene — heading north to Pensacola to instead see off a sizable contingent of Florida law enforcement officers on out-of-state deployments to Texas and Arizona.

Dozens of officers from a variety of state agencies will be deployed for 16-day shifts at the U.S. border with Mexico, DeSantis announced in a Friday press release, the first posted to his website since the collapse of a high-rise condo building called Champlain Towers South in Surfside rocked the state one day earlier.

And despite the major domestic catastrophe making international headlines, DeSantis referred to the current conditions at the U.S. border as a "crisis" that requires immediate action. Immigration activists have blasted this rhetoric, used by the GOP in recent weeks, as a political distraction meant to obscure the actual problems faced by migrants and border communities.

The juxtaposition of both events likely wasn't lost on those watching DeSantis' subsequent appearance on Fox News, in which the hosts veered off-topic from the building collapse to blast President Joe Biden's border policies. Even the Florida officers who could, in theory, be sent out-of-state on the assignment appeared to be confused by the governor's hastily arranged announcement, reports suggested.

Representatives for sheriffs' departments across Florida told the Pensacola News Journal on Friday that they weren't quite sure what resources were being allocated to which jurisdictions, what personnel they should ready and who exactly was footing the bill. The question of funding for the venture failed to gain much clarity during DeSantis' Friday press conference, with the governor punting the inquiry as something to be hashed out in the future.

"That's still a point of discussion," he said in response to a reporter's question about who was paying for the deployment. "Typically, if someone would help us, we would pick up some of their funding, so that's how we would hope that it goes."

DeSantis was one of three Republican governors to commit state officers to border duty after a letter from Gov. Greg Abbott, R-Texas, and Gov. Doug Ducey, R-Ariz., called for help from their counterparts in the remaining 48 states. In particular, DeSantis used a rising number of methamphetamine arrests to justify the deployment, saying the the influx of drugs coming from Mexico is an existential threat to the safety of everyday Floridians.

Meanwhile, at least 159 people remain missing in the rubble of Champlain Towers as first responders continue their search for survivors. Authorities had located 120 people who were unaccounted for by Friday afternoon, according to The Washington Post.

It remains unclear what caused the building to suddenly collapse, though reports suggest that the site sits on reclaimed wetlands, with one 2020 study finding it had been slowly sinking since at least the early 1990s.

Biden approved an emergency declaration on Friday, which clears the way for federal relief efforts.