The discovery of a new type of supernova explains a stellar explosion from A.D. 1054

Astronomers have long suspected electron-capture supernovae to exist; now it's finally been observed 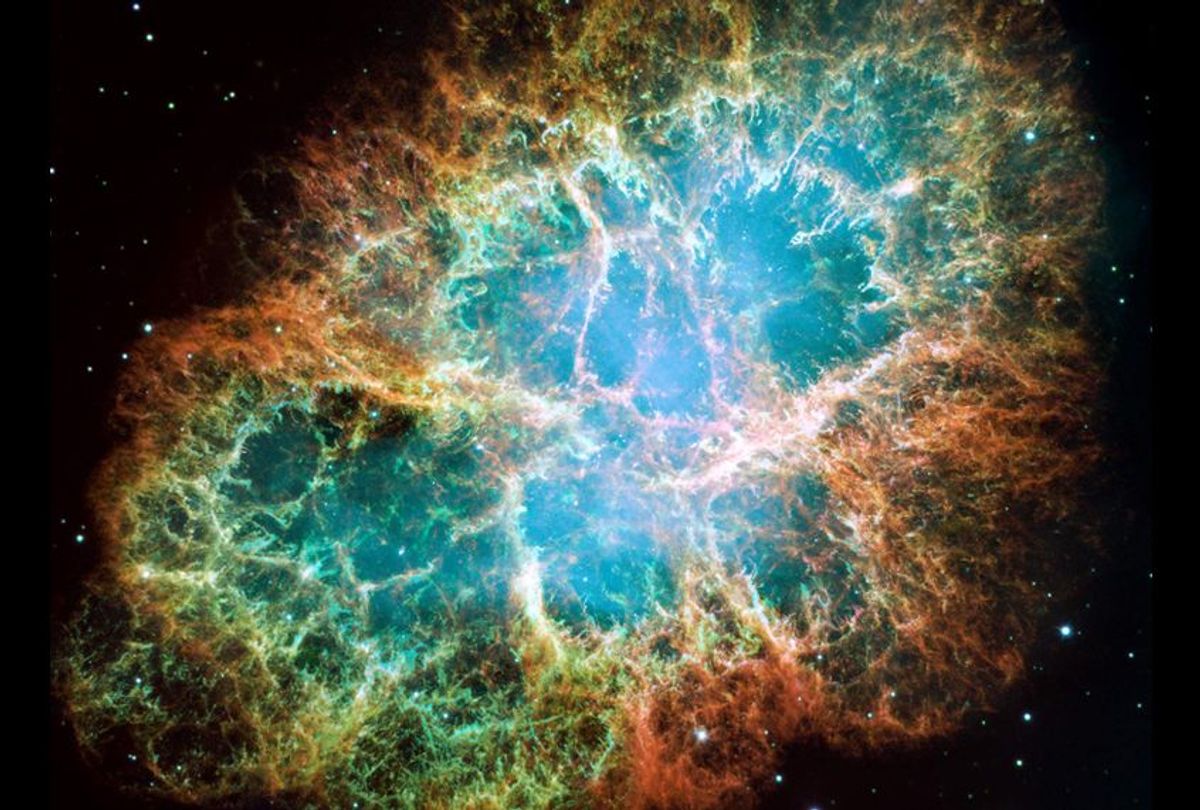 This image from NASA's Hubble Space Telescope shows the Crab Nebula, the remnant of a supernova explosion with a rapidly spinning neutron star embedded in its center. In October 2017, astronomers detected the merger of two neutron stars some 130 million light-years away. (Getty/NASA)
--

Astronomy is only possible as a field of study because the universe is so predictable. Just as plants and animals can be categorized into easily-identifiable species and families, stellar objects, too, appear with stark regularity — evoking the same visual patterns as a fern or a tree branch might.

Yet unlike some fields, astronomers also typify death — namely, the death of stars, which produce very specific types of massive explosions depending on the stars' properties. The aftermath of these explosions, known as supernovae, are so readily classifiable that they are called "standard candles," meaning observations of their brightness can be used to calculate distance.

Supernovae are rare events, and so energetic as to be detectable on Earth even when they occur in distant galaxies. Until recently, astronomers believed there were only two main types of supernova. Now, a new study published in Nature Astronomy surfaces exciting evidence that a third type of supernova exists. Known an electron-capture supernova, the newly-dubbed type was predicted nearly 40 years ago by astronomer Ken'ichi Nomoto, but only recently observed.

Intriguingly, the third type of supernovae was apparently hiding right under humanity's nose, as it was observed by millions of humans almost a thousand years ago. The Crab Nebula explosion in A.D. 1054 — which was widely recorded by astronomers and historians around the world — may indeed have been a rare electron-capture supernova, researchers claim. The timing of the new research paper is fortuitous given that next week marks the 967-year anniversary of the supernova explosion that created the Crab Nebula, first observed on July 4, 1054.

What's in a supernova?

Previously, astronomers considered two basic types of supernovae. The first, known as iron-core collapse, occurs when a heavy star's core has become saturated with iron created through the nuclear fusion of lighter elements. Once iron fusion starts, the star's core quickly grows dense beyond the point at which atoms can stably exist. At that point, the pressure pushes atoms' electron shells too close to their nuclei, causing them to spontaneously merge. This causes an uncontrolled reaction that compresses the core of the star into either a neutron star or a black hole, while the outer shell blows off at incredible speed.

The second type of supernova happens in binary star systems, in which a "dead" white dwarf star — which has ceased fusion, and is slowly cooling — steals gas from its active companion star as they orbit close. After accreting its neighbors' matter for years, the dead white dwarf star may spontaneously start fusion up again, which often triggers a supernova.

The oft-predicted third type, the so-called electron collapse supernova, was widely theorized but never observed. These involve massive stars that are fusing heavy metals in their core and which are just at the pressure limit at which some of their electrons start to be pushed into atoms' nuclei.

"There's this intermediate mass range [8 to 10 times the mass of the sun], where we think maybe we've seen stars that explode in this hypothesized way of electron capture, but we haven't really definitively observed it," said Azalee Bostroem, a graduate student and co-author of the paper, in a phone interview.  "This is the first time we don't have one or two pieces of evidence pointing to this being this predicted type of supernova, but we have all of these different pieces pointing to that."

As Bostroem explained, astronomers have long hypothesized that stars between 8 and 10 solar masses explode in a different way. That's because internal pressure theoretically could force the star's electrons to meld with atomic nuclei, turning negatively-charged electrons and positively-charged protons into neutrons. Since electrons exert a negative pressure on each other, this causes a decline in electron pressure; that makes the star's center collapse as the surrounding layers explode. A 2018 supernova, called SN 2018zd, matched the characteristics of this hypothesized type. That intrigued astronomers.

A missing link in the sky

"The term Rosetta Stone is used too often as an analogy when we find a new astrophysical object, but in this case, I think it is fitting. This supernova is literally helping us decode thousand-year-old records from cultures all over the world," said Andrew Howell, a staff scientist at  Las Cumbres Observatory (LCO), adjunct professor of physics at UC Santa Barbara and leader of the Global Supernova Project, in a news release. "In the process, it is teaching us about fundamental physics — how some neutron stars get made, how extreme stars live and die, and about how the elements we're made of get created and scattered around the universe."

SN 2018zd was first observed in 2018 by amateur astronomer Koichi Itagaki in Japan. Alex Filippenko, a professor of astronomy at the University of California, Berkeley, proceeded to obtain a Hubble Space Telescope image of the supernova and an official analysis followed. Filippenko compared the area of the sky where the supernova was observed to Hubble Space Telescope images of that same area and discovered the progenitor star in the galaxy NGC 2146, about 31 million light years from Earth.

"That was one of the key components that had never been done for other candidate electron-capture supernovae — they had never had a viable identified progenitor star, the star that explodes," Filippenko said in a news release.

As Filippenko alluded to, the new discovery also resurfaces the mystery of a supernova explosion that occurred in A.D. 1054. That supernova, which was famously mentioned in Chinese and Japanese records, was so bright that some astronomers recorded it as being visible during the daytime. The remnants of that supernova form the Crab Nebula today. Researchers now suspect that this supernova was an electron-capture supernova, similar to SN 2018zd.

If astronomers have long theorized this third type of supernova, why are we just confirming an observation now? In the phone interview, Bostroem emphasized that the timing has never been quite right.

Astronomers believe that SN 2018zd was first observed three hours after it exploded.

"Just the increased number of supernovae we're discovering really gives us a much better opportunity to find rare events like this,"  Bostroem said. "And so we definitely will continue to look for them and continue to collect data sets like this so that we can identify whether they are electron-capture or not."

Astronomers like Avi Loeb, the former chair of the astronomy department at Harvard University, are thrilled about this new paper. In an email, Loeb called it "novel and exciting."