The next insurrection: They don't have the votes, but they've got the guns

Republicans don't want an investigation of Jan. 6 — because they hope it will happen again. With more violence 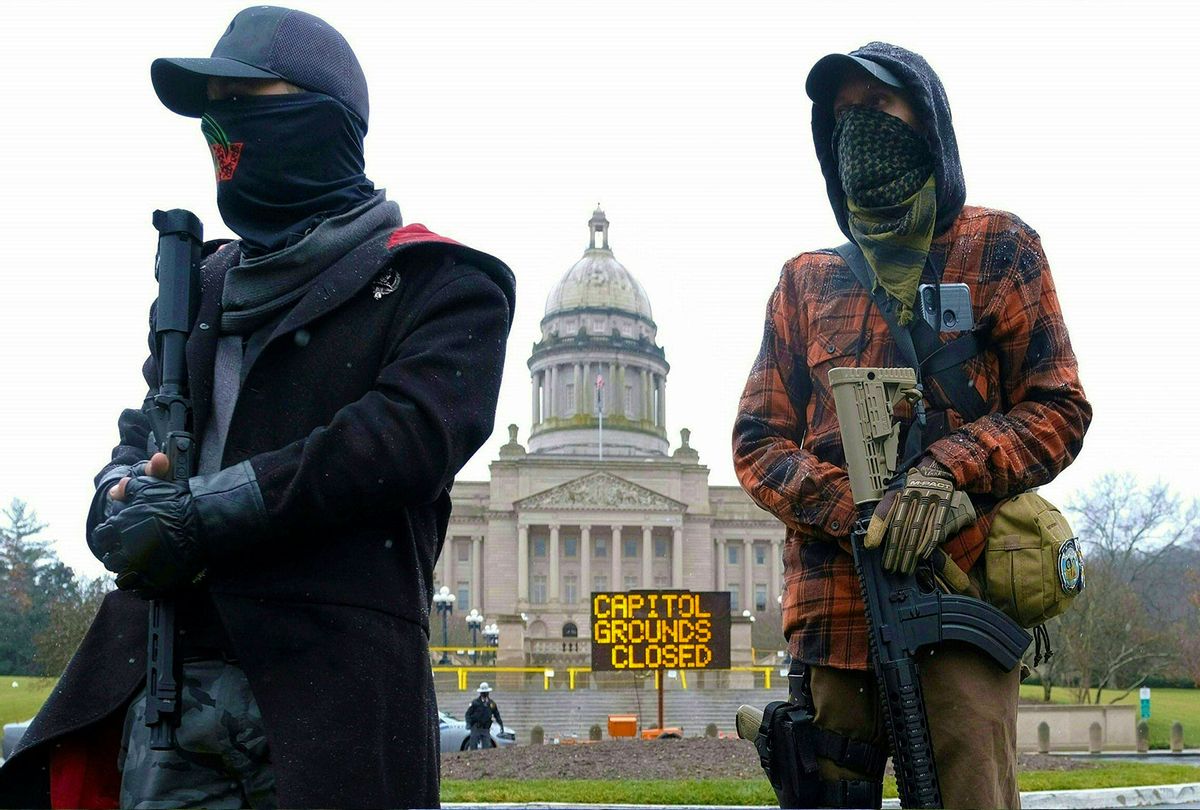 Members of the Boogaloo movement hold their rifles in front of the state capitol building in Frankfort, Kentucky, on January 17, 2021, during a nationwide protest called by anti-government and far-right groups supporting US President Donald Trump and his claim of electoral fraud in the November 3 presidential election. - The FBI warned authorities in all 50 states to prepare for armed protests at state capitals in the days leading up to the January 20 presidential inauguration of President-elect Joe Biden. (JEFF DEAN/AFP via Getty Images)
--

You want to know what has doomed Nancy Pelosi's attempts to get a bipartisan agreement to investigate the violent assault on the Capitol on Jan. 6? Every time she has talked about why we need a bipartisan commission or the select committee, she said they were necessary "so nothing like this will ever happen again."

Republicans aren't against investigating the Jan. 6 insurrection because they fear it will make them look bad. They're against doing anything to make sure that such an insurrection doesn't happen again.

The assault on the Capitol is already damaging to the Republican Party image, at least to outsiders. The Capitol was attacked by a violent mob of Trump supporters. It's doubtful there were any Democrats among them. The assault took place immediately after a Trump rally on the Ellipse and was incited by the then-president. Several Republican members of Congress joined Trump in addressing the crowd, along with other famous party stalwarts like Rudy Giuliani. It was a Republican rally with a Republican crowd. So was the mob at the Capitol.

Republican members of Congress know it was their supporters out there beating down the doors of the Capitol, ransacking the well of the Senate and looting congressional offices. Republicans don't want to investigate the violence at the Capitol because they want to leave the door open for it to happen again.

Most of them come from safe seats in Republican-majority congressional districts, many of them in Republican-controlled states. Republican senators, not all of them but most, come from Republican states in the South and Midwest. But every one of them can read census numbers, and every one of them understands that their days are numbered, even in states that have been Republican strongholds for decades, like Arizona and Texas. They saw the Election Day returns which showed previously Republican suburbs falling to the Democrats all over the country. They read the depressing voting numbers for millennials and younger voters that show them strongly leaning Democratic. Even a dull, lumbering beast like the Republican Party can tell when a water hole runs dry.

They can read the polls showing how popular Democratic issues are, including improved access to health care, the pandemic rescue bill, the infrastructure bill and the American Family Plan. How many calls have you heard Republicans make lately for repealing Obamacare? How many speeches have you heard them make saying we don't need to spend money on crumbling bridges, obsolete airports and ancient, failing mass transit like the Long Island Railroad or the Chicago Transit Authority or the Massachusetts Bay Transportation Authority? They don't dare oppose spending that is in any way grounded in reality. All they can come up with is screaming about "socialism" and "Democratic Party wish-lists," because their constituents drive across cracking bridges and commute on failing transit systems and pay a third of their income on rent and a third on child care and way more than they can afford on health care.

Electorally, Republicans are hanging on by their fingernails. In 2020, in the midst of the worst pandemic since 1918, before a single American had received a life-saving vaccination, with 230,000 already dead from the coronavirus and more deaths on the way, voters turned out in record numbers. And Republicans lost. They lost the White House. They lost the House of Representatives. After a runoff election, they lost control of the Senate. They did well locally in Republican-controlled states, maintaining control of state houses and governorships, but they lost ground in the areas where the country is growing. They lost the big cities. They lost the suburbs. They lost in population centers in the South and Midwest and West. They lost in the places where people are moving, where young people are getting jobs when they graduate from college, where many seniors are choosing to retire.

After the 2020 election, Gallup found in a December poll that 31 percent of Americans identified as Democrats, 25 percent as Republicans and 41 percent as independents. When independents were asked whether they were "Democratic leaners" or "Republican leaners," 50 percent said they leaned Democratic, and 39 percent leaned Republican. These were not good numbers for the Republican Party. Nobody knows better than Republicans that there are fewer of them than there are of us.

You've heard chapter and verse from me and others about how Republicans are passing voter suppression laws to make it more difficult for Democrats to vote. They know they don't have the votes. They don't have them now, and they'll have even fewer of them in the future.

That's why they've started to concentrate their efforts at the state level on laws that change how votes are counted and who counts them, moving the center of power from elected officials like secretaries of state and appointed officials like election administrators to state legislatures, inherently political bodies where the counting can be managed and controlled politically.

It's why they're clinging to Trump's lie that the election was stolen from him, and it's why their own efforts to "audit" the 2020 election results in places like Arizona are so shambolic and absurd. They know that if honest assessments are done of how the election turned out in battleground states, they will come to the same conclusions that a 55-page report by the Michigan state Senate did last week: There was no election fraud in the 2020 election. None. Zero. Nada.

They've been downplaying the assault on the Capitol, calling it "a normal tourist visit" as Rep. Andrew Clyde of Georgia did during a hearing a few weeks ago. He is among a growing number of Republicans in Congress who are making the case that nothing really bad happened on Jan. 6, so there's no need to investigate it. They blocked the creation of a nonpartisan 9/11 style commission to investigate the insurrection, and they're in the process of undercutting Pelosi's select committee by labeling it as a Democratic exercise in blame-laying.

Furthermore, they're absolutely right. When the select committee issues its report, it's going to lay the blame where Republicans want it least: on Trump for inciting the riot, and on their own constituents for committing insurrection against the government. And the select committee will likely produce evidence that Republicans are not interested in seeing in the light of day: detailed accounts of the violence committed by the mob and reports of the preparations some of the mob had taken that we haven't seen yet, such as evidence of weapons caches — and planning by some insurrectionists to use them.

Republicans don't want a report that basically comes out and says, Here's how close we came to a coup against our government, and here is what they are planning next. Laws that put partisan political bodies like legislatures in charge of counting votes make it much more likely that an upcoming election will end up in a political wrangle — not down in the states where the counting takes place, but in Washington.

Think about it: there were no controls whatsoever on that mob in Washington on Jan. 6. Estimates of the size of the crowd at Trump's rally on the Ellipse ran as high as 30,000. More than 800 rioters are estimated to have broken through police barricades and entered the Capitol, with as many as 10,000 outside. They outnumbered police by the thousands.

What if that crowd had been armed? What if instead of carrying iron pipes and bear spray and flag poles they had been carrying AR-15s and pistols? What if some of them were carrying the kinds of bombs that were found outside the Democratic and Republican headquarters? Capitol police couldn't stop them from overwhelming barricades and gaining entrance to the Capitol. Do you think they could have searched that mob for hidden weapons and bombs?

This is why Republicans don't want to see an intensive investigation of the insurrection on Jan. 6. If an investigation proves how bad the insurrection was this time, it might predict what will be possible if a mob of 100,000 or more assault the Capitol or other governmental buildings in Washington, and what that mob might be capable of if they're organized and armed next time.

The Republican Party has reached the point where it does not recognize the legitimacy of elections unless it wins them. Democratic political victories are per se illegitimate in Republican eyes. Republicans are lapping up their own lawlessness and ramping up the insanity. They are turning right-wing lunatics like Kyle Rittenhouse into folk heroes. He is the shooter in Kenosha, Wisconsin, who killed two people and wounded a third during Black Lives Matter protests following the police shooting of Jacob Blake.

Republican state legislatures in Oklahoma and Iowa have passed laws granting immunity to drivers who hit protesters with their cars during demonstrations on public streets. Multiple states already have laws allowing both open and concealed carry of firearms without a license, with more such laws on the way.

These are the kinds of laws that not only allow insurrection, but encourage it. The Proud Boys and the Three Percenters and the Oath Keepers and their ilk aren't the right's political fringe anymore. They are the Republican base — and the Republican future.