My witch-hunt history, and America's: A personal journey to 1692

Revisiting America's first witch hunt — and discovering how much of it was a family affair. My family, that is 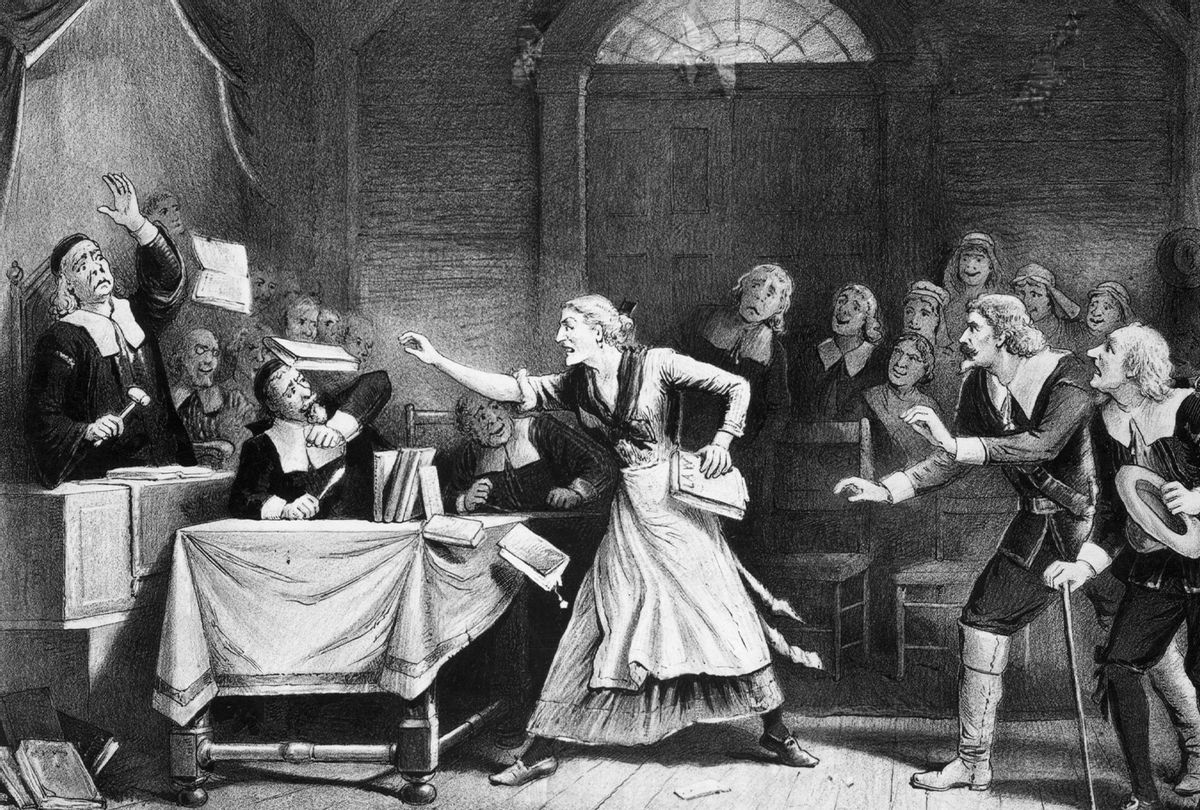 Last month, on the weekend of the summer solstice, I took my teenage kids to a place known as Proctor's Ledge, which today sits in a modest residential neighborhood on the outskirts of Salem, Massachusetts. It's not a completely unknown spot or anything: Google Maps will find it for you, and it's mentioned in a few of the more detailed guides to Salem and its distinctive history.

But Proctor's Ledge, both geographically and conceptually, sits well outside the tourist economy of downtown Salem, which is built around all sorts of tangential connections to the famous witch trials and even more so on unrelated epiphenomena, including ghost-hunting walking tours, a movie-monster museum and the present-day "witches" or Wiccans who have made Salem into their unofficial capital. There are various more or less valid ways to interpret what went wrong in the sparsely populated villages of the Massachusetts Bay Colony in 1692, but the theory that it had anything to do with spiritual practices or folk medicine or fortune-telling is pretty far down the list.

There's nothing to buy at Proctor's Ledge. There's no historical plaque to explain why the place is important. When we visited, on a sunny Sunday afternoon, there was nobody else there at all. It's a small hill or outcropping, about 30 yards behind the rear parking lot of a Walgreens store. Most of the hill is private property, but at some point the city of Salem bought a few hundred square feet of land facing the street and, after some years of civic hesitation, commissioned a modest memorial by landscape architect Martha Lyon, which was dedicated in 2017. Its primary element is a low, semicircular stone wall with 19 names and a series of dates inscribed on it at regular intervals. A few feet in front of the wall a lone gingko tree has been planted, with a motto carved at its base: WE REMEMBER.

That's a useful profession of faith, and in that context I found it very moving. But what we actually choose to remember, and what sense we can make of the past, is a question that hangs over all of history. Salem didn't want to remember the grisly details of its past for a long time, and only in the last decade have researchers arrived at a consensus: Proctor's Ledge is where 19 of the 20 people executed for witchcraft during the hysteria of 1692 were hanged. (The 20th was an 81-year-old man named Giles Corey, who was crushed to death beneath a pile of stones, a process that took three or four days. Toward the end, according to eyewitnesses, his tongue was forced out of his mouth. The presiding magistrate pushed it back in with his cane.)

In its simplicity and its refusal to explain itself, Lyon's memorial is a highly effective tribute to the inescapable physical reality of what happened in Salem. This quiet, nondescript place, which carries no discernible echo of the crimes committed there, creates an opportunity to contemplate one of the formative events of American history and the American consciousness, which struck some observers as a metaphor even while it was happening, and which remains poorly understood nearly 330 years later.

It's almost too easy to say that the Salem pattern of cruel but haphazard persecution, based on imaginary evidence, repeats itself throughout American history. Or to observe that those who protest that they are the victims of a "witch hunt" — one prominent contemporary figure comes to mind — are often the same people who inhabit a paranoid universe populated by limitless conspiracies and unseen enemies, and who make outlandish accusations supported by the modern equivalent of "spectral evidence," which the limited minds of normies cannot comprehend.

All that is clearly true, but I have personal reasons for perceiving the Salem witch hunt (as some historians also do) in more intimate terms, as an episode of communal self-destruction in which neighbors, friends and family members turned against each other, seizing on the most damaging accusations available in 17th-century Puritan society as a way to settle old grudges, avenge perceived injuries and wreak an especially vicious form of social justice.

Is it stretching the analogy too far to say that the same thing is happening now in American society — or at least in the American polity, which is not exactly the same thing — on a grand scale? Rather than seeing each other as combatants in the rule-bound and ritualistic arena of constitutional politics, so-called conservatives and liberals now perceive each other as irredeemably evil, each accusing the other of spreading pernicious lies, plotting to destroy democracy and abandoning shared tenets of "Americanism."

I'm not arguing that "both sides" are morally equivalent. They're definitely not, and everyone reading this will hold an opinion on who is good and who is evil. I'm saying that if we set that question aside for a moment, we can see more clearly that essential conflicts and contradictions about the nature of American community, which came to the surface in Salem and have done so again now, have in fact been present the whole time.

My kids and I went to Proctor's Ledge partly because of what didn't happen there. As my mother's family history has long maintained, and genealogical research has confirmed, we are direct descendants of Abigail Faulkner, something of a witch-trials celebrity. You can hardly be whiter than I am, but in a sense I'm a product of a mixed marriage: My father came to America from Ireland as a teenager, and I know very little about his grandparents beyond their names and the towns where they lived. My mother was an old-line WASP whose ancestry can easily be traced back to 16th-century England, and in some cases further than that.

Abigail's husband, Francis Faulkner, was one of the richest men in Andover, a few miles northwest of Salem. His parents are recorded as the first couple married in the Massachusetts colony, and his father Edmund had "purchased" the territory where Andover now stands from a Native American leader called Cutshamache, reportedly for "twenty gallons of rum and a red coat." (I do not believe I am responsible for the deeds of my ancestors, but I'm responsible for facing the truth about them. That account was not easy to read.)

Our family catches a break with Abigail's father, the Rev. Francis Dane, who was then the elderly pastor in the North Parish of Andover (today the separate village of North Andover) and by any standard one of the true heroes of that shameful episode. Francis had been educated at Cambridge before emigrating to America, at a time when relatively few colonists could read or write, and from the beginning he refused to take part in the witch hunt, arguing that "spectral evidence" was nonsense and that the confessions of accused witches were unreliable, since "the extreme urgency that was used with some of them … and the fear they were then under, hath been an inducement to them to admit such things."

As repayment for standing up against bullshit evidence and confessions extracted under torture, Dane himself and numerous family members were accused of witchcraft in what looks an awful lot, from a 21st-century vantage point, like a "populist" revolt against the "cultural elite." Dane's extended family, in fact, accounted for about one-third of all the people accused in Salem and Andover, although his daughter Abigail — my sixth great-grandmother, as genealogy software reckons these things — was the only close relative to be tried and convicted. (Another daughter, Elizabeth Johnson, and a daughter-in-law, Deliverance Dane, both confessed to witchcraft and accused various others.)

Abigail's name would surely be on the Proctor's Ledge memorial today if she hadn't been pregnant at the time. She remained in the Salem jail on a stay of execution while everyone else convicted in August and September of 1692 went to the gallows in the mass hanging of Sept. 22. By the time she gave birth to her son the following March — she named him Ammi Ruhamah, Hebrew names from the book of Hosea taken to mean "the mercy of God's people" — she and most other surviving accused witches had been released, the court that had handed down the death sentences had been recalled, and Salem and the surrounding communities had already begun the project of organized forgetting.

In researching this article, I've encountered several historical or genealogical accounts of prominent Salem and Andover families that pass over the events of 1692 as if they hadn't happened at all, or mention them only in footnotes as an irrelevant curiosity. I also learned what I should have suspected already, which is that my mother's family history, while understandably celebrating Abigail Faulkner and her father as illustrious forebears, had forgotten or repressed other connections.

The witch hysteria of 1692 took place in a small, interconnected community, whose members had only recently "acquired" their land from those who had lived there for centuries and were facing a certain amount of blowback. Native American raiders had burned down the house of Edmund Faulkner, Abigail's father-in-law, during King Philip's War in 1676. (There was certainly some justice in that, although that conflict ended in total catastrophe for the indigenous people of New England.) I am descended from, or otherwise related to, a great many of the white settlers who lived in that place at that time, and it's useless to pretend that any of them, or any of us, are innocent of that history.

I didn't know when we visited Proctor's Ledge that another direct ancestor, an eighth great-grandfather named Moses Tyler, was one of the principal accusers in Andover, personally responsible for sending several of the 19 convicted witches to their deaths. (The history of the Tyler family is too tangled to unravel here — but yes, I do have a theory: Moses was pursuing vengeance against those he believed had wronged his father.) I also didn't know that one of the people Moses sent to the gallows — working with, or through, his teenage stepdaughter Martha Sprague, one of the most ambiguous figures in this drama — was a 55-year-old widow named Mary Parker.

Mary was accused, tried, convicted and put to death within a span of three weeks, one of the eight people hanged in the mass execution of Sept. 22, 1692. (Said the Rev. Nicholas Noyes, presiding chaplain of the witch trials, "What a sad thing it is to see eight firebrands of hell hanging there.") Her case remains puzzling even by Salem standards, and some scholars have suggested she was the victim not merely of false testimony but also mistaken identity. Having looked into it a little, I doubt that's the case, but in any event where Abigail Faulkner was lucky, Mary Parker was disastrously unlucky.

Mary's name appears on the 15th of the 19 stones at Proctor's Ledge. Just a few days ago I put together clear evidence that she too was a direct ancestor, a fact not mentioned in any of the existing genealogical or documentary accounts of my WASP family. I suppose on our Sunday visit we paid tribute to her the best way we could, without knowing we were related. Because what, after all, does that really mean? 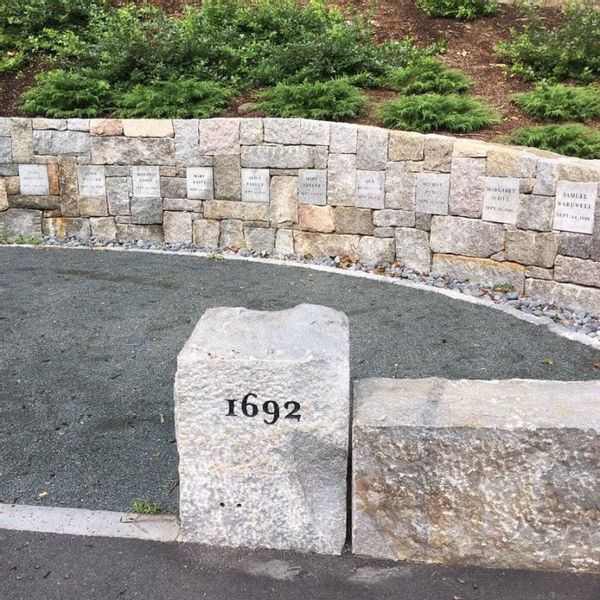