Most Democrats have gotten vaccine, but only 45% of Republicans — and the pandemic is still raging in red states 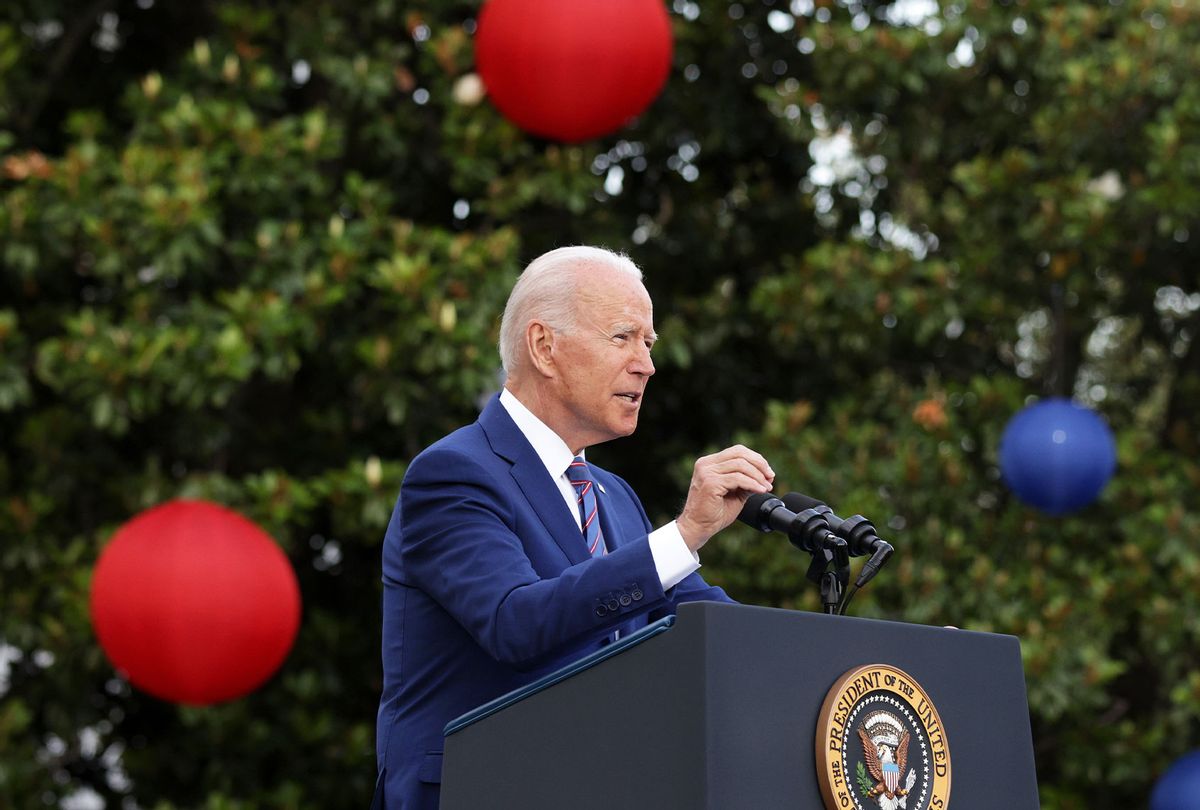 By most measures, President Biden got surprisingly close to his goal of 70% national vaccination by July 4 that he set early on in his administration's fight against the COVID-19 pandemic. We're reportedly now at 67%, which is pretty darn good, especially considering how little of a plan Donald Trump even pretended to have before leaving office. But the mainstream media, always eager to prove to conservatives (who will never believe them) that they're just as hard on Democrats as Republicans, pounced eagerly on this minor shortfall, running headlines focusing on this "failure" rather than the much bigger story of success.

"Biden heralds U.S. emergence from the pandemic, but he risks celebrating too soon," warns a headline at the Washington Post.

As the ABC News piece admits, this dour framing conceals a lot of genuine progress made against COVID-19, including "a 90% drop in deaths and hospitalizations since January." On July 5, the number of new reported transmissions was slightly more than 5,000, a small fraction of the cases seen at the January apex of the pandemic, when those numbers sometimes topped 250,000 a day.

Despite this success, however, it is indisputable that after months of watching the virus seemingly fade from the landscape, cases are starting to creep back up again. While many are eager to blame the CDC for rolling back mask-wearing and social distancing recommendations for vaccinated people, those who've gotten the shot are not the ones spreading this disease. The real problem is that the highly contagious Delta variant of the virus is tearing through parts of the country where people clearly would rather die than get an inoculation they associate with a Democratic president.

There are many reasons for vaccine hesitancy, of course, including conspiracy theories that are dissuading folks of all political persuasions. But if we pull back and look at the bigger picture, it's clear is that the main driver of vaccine rejection, by far, is plain old right-wing trolling. Trump supporters are so angry and bitter at Biden that they have weaponized their own bodies to sabotage his efforts to end the pandemic. Maybe it feels to them as if refusing vaccination is a good way to stick it to the liberals — who admittedly are exasperated by this behavior — the main result is that the pandemic is raging out of control in "red" areas of the country, while blue states and regions are getting back to normal.

Some sobering statistics: A new Washington Post/ABC News poll shows that while 86% of self-identified Democrats have gotten at least one shot, only 45% of Republicans have done the same. If it weren't for the high rates of inoculation among seniors, in fact, the proportion of vaccinated Republicans would be even lower. As it is, most of the unvaccinated Republicans currently say that they have no plans to get the shot.

The result, as Dr. Anthony Fauci, director of the National Institute of Allergy and Infectious Diseases, said on NBC on Sunday, is that the pandemic surge is a "regional" problem.  A new report from Johns Hopkins about geographical rates of COVID-19 underscores his point.

"States with below-average vaccination rates have almost triple the rate of new Covid-19 cases compared to states with above-average vaccination rates," CNN reports. In Arkansas, "where less than 35% of residents were fully vaccinated," the rate of transmission is roughly five times higher than the national rate. As the Washington Post reported over the weekend, only 3% of outbreaks are occurring in counties where more than half the population is fully vaccinated.

"To put it bluntly: Polarization is killing people," as German Lopez of Vox wrote on Tuesday.

To put it even more bluntly, Republicanism is killing people. On the Democratic side of the aisle, polarization is not a problem. If anything, it probably saved lives, because many Democratic voters made it a point of pride to get vaccinated as soon as possible. All 18 of the states that have surpassed Biden's 70% goal voted for him in the 2020 election.

The rising caseload of the last couple of weeks has caused some panic on liberal social media, with some folks clamoring for a return to lockdown restrictions and mask mandates. But considering that the only places with the political will to do such a thing are also the places where vaccination rates are high and virus transmission is low, that's probably not the answer. Returning to such restrictions in blue areas, while many red states continue to ignore the problem, is a little like putting a bandage on your left hand when the wound is on your right. It might feel like you're doing something, but it's basically useless.

Conservatives no doubt feel that refusing the vaccine feels like a good way to give the finger to liberals, a message that Fox News reinforces regularly and enthusiastically. But even some Republican governors are now admitting that actually, their own voters are the ones paying the price for valuing liberal-triggering over their lives, their health and their families.

"Politics is becoming religion in our country," complained Gov. Spencer Cox of Utah, a Republican, in a Saturday appearance on CBS, adding that "it's caused us to make bad decisions during this pandemic."

The Republican governor of West Virginia, Jim Justice, was even blunter on ABC, accusing people who aren't vaccinated of being in a "death lottery." He admitted that the reason people aren't getting the shot is they "are very, very conservative in their thinking," but added that "they're not thinking right."

Of course there's nothing inherently "conservative" about refusing to protect yourself and other people by getting vaccinated. This is only a problem because Donald Trump somehow convinced his supporters that refusing to take the pandemic seriously was central to their identity. To make things worse, Fox News, eager to find a way to sabotage Biden's pandemic efforts (and his entire presidency), has convinced its viewers that only hated liberals get the shot. So the vaccines have become aligned with vegan cookery, "critical race theory" or driving a Prius: Something Republicans are convinced is sinister and will somehow infect them with socialism.

As long as vaccination rates are tied up with media assessments of Biden's success as president, Republican voters — and the propagandists of right-wing media — will have an incentive to keep refusing the vaccine. They weren't quite able to steal the election for Donald Trump, but they can offer their own bodies up as sacrifices to keep the virus circulating in an effort to make Joe Biden look bad. But this problem falls outside Biden's power to fix. If anything, the harder he pushes people to get vaccinated, the more Republicans will dig in their heels and refuse. So it's time for the media to stop blaming Biden and put the blame where it squarely belongs: On Trump, on spiteful, embittered Republicans and on the right-wing media, which would rather kill off its own viewers than give a Democratic president a legitimate win.