Deluded by their Great Leader, many Americans won't get the shots — while the rest of the world begs for them 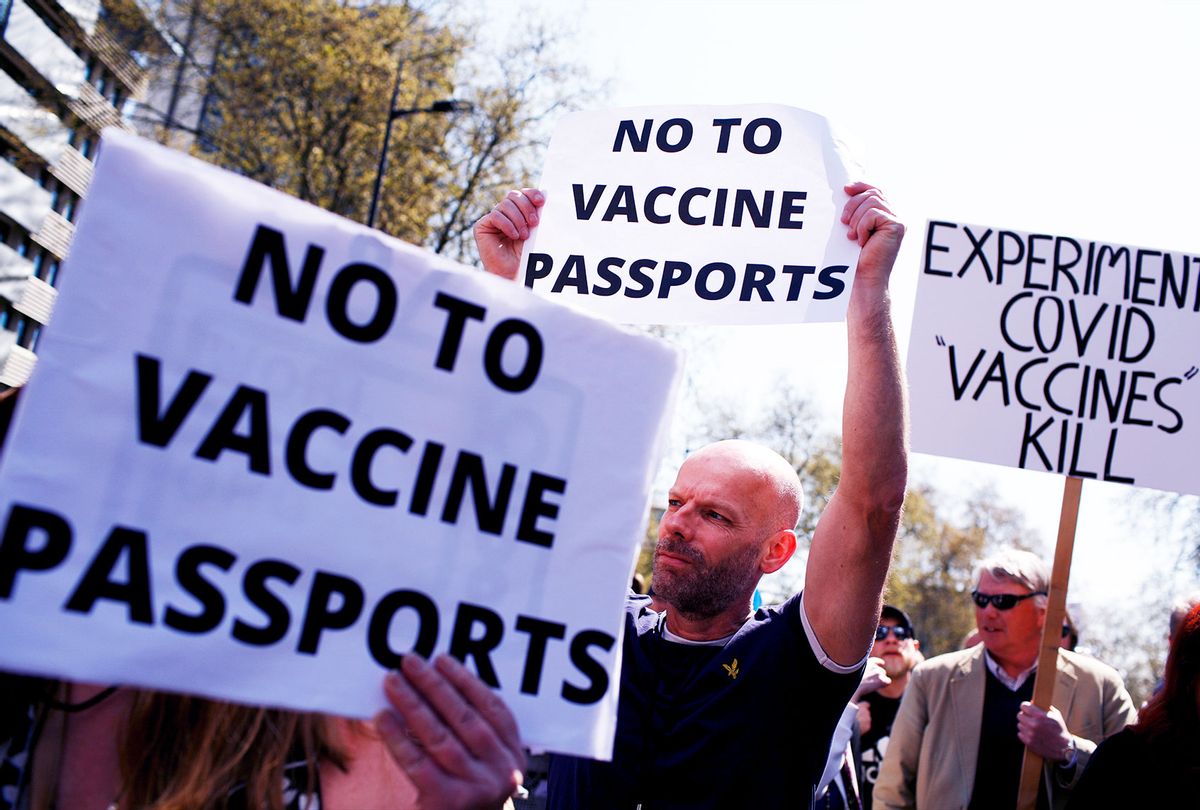 This is a welcome sign that the richest, most powerful country in the world can actually still do something. A year ago, after we watched the disastrous federal response to the crisis, I wouldn't have bet on that. But it turns out that despite the horrific malfeasance that led to more than 600,000 deaths, the big bet the Trump administration placed on the vaccines paid off. The Biden administration's much better grasp of how to make the government work as it should led to a rollout of the vaccines that managed to get a majority of adults vaccinated with at least one shot and created a system within weeks in which most people who are willing to be vaccinated have easy access.

These vaccines truly are a marvel of modern science. The MRNA technology underlying the Pfizer and Moderna vaccines was being developed before the pandemic hit, but that event supercharged their progress and brought them to the public in record time. Other vaccines using more traditional techniques came online quickly as well, in in all cases, efficacy and safety are beyond question. They are also free to everyone, which may be the most miraculous thing of all!

This is all such good news that it's simply mind-boggling that Donald Trump isn't out there touting these vaccines as the greatest accomplishment of his administration and exhorting his followers to rush out and get them immediately. Unlike 99% of his relentless boasting, it's not even a lie. Operation Warp Speed was a success. But of course he's not doing that.

Sure, Trump takes credit for the vaccines as if he had cooked them up himself in the White House kitchen, and frequently suggests that millions more would have died if not for him. But at Trump's recent rallies, his crowd doesn't cheer when he brings it up. If there's anything to which Trump is sensitive (and this is pretty much the only thing), he definitely notices not getting a good reaction from the crowd. Now he's trying to find a way to work both sides of the issue:

Unfortunately, millions of his followers were convinced by his behavior during his last year in office that COVID was not a crisis. No matter what he says today, they remain convinced that the virus was a political attack, a hoax or simply overblown, regardless of the monumental body count. And then there's the relentless disinformation campaign coming from right-wing media. Here's a little taste:

On Wednesday night this week, Fox News host Laura Ingraham interviewed a doctor who proclaimed that "unless we really have a compelling case, no one under age 30 should receive any one of these vaccines." That's the sort of dangerous fear-mongering conservative viewers see every day, even as thousands of them are still dying.

It appears that's about to get worse. We are seeing the beginnings of another COVID surge among the unvaccinated, and the largest cohort among them are Trump voters in red states with low vaccination rates. The Kaiser Foundation reported this week:

One of the main factors driving differences in COVID-19 vaccination rates across the country is partisanship. Our surveys consistently find that Democrats are much more likely to report having been vaccinated than Republicans, and Republicans are much more likely to say that they definitely do not want to get vaccinated. In May, just as vaccine supply was starting to outstrip demand, we examined average vaccination rates by county and found that rates were lower in counties that voted for Trump in the 2020 Presidential election compared to those that voted for Biden. Now, two months later, we find that not only does this remain the case, the gap has grown.

This is happening as the CDC reports that more than half the new cases in the U.S. are caused by the far more transmissible and deadlier Delta variant. It's spreading rapidly among the unvaccinated and many are getting severely ill. (The good news that the vaccines are still effective in preventing serious illness from this strain.) In Missouri, where only 40% of people are even partly vaccinated, the ICUs are filling up again. NBC News quoted one doctor there saying his patients are "shocked" when they end up in the hospital and many of them have regrets. He said many tell him "that they wish that they knew they were going to end up in the hospital this sick and they would have made a different choice and got the vaccine."

CNN recently reported on a Georgetown University study that found five undervaccinated COVID clusters in the South and Midwest which could put the whole U.S. at risk should a new variant arise within the human petri dish they are providing. According to the Atlantic's Ed Yong, most scientists agree that the longer the virus circulates this way, the more likely that is to happen.

These people are held captive by beliefs that make them vulnerable to a deadly disease and you have to feel some sympathy for that. But they are not just putting themselves in danger, and at this point there really is no acceptable excuse. This country is awash in vaccines, and we are so spoiled that millions of people have to be bribed into getting them — and even then many refuse.

Meanwhile, as Yong points out, the rest of the world is literally dying for them:

Of the 3 billion vaccine doses administered worldwide, about 70 percent have gone to just six countries; Delta has already been detected in at least 85. While America worries about the fate of states where around 40 percent of people are fully vaccinated, barely 10 percent of the world's population has achieved that status, including just 1 percent of Africa's. The coronavirus is now tearing through southern Africa, South America, and Central and Southeast Asia. The year is only half over, but more people have already been infected and killed by the coronavirus in 2021 than in 2020. And new variants are still emerging. Lambda, the latest to be recognized by the WHO, is dominant in Peru and spreading rapidly in South America.

The most sickening irony is that many countries that did so much better than the U.S. did in controlling the virus originally are now being battered by the stronger variants and can't get the vaccines. It is shameful that we have to beg so many Americans to do it.

I'm with Dr. Fauci on this one: