An A-Z guide of the most common types of apples

Get to know popular varieties of apples and then start baking, snacking, and more! 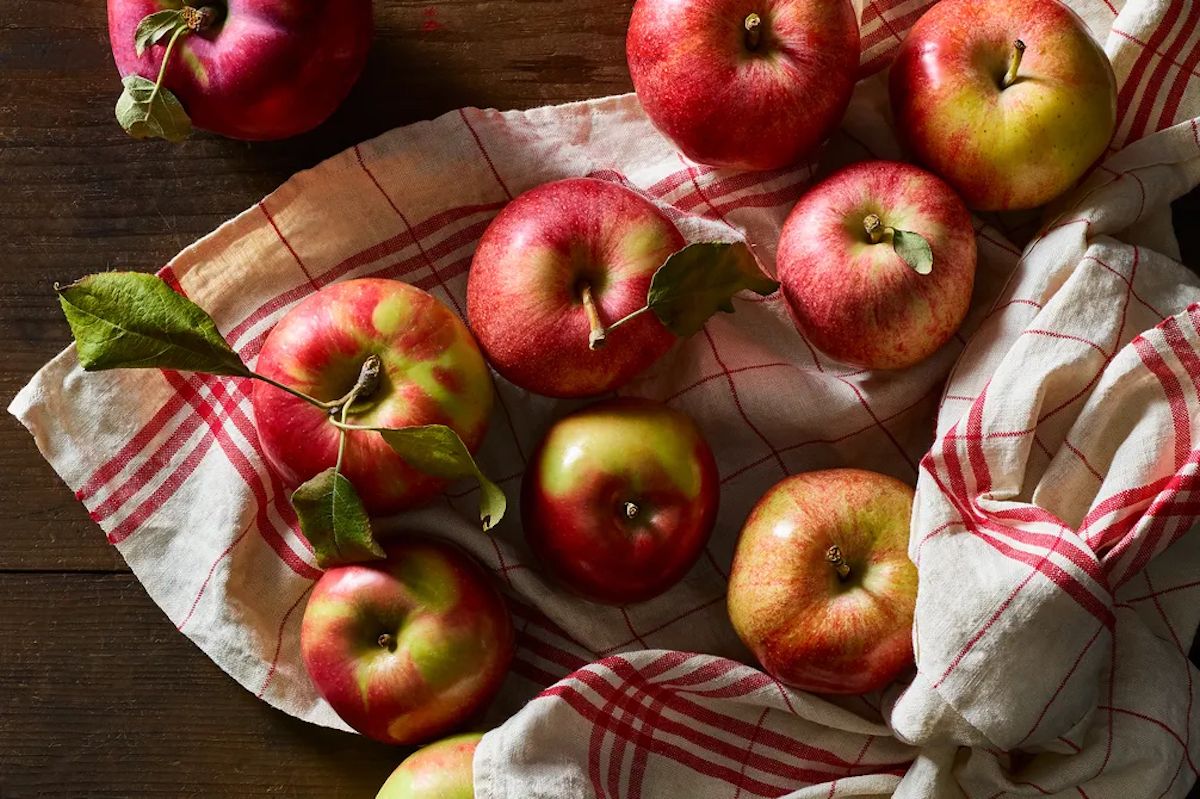 Apples and peanut butter are the ultimate energizing snack, and a steaming cup of cider makes us wish for days spent on a hayride, wrapped in a flannel blanket. Come fall, I'm all about apple pies, cobblers, crisps, galettes, pandowdies, cakes, applesauce, apple butter...do I sound like Forrest Gump yet? While a few apple varieties are accessible year-round, the full bounty is at its peak between late August and early November. Depending on factors such as the climate and growing conditions in a particular area, the specific time when these apple varieties are in season can vary year to year. There are hundreds (HUNDREDS!) of varieties of apples, with many that you and I have probably never even heard of because they are cultivated independently by small farmers. I could never adequately cover each and every variety, so here I'm focusing on the most common types of apples that you can find in grocery stores and pick each fall at your favorite orchard.

In each description, I share when exactly you can find these varieties at their peak. But if you're out for an autumnal day of family fun at an apple orchard and find that some types of apples are a little past their prime, don't just pass them up. Instead, grab a few of those slightly smooshed ones that other pickers are sure to ignore, bring them home, and make your own applesauce or mulled cider (the riper the better for these recipes!).

This popular commercial apple dates back to the 1950s in New Zealand but is wildly popular stateside. Braeburn apples have a very thick skin that is a vibrant red-to-orange hue. It's a great apple for baking and works well as a substitute for Pink Lady or Honeycrisp apples for pies, galettes, and other fall desserts.

Cortland apples are known for their rosy-blush skin, crisp texture, and white flesh. Bonus: They're slower to brown than other varieties, which makes them suitable for just about everything (snacking, baking, cooking, applesauce, and salads are all ideal). Once you take a bite, you'll fall in love with their slightly tart and tangy flavor. If you can, pick them at their peak in mid-September.

It's not the oldest variety or even the most popular, but it is certainly the most talked about in recent years. The Cosmic Crisp apple is a crossbreed of Honeycrisp and Enterprise apples that was first cultivated in 1997 by researchers at Washington State University. More than 20 years later, this apple, which was bred to have a remarkably sweet, juicy bite, is out of the lab and available in the produce department of grocery stores nationwide.

The definitive big apple, Empires are delicious, sweet apples that are just as enjoyable for snacking as they are for baking and cooking. One bite and you'll be transfixed by their texture, which is somehow both a little creamy and a little crispy. Their skin is a deep red that looks stunning fresh or cooked down and baked into a pie.

These sweet, slightly tangy apples are firm in texture but have a slightly grainy quality. They're great for snacking and can work for some sweet and savory recipes, but they tend to become a little mushy when cooked. When you're making applesauce, choose Fuji apples, but for some other baking projects like pies and cobblers, stick to a variety that is more likely to hold its shape in the oven.

This early fall riser is juicy and firm with a slightly sweet, tangy flavor. In the last few years, Gala apples have become one of the most popular and highly cultivated varieties, though they have been around since the 1930s.

The first yellow apple that you probably ever tried—and certainly the most common that you'll find in grocery stores—is Golden Delicious. The vibrant yellow skin is like sunshine on a produce shelf, and the flavor is sweet as can be. Use Golden Delicious apples for any and all recipes, plus snacking, too. Fun fact: This variety dates back to 1890!

Love them or hate them, everyone is familiar with Granny Smith apples. This super-tart, crisp variety features a bright green skin and mouth-puckering flavor. They're best for baking, as their acidic quality is offset by plenty of butter and sugar. They're one of the last apple varieties to peak; pick them at the end of October.

Honeycrisp apples have a complex flavor that is both sweet and juicy. The crunchy flesh is fabulous when eaten fresh, but you can also bake with this apple variety. Applesauce, apple cakes, pies, roasted apples, and more are all up for grabs.

Despite its name, Ida Red apples do not have an incredibly bright red skin. It's somewhere in between a pale red and green hue. Inside, the flesh is firm and crisp and tastes sweet and tart when you eat it fresh.

Jonagold apples are an underrated variety that are a cross between Golden Delicious and Jonathan apples. They were cultivated in 1953 at Cornell University's College of Agriculture and Life Sciences and feature a smooth thin skin that is light pink.

Macoun is a cultivated apple that's a cross between the classic McIntosh apple and Jersey Black, the latter of which is an heirloom variety that dates back to 1817. Macoun apples were later introduced in 1923, and today, they are widely known as a popular eating apple that offers hints of warm, spiced flavor in its sweet-tart flesh. They're generally at their peak in late September.

One of the most popular apple varieties, McIntosh is prized for its ability to transform into applesauce, but its sweet, aromatic flavor is fabulous in pies, salads, and other savory recipes, too. It was discovered by its namesake, John McIntosh, back in 1811 and still reigns supreme. Look for them in early-mid September (though they're available year-round in grocery stores, too).

Also known as Crispin apples, this super-tart green apple is similar to Granny Smith apples and is the best choice for salads and slaws due to its crisp texture and tangy flavor. It's native to Japan but can be found among orchards across the United States come October.

Pink Lady apples, aka Cripps Pink, are prized by bakers for their sweet-tart flavor, crisp texture, and thick skin that holds up well when cooked in the oven with sugar, cinnamon, and lemon juice (you know, the works) for the perfect old-fashioned apple pie.

Red Delicious apples have a varied red color and a round shape that becomes particularly plump when grown in the eastern region of the United States. It dates back to 1872 and remains one of the most popular varieties of apples. You'll know it by its thick, shiny skin that's a deep red color—a standout among some more muted red-green apples. PIck it in early October.