"They were peaceful people, these were great people ... the love in the air, I’ve never seen anything like it” 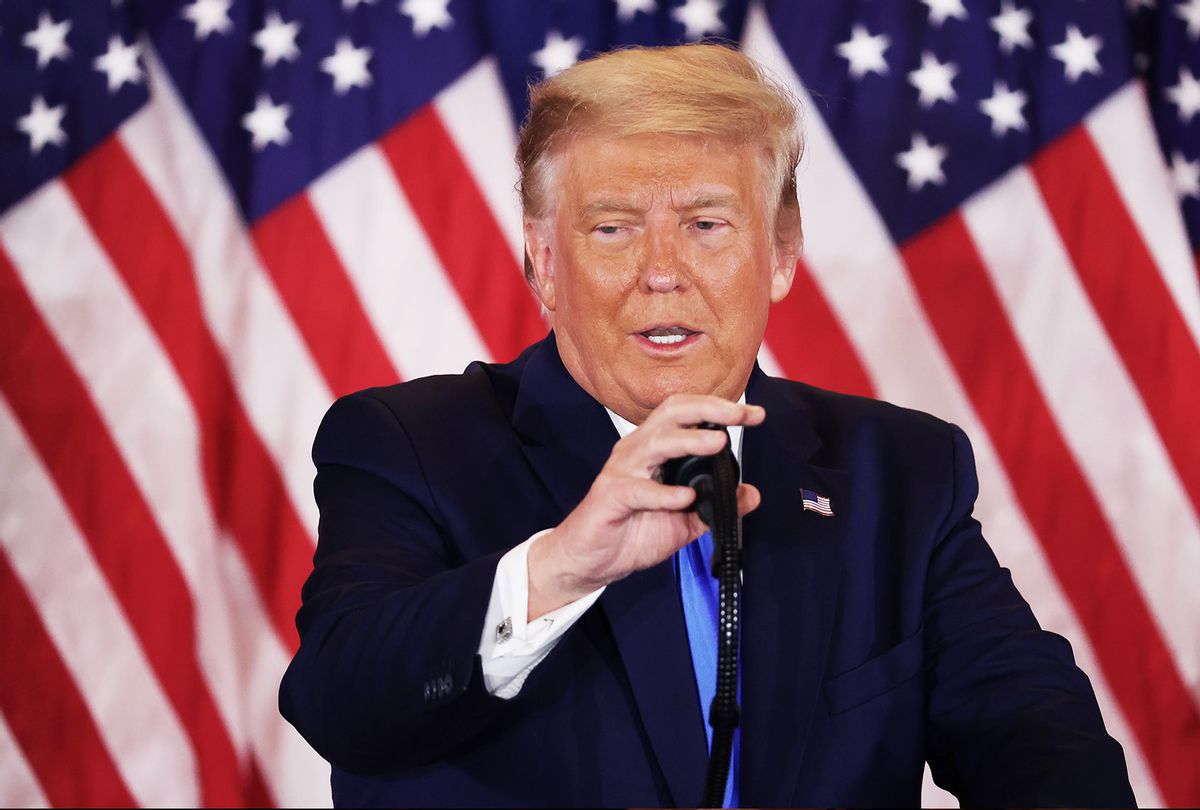 Donald Trump used a Sunday morning appearance on Fox News to rewrite the history of Jan. 6 and speculate wildly on the identity of the officer who fatally shot Ashli Babbitt, with almost no pushback from host Maria Bartiromo.

The segment came just hours before Trump is slated to headline the Conservative Political Action Conference (CPAC) in Dallas, Texas, and featured a nod to the former president's 2024 ambitions.

"I absolutely know my answer, and we're going to do very well and people are going to be very happy," he said when asked about whether he was officially running, noting that he couldn't officially announce anything due to campaign finance regulations.

Trump's appearance was supposed to cover his recent (and likely futile) lawsuit against several social media companies, though the conversation quickly shifted to Trump's demonstrably false claims of a "rigged" election — claims that Bartiromo fueled by suggesting Georgia's 2020 election results would soon be overturned, citing one article in the far-right publication The Federalist. Georgia has already conducted a full hand recount of its election results and completed an audit, making any changes to its already-certified results incredibly unlikely.

During the call-in interview, the former president also offered a full-throated defense of the rioters who breached the U.S. Capitol building and incited violent clashes with police and security forces, evoking memories of his defense of the white nationalist protesters who gathered in Charlottesville, Virginia, in 2017. Rather than a violent insurrection, Trump instead sought to recast the day as one of "peace" and "love" following his "mild-mannered" speech.

"There was such love at that rally," he said, "They were peaceful people, these were great people, the crowd was unbelievable and I mentioned the word love, the love in the air I've never seen anything like it."

Both Bartiromo and Trump worked during the segment to cast Ashli Babbitt, the rioter who was shot and killed by a Capitol police officer on Jan. 6 while climbing through a broken window, as an innocent victim. In recent weeks the Air Force veteran and conspiracy theorist has become a cause célèbre in far-right circles, as pundits and politicians attempt to paint her as a martyr whose death must be avenged.

Trump also parroted his supporters' calls for the officer who shot Babbitt to be identified — after an investigation found the shooting was justified and prosecutors declined to file any charges in the case.

"Who is the person who shot an innocent, wonderful, incredible woman?" Trump bellowed. "Who shot Ashli Babbitt? People want to know. And why?"

Bartiromo then began a particularly wild diatribe in which she appeared to insinuate that the head of Chuck Shumer's security detail was the officer in question.

"There is speculation that this was the security detail and a leading member of Congress security detail, a Democrat," Bartiromo said. "I want you to know that my team reached out to Sen. Chuck Shumer's office to check on what he may know about who shot Ashli Babbitt."

The longtime Fox host also asked Trump about his widely reported phone call with Kevin McCarthy on Jan. 6, in which the House Minority Leader was reportedly "furious" with Trump for refusing to call off the rioters and denounce the violence. Trump, for his part, replied that he was comfortable not answering Bartiromo's question because McCarthy will likely be called to testify in front of Congress' select committee investigating the insurrection.

"No, I don't have to, because Kevin will speak and I'm sure Kevin will be very good from that standpoint," Trump said.