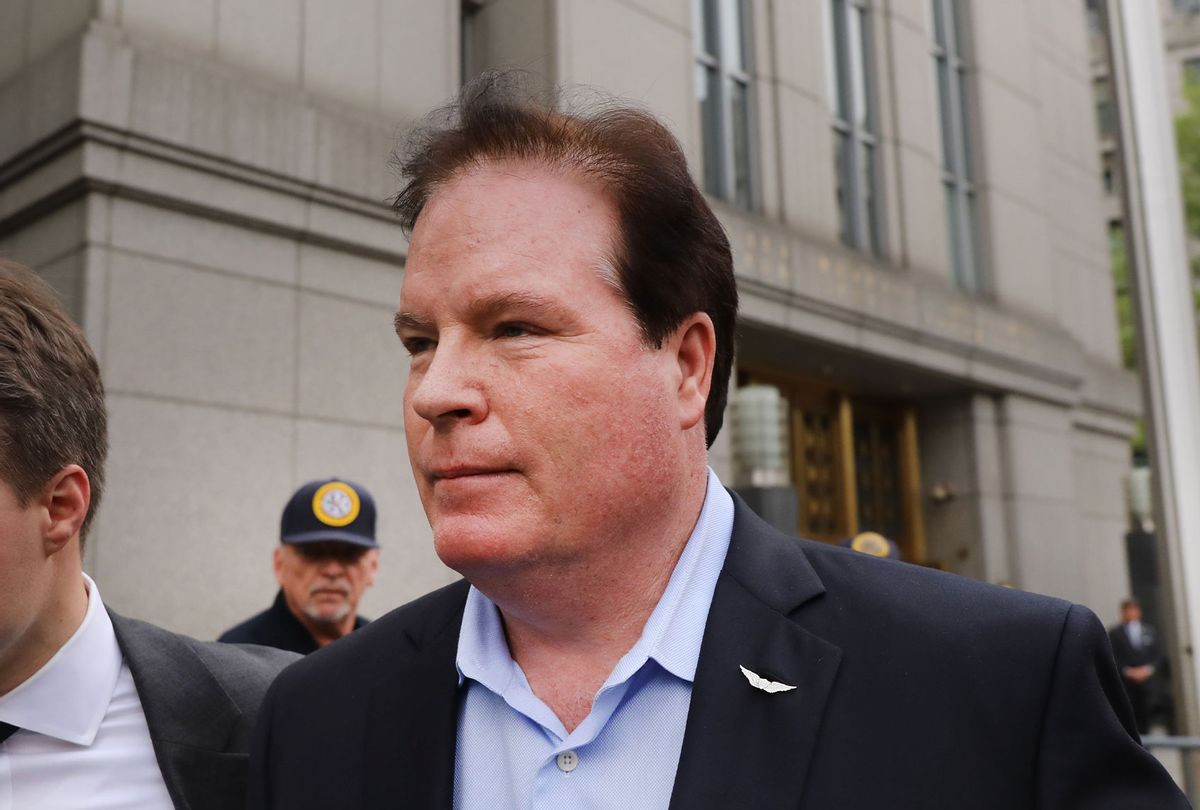 Stephen Calk walks out of a Manhattan court house after posting bail on charges of bribing former Trump campaign chairman Paul Manafort on May 23, 2019 in New York City. Manhattan federal prosecutors unsealed an indictment on Thursday charging Calk, a banker, with using $16 million in loans in order to bribe Manafort get him a position in President Donald Trump’s administration. (Spencer Platt/Getty Images)
--

A former Chicago bank executive was convicted Tuesday on charges that he bribed former Trump campaign chairman Paul Manafort in an effort to land a top job with the Trump administration.

Prosecutors said Calk was "hungry for power" and helped approve $16 million in loans for Manafort despite numerous red flags "in an effort to secure a personal benefit, namely to an appointment as Secretary of the Army, or another similar high-level position in the incoming presidential administration." Prosecutors said Calk provided a list to Manafort with positions he wanted, starting with Treasury secretary, deputy Treasury secretary, commerce secretary, defense Secretary and 19 high-level ambassadorships.

"Calk was the one with the money," prosecutor Paul Monteleoni told the jury on Monday. "What Manafort offered to Calk was the chance to use some of that money to buy power."

Calk was ultimately never offered a job of any kind in the Trump administration. Furthermore, his bank lost millions when Manafort defaulted on the loans, which he needed to avoid foreclosure, according to CNN.

Calk's attorney argued that he believed the loans would be profitable and alleged that it was Manafort and a loan officer at the bank who defrauded the company by lying about Manafort's wealth, according to the Wall Street Journal. Prosecutors told the jury that Calk pushed to approve the loans even though Manafort was already in debt and had properties in foreclosure.

"No matter how many problems [emerged] the loans just would not die. Why not? Because Calk wanted them to close," Monteleoni told the jury. "Calk had corrupt intent because he gave Manafort such special treatment. And he did it with both eyes open. So the idea that everyone else was moving alone forward and keeping things from Calk is 100% backwards. Calk was deep in the weeds on this loan."

Manafort appointed Calk to the Trump campaign's Economic Advisory Council days after his first loan was approved in 2016, where he served as a surrogate for the campaign. Calk told Manafort on election night that the bank could approve a second loan despite multiple "red flags," according to text messages presented at the trial.

Scaramucci, who along with Trump's son-in-law Jared Kushner was part of a team overseeing sub-Cabinet level appointments, said he did not know Calk but "wanted to be helpful" to Manafort.

Paul Schoeman, Calk's attorney, did not dispute that Manafort pushed for an interview but insisted his client was innocent.

"Yes, Steve Calk was personally involved in making loans to Paul Manafort, and yes, Steve Calk, got some help and advice from Paul Manafort applying for a government job that he did not get," he told the jury. "But what the government didn't prove is that Mr. Calk thought at the time that he was doing these things that he was doing something wrong, something corrupt, something evil. They haven't shown you that he wasn't acting in good faith trying to make loans that he thought were great for his bank."

Schoeman argued that many administration officials lacked experience and that Trump liked to hire people he saw defend him on television, which Calk did as an unpaid surrogate.

"What really matters to Donald Trump is how you do on TV and Mr. Calk did well on TV and maybe that would put him in a position, just like Mr. Scaramucci was good on TV and he got a White House position," he said. "And it's not like the Trump cabinet was full of all these you know, government, you know, longtime government people."

Despite Schoeman's claims that his client acted in good faith, the dealings quickly drew concern inside the bank. Retired Army Lt. Gen. Randall Rigby, then a director at Federal Savings, said in grand jury testimony released last month that he quit after learning about the arrangement.

"After he told me he was a candidate to be secretary of the Army, I said to myself, 'Looky here, here's what's going on, perhaps he made this loan because Manafort could help him get a position,'" Rigby said in March. "And it didn't look good to me. I just didn't want to be a part of that."

The dealings between Calk and Manafort became public during Manafort's federal trial in Virginia. Manafort was convicted of numerous fraud charges but jurors in that case deadlocked on four counts of bank fraud and conspiracy related to the loans from Calk.

Manafort later pleaded guilty in a separate trial in Washington. D.C., where he admitted to conspiring with Calk to commit bank fraud. Trump ultimately pardoned Manafort in December.

Calk, who is free on bail, is scheduled to be sentenced in January, though Schoeman suggested he may appeal the verdict, according to Bloomberg News.

"Calk used the federally-insured bank he ran as his personal piggybank to try and buy himself prestige and power," Manhattan U.S. Attorney Audrey Strauss said in a statement after the verdict. " Today's verdict sends the message that corruption at the highest levels of federally regulated financial institutions will be prosecuted by this Office."