Want to bring bipartisanship back? End the filibuster now 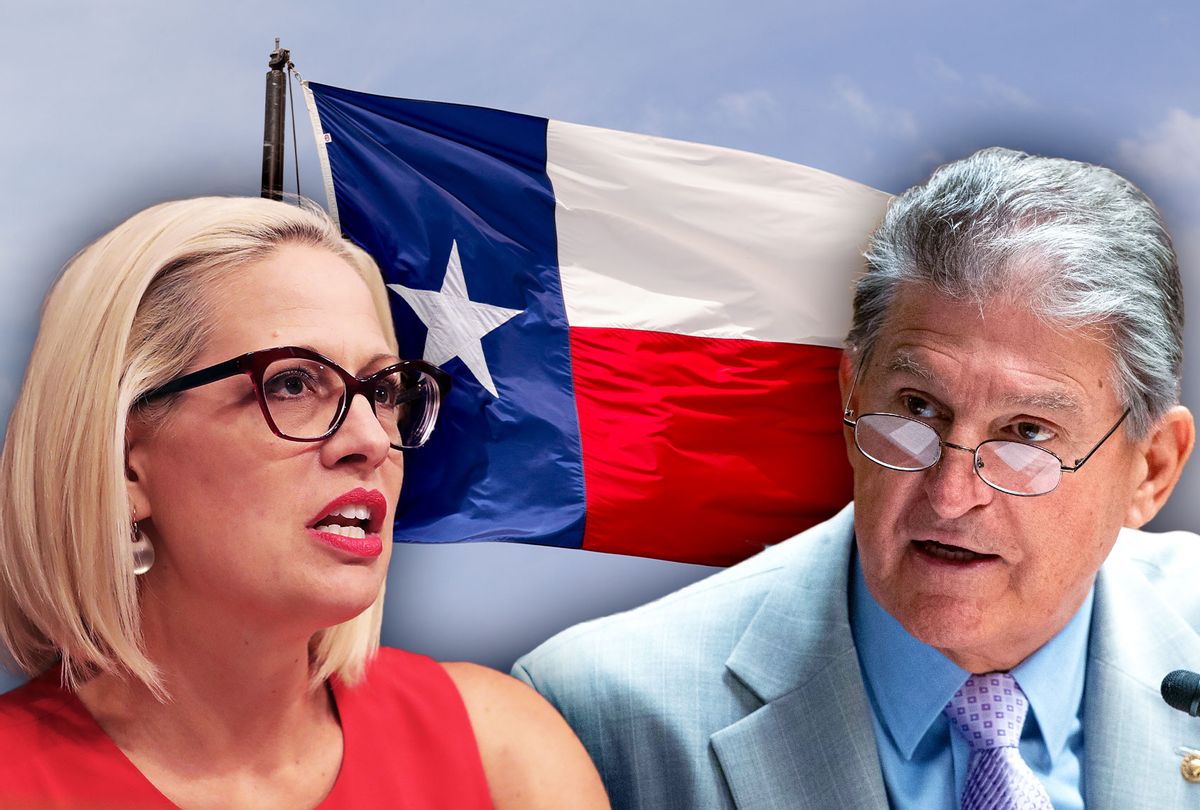 Monday night, Democrats in the Texas state legislature were forced to flee. Again. Republicans who control the state legislature and the governor's mansion have called a special session for the purpose of passing laws meant to make it difficult for residents in racially diverse cities to vote. The only way to slow them down is for Democrats to leave the state and deny Republicans the quorum necessary to have a vote. As they did over Memorial Day weekend, when they fled the first attempt by Republicans to crack down on voting, Texas Democrats held a press conference to shame Sen. Joe Manchin of West Virginia and Sen. Kyrsten Sinema of Arizona, the two Democratic holdouts who refuse to let a democracy reform bill be put up for a vote in the Senate, into changing their minds.

"We need Congress to act now to pass the For the People Act and the John Lewis Voting Rights Act to protect Texans — and all Americans — from the Trump Republicans' nationwide war on democracy," the Texas Democrats said in a statement.

Both Manchin and Sinema claim to support voting rights, but so far, they refuse to take the votes necessary to end the Senate filibuster, an arcane Senate procedure that is more the result of an accident than a legitimate tool, that Republicans are using to block democracy reform bills. Both Senate Democrats claim the filibuster is important for the vague purposes of "bipartisanship," even though its main use is for Republicans to unilaterally shut down all debate and refuse to come to the bargaining table with the slim Democratic majority in the Senate.

The situation in Texas, however, underscores how backward the Sinema/Manchin theory of bipartisanship is.

Right now, Republicans on Capitol Hill have absolutely no reason whatsoever to haggle in good faith with Democrats on anything. That's because a combination of gerrymandering, voter suppression and pre-existing anti-majoritarian provisions in the constitution have made it so that the votes of white conservatives, who are a minority of Americans, count for more than the votes of the more racially diverse and cosmopolitan majority. Indeed, the growing disproportionality is eye-popping. The Senate is split 50-50 between Democrats and Republicans, but those Democrats represent 41 million more Americans than the Republicans do. Republicans have controlled the Senate for most of the past two decades, even though Democrats have represented more people since 1996. Republicans lost the popular vote in all but one of the presidential elections since 2000 but managed to win half the time anyway. Even though Democrats likely get more votes, the math suggests that Republicans can gerrymander their way to controlling the House in 2022.

Because the vote of a white conservative counts more, on average, than the vote of any other American, Republicans believe they have no real need to appeal to or work with anyone else. That means they have no incentive to moderate, cooperate, compromise, or do anything but obstruct Democrats in power and work, as they're doing in Texas, to make sure that Democratic majorities are permanently blocked from choosing their own leaders. The filibuster, therefore, doesn't work to smooth the way towards bipartisan compromise — it prevents it. Republicans, with the filibuster, have unilateral power to stop all real negotiation and debate as they amass so much illegitimate power that they never have to answer a Democrat's phone call again.

Republicans don't even bother to hide that their strategies are all geared towards obstruction and refusal to compromise on anything.

Senate Minority Leader Mitch McConnell calmly declared in May that "100% of my focus" is on obstruction and that he has "total unity" from the GOP caucus on that goal. Texas Republican Rep. Chip Roy was recently caught on tape explaining to donors that "for the next 18 months, our job is to do everything we can to slow all of that down to get to December of 2022," and that all Republicans offer to Democrats is "chaos and the inability to get stuff done." In another recently leaked video, House Republicans can be seen laughing at what fools Manchin and Sinema are to think the filibuster serves any purpose but giving Republicans the ability to turn their noses up to the negotiating table.

If Manchin and Sinema want to return to the supposed glory days of bipartisanship and cross-party negotiation, they have the power to make that happen. They must vote to nuke the filibuster. Then they must start passing bills like the For the People Act and the John Lewis Voting Rights Act, legislation meant to protect the right to vote and stabilize election systems so that Republicans cannot cheat their way towards more illegitimate power, with a simple majority vote.

This will work for two reasons. First, if Republicans are forced to compete in fair elections, instead of coasting to victory on the backs of an authoritarian minority, it will have a moderating influence on the party. They'll have to appeal to voters who want more moderate candidates, instead of merely blocking such people from voting at all. If they can't gerrymander districts to render the Democratic majority permanently disempowered, they will have to do more to work with Democrats to get things done.

Second, and just as importantly, ending the filibuster forces Republicans who are currently in Congress back to the negotiating table.

Right now, Republicans have near-absolute power to block not just bills but even debate on bills. So it's not just that almost no bills pass, but that bills have no chance of even being debated. There's no opportunity for bipartisan compromise and discussion because bills die long before that's even an option. But if bills were moving to floor debate and a vote, Republicans could actually weigh in and negotiate with Democrats, through the processes that they are currently halting with the absolutist use of the filibuster.

Texas Democrats have shown how to get Republicans to negotiate: You have to do more than ask nicely.

When Texas Democrats fled to deny Republicans quorum in May, that not only slowed down the assault on voting rights, but it forced Republicans, reluctantly, to strip out two unpopular provisions from the original bill: One to block "get out the vote" events at churches and one to give right-wing judges the ability to overturn election results they don't like.

But ultimately, the plight of the Texas Democrats are what national Democrats will be facing, if they don't take measures now to protect voting rights and fair elections. Democrats in that state represent nearly half the voting population — Donald Trump only got 52% of the vote in 2020 — and there's long been hope that Texas could be turned blue. But Republicans have an iron grip on power, not because they have strong majorities, but because they shamelessly gerrymander and vote suppress their way to dominance. And the legislature answers not to moderates, but only to far-right radicals, because Republicans who control the state have no incentive to compromise or negotiate. The only time they pay attention to what anyone else wants is when they are forced, such as by Democrats fleeing the state.

Manchin and Sinema have, so far, been unmoved to end the filibuster by appeals to decency or common sense. But they do love bipartisanship, far more than they care about voting rights or democracy. Unfortunately, the same thing standing in the way of democratic reform, or even a sensible infrastructure bill, is the same thing standing in the way of true bipartisanship: The filibuster. If they want to return to the world of drinks and deal-making with Republicans, Sinema and Manchin have to make it worthwhile for Republicans. And that requires ending the filibuster and making democracy competitive again.