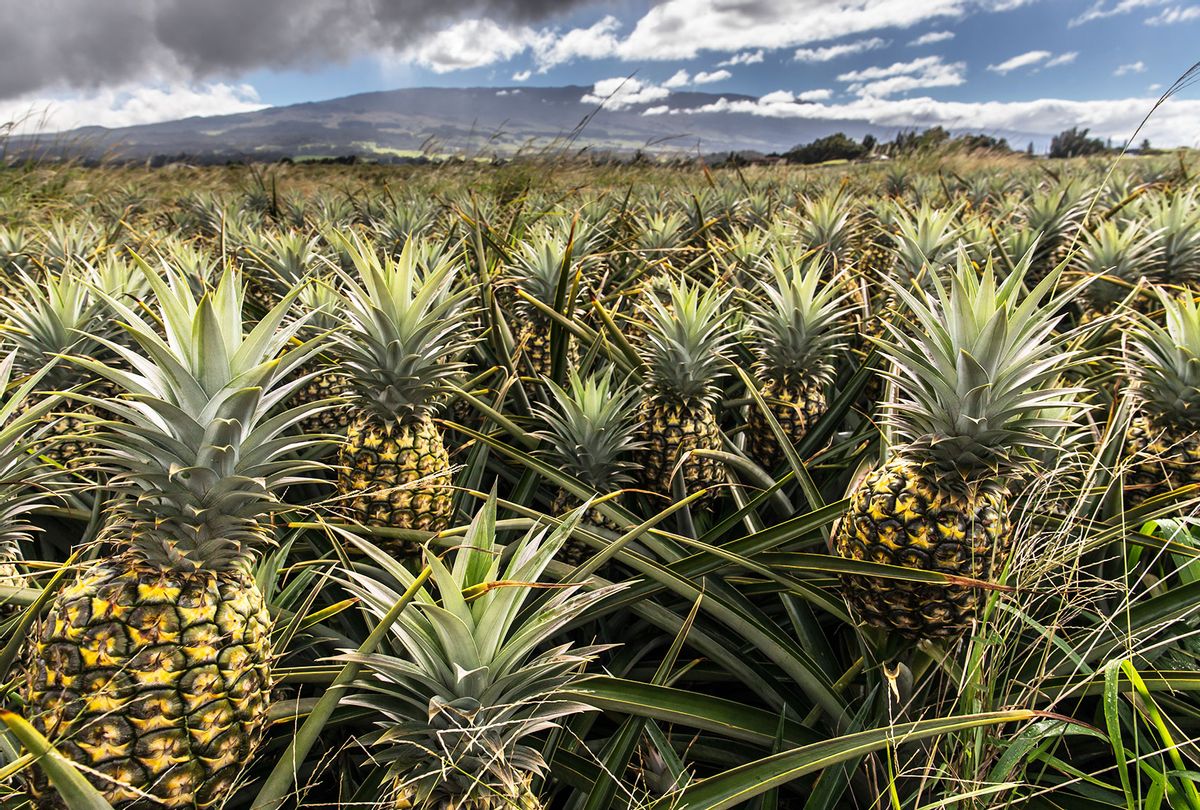 When COVID-19 hit the United States, areas all over the country saw their supply chains go haywire. School cafeterias, restaurants, airlines and conference centers lost their customers. Farmers, ranchers and fishers were forced to figure out how to reach people where they now were: at home. In the Hawaiian islands, where tourism makes up nearly a quarter of the economy, the disappearance of visitors meant that local growers, who had fought so hard for their piece of the food economy, had to scramble to connect with locals when their resort and hotel customers disappeared.

Facing empty grocery shelves, consumers also scrambled to connect with local producers. Despite Hawai'i being very well suited to grow a wide variety of foods, roughly 90% of the state's food is imported. Agriculture on the islands focuses on export business, commodity crops like corn seed and forestry. Local farmers, who have struggled to compete and had little governmental support in the past, suddenly found themselves a vital part of the food system. The COVID-19 pandemic brought the island's supply chain challenges to the forefront, and showcased how some farmers and local food advocates have been working to make the local food system in Hawai'i more resilient.

Seeing into the future

Since the mid-19th century, when Americans began planting sugarcane and pineapple plantations on the Hawaiian islands, the people there have relied more and more on the mainland for their food and grocery items. By 1936, only 37% of Hawai'i's food was grown locally.

Today, everything arrives through the central port in Honolulu, and much of the food is stored there before distribution, leaving it vulnerable to the threat of hurricanes, tsunamis and other weather-related problems that could wipe out access to the port. The closest neighboring port is more than 2,000 miles away, making speedy emergency deliveries difficult. The coronavirus pandemic only exacerbated the situation.

"What was unique about COVID was, there's 3,000 something counties across the US, there's 19,00 cities across the US and every city, every country, every state, was having a tsunami or a hurricane of their own," Chad Buck, the owner of Hawaii Foodservice Alliance, explains in the documentary "Climate for Change". States like Arizona and California, which could typically send surplus goods to Hawai'i in the case of a disaster, were dealing with their own food chain supply problems, and chain stores were wiped out across the US. "For the first time in Hawai'i's history, we found ourselves completely stripped of support," says Buck.

At the same time that food distributors like Foodservice Alliance's Buck were worried about supply chain shortages from shipments to the islands, local farmers were starting to see their business dry up when tourism to the islands stopped. "Our farmers were having an excess of thousands of pounds of produce because that food was originally going to feed the tourism economy and to feed all of the restaurants and the hotels," says Kea Keolanui, co-owner of Hawai'i Eco, an agricultural tour company based in Hilo on the Big Island. When tourism dried up, they worked with their partner farm, O.K. Farms, and neighboring producers, to offer a weekly CSA box direct to local consumers.

"We had over 30 different CSAs operating in the state of Hawai'i, whether they were operating prior to the pandemic or they popped up in response, similar to how we did," says Keolanui, explaining that customers were purchasing twice as much local produce as they had pre-pandemic. "It was clear that people wanted to support local more than ever, because they felt like it was a more guaranteed option than waiting for things to arrive in the grocery store."

When COVID-19 hit, the Kahumana Farm Hub, based in Wai'anae, O'ahu, was primed to help get local food to the community. Just as other food hubs in the US grew exponentially early in the pandemic, Kahumana's CSA subscriber list jumped from 10 to 500 in about two weeks. "We ended up bringing on almost 50% more suppliers, we became an inter-island network, and we basically got a lot more of our logistics in place, got refrigerated cars and trucks and more refrigerators," says Saleh Azizi, the farm hub's manager.

The farm hub had originally opened to provide a retail outlet for home growers and backyard pickers. "We have this sort of narrative of being a food desert here [in Hawai'i] and at the same time, us who are farmers and have connections with other farmers, know that it's just an abundant kind of place," says Azizi, who helped open Kahumana in 2017. "We felt that one of the things that was missing was an enterprise that would help small farmers, and even backyard growers, share the things that they grow with other people in our food system."

The farm hub gained trust in the community by pre-paying farmers and local growers — who bring items like apple bananas and pineapple growing in their backyard — in cash. "People share their resources in these rural communities, especially in the Indigenous Hawaiian community where there's fairly large trimmings. It's not always the person who owns the fruit trees that gets permission to pick them. It might be a grandmother that lets one of her grandsons pick her tree and make an income from that," says Azizi, who explains that growing food is an important part of the Hawaiian Indigenous culture. "We really ground our hub in the Indigenous world as well, because those are the kinds of practices we want to promote. We didn't create them, but we're super excited that we're promoting them through our enterprise."

Farmers like Keolanui and Azizi, and the networks of farmers they connect with, see the inherent sustainability and potential of traditional crops — foods like taro (called kalo in Hawaiian), breadfruit, coconut and banana that the Polynesians originally brought to the islands —  as well as other tropical crops, including lychee, rambutan, papaya and mango.

Through sales at his food hub, Azizi has seen high demand for traditional Hawaiian goods, but says familiarity can be limited. "The traditional thing people did with taro was make poi, and not everybody knows how to do that," he says, explaining that in the modern-era of city living, traditional cooking knowledge has been lost. A traditional Polynesian dish, poi is made by mashing the taro plant and can be eaten as a sweet dish, or fermented and enjoyed as a savory, sour side dish. "When we have farmers that grow taro and then make poi, [the farmers are] even more popular," he says.

Along with needing the cooking knowledge, customers who are used to the supermarket's have-everything-you-need shelves need a mindset switch when it comes to shopping from the farm hub or CSA, which depend on what the farmers have grown.

"It's harder to grow things like celery and broccoli and cauliflower [here]. Sometimes we do get those and provide them in the boxes, but it's rarer than items that are more fit to the tropical environment," says Keolanui, explaining that their CSA produce box is not customizable, but rather a mix of whatever the farmers have on hand. "So part of the produce box is an educational component, teaching people how they use the items that they get and how to substitute. If you don't have celery available and your recipe calls for this crunchy celery, substitute it with heart of palm or kohlrabi, which provides that same kind of crunch."

Another Native crop seeing a resurgence is breadfruit, which the Hawaiians call 'ulu. "It's farmers really putting their nose to the grindstone and saying, 'We need more 'ulu because 'ulu is going to feed our entire island and it will feed all of the Hawaiian islands if we have enough,'" says Keolanui. There are breadfruit festivals, recipe contests and a farmers cooperative for small-scale breadfruit farmers.

Breadfruit is a nutritious, versatile fruit. Unripe fruit is firm and starchy, and can be cooked into soups, stir fries, curries and similar dishes, while ripe fruit becomes soft and sweet, and is used in pies, custards and other sweet dishes. Diane Raggone, director of the Breadfruit Institute at National Tropical Botanical Garden, calls it the "most ecological carbohydrate in the world;" one tree can produce 300 pounds of fruit annually and its strong root system helps strengthen the soil and store carbon.

Other positives about breadfruit and taro: the starchy vegetables can be substituted for rice and other staple carbohydrates that are not grown in Hawai'i, reducing the state's dependence on mainland crops. They also have lower glycemic indexes, making them better options for the significant population of Hawaiians struggling with diabetes.

"The most amazing thing about the Hawaiians, is back in the olden days they had more people living there and living off the land," says Keolanui. "And how were they doing it? They were doing it with 'ulu, kalo, and a few other crops."

The Hawai'i state government has recognized a need for support in the past: they set up the Hawaii Agribusiness Development Corp 25 years ago to help convert former pineapple and sugarcane plantations to more economically viable farms. In the 1960s, Hawai'i was responsible for 80% of the world's pineapple, today it's 2%. While both crops are still grown on the islands, with cheaper products coming from Central and South America, it is no longer economically profitable to grow either pineapple or sugarcane. But a scathing audit done earlier this year, as Civil Beat reported, found that the development corp has accomplished little in the past two-plus decades, leaving more than $250 million unaccounted for.

For the local food system in Hawai'i to grow, Azizi says government support is vital. "It's important that the government recognizes what we would like to do, and then invest in that type of activity, instead of constantly trying to focus on building these farmers that want to be large-scale and export," he says, explaining that food hubs in Hawai'i have largely developed on their own. "It's sort of like [the government is] missing where our real skill and focus and priority should be."

One area that the government could quickly help is within institutional purchasing in the state. "We see institutional purchasing as sort of the next level of the food system, hospitals, schools, even the hotels for that matter," he explains. "They're big institutions and their only mandate is to buy 10% local." In April, Hawai'i's House and Senate signed a bill that required that 10%, with an increase every five years until it's up to 50% in 2050. The bill is currently waiting for signature by Hawai'i's Governor David Ige. This bill would be both a sign of support and increase revenue for the local producers.

Along with government support, the community also has to be on board with a shift in food production. As Civil Beat recently reported, a proposed grassfed dairy operation in Kauai gave up attempts to win regulatory approval after five years; one of the many hurdles they faced were concerns about foul odors and flies bothering a nearby resort's beachfront pools. "I feel that as we become a more suburban and urban society, we've become more eco-hypocritical or eco-imperialistic," Bruce Mathews, the dean of the College of Agriculture, Forestry and Natural Resource Management at University of Hawai'i, Hilo, told them. "In other words, we don't want noise, pesticides, pollution in our own backyard — but we don't mind so much paying for food imported from other places."

Azizi agrees that more public support is needed, citing the theory of voting with your dollar. "The more people that vote [for] and purchase local food, the better and the stronger the movement will get," he says. "[More public support of local food will allow for] more farmers that make a good salary, and that feel like being a farmer is not necessarily sacrificing their other life goals, whether it's getting good health insurance or sending their children to the best schools."