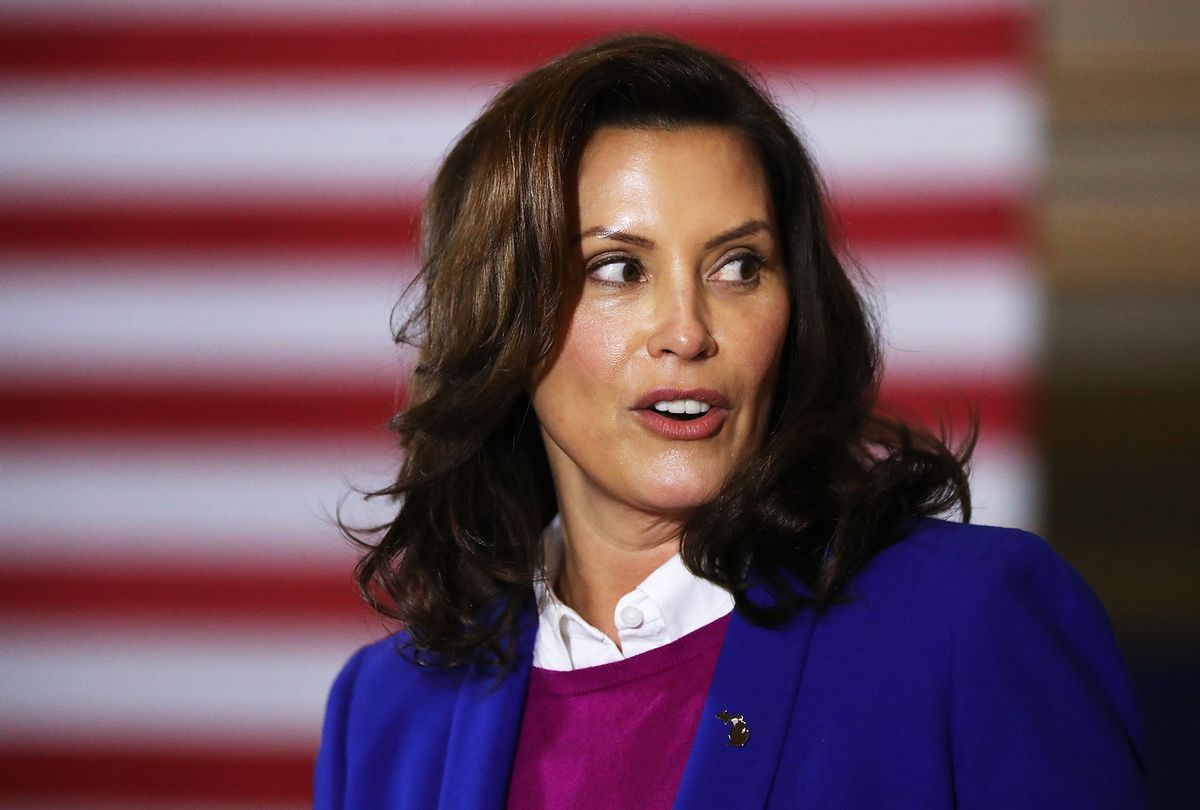 The Republican leader of the Michigan State Senate says the party will try to push through its proposed voting restrictions, using a unique loophole in state law, despite a near-certain veto by Democratic Gov. Gretchen Whitmer.

Republicans have already introduced 39 voting bills in the State Senate and dozens more in the House, three of which have already passed. Whitmer has vowed to veto the proposed restrictions. Senate Republican Leader Mike Shirkey told local news outlet JTV earlier this month that Republicans do not have the votes to override the veto but would instead pursue a scheme to use the state's citizen initiative process to circumvent the veto.

"You heard it here first, keep your eyes and ears open for the potential of a citizen initiative driven by the state party on some of these more important election laws that need to be considered," Shirkey said.

But state Sen. Erika Geiss, a Democrat, warned in an interview with Salon that "citizens will never actually see this question on their ballot."

Despite the name, Geiss explained, such a "citizen initiative" will never come up for a vote by the full electorate. "So it's really disingenuous," she said.

Michigan's unique "adopt and amend" procedure allows the state legislature to adopt a citizen initiative and then pass it into law with a simple veto-proof majority. The scheme only requires about 340,000 signatures, or 8% of the total votes cast in the last gubernatorial election, meaning that Michigan's heavily gerrymandered Republican majority and less than 4% of the state's population can circumvent the governor's power without ever putting the question before the public.

"It is really an abuse of our power as legislators," Geiss said.

This process has only been used nine times in the last six decades, according to the state's Bureau of Elections. Ron Weiser, chairman of the Michigan Republican Party, first floated the scheme back in March, before the state GOP forced out its executive director for criticizing former President Donald Trump's election lies.

"It's really unfortunate because it does not reflect the will of the voters," state Rep. Matt Koleszar, vice-chair of the state House Elections and Ethics Committee, said of the Republican scheme in an interview with Salon. "The other option they have is letting it go to the ballot. I don't think they would do that, because it would be defeated."

In fact, Michigan Republicans have been trying to undo another ballot initiative that overwhelmingly passed in 2018 to create an independent redistricting commission, which threatens the party's hold over the legislature. Nancy Wang, the executive director of Voters Not Politicians, a campaign launched to pass the redistricting initiative, said that attempt to reverse the will of the voters was a prelude to this year's Republican power grab.

"It's so shocking — the extremes they will go to to legislate and pass laws that only a tiny minority of Michiganders who still believe the Big Lie support, at the expense of the millions of Michiganders that voted for expanded voting rights," Wang said in an interview with Salon. "It'sshocking because it's such a small number of people that you need to get to sign on."

Koleszar said that Republicans plan to use the citizen initiative process to circumvent Whitmer's power on other issues as well. "We have already been told they absolutely will do that," he said.

Republicans organized a similar citizen initiative scheme to collect enough signatures for the legislature to adopt the Unlock Michigan petition, which would repeal the governor's emergency powers. That came in opposition to pandemic restrictions imposed by the Whitmer administration

Shirkey said the voting initiative would be much like Unlock Michigan. The Republican goal is for the legislature to adopt a bill the governor has no power to veto.

"There's half a dozen bills I think are pretty important that the governor may have some difficulty signing," he said. "So that is what will likely happen, is it will be packaged into a citizen's initiative."

Shirkey quietly played a big role in the Unlock Michigan campaign and a dark money group linked to the Senate leader spent nearly $2 million to fund the campaign. Ingham County Clerk Barb Byrum said she was "concerned" about Shirkey's voting initiative scheme, given that recent history.

"The tactics that that organization used for Unlock Michigan left signers feeling deceived," Byrum said in an interview with Salon. "What they thought they signed wasn't actually what they signed. Frankly, it was borderline illegal."

Byrum cited a Detroit Free Press report showing that the group's trainer taught signature collectors "how to illegally collect voter signatures, trespass, encouraging lying under oath if they were ever called into a deposition. So that is the type of organization that Shirkey has been aligned with and I worry that's going to be the same organization that he is going to use to push [this] new initiative."

The State Senate has thus far passed three of the 39 restrictions proposed so far. SB 285 would require voters requesting absentee ballots to provide ID or a photocopy of the ID to their local clerk. SB 303 would require voters without an ID on Election Day to cast a provisional ballot instead of signing an affidavit to affirm their identity. And SB 304 would allow those provisional ballots to be counted only if a voter presents an ID to their local clerk's office within six days of the election.

The State House last month inserted another provision into SB 303 allowing provisional ballots to be thrown out if poll workers — who have no training in signature verification — do not match the signature on the ballot to state records.

"What the House did is to kind of double down on voter suppression," Wang said. "It passed a version that would be the most restrictive voter ID law in the entire country."

Shirkey told JTV that he was "not sure that the signature part will ultimately get to the governor. Several lawmakers told Salon they expect the Senate to remove the House-added portion.

But Wang warned not to treat Shirkey's comments as evidence of "what's actually going to happen."

Koleszar said even the original Senate-passed law was "redundant and quite frankly makes no sense at all," since Michigan already requires voter ID.

"It would certainly have the potential to increase lines at polling places, create confusion," he said, adding, "This is a solution in search of a problem and this problem doesn't exist."

"I don't have access to a photocopy machine in my house," she said. "It costs money to get a photo ID and for many it's not an easy document to get. Think of how long it takes to get your birth record, your marriage license. … Those are costly documents to get and it's costly to get a photo ID as well."

Though Shirkey has acknowledged that the pace of advancing Republican legislation has been slower than he would like, Democrats in the legislature expect all the bills coming out of the Senate Elections Committee to ultimately pass the Republican-led legislature.

One bill would require ballot drop boxes to close before polls close. "That is very, very restrictive," Geiss said. "It creates another barrier to voting and that has been a concern for me."

Byrum said she expects the bill "will only lead to frustrated voters, confusion, more time taken away from from the clerk or his or her deputies trying to explain why and how to exercise the right to vote."

Another bill would allow partisan poll watchers and challengers to record video inside polling places and counting boards, which Wang warned could result in more scenes like the "madhouse" following the 2020 election, when Republican supporters were "trying to storm absentee counting boards, trying to intimidate poll workers."

"These bills would just inject more of this kind of toxicity and partisanship and intimidation into election administration," she said. "There's a whole raft of them, though, and all of them are bad."

Many of the Michigan bills mirror those proposed or enacted in other states. In fact, the head of Heritage Action, the sister organization of the conservative Heritage Foundation, was recently caught on video bragging that the dark money group had literally drafted model legislation for state lawmakers to adopt.

"They all concern me because they all impact access to the ballot," Byrum said. "It is quite unfortunate that the Michigan Republicans have taken a page out of the Heritage Action Fund and introduced these bills. These are the same bills that are being introduced around our country. It's really unfortunate that the Republicans have chosen to put their party over our country and our democracy."

Republicans have justified their voting restriction push by arguing that reforms are necessary to ensure "election integrity," claiming they are responding to concerns raised by their constituents.

A report by the Republican-led state Senate Oversight Committee last month found "no evidence of widespread or systemic fraud" and rejected other Trump-backed conspiracy theories, calling out his allies for "profiting by making false claims."

Geiss said that report "proves that these bills are unnecessary."

"They're just so attached to the Big Lie and carrying the water of the former occupant of the White House that they can't see reality," she said. "They're becoming incredibly divorced from reality even when the evidence is clear before them. They're just caught up in the wave of trying to prevent people from voting and making it harder for people to exercise their right to vote because they're upset that their candidate didn't win.

"If your own reports show that there was no widespread voter fraud, what are you trying to accomplish?" she asked.

That State Senate report, however, has not dimmed Republican aspirations to restrict ballot access and Trump has continued to push the Big Lie, which has resulted in a flood of attacks and threats targeting election administrators.

"These attacks are the result of former President Trump providing the kindling, and others like Shirkey and some attorneys here in Michigan have been adding the lighter fluid and stoking the flames," Byrum said. "We're being threatened on a regular basis. We're getting emails from people accusing us of malfeasance. It's making people want to leave. … Professional election administrators are going to get out, they're going to leave. Some already have — and my huge concern is that they're going to be replaced with these conspiracy believers."

Without safeguards in place in place to protect ballot access or election administrators in Republican-led states, and apparently some Democratic-led states with Republican legislatures, Democrats have rallied behind federal voting rights legislation and a recent proposal that would protect election officials from unjust removal and intimidation.

Democrats in the Texas House fled the state this week to block the passage of another Republican voting package, traveling to Washington to pressure Democrats in the U.S. Senate to pass the For the People Act, which has languished in the chamber, frozen by a Republican filibuster and the reluctance of "centrist" Democrats like Sens. Joe Manchin of West Virginia and Kyrsten Sinema of Arizona to consider filibuster reform.

"The For the People Act would absolutely cement that freedom to vote," Koleszar said, adding that it would frustrate Republicans' desire to create more barriers to voting.

There appears to be little lawmakers can do to prevent the Republican end-around on voting restrictions in Michigan, but activists plan to take to the streets to do everything they can.

"If they do start that petition process to collect those signatures, then we're going to be out on the streets telling people are exactly what is happening, because we think that [Republicans are] going to lie and say this is about election security. We're going to be like, actually this is to prevent you from voting."