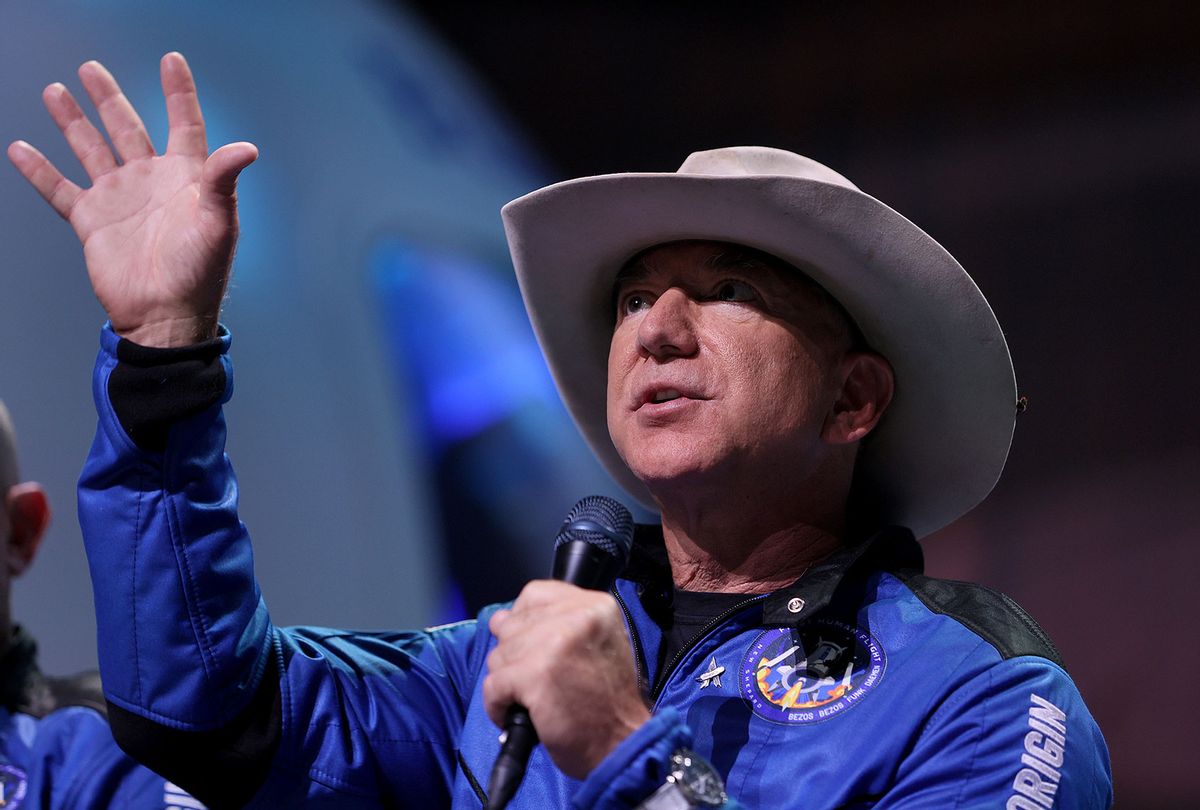 Jeff Bezos speaks about his flight on Blue Origin’s New Shepard into space during a press conference on July 20, 2021 in Van Horn, Texas. Mr. Bezos and the crew that flew with him were the first human spaceflight for the company. (Joe Raedle/Getty Images)
--

Evidently not content to merely rule Earth, humanity's billionaires have begun sparring over outer space. On Tuesday, Amazon founder Jeff Bezos blasted into space on his own spacecraft made by his company Blue Origin; Bezos' feat comes nearly a week and a half after Virgin Galactic's Richard Branson, who rescheduled his own company's high-altitude flight in order to beat Bezos to space by nine days. The tacit third contestant in the space oligarch business is CEO of SpaceX Elon Musk, who has been publicly stating for years that he and his company intend to colonize Mars.

The news of Bezos and Branson's flights drew a lot of attention, and not necessarily all of the positive kind that perhaps the billionaires had hoped they would receive.

"Amazon Billionaire Jeff Bezos Rode A Dick Into Space And The Jokes Make Themselves At This Point," BuzzFeed's headline blared. Commentators seized on Bezos' tone-deaf comment at the launch press conference, in which Bezos thanked Amazon workers for making money for him that allowed him to travel to space.

Indeed, the billionaire space race has illustrated how disconnected these two men, who have a collective estimated net worth of nearly $210 billion ($205 billion of which is Bezos'), are from everyday life for the vast majority. In a moment of historic income inequality, amid a pandemic, as droughts, wildfires, and extreme flooding are destroying communities across the globe, a few billionaires are competing over their ability to take low-Earth orbit trips. As one Twitter user put it: "Jeff Bezos going into space for 3 minutes for funzies when he could've ended world hunger feels dystopian."

As dystopian it may feel to some— clearly not to those who have purchased nearly $100 million worth in tickets to hitch a future ride on a Blue Origin suborbital space trip — there appears to be a strong correlation between being ultra-wealthy and desiring to explore or conquer space, as though wealth begets space ambitions. Bezos and Branson are all entrepreneurs. None of them began their careers as astronauts or astronomers, and they certainly aren't interested in doing science up there. Is something happening psychologically that induces this strange desire in the uber-rich? Are they bored with Earth? Or is it a symbolic, masculine power play, an illustration of their dominance expressed through literal giant phalluses?

Psychologists tell Salon it's probably not a coincidence that billionaires appear to be obsessed with going to space, so much so that they're willing to spend billions of dollars of their own money to make it happen.

Michael Kraus, a social psychologist who specializes in the study of inequality at Yale University, told Salon that while there "exists variation in all strata in terms of personality," including the wealthy, the social context of being very wealthy can make a person relate to the world in a more self-centered way. Hence, worrying about issues that more immediately face this Earth aren't top of mind for them.

"It's worthwhile to think for a bit about what that context might be like," Kraus said of how wealth distorts one's psychology. "Money can reduce external sources of threat [and] discomfort." Likewise, many rich people surround themselves with yes-men, perhaps unintentionally. "People will say yes to your ideas because of the money," Kraus added. "All of this makes more things possible for you than for other people, and that then warps your worldview."

Kraus said this warped worldview makes it more difficult for some wealthy people to see what's happening all around them on Earth.

"Why they choose space, in particular, seems fairly straightforward about positive media attention, new places to make profits and a straightforward way to benefit from government funds," Kraus said. "It's also an expression of this self-centrism."

Dacher Keltner, a professor of psychology at University of California-Berkeley and author of "The Power Paradox," said the billionaire obsession with space follows a historical trend of people with power, privilege and resources trying to give off "an almost mystical appeal"; for example, when powerful men commission statues of themselves. Space, Keltner noted, is "mystical," and it's not a coincidence that three of the world's billionaires are trying to break barriers associated with the unknowns of the universe.

"They love to gravitate to things that give them this singular status in the world, and I think that's one of the massive problems of privilege," Keltner said. "They just want to be at the top and want everybody to be marveling at what they do, so they go out and they don't think about advancing the mundane concerns of ordinary people — they think about flying in space, living forever, building islands in the sea where only they can play golf."

Indeed, power and status have something to do with this obsession with space. Similar to Bezos' sheer determination to make everything deliverable, not just books, clinical psychologist and author Dr. Ramani Durvasula said it makes sense that he would turn his focus to space. Self-made billionaires like Bezos are often obsessed with the next thing, especially when their wealth and status has shaped their identity.

"There's no end game . . .  people ask, 'why do they keep pushing, they have everything?"  But everything is never enough, there's always one more thing," Durvasula said.  "And that's the megalomaniacal piece of this, and again it comes back to that bigger conversation about what is the social responsibility that is supposed to accompany wealth?"

Suniya Luthar, professor emerita Columbia University's Teachers College, said the "hedonic treadmill" could be at play here, too. The term "hedonic treadmill" is a positive psychology theory that states that even after an individuals' goals are achieved, that person will return to their baseline level of happiness.

Luthar added that she's cautious to criticize Bezos, as that any human with such wealth and resources might do something similar.

"It's human nature to be envious of people whom you know, are way more successful and have way more possessions and fame or whatever it is that you want," Luthar said. "Also, as we've all been through so much stress and pain, this often comes out in anger or resentment.  We're all looking for someone to blame, the anger has to land somewhere".