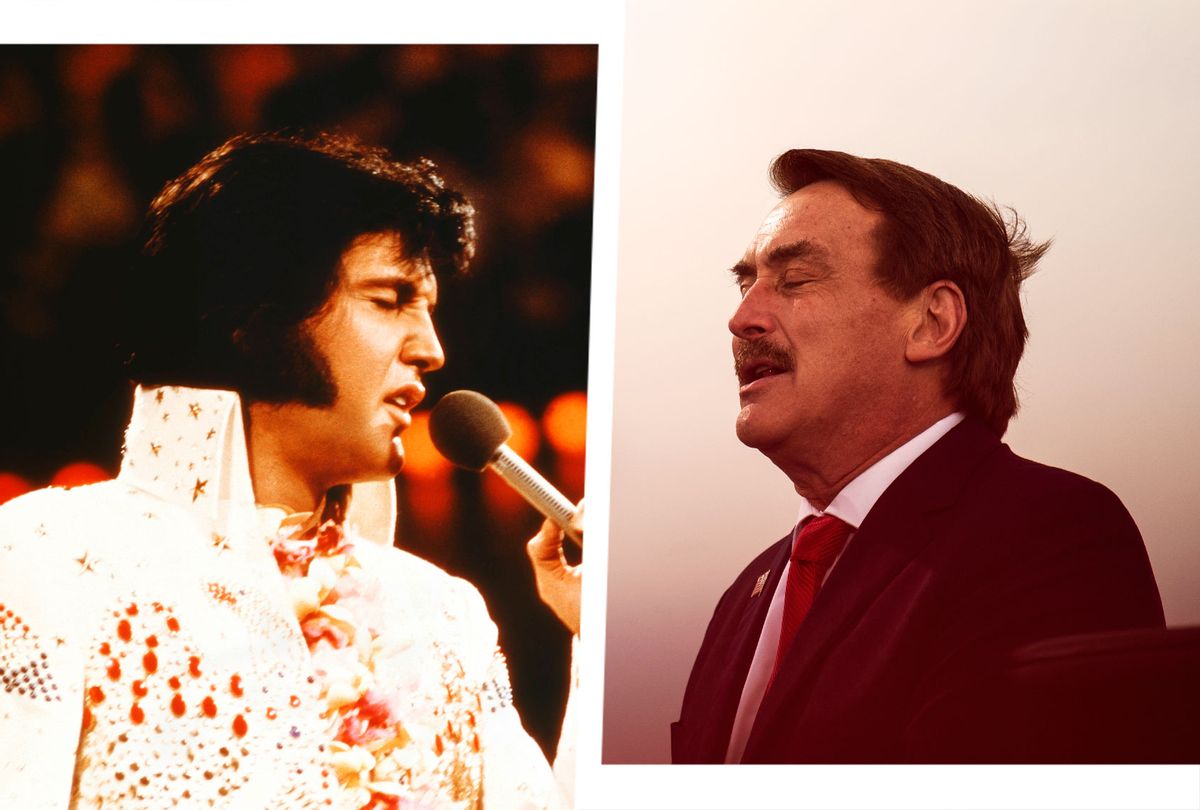 Nearly a year and a half ago, I began covering MyPillow CEO Mike Lindell. He's an oddly charismatic character, a former crack addict and fervent evangelical Christian willing to preach the word of God at the drop of a hat. He became a star in TrumpWorld nearly overnight after speaking at the White House alongside former President Donald Trump in March of 2020.

Lindell reminded me of my own Uncle Bob, a Vietnam War veteran with a greased-lightning demeanor who bears the horrid wounds of Agent Orange. Bob has a similar physique to the pillow tycoon, also rocks an old-school walrus mustache and isn't afraid to tell you what's on his mind. Uncle Bob and Mike Lindell would, without question, get along.

We are now drawing near the climactic moment of Lindell's career as top exponent of Donald Trump's "election fraud" theories: A much-publicized "cyber symposium" event in Sioux Falls, South Dakota, which will allegedly bring to light evidence that will cause the scales to fall from America's eyes. The Supreme Court, or so Lindell believes, will uproot the results of 2020 election by a 9-0 vote (on what grounds and by what mechanism remains mysterious), leading to the immediate reinstatement of President Donald Trump.

With this high-stakes event, on which Lindell's reputation seems to rest, fast approaching, Salon gave him a ring to check in on his progress. And in true Lindell fashion, he didn't disappoint.

Relishing in the glory of "crushing" this Salon reporter at the Conservative Political Action Conference (CPAC) event two weekends ago in Dallas, Lindell struck a different tone than in his often combative and utterly baseless claims of widespread voter fraud in last year's election. Instead, he was positively jovial, wanting to make sure Salon would attend his South Dakota "cyber symposium."

"Are you coming? And the cyber guy?" Lindell asked. "We just sent out the invites, we're getting flooded with them."

He continued with a note of concern. "Get it in right away if you can, Zach, I do want you there, because I want the bad media that writes discrediting things, so they can actually write apologies to the whole country. That will be nice!"

Lindell went on to promise Salon that if his evidence doesn't provide the goods he has long promised, this reporter and his "buddy" might be the ones to take home his $5 million jackpot. The "buddy" Lindell referenced is indeed a "cyber guy" (who has requested anonymity), a highly qualified expert who advises this Salon reporter on data science and technological matters.

Lindell then complimented Salon for covering his Wednesday announcement that journalists, politicians and "cyber experts" are eligible to win his $5 million bounty if they can prove his 2020 election data is not legitimate.

"That was nice. You wrote an article," Lindell said. "I actually retweeted one of your articles — that's the first time in history I retweeted [one]." Then he had to clarify: Since he's banned from Twitter, he instead posted it to Facebook.

Lindell then made an ambitious prediction: His August event will attract more eyeballs than Elvis Presley's "Aloha From Hawaii" concert, which was beamed around the world by satellite on Jan. 14, 1973, and witnessed by a billion people.

"Elvis Presley in 1973," Lindell reminisced. "Over a billion people watched that 'Aloha From Hawaii' because at that time, it was epic. This is going to be so important for the whole world to see — I'm hoping the word keeps spreading so that everybody at least tunes in," he added.

A devoted Elvis fan, Lindell wasn't shy about the prospect of upstaging the King of Rock 'n' Roll. Asked whether his event could really be bigger than the legendary Elvis concert — one of the first global satellite pay-per-view spectacles — Lindell expressed optimism. "I'm hoping it is. I just hope a lot of people see it," adding earnestly that no matter your political party, by the final day of the gathering, the entire world will be convinced to "right the wrong" of the 2020 election.

"This is so important to the world. To the world!" Lindell added. "I believe that if we get the word out, it's going be seen by — not millions. I'm hoping a billion, and I've used that correlation to Elvis. I am hoping that. I'm hoping that!"

Salon pushed forward with a series of questions about the details of Lindell's August event. According to the King of Restful Sleep, the symposium will feature a "mock election" every two hours, in which a hacker "flips votes" while a "cyber guy" goes into a "soundproof room with headphones on" and reappears moments later to decipher the meaning of packet captures.

Near the end of our friendly 20-minute conversation, Lindell reported he had to adjourn for a cable interview on One America News, then sternly told this reporter that I should contact Fox News to ask whether they will be present in Sioux Falls for the big event. "Ask Fox!" he demanded. "Shame on Fox that they haven't come. You should reach out to them!"

Gaining a second wind and apparently no longer concerned about his OAN cable news hit, Lindell took a few more swings at Fox News for ignoring his entire election-fraud enterprise his $5 million jackpot. Fox's nonexistent coverage of his efforts, Lindell said, were part of "the biggest cover-up this country's ever had in history."

A Fox News spokesperson did not return Salon's request for comment.

Wrapping up the interview, Salon asked Lindell about the Smartmatic, ES&S and Dominion voting machines he claims to have in his possession. "We've had machines for, I don't know, months now," he said. "You realize you can buy them on eBay, right?" Lindell asked.

When asked if that's how he acquired them, Lindell responded, "No, no, and I'm not gonna say how we got them. You know, we were — we didn't take them, we were given them." Asked if these machines were with him now, or still in an undisclosed location ahead of the big event, he said, "I don't carry machines around with me!"

A few minutes after we hung up, Salon received a text message from Lindell, featuring a TikTok video. That cleared up an important question: Lindell's CPAC beef with Salon has been squashed, since he has unblocked this reporter's phone number.