Corsets are only the tip of the terrifying beauty iceberg 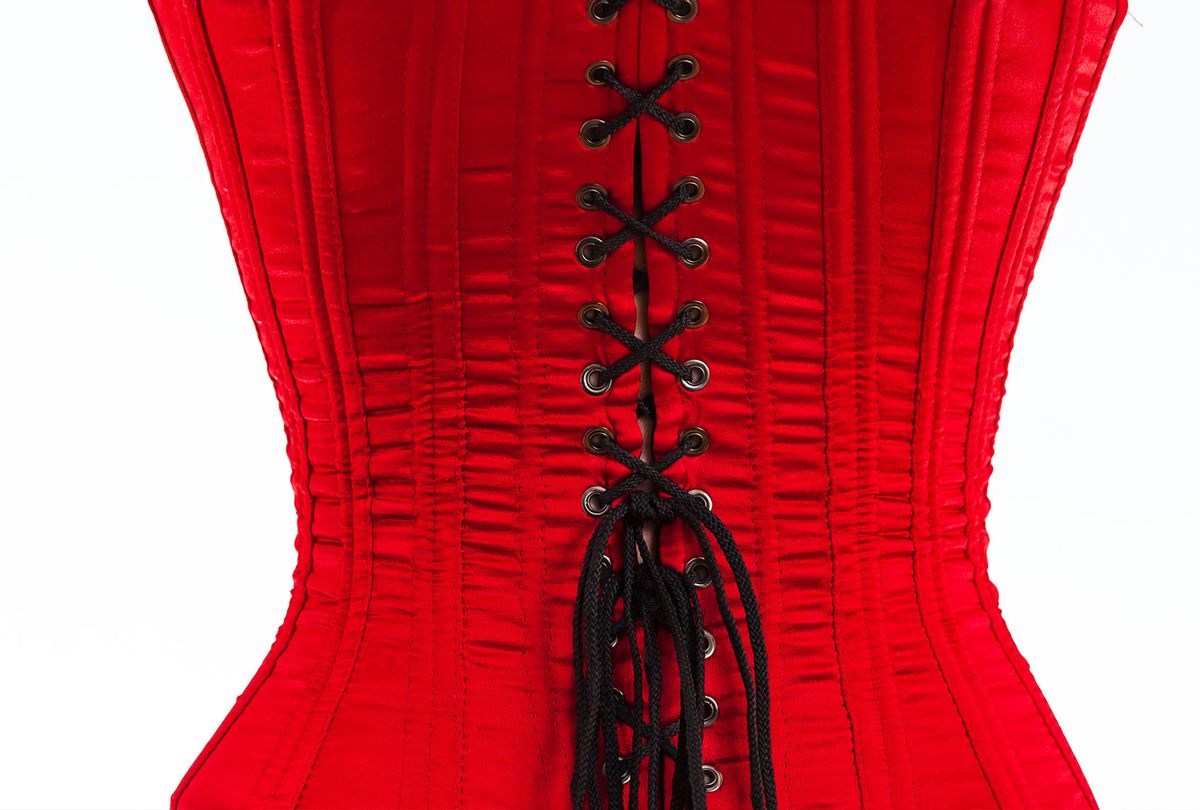 The back of a red corset with black laces (Getty Images)
--

Chemical peels that burn layers of skin from your face. Appetite suppressants that come with a risk of heart failure. Cosmetic surgeries that change the appearance of a woman's most intimate parts. There are plenty of modern cosmetic practices that run the gamut from physically painful to medically risky. But most don't hold a candle to the hazardous cosmetic techniques of yore. Check out these historic beauty practices that are even scarier than modern ones.

You know what really turns men off? When women take deep breaths. In the 1800s, the invention of metal eyelets allowed women to cinch their corsets tighter than ever before, with acute medical consequences. In fairness, not all women tightened their corsets to the point of injury, and probably none of them achieved the 14-inch waist advertised in 19th century fashion magazines. But the stylish undergarments were often laced so tightly that they restricted women's breathing. In the long term, wearing corsets caused muscle atrophy, deformed the ribcage, and misaligned the spine. And extreme corset use wasn't just limited to women, as indicated by the warped ribs of a 19th-century Englishman whose body was excavated in the early 2000s. The study authors felt that it was likely an orthopedic corset, but noted "corset use to obtain a fashionable silhouette cannot be ruled out."

In the 19th century and earlier, some people (mainly in Styria, a region that encompassed parts of modern Austria and Slovenia) consumed arsenic to "produce a blooming complexion, a brilliant eye, and an appearance of embonpoint [sexy stoutness]," according to one 1857 magazine article on the practice. There were safety rules, of course: You were only supposed to take it while the moon was waxing, and you could only eat only a dose as big as a single grain of millet at first. If you took more than that before you built up a tolerance, you could die. Once you began eating arsenic regularly, though, if you ever stopped, you'd suffer from painful withdrawal symptoms like vomiting and muscle spasms. But wait, there was another downside—because arsenic interferes iodine necessary for thyroid function, eating it gave people goiters. Blooming, brilliant, embonpoint goiters.

A tradition that likely started around the late 10th century, foot binding was designed to turn a woman's feet into 3-inch-long "golden lotuses" by folding the toes under and binding them tightly. The extremely painful practice began when a child was as young as 3 to 4 years old and continued into adulthood. The resulting wobbly walk and doll-like feet were considered highly attractive and vital to a woman's marriage prospects. This one isn't limited to the distant past, either: Foot binding wasn't completely stamped out until China's Communist Revolution in 1949, and there are still living Chinese women who feet were bound as children.

In the early 20th century, before anyone knew about the health risks of radiation, radioactive consumer products were all the rage. In the 1930s, an enterprising doctor named Alfred Curie capitalized his association with the famous radioactive researchers (who he definitely wasn't related to) to launch Tho-radia, a French cosmetics brand whose products featured radioactive chemicals like thorium chloride and radium bromide. Advertisements for his face cream claimed that the radioactive formula could stimulate "cellular vitality," firm up skin, cure boils and pimples, even out redness and pigmentation, erase wrinkles, stop aging, and help retain the "freshness and brightness of the complexion." It's all vitality and brightness until someone's jaw falls off.

5. Making eyedrops out of deadly nightshade

Deadly nightshade is also called belladonna, or "beautiful woman," a likely reference to its role in the cosmetic routines of ladies in Renaissance Italy and beyond. Italian women — and later, women in Victorian England — would squeeze drops of deadly nightshade into their eyes to dilate their pupils for a striking, wide-eyed look they thought was seductive. Unfortunately, the side effects included blurry vision, vertigo, and headaches. And the blindness reported to result from its extended use? Worth it, as long as you got the watery-eyed look of a consumptive. The active ingredient in deadly nightshade, atropine, is still used today to dilate the eyes during eye exams, but unlike the cosmetic belladonna drops of the past, the highly diluted modern versions won't blind you.

The 1700s were rough on the complexion. Even if you don't count the miasmic filth in which even the richest people lived, there was smallpox to contend with — by the end of the 18th century, an estimated 400,000 Europeans were dying of it every year. If you were lucky enough to survive, the disease left severe scarring. The best way to cover these pockmarks and other cosmetic imperfections was lead face powder, and both men and women took advantage of it. It's great stuff — inexpensive and easy to make, coats well, and has a silky finish. Except even then, it was known to be wildly toxic. Not only did it cause eye inflammation, tooth rot, and baldness, but it also made the skin blacken over time, requiring yet more of the noxious powder to achieve the pure white face, shoulders, and chest that were so fashionable. Ah yes, and then there was the fact that using it could eventually kill you.

This controversial fad diet — which may or may not have actually existed — was not only dangerous, but also really gross. In the early 1900s, several newspaper accounts reported that women were eating pills filled with tapeworm eggs as a way to lose weight. The tapeworm eggs would supposedly hatch and take up residence in the intestine of their poor, plump host, consuming the nutrients that would otherwise be digested. This would keep the person malnourished and thin. However, even a century ago, doctors doubted people would subject themselves to this kind of pain to look good. In 1912, The Washington Post ran an article called "Tapeworm Pills For Fat People Merely A Wild Yarn, Say Experts." But as we know, people have done crazier things in the name of beauty.