A mask comeback is not enough to sway Trump voters: It's time to start imposing vaccine mandates

Coddling and cajoling the Trumpers isn't working: Mandates give them a chance to save face while avoiding COVID 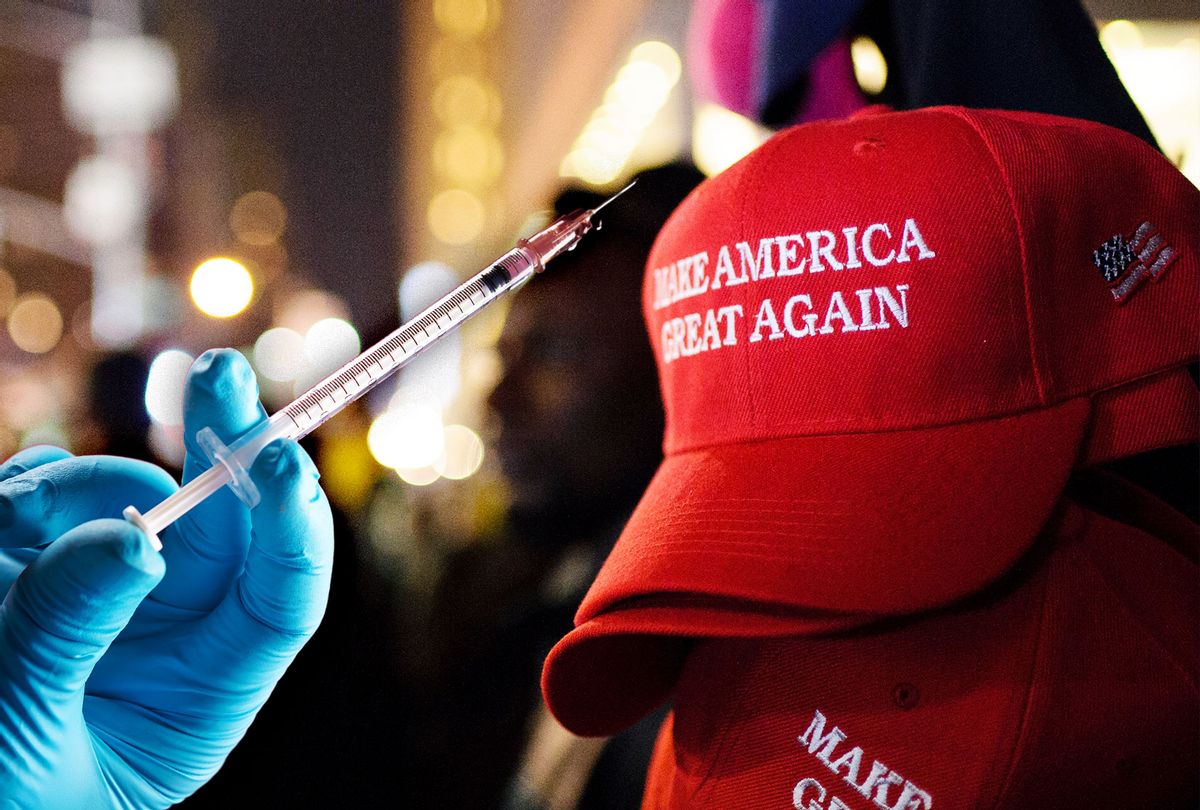 Vaccinated America is fed up with the unvaccinated, and the mainstream media is finally starting to pay attention.

This anger is completely understandable. While some vaccine holdouts are people who are sincerely scared or misled by misinformation, people are noticing both the geography showing hotspots are in Republican-heavy areas and polls showing the stark partisan divide on inoculation. Vaccinated Americans lived through the past year, including Donald Trump's failed coup and the pandemic surging due to Republican disinformation. They know full well that it's Republicans who are refusing vaccines and that they're doing it out of pure spite. Of course, vaccinated Americans are angry. They should be angry.

Yet even though Republicans are operating out of spite so pure that they'll risk their own health just to "own the liberals," the rest of us are being scolded to be endlessly gentle, placating, and understanding of them, most recently in a widely panned Washington Post column by Gary Abernathy. So with COVID-19 cases rising and Republicans continuing to run interference for Trump after he tried to overturn our democracy, skepticism mounts for the theory that just a little more hand-holding and hair-stroking is going to bring these people back to reason.

"[E]nough with the bogus Snowflake Syndrome narratives already," Greg Sargent of the Washington Post wrote in a rebuttal to the calls for more coddling.

The problem is that these calls for sympathy and accommodation only flow one way. Liberals are expected to do all the sacrificing, on the grounds that they have the capacity for empathy, and nothing is asked of conservatives.

This deep and persistent unfairness is now starting to crop up in public health responses to rising COVID-19 cases. Los Angeles has re-imposed a mask mandate, even though science guiding the Centers for Disease Control (CDC) shows vaccinated people are safe to go without. (As President Joe Biden's top health advisor, Dr. Anthony Fauci said in May, science shows vaccinated people "become a dead end to the virus.") Now the CDC is backtracking a bit, recommending all people wear masks inside in some parts of the country, as the delta variant spreads. Other cities are considering similar mandates or are already putting forward "mask recommendations."

These new mask mandates and recommendations are less about threats from vaccinated people and much more about unvaccinated people being free riders running around without masks. Unfortunately, the result is that vaccinated people must endure a minor but very real inconvenience in order to protect the unvaccinated from their own bad decisions. Helaine Olen of the Washington Post rightfully criticized Los Angeles County, pointing out that, "instead of punishing the people who did it right, give them positive reinforcement, while making it clear to the wrongdoers their actions come with consequences — for themselves."

In other words: Forget the mask mandates. Time instead for vaccine mandates.

To begin with, vaccines simply work better than masks. Masks work, but inadequately, as demonstrated by the 200,000-plus cases a day in January, when mask mandates were standard. Vaccines, however, work really well, which is why case rates started to plunge in the spring as vaccine rates went up. As CDC director Rochelle Walensky said earlier this month, this is a "pandemic of the unvaccinated." Just as importantly, vaccine mandates work, which is why, prior to COVID-19, they have been widespread and, outside of the complaints of a minority of anti-vaccination people, broadly popular. Diseases like measles, whooping cough, and polio that were once common are now incredibly rare due to vaccine mandates.

It's a peculiar trick of human psychology, but often small but certain frustrations better motivate people to make better decisions than the threat of disease and death. For instance, bans on indoor smoking led to a decline in smoking rates, suggesting that at least some people who were unmoved by fears of lung cancer were stopped by the inconvenience of having to step outside to smoke. The threat of dying horribly in a car accident didn't convince many people to wear seatbelts, but the threat of getting a ticket caused them to buckle up, saving lives.

A lot of people are able to convince themselves they're safe from the worst consequences of bad choices. Consider podcast host Joe Rogan telling his audience that a "healthy person" is safe from COVID-19. It's the kind of logic that right-wing anti-vaxxers are using to justify their choice to skip the shot to spite the left. But if they couldn't board a plane or go to their favorite bar or attend a child's wedding or they had to get a Q-tip shoved up their nose every day to go to work? Well, that inconvenience might be enough to convince them that this particular Trumpist tantrum isn't worth it.

Frank Luntz, a Republican pollster who has been focused heavily on researching anti-vaccine Republicans in recent months, recently reaffirmed that vaccine mandates, not coddling, is what refusers need in order to get the shot.

But many would reluctantly abide by them and get the shot if their state required it to go watch live sports, concerts, eat at restaurants, or board a flight. pic.twitter.com/CGyESYU4FD

There's been hesitation on the part of the Biden White House to push more aggressively for mandates, out of fear of seeing a repeat of some of the protests from last year, when right-wingers flipped out over lockdowns and mask mandates. No doubt that such protests would happen, just as they happened in France after French President Emmanuel Macron announced plans for vaccine mandates for travel, eating out, and other use of public areas. But while 160,000 people protested the mandates in France, far more — over 4 million people — finally sucked it up and got shot appointments.

The politics are different in the U.S., where refusing vaccination has become an identity marker for conservatives. Still, there's a good reason to believe that there'd be a similarly high ratio of people who quietly get vaccinated to people who protest. After all, what vaccine mandates would do is give Republicans a way to save face. No doubt many of them are harboring secret worries about getting COVID-19, but they keep refusing to get the shot, out of the perception that doing so would be disloyal to the conservative cause. But if they were "forced" to, they could have it both ways. They could both get the protection while still claiming to oppose the vaccine in the abstract. It's a win-win for most conservatives, even if they would publicly whine about it. (And, in fact, having something to whine about is a bonus for them!) It's the same dynamic we see with taxes — conservatives pay them and then get the pleasure of complaining about it.

There are some legal complications to mandates, of course, as Biden doesn't have the official powers to impose a nationwide mandate. But as Max Boot of the Washington Post pointed out, "Biden can set an example by using his authority to mandate vaccinations for airline travel and Amtrak travel and for federal employees or those who enter federal buildings," as well as "issue an executive order mandating military vaccinations as a national security priority." This would help normalize mandates, making it easier for state and local governments, as well as businesses, to require vaccines for people to work, be customers, or simply enter public spaces.

This week, there were baby steps in the right direction.

On Monday, the Department of Veterans Affairs announced that front-line workers would be required to vaccinate. The states of New York and California are imposing similar mandates on employees, as did the Mayo Clinic. And the rising anger from vaccinated people is starting to be heard. It's time for political and business leaders to start rewarding people who did the right thing, instead of bending over backward to accommodate people who are refusing basic medical care to spite the rest of us. The good news is that a decentralized approach to vaccine mandates would be much harder for conservatives to rage against, since the targets would be diffuse. Right now, too many places are operating in photonegative space from common sense, imposing on those who did the right thing while coddling those who refuse to do the bare minimum. It's time to shift gears and start embracing the basic principle of rewards for good behavior, frustrations and consequences for bad behavior. It's time for vaccine mandates.