Joe Biden's relapse: Can the president shake off his fantasies about Republican leaders?

Biden still claims that Republicans "know better." But as one critic says, the time for magical thinking is over 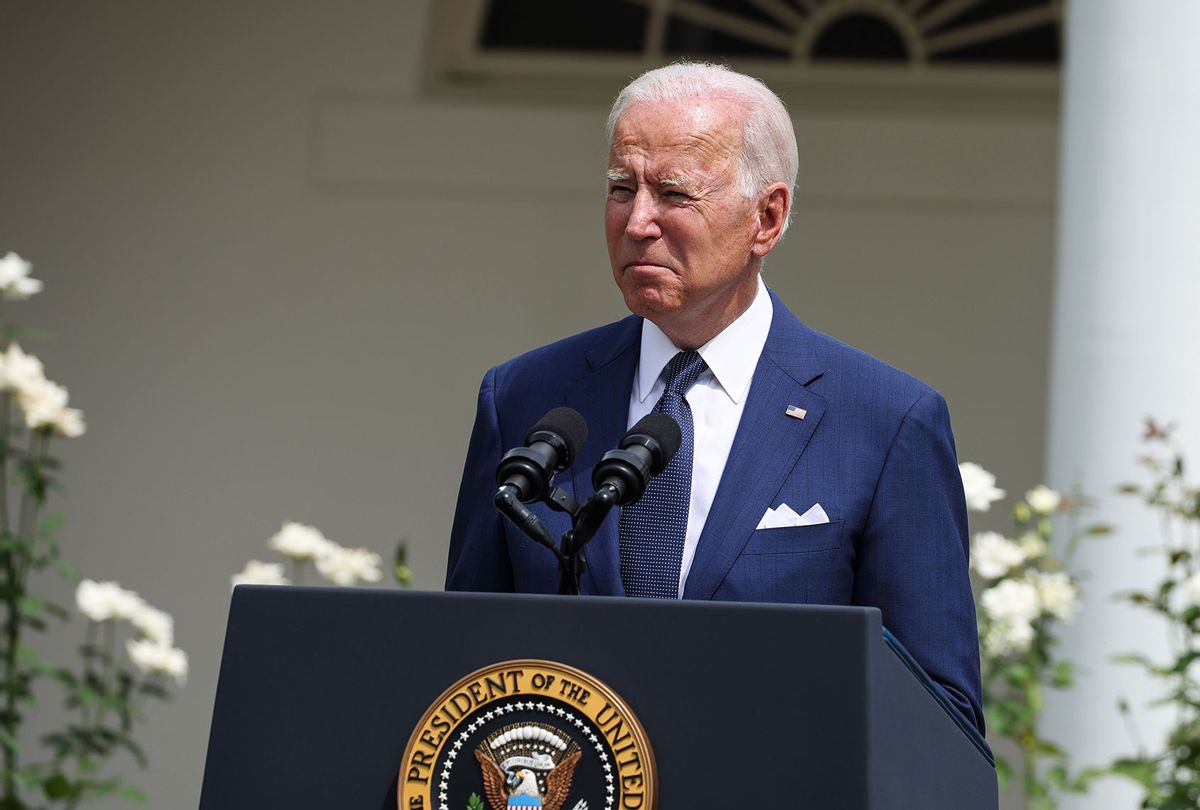 U.S. President Joe Biden delivers remarks during an event in the Rose Garden of the White House on July 26, 2021 in Washington, DC. The event marked the 31st anniversary of the Americans with Disabilities Act (ADA). (Anna Moneymaker/Getty Images)
--

For a while, President Biden seemed to be recovering from his chronic fantasies about Republicans in Congress. But last week he had a relapse — harming prospects for key progressive legislation and reducing the already slim hopes that the GOP can be prevented from winning control of the House and Senate in midterm elections 15 months from now.

Biden's reflex has been to glad-hand his way across the aisle. On the campaign trail in May 2019, he proclaimed: "The thing that will fundamentally change things is with Donald Trump out of the White House. Not a joke. You will see an epiphany occur among many of my Republican friends." A year and a half later, the president-elect threw some bipartisan bromides into his victory speech — lamenting "the refusal of Democrats and Republicans to cooperate with one another," contending that the American people "want us to cooperate," and pledging "that's the choice I'll make."

But the notion of cooperating with Republican leaders like Sen. Mitch McConnell and Rep. Kevin McCarthy was always a fool's errand. That reality might as well have been blinking in big neon letters across the Capitol dome since January, as Republicans continually doubled down on complete intransigence. By early March, when the landmark American Rescue Plan squeaked through Congress, Biden had new reasons to wise up.

Passage of the $1.9 trillion measure, Biden said, "proves we can do big things, important things in this country." But passage also proved that every Republican in the House and Senate is dedicated to stopping this country from doing "big, important things." The American Rescue Plan got through Congress without a single Republican vote.

As David Dayen, executive editor of the American Prospect, pointed out at the time, many of the major gains in the rescue package were fundamental yet fragile. While purported "free-market solutions" had been set aside, crucial provisions were put on a timer to sunset: "We have the outline of a child allowance but it expires in a year. The [Affordable Care Act] subsidies expire in two years. The massive expansion of unemployment eligibility for a much wider group of workers is now done on Labor Day weekend. There's a modicum of ongoing public investment, but mostly this returns us to a steady state, with decisions to make from there."

Whether progress can be sustained and accelerated during the next several years will largely depend on ending Republican leverage over the Senate via the filibuster and preventing a GOP congressional majority from taking hold in January 2023. The new temporary measures, Dayen notes, could all be made permanent, "with automatic stabilizers that kick in during downturns, and Federal Reserve bank accounts for every American to fill when needed. We could ensure that federal support sustaining critical features of public life remains in place. We could choose to not build a pop-up safety net but an ongoing one."

The obstacles to enacting long-term structural changes will be heightened, to the extent that Biden relapses into a futile quest for "bipartisanship." This year, the GOP's methodical assaults on voting rights — well underway in numerous states controlled by Republican legislatures and governors — could be somewhat counteracted by strong, democracy-oriented federal legislation. That simply won't happen if the Senate filibuster remains in place.

Yet Biden, even while denouncing attacks on voting rights, now seems quite willing to help Republicans retain the filibuster as a pivotal tool for protecting and enabling those attacks. During a CNN town hall last week, Biden said he favors tweaking the Senate rules to require that a senator actually must keep talking on the floor to continue a filibuster — but he's against getting rid of the filibuster. Eliminating it, Biden said, would "throw the entire Congress into chaos and nothing will get done." On voting rights, the president said, he wants to "bring along Republicans who I know know better."

Many activists quickly demolished those claims. "This answer from Biden on the filibuster just doesn't make sense," tweeted Sawyer Hackett, executive director of People First Future. "Republicans aren't going to wake up and 'know better' than suppressing the vote. The filibuster encourages them to obstruct and our reluctance to end it emboldens them to do worse."

The response from the president of the NAACP Legal Defense and Educational Fund, Sherrilyn Ifill, was aptly caustic: "What are their names? Name the Republicans who know better. This is not a strategy. The time for magical thinking is over."

As Biden slid into illogical ramblings on CNN to support retaining the filibuster, the implications were ominous and far-reaching. In the words of the Our Revolution organization, Biden "refused to support doing what must be done to secure voting rights. Despite all evidence to the contrary, he continues to entertain the possibility of getting 10 Republican votes for voting rights. Back here, in reality, precisely zero Republicans voted in support of the For the People Act, and there is no reason to expect that to change."

When Biden became president, the Washington Post reported that he had chosen to place a portrait of Franklin D. Roosevelt in the most prominent spot inside the Oval Office, as "a clear nod to a president who helped the country through significant crises, a challenge Biden now also faces." But Biden's recurrent yearning not to polarize with Republican leaders is in stark contrast to FDR's approach.

Near the end of his first term, in a Madison Square Garden speech condemning "the economic royalists," Roosevelt said: "They are unanimous in their hate for me — and I welcome their hatred." But now, in his recurrent search for cooperation, Biden seems eager for his Republican foes to like him. It's a ridiculous and dangerous quest.