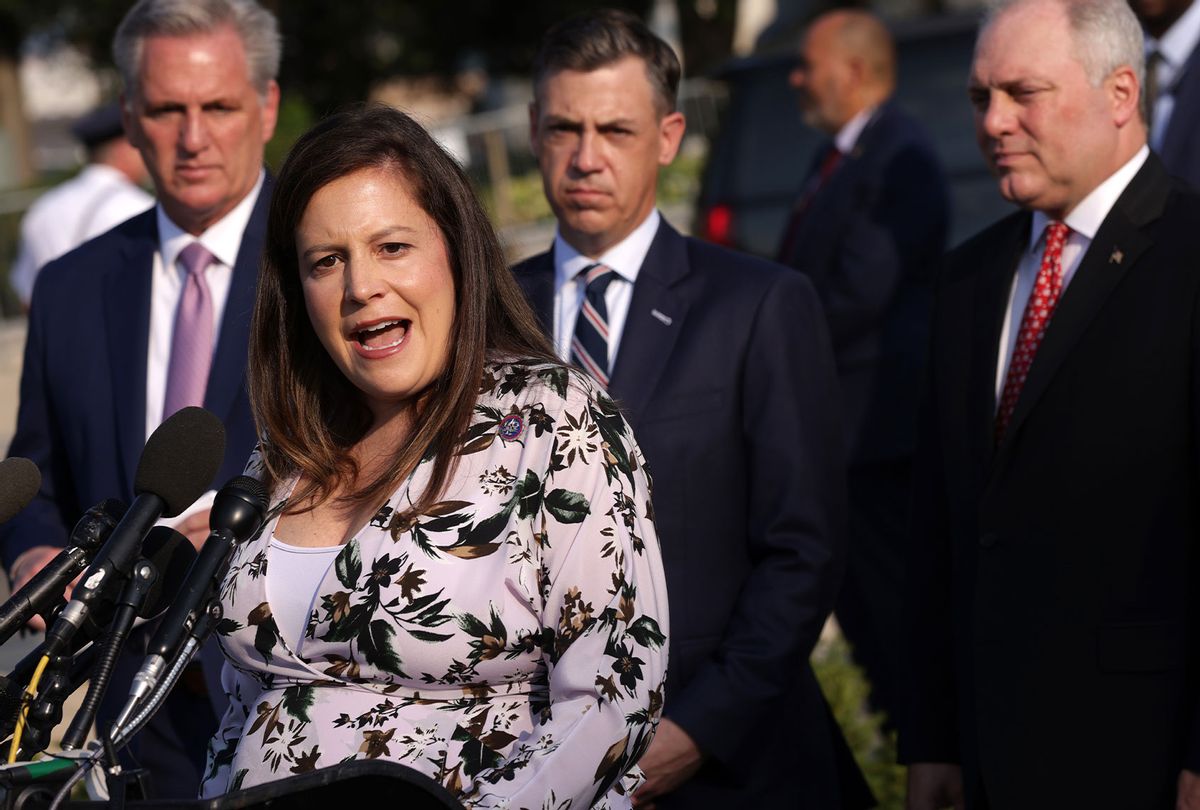 Ahead of the first hearing by the select committee investigating the attack on Tuesday, Stefanik, who objected to the certification of election results after the riot, blamed Pelosi for security failures at the Capitol. Although a mob of Trump supporters attacked police officers and broke into the complex to stop a vote on the certification of President Joe Biden's election win after former President Donald Trump's "Stop the Steal" rally to stoke false election fraud claims, Republicans — nearly all of whom voted against an independent, bipartisan commission to investigate the Capitol riot — took turns at a press conference ahead of the January 6 committee's first hearing criticizing Pelosi.

Stefanik, who was elected by the party to replace Rep. Liz Cheney as the head of its conference after the Wyoming Republican voted to impeach Trump over the riot, claimed that Pelosi blocked the appointments of Reps. Jim Jordan, R-Ohio, and Jim Banks, R-Ind., to the panel because she "doesn't want the American people to know the truth or learn the facts."

"It is a fact that on that December of 2020, Nancy Pelosi was made aware of potential security threats to the Capitol, and she failed to act," Stefanik said.

"The American people deserve to know the truth — that Nancy Pelosi bears responsibility as Speaker of the House for the tragedy that occurred on January 6th," she continued. "And it was only after Republicans started asking these important questions that she refused to seat them."

Republicans have increasingly tried to claim that Pelosi oversees the Capitol Police and blame her for the security problems that allowed the mob to invade after Trump held a massive rally to push his election lies. But as an Associated Press fact-check explained, Pelosi has no day-to-day oversight of the department. Pelosi after the attack faulted a "failure of leadership at the top" and the top three security officials at the Capitol resigned over the security failure.

"We know that the person primarily responsible for the insurrection that occurred on Jan. 6 is the former, twice-impeached President of the United States Donald Trump, who incited that riot; urged people to march on the Capitol; [and] whipped them up by perpetrating the big lie — which by the way, he still hasn't walked away from," he told reporters on Tuesday.

House Minority Leader Kevin McCarthy, R-Calif., also said at the news conference that "leadership at the top failed" to protect Capitol officers, though he did not respond to questions about why Pelosi bears responsibility but not then-Senate Majority Leader Mitch McConnell, R-Ky.

"Now that the bipartisan Select Committee is beginning its work, the only tools left in House Republicans' arsenal are deflection, distortion, and disinformation," Pelosi's office said in a statement.

"Those rioters, those protesters, were there in part to assassinate Nancy Pelosi," Jeffries told reporters. "What does Kevin McCarthy not get about that?"

The first hearing by the January 6 committee made clear why Republicans have been so eager to derail the investigation and deflect blame. Capitol Police Officer Harry Dunn, who is Black, recounted being bombarded with a "torrent of racial epithets" by Trump supporters and describing Trump as the "hitman" who "sent them." Metropolitan police officer Daniel Hodges described rioters carrying "thin blue line" flags who attacked police as "terrorists" who attempted to "influence the policy of a government by intimidation or coercion."

Metropolitan police officer Michael Fanone described being beaten, tased, and threatened with his own gun by the pro-Trump mob and lit into Republicans who have tried to downplay the attack.

"The indifference shown to my colleagues is disgraceful!" he said, slamming his desk. "Nothing — truly nothing — has prepared me to address those elected members of our government who continue to deny the events of that day, and in doing so, betray their oath of office. Those very members whose lives, offices, staff members I was fighting so desperately to defend."

Capitol Police Sgt. Aquilino Gonell said the officers did everything they could to protect everyone at the Capitol but Trump "instead of sending the military, instead of sending support or telling his people, his supporters, to stop this nonsense — he egged them to continue fighting."

Trump recently described the bloodhungry mob as a "loving crowd."

"It's upsetting," Gonell said when asked about the comment. "It's a pathetic excuse for his behavior, for something that he himself helped to create — this monstrosity. I'm still recovering from those hugs and kisses that day."