“Why don’t you listen to what I have to say?” 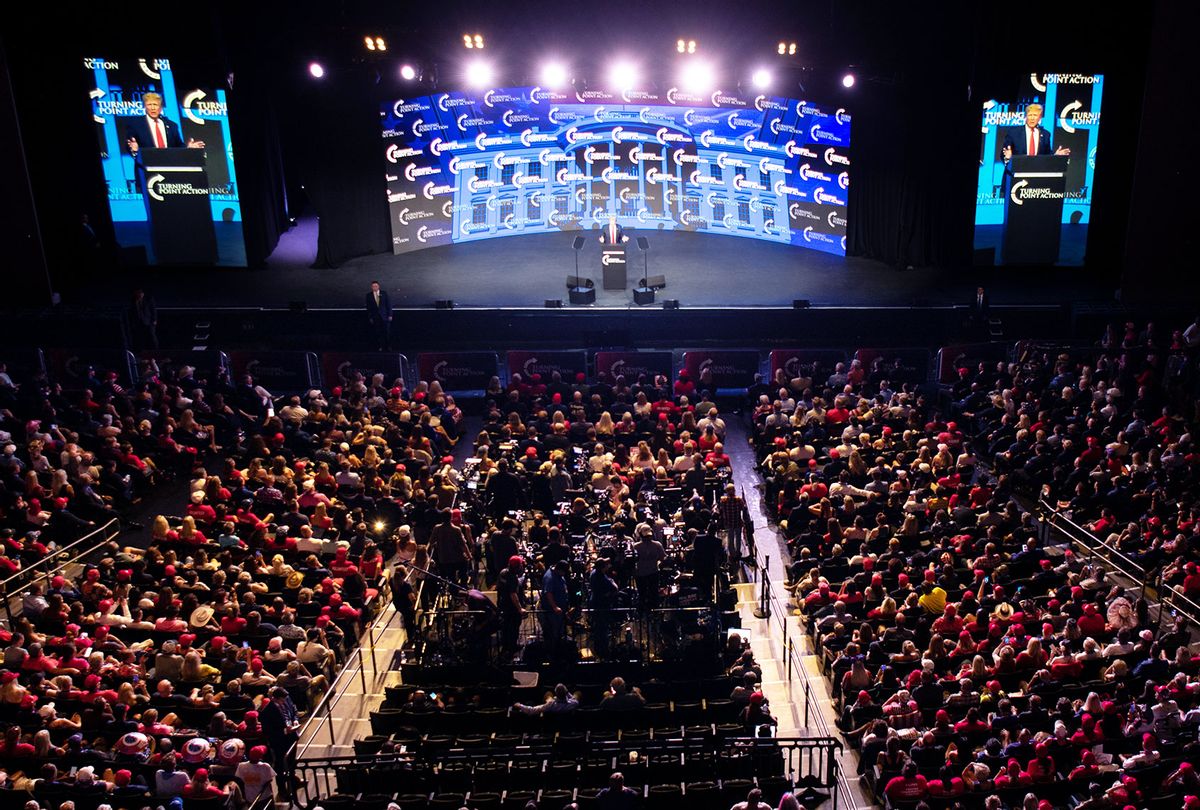 Arizona State Sen. Michelle Ugenti-Rita, a Republican, had a reporter escorted from a Trump rally in Phoenix after she was booed off stage by a crowd of Trump supporters. She then took to Twitter to double down.

"Why don't you listen to what I have to say?" she asked at a rally hosted by conservative youth advocacy group Turning Point USA and featuring Donald Trump. When Ugenti-Rita made an appearance, the crowd erupted into a chorus of boos.

"Listen," she begged, trying to calm the crowd down.

"Fine, okay. I am running to be your next Secretary of State," she told them, an admission that was matched with an even louder round of boos. "I'm going to win the primary. Thank you very much," she added, before walking off stage.

The kerfuffle likely stems from recent turbulence in the Arizona legislature, in which Ugenti-Rita serves as the chair of the Arizona Senate Government Committee, as Mediaite noted. Over the past several months, Ugenti-Rita has worked to shut down Arizona's GOP-backed election security bill (S.B. 1241), resulting in a personal feud between her and the bill's sponsor, State Sen. Kelly Townsend, a Republican.

By late June, Ugenti-Rita, a Republican who has long pushed for "election security" based on the right-wing voter fraud myth, had successfully quashed the bill over fears that it was ill-timed amid Arizona's 2020 general election audit, a patently partisan affair which has dragged on for months with no end in sight.

In response, GOP state Sen. Paul Boyer, who backed Ugenti-Rita's effort, received a sharp rebuke from Trump in a press release, though Trump did not specifically call out Ugenti-Rita. In his rebuke, the former president accused Boyer of doing "everything in his power to hold up the damning forensic audit of Maricopa County."

Ugenti-Rita has maintained that S.B. 1241 was legislation that was drawn up "for 'show." It "does nothing to strengthen election integrity," she said and was "introduced for self serving reasons."

"I won't support bills that fail to strengthen our election system," Ugenti-Rita added. "The same holds true for the audit. I supported the audit, but I do not support the Trump audit any longer. I wanted to review our election processes and see what, if anything, could be improved. Sadly, it's now become clear that the audit has been botched." She doubled down after being booed on Saturday.

Later during the event, it was reported that Ugenti-Rita pushed to have a man booted from the event after he accosted her backstage. The man asked her why "she killed Senator Kelly Townsend's election integrity bills in the Senate."

"Because it was bad," she responds.

The man, who has yet to be identified, was reportedly escorted from the premises by security.

"A so-called reporter was removed by police & event security from an event yesterday after repeatedly harassing me," Ugenti-Rita tweeted. Then [Sen. Kelly Townsend] encouraged him to break the law by committing trespassing by re-entering the building to continue to harass me."

She also linked to an article from The Gateway Pundit, a far-right news site that alleged the man works there.