Do you actually need to salt eggplant in advance? 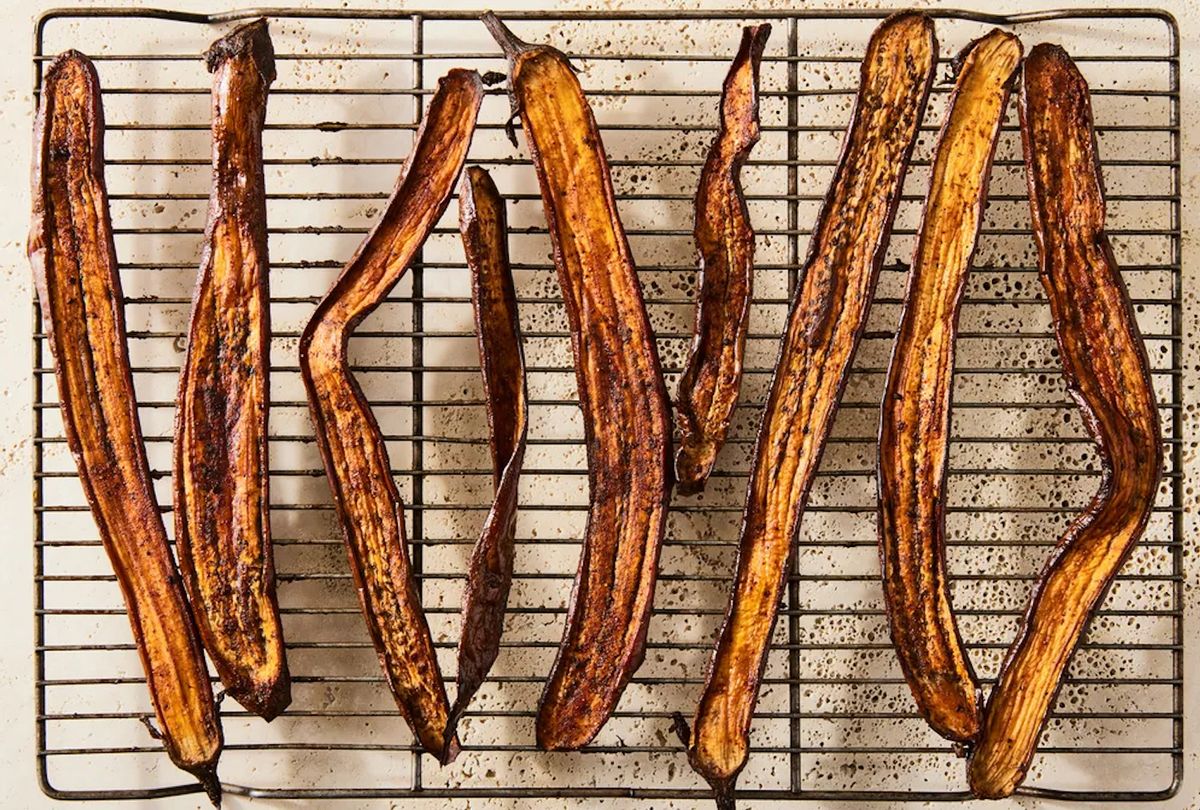 In The Kitchen Scientist, The Flavor Equation author Nik Sharma breaks down the science of good food, from rinsing rice to salting coffee. Today: everything you ever wanted to know about eggplant.

Eggplant is both a fruit and a vegetable. Botanically and technically speaking, it's a fruit (eggplants are considered berries because they arise from flowers and contain several seeds). But most of us eat eggplants in savory dishes, so by that rule of usage, it becomes a vegetable (tomatoes and peppers also fall into this confusing category). Eggplant is also an emoji with naughty implications.

This vegetable goes by various names. In India (and in many countries in South Asia) where I grew up, they're called brinjals. In the U.K., the term is aubergine. And in America, we call them eggplants. The name is based on the white cultivar — a plant variety that's been selected by plant breeders because it displays certain characteristics that make it valuable (for example, in this case, a speckled purple eggplant that resembles an egg and lasts longer after harvesting).

How many varieties are there?

There are more than 10 varieties of eggplants, in several colors and shapes. Colors range from white to green to purple, with varying degrees of intensity. Some are solid in hue; others have speckled skin. There is variation in shape, too: bulbous globe eggplants, skinnier Japanese and Chinese eggplants, and plum-sized Thai eggplants.

Eggplants belong to the nightshade family (Solanaceae) that also includes tomatoes, potatoes, peppers, etc. All members in this plant family were originally toxic to eat because they naturally produce toxic substances called alkaloids. Perhaps you've heard some of these chemical names before, especially when talking about eating green tomatoes. Most of these toxic substances are destroyed upon cooking with heat and, in some cases, selective breeding (where plants are grown and picked for their positive traits). In eggplants, there are two toxic substances. Alpha-solanine and alpha-chaconine protect the plant from a host of attackers like bacteria. Alkaloids are famous for their bitter taste, and this is why you'll often see eggplant described as bitter. Can you eat raw eggplant? Well, it won't taste as nice as when cooked. And from a toxicity standpoint, an eggplant contains about 11 milligrams of solanine, and you would need to consum

How do I reduce eggplant's bitterness?

You've probably read that salting eggplant removes the bitterness. This is not accurate. For one, the alkaloids that taste bitter in eggplants are a bit large and can't simply come out via osmosis when salt is added. Instead, salt masks and reduces the perception of the bitter taste (salt mostly draws out liquid from the eggplant).

Both salty and bitter tastes have the ability to interact with each other when present in the mouth, with salt muting the taste of bitterness. Sweetness is another taste that can mask bitterness, which is why a lot of bitter pills are coated with something sweet. (Taste physiologists and scientists have determined that the five basic tastes — salty, sour, bitter, sweet, and savory — can interact with each other producing different outcomes.)

So, do you still need to salt eggplant in advance? To mask bitterness, not really. For the most part, farmers have selectively bred eggplants and picked varieties that tasted less bitter over the years. For most recipes, I just cut the eggplant and get cooking.

But what about frying?

This is the one occasion when I take the time to salt eggplant in advance. The two major components of an eggplant are water and air, so it makes sense to get rid of that water when you want to get a firmer, less soggy texture. I sprinkle a generous amount of salt over sliced eggplant and let it sit in a bowl for 45 minutes. Then I discard any drawn-out liquid, rinse the eggplant under cold tap water to get rid of any excess salt, pat it dry, and then proceed with the recipe.

How do I prevent browning?

Just like apples that turn brown after slicing, eggplants also contain the enzyme polyphenol oxidase. Sprinkling a few drops of lemon juice (or a different cooking acid like vinegar) will help prevent the slices from browning. This type of browning doesn't affect taste, and you won't notice it after cooking.

What flavors go well with eggplant?

If the eggplant you're working with happens to taste bitter, you can still hide it by adding a splash of lemon juice, lime juice, or vinegar. Fish and soy sauces also mask bitter flavors, and build umami along the way. Palm sugar, unrefined brown sugar, or a sweetener like maple syrup or honey will also help cover up any bitterness. And even if your eggplant isn't bitter to start out with, all of these ingredients beautifully complement the mild vegetable.

Why are eggplants often used as meat substitutes?

Eggplant is often described as meaty, and you'll frequently see it incorporated with meat to build up that textural profile. Think: eggplant stuffed with ground lamb or eggplant sautéed with beef.

But if you don't eat meat, eggplant can provide that chewy texture all on its own. Like tofu, this vegetable is essentially a sponge, effortlessly absorbing flavors. This makes it the perfect vehicle for savoriness.

Because of its shape and meatiness, eggplant is a popular substitute for vegetarian bacon. Is it a perfect replica? My honest answer is no. But it gets very close to the real thing — and is a delightful dish all its own, subtly smoky and super savory. Serve it in a tomato sandwich with lots of zhoug and mozzarella.