Is a Republican congressman trying to silence the media? 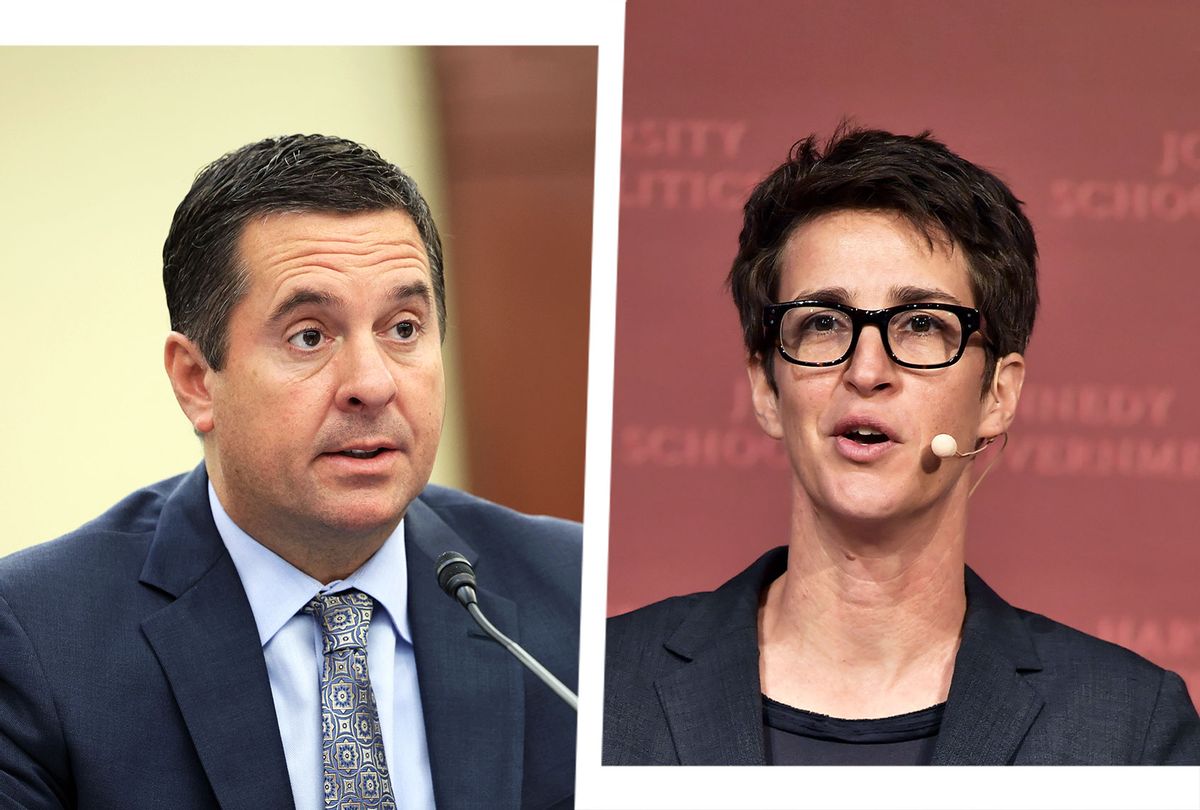 A previous version of this story erroneously identified Rep. Devin Nunes, R-Calif., as the chairman of the House Intelligence Committee. He is the ranking chair.

Rep. Devin Nunes, R-Calif., perhaps best known as one of Donald Trump's top toadies in Congress, keeps filing a string of unsuccessful defamation suits against media companies. On Tuesday, he added MSNBC and host Rachel Maddow to his list.

Nunes alleges that the liberal talk show host smeared him by pushing the notion that he colluded with the Russian government to undermine the 2016 election in Donald Trump's favor. According to a Bloomberg report, the chair of the House Intelligence Committee is seeking an unspecified amount of compensation for damages related to a segment of analysis back in March on "The Rachel Maddow Show." Maddow claimed during the segment that Nunes received a package in late 2019 from pro-Russia Ukrainian lawmaker Andriy Derkach but refused to reveal its contents to the House Intelligence Committee or the FBI, potentially making the lawmaker vulnerable to treason and obstruction of justice charges.

Nunes disputes this account in his lawsuit, alleging that he never opened the package from Derkach – a suspected agent of the Russian Federation who was and continues to be sanctioned by the U.S. Department of Treasury. According to his suit, Nunes instead directed the package to the FBI and notified then-Attorney General Bill Barr of its delivery.

Nunes further alleges that Maddow was, in fact, privy to these details but the network apparently ran a more damning story without asking for his comment. The congressman claims in his suit that he wrote a request to MSNBC back in April for Maddow's statements to be retracted or corrected, but the network didn't take heed of his letter.

"MSNBC and Maddow harbor an institutional hostility, hatred, extreme bias, spite and ill-will towards plaintiff due to plaintiff's emergence as the most prominent skeptic in Congress of Maddow's marquee news narrative from 2017 to 2019: that the Trump campaign colluded with Russians to hack the 2016 presidential elections," Nunes' attorney said in the complaint.

"Viewed as a whole and in the broader context in which they were published," the complaint continued, "the statements falsely accuse plaintiff of criminal conduct (obstruction of justice and treason), serious breaches of the Code of Conduct and violations of protocols concerning the handling of information that comes to the House Intelligence Committee from foreign sources such as Derkach, concealment and deception, lack of integrity and ethical improprieties."

The case is far from Nunes' first go-around when it comes to defamation suits.

Later that year alone, Nunes sued the likes of Esquire, The Fresno Bee, the Campaign for Accountability and CNN for alleged defamation. All of the suits were dismissed in their entirety. In the past, many commentators have characterized Nunes' legal offensives as SLAAP (strategic lawsuit against public participation) suits, which are designed primarily to chill the free speech of their targets by burdening them with lofty legal fees instead of adjudicating the conflict.