Triggered by words like "equity" and "inclusion," some conservatives see a secret agenda in infrastructure package 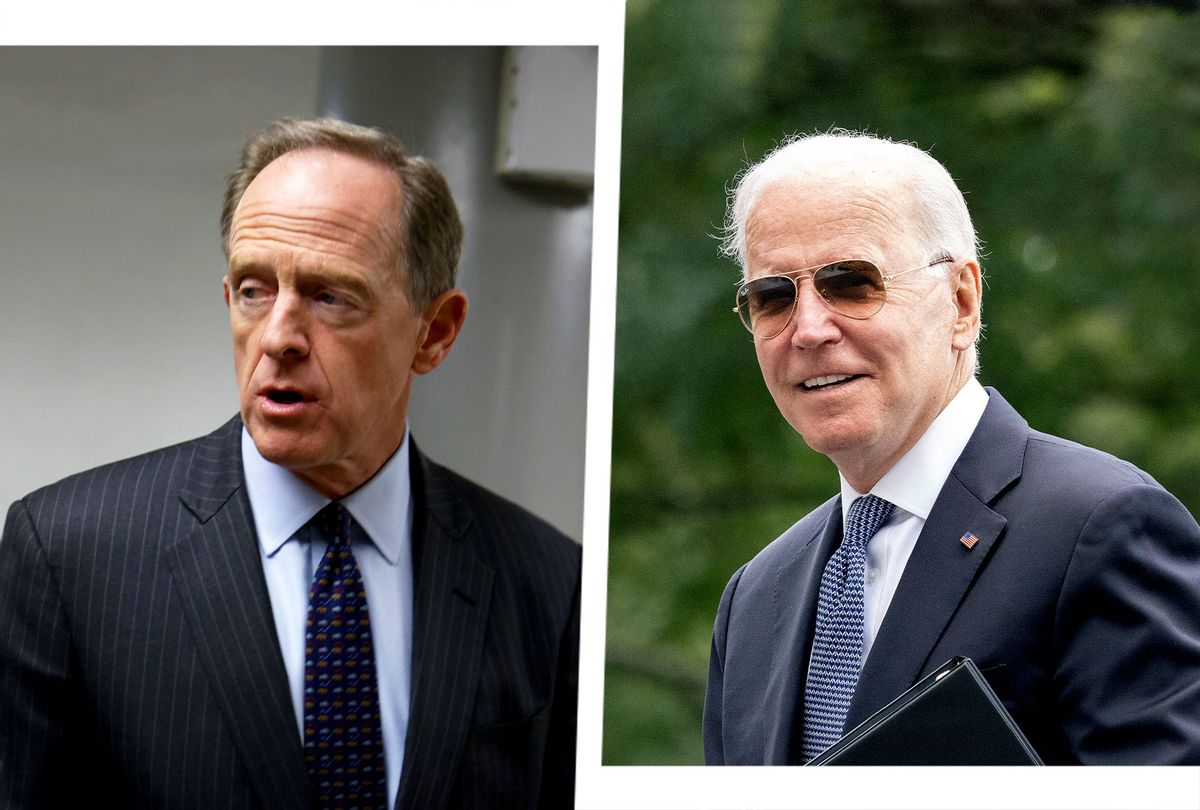 With President Biden's $1 trillion infrastructure bill, the result of arduous bipartisan negotiations, now inching its way through the Senate, some conservative pundits and politicians are of course seeking to undermine it. Their first line of attack appears to involve the measure's alleged "wokeness," focusing on keywords, phrases and provisions in the measure that supposedly reveal a hidden radical leftist agenda.

On Tuesday, during a Senate floor speech, Sen. Pat Toomey, R-Pa., took issue with a proposed amendment relating to public transit that would seek to ensure "equity of service to all riders taking into account historical and current service gaps." While there is considerable historical literature, along with more recent reporting, to support the argument that American transit systems have systematically underserved racial minorities, Toomey called the amendment's language "politically correct virtue-signaling."

Toomey continued, "This is people claiming that transit agencies are somewhat racist, and that we've got to, I don't know, we've got to make sure that escalators are not racist. It doesn't take a very fertile imagination to think about how this language could be used to host new requirements on agencies.

"If we adopted this," the senator added, "then decisions by transit agencies that should be guided by cost and ridership issues would end up being influenced by wokeism. I think the people who run transit agencies … don't need to be second-guessed by social engineers who are insisting that their agency is rife with racism."

Other conservatives had a bone to pick with the infrastructure bill's provisions relating to broadband internet, which aim to address what has been called "digital redlining," in which service providers opt out of certain areas they perceive as less profitable. This can result in poor-quality service or monopoly service in lower-income neighborhoods, which impacts employment and educational opportunities in marginalized communities.

On Tuesday, Breitbart published a report detailing the provisions in the measure's Digital Equity Act. The right-wing outlet noted that the act would ensure that "25 percent of the total grant amount shall be based on the number of individuals in the eligible State who are covered populations in proportion to the total number of individuals in all eligible States who are covered populations."

To translate that legislative language into English, "covered populations" refers to a wide range of communities and individuals, including the elderly, incarcerated people, military veterans, people with disabilities, people in rural areas and members of a racial or ethnic minority group.

Breitbart argued that this provision amounted to a "racial quota," which it clearly does not, but did not mention the historical or empirical basis behind it. A 2019 study by the National Digital Inclusion Alliance, for instance found that "AT&T systematically provided lower levels of broadband access to high-poverty neighborhoods" in Dallas than in higher-income areas.

Other right-wingers have evidently been triggered by words and phrases in the bill, selected seemingly at random or out of context. Conservative activist Christopher Rufo, perhaps the leading figure in the conservative assault "critical race theory," posted images of the bill's language on social media, highlighting whatever he found objectionable on a line-by-line basis.

"Critical race theory is infrastructure," he tweeted, calling out "transportation equity" and "digital equity [and] inclusion." He also took aim at the bill's proposed creation of a "Women of Trucking Advisory Board," intended "to encourage women to enter the field of trucking."

Others on the right have framed the bill in broader, more apocalyptic terms. Fox Business Network host and former Trump economic adviser Larry Kudlow — who earlier this year sought to stir up outrage over Biden's purported plan to transition the country to drinking "plant-based beer" (which, in fairness, is pretty much the only kind of beer) — has aired unfocused fears over what might be included in the Democrats' tagalong reconciliation bill.

"It will all be jammed into the reconciliation bill," Kudlow wrote in a Fox op-ed on Tuesday. "Amnesty for illegals may be part of it. Banning voter photo IDs could be part of it.

"There's no telling and for those of us who do not wish to transform America into a 'woke' driven exercise in central planning, regulating, critical race theory, cancel culture, end free enterprise vision, I think of it as Bulgaria before the Berlin Wall came down," he continued. "This proposed bill must be stopped. It is the number one priority for people of all stripes who love this country and want to save it."

Sen. Marsha Blackburn, R-Tenn., also joined in Wednesday, advocating for an amendment to revive the Keystone XL Pipeline project, which was canceled by the Biden administration in June.

"If Joe Biden cared about infrastructure, he would restart the Keystone XL Pipeline," Blackburn said in a press release. "Instead, Biden killed over 1,000 good-paying jobs by canceling the pipeline. For Biden, the infrastructure bill, just like the pipeline, is about appeasing AOC and the left's woke socialist agenda."

Despite this scattershot conservative opposition, the bill appears to be making headway through the Senate, and to this point probably has enough GOP support to reach the president's desk. But its progress has been bogged down considerably by hundreds of amendments filed this week, with the apparent aim of making final passage impossible before the Senate adjourns for its month-long recess next Monday. Majority Leader Chuck Schumer, who sets the Senate agenda, has promised to force a vote by then.