Eat your heart out, Donner party 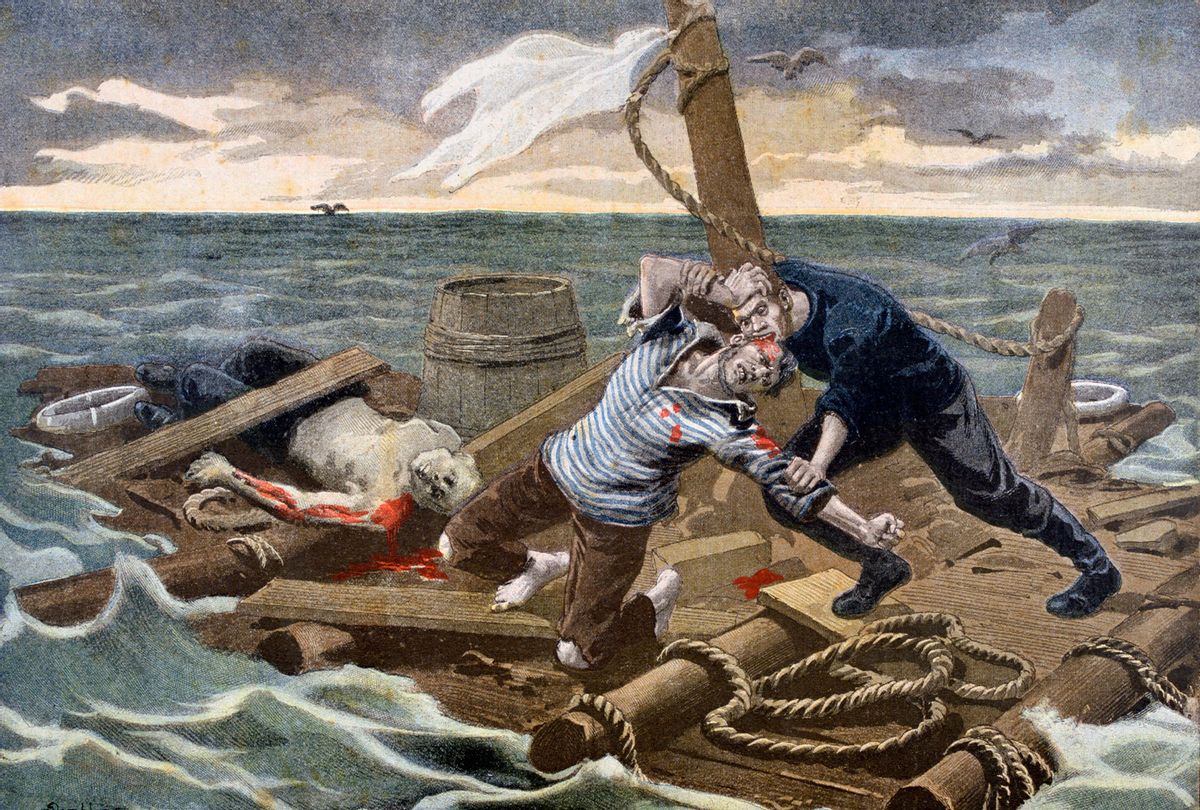 Desperate times call for desperate measures. And sometimes, when survival is at stake, that means human flesh is on the menu. According to William Seabrook, a journalist who nibbled on cooked human flesh during his travels to West Africa in the 1920s, "It was not like any other meat I had ever tasted. It was so nearly like good, fully developed veal that I think no person with a palate of ordinary, normal sensitiveness could distinguish it from veal." Here's a look at some cannibals who knew that taste intimately.

1. The settlers of Jamestown

The first year at Jamestown was rough. Founded in 1607, the English settlement was home to 104 settlers. Only 38 made it through the first winter. Disease, drought, and dismal farming conditions forced the colonists to depend on cargo shipments for food. Things only got worse with the arrival of 300 new settlers and, not long after that, the harsh winter of 1609, which came to be known as "The Starving Time." According to George Percy, a Jamestown settler, the conditions were so bad that people ate their own boots.

Others resorted to nibbling on their neighbors: "[N]otheinge was Spared to mainteyne Lyfe and to doe those things which seame incredible, as to digge upp deade corpes outt of graves and to eate them," Percy wrote [PDF]. "And some have Licked upp the Bloode which hathe fallen from their weake fellowes."

For decades, historians were unsure if Percy was exaggerating. But in 2012, archaeologists discovered the bones of a 14-year-old girl, her skull cracked open to remove the brain—evidence that she had been cannibalized.

2. Anybody who visited the doctor in the 17th Century

Not long ago, it wasn't uncommon to consume powdered mummies — as well as other human body parts — as medicine. According to Smithsonian magazine, "In the 16th and 17th centuries, many Europeans, including royalty, priests and scientists, routinely ingested remedies containing human bones, blood and fat as medicine for everything from headaches to epilepsy."

Apparently, few physicians stopped to think if this qualified as cannibalism. (Newsflash: It does.)

Either Alferd Packer was a victim of circumstance, or he was a cold-blooded murderer — it all depends on your perspective. Packer, a prospector and wilderness guide, led five men into the San Juan Mountains of Colorado in February 1874 in search of gold. Months later, he returned alone.

What happened is uncertain. At first, Packer claimed that his party got lost during a snowstorm. But this was clearly a lie, as Packer was carrying the belongings of multiple men. When questioned further, Packer changed his story: His party had perished along the trail, and they were forced — one-by-one — into cannibalism.

Was this a lie, too? When hikers traveled the path, Packer's story unraveled again: All five bodies were discovered near the same camp. Confronted a third time, Packer claimed that one of the travelers, Shannon Bell, had gone mad and killed the other men with a hatchet. Packer shot Bell in self-defense. He then consumed their flesh for survival.

It's unclear which version of events is true. A jury convicted Packer of manslaughter. Today, the pass where the men died is called "The Cannibal Plateau."

There are dozens of tales of cannibalism at sea, stories of desperate sailors clinging to life by gnawing on the bones of their dead shipmates. But the tale of the French frigate Méduse is among the most harrowing.

In early 1816, after the Napoleonic Wars gave France control of Senegal, the Méduse sailed south to Africa to take the reins of its new territory. But tragedy struck. Fifty miles offshore, the ship ran aground. It quickly dawned on the ship's 400 passengers and crew that there weren't enough lifeboats to save everybody.

Instead, those who couldn't fit into the lifeboats — 147 passengers in total — huddled onto a makeshift raft. (Some passengers, meanwhile, opted to stay behind with the frigate.) Initially, the raft was towed by the remaining lifeboats . . . until someone made the fateful decision to cut the ropes. For 13 days, the raft drifted aimlessly. People died — from murder, from being washed (and tossed) overboard, from starvation. Eventually, the survivors turned to cannibalism (and drank their own urine). By the time the raft was discovered, only 15 people were still alive. The tragedy would later inspire one of the biggest paintings of the 19th century, the 16-by-23-foot The Raft of The Medusa.

5. Lewis Keseberg and the Donner Party

The winter of 1846 and 1847 saw intense snowfall around the Sierra Nevada Mountains, with more than 25 feet of accumulation. So when the pioneers of the Donner Party (who not only had gotten a late start on their trek but had also lost valuable time taking a never-before-traveled shortcut) became trapped in the woods northwest of Lake Tahoe, they settled in tents and cabins and waited it out. The icy conditions soon killed their cattle and depleted their food supplies. It wasn't long before the pioneers were desperately chewing on rugs for sustenance.

It would get worse.

Months later, a rescue team arrived and was horrified to discover the camp littered with human remains. There, they found Lewis Keseberg preparing himself a meal of human organs — the lungs and liver of Tamsen Donner.

Of the 87 people who attempted the journey, 42 died. Around half of the survivors, including groups that hiked out in search of help, resorted to cannibalism. But it was the fate of Keseberg that would capture the public's imagination, as rumors swirled that he did more than eat the dead. Rather, some believe he had murdered his fellow travelers after acquiring a taste for human flesh.

In 1845, Sir John Franklin and his crew set sail to explore the Arctic, with the goal of finally finding the Northwest Passage. In September 1846, the expedition's two vessels —the Terror and Erebus — became icebound in the Victoria Strait, in Nunavut. This was likely expected; the sailors knew the ice in the Arctic froze in winter. What wasn't expected was the lack of a spring thaw. Their progress halted for more than a year as the ships drifted in the ice. Desperation set in.

Franklin died in June 1847, and eventually, his crew abandoned their ships and trekked across the ice toward the mainland. They would never be heard from — at least, not by Europeans —again.

Years later, the explorer Charles Francis Hall interviewed local Inuit who had heard about what had become of Franklin's crew. They explained that "a great many had their flesh cut off as if someone or other had cut it off to eat," Hall wrote. In 2015, researchers corroborated the Inuit's story when they found skulls and bones with cut marks consistent with cannibalism.

Before Hannibal Lecter, there was Levi Boone Helm. Called the "Kentucky Cannibal" because he was a native of that state, Helm was an all-around scoundrel from a young age. He wasn't afraid to settle petty squabbles with a bullet or a knife. He also wasn't one to let perfectly good protein go to rot.

Helm was an experienced survivalist who spent months at a time traversing the wilderness (often when on the run from the law). So when he killed a man, he wasn't afraid to take some human leftovers for the hard journey ahead: "Many's the poor devil I've killed, at one time or another," Helm is reported to have said, "and the time has been that I've been obliged to feed on some of 'em." (Helms didn't always kill for his meals. On one occasion, when a member of his party died by suicide, he ate one leg before chopping off the other and carrying it on the road.) After a long career of mayhem and murder, Helm was caught and executed in 1864. Overall, it's believed that "The Kentucky Cannibal" killed at least 11 men — likely more. The number he snacked on is anybody's guess.