America talks big about "human rights": We should be ashamed of that hypocrisy

Our leaders spout rhetoric about human rights. Look around the world: Where have we lived up to those words? 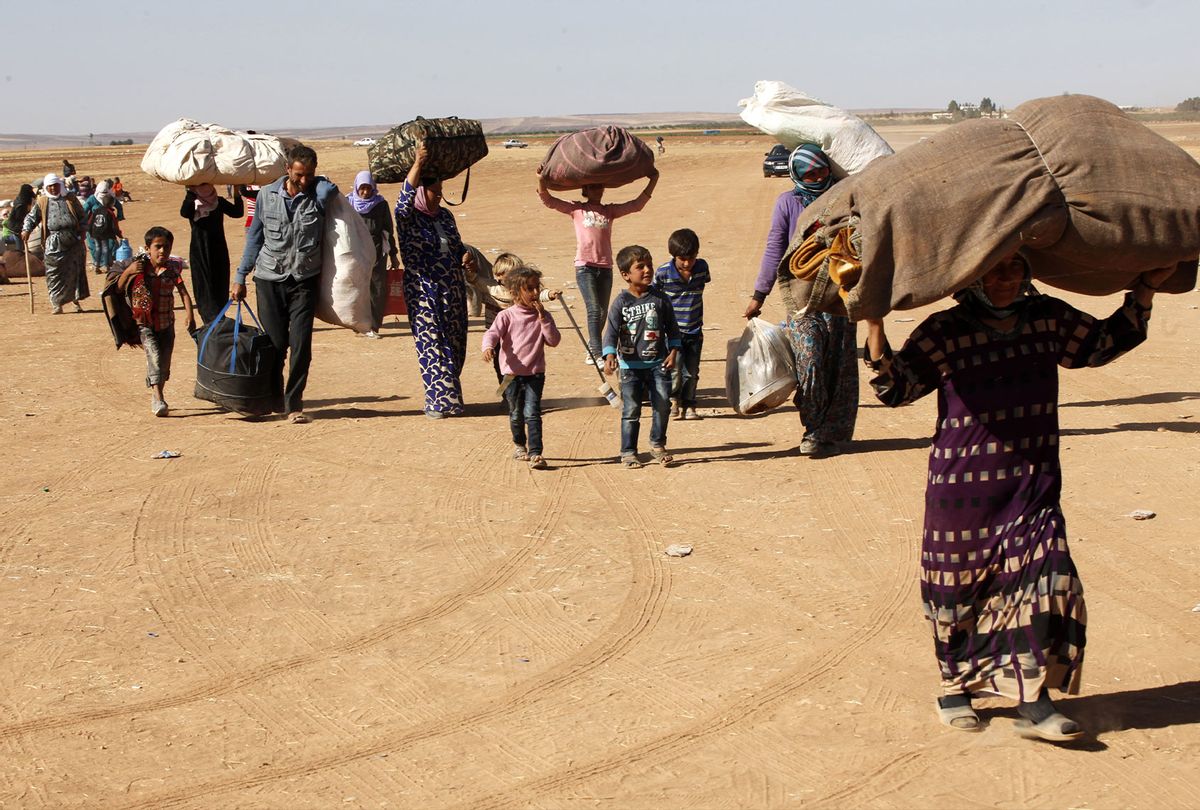 Syrian Kurdish refugees walk with their belongings after crossing into Turkey from the Syrian border town of Kobani on September 26, 2014 near the southeastern town of Suruc in Sanliurfa province, Turkey. (Stringer/Getty Images)
--

Human rights: It's a term tossed around all too easily, a hollow piece of rhetoric practiced mostly in the breach, a faux cliché uttered in fragile times. It's a mantra lacking moral conviction and humane behavior, a way to cover the shame of failed promises, a salve without resolve spread by self-righteous, glib politicians at podiums and to the media. It's a hollow claim that enables us to believe we are an "exceptional" country. It's a lie in the face of multiple human tragedies in which we are complicit. These are tragedies that we fuel, facilitate, ignore, without asking ourselves how committed we are as a nation to the imperative of human rights.

I come to it when I think about how we abandoned the people of Vietnam, Laos and Cambodia who helped us during that dreadful war in Southeast Asia, and then tried to do the same thing to the Afghan people who worked at the U.S. embassy or for American contractors and the American military, lessened in its shameful practice (but not eliminated) only because of public outcry.

I come to it when we were silent about what Saudi Arabia has done in Yemen, and in its embassy in Turkey, and when our silence did not help end the atrocities in Syria. Of course I understand the politics of non-action no matter where it occurs, but when politics trumps humanity I shudder.

I come to it when a kid is tased by cops for going through some bushes to see his girlfriend, when Black men are shot in the back and Black women are shot in bed.

I come to it when women are denied agency over their own bodies and jailed for "infanticide" when they miscarry.

I come to it when we fail to make the connections between poverty, policy and practices, whether in schools, courtrooms, jails or other institutions, for surely housing, food security, safety from judicial harm, appropriate quality health care, a decent and equal education and a livable planet are all basic human rights.

Surely there is something inhumane about the Bezoses and Zuckerbergs of the world accumulating billions of dollars of wealth while paying no taxes while the poohbahs of parliaments think earning a livable wage is too much to sanction and legislate.

The fact that almost 7 million people in the world live in abject poverty, according to World Vision — often situational, generational or geographic — while wealthy nations like ours look the other way, illuminates the hollow rhetoric of "human rights." It is also shameful that the United States has the fourth highest poverty rate in the world, at nearly 18%, and the largest income inequality gap in the world, according to the Brookings Institution.

According to the UN Universal Declaration of Human Rights, a milestone document in the history of that concept, there are two kinds of human rights violations: those committed overtly by the state, and those in which the state fails to protect against human rights violations. These violations can be civil, political, economic, cultural or social in nature. Civil rights include the right to life, safety and equality before the law, while political rights include the right to a fair trial and the right to vote.

Economic, social and cultural rights include the right to work, the right to education and the right to physical and mental health. These rights relate to things like clean water, adequate housing, appropriate health care, non-discrimination at work, maternity leave, fair wages and more.

Just take a look at that list of human rights and then try convincing me that we haven't violated, and do not continue to violate, each and every one of them, all the while claiming that we champion "human rights."

Nelson Mandela and Martin Luther King Jr. are often quoted on the issue of human rights, reminding us of our failures to protect these rights. Mandela asked that we remember that "to deny people their human rights is to challenge their very humanity." King admonished us to never forget that "a right delayed is a right denied."

Wise words, all. But how sad that we need to hear them over and over again, and that we still fail to instill them in our hearts and our policies.

For me, the words of Eleanor Roosevelt resonate most: "Where, after all, do universal human rights begin?" she asked. Her answer: "In small places, close to home — so close and so small that they cannot be seen on any maps of the world. ... Such are the places where every man, woman and child seeks equal justice, equal opportunity, equal dignity without discrimination. Unless these rights have meaning there, they have little meaning anywhere."

Would that we take those words to heart at every level of our private and public lives.