"The amount of suspicion I had about him ... could fill the Grand Canyon" 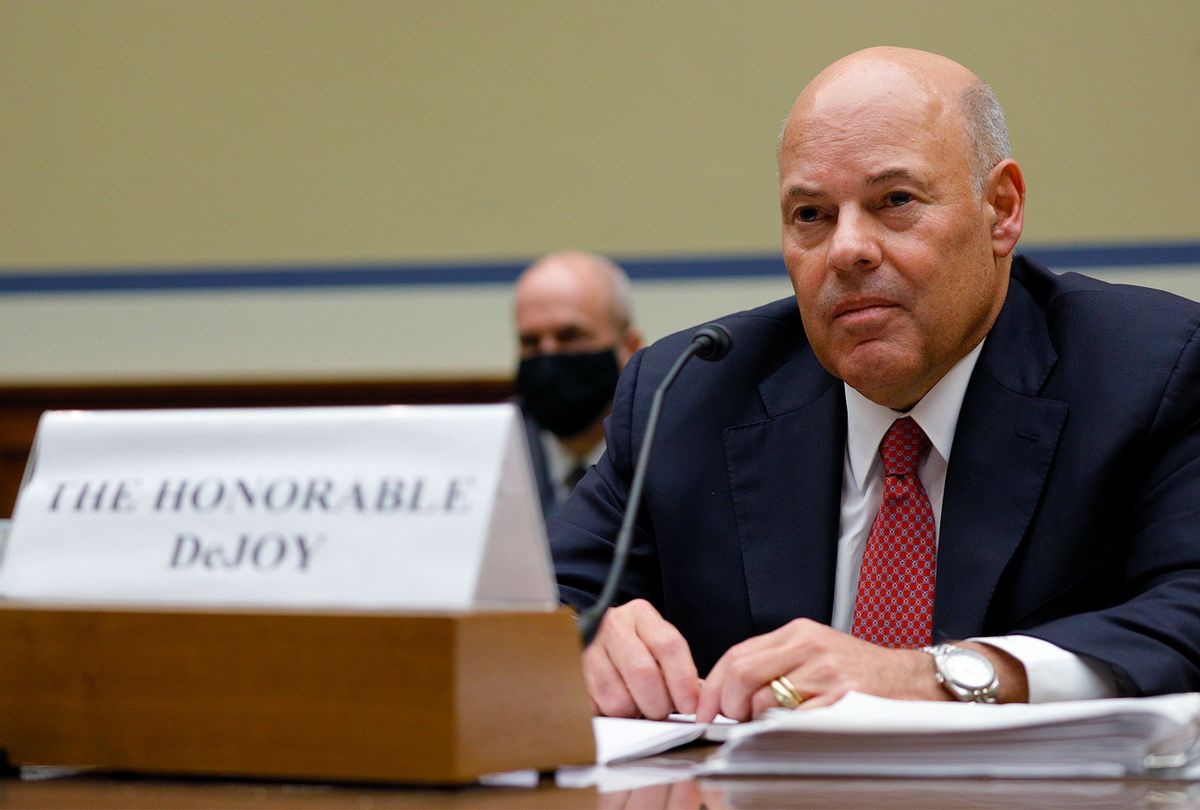 U.S. Postal Service Postmaster General Louis DeJoy testifies at a House Oversight and Reform Committee hearing in the Rayburn House Office Building on August 24, 2020 on Capitol Hill in Washington, DC. The committee is holding a hearing on "Protecting the Timely Delivery of Mail, Medicine, and Mail-in Ballots." (Tom Brenner-Pool/Getty Images)
--

U.S. lawmakers and ethics advocates on Friday reiterated calls for firing Postmaster General Louis DeJoy after The Washington Post revealed that the United States Postal Service awarded a $120 million contract to XPO Logistics, a company he helped run and "with which his family maintains financial ties."

"Louis DeJoy is a walking conflict of interest," declared Rep. Gerry Connolly (D-Va.). "He had no business being named postmaster general, and he has no business continuing to serve."

"It's long past time to #FireDeJoy," added Connolly, chair of the House Subcommittee on Government Operations, which has legislative jurisdiction over the Postal Service.

Connolly was far from alone in responding to the report by calling for DeJoy's removal.

"How in the world is Louis DeJoy still the postmaster general?" asked Rep. Joe Neguse (D-Colo.). "It is long past time to #FireDeJoy."

DeJoy's personal spokesperson referred most of the newspaper's questions to USPS—whose spokesperson "said that DeJoy did not participate in the procurement process for the XPO contract, which was competitively bid." The company's spokesperson noted that XPO was not awarded some other contracts it sought.

Under the contract that XPO got, it will take over two centers that organize and load mail. Dena Briscoe, president of the American Postal Workers Union branch for Washington and Southern Maryland, told the Post that the move felt like a "slap in the face" to workers.

"This is the work that they've been doing for years and years and years," Briscoe said, "and you're going to segregate it away from them, put in another building, give it to a company that previously had a [top executive] that is now our postmaster general. A lot of our members are taking offense to that."

The new contract will deepen the Postal Service's relationship with XPO Logistics, where DeJoy served as supply chain chief executive from 2014 to 2015 after the company purchased New Breed Logistics, the trucking firm he owned for more than 30 years. Since he became postmaster general, DeJoy, DeJoy-controlled companies, and his family foundation have divested between $65.4 million and $155.3 million worth of XPO shares, according to financial disclosures, foundation tax documents, and securities filings.

But DeJoy's family businesses continue to lease four North Carolina office buildings to XPO, according to his financial disclosures and state property records.

The leases could generate up to $23.7 million in rent payments for the DeJoy businesses over the next decade.

Although the leases to XPO were cleared by government ethics officials before DeJoy took office last year, some experts are still critical—such as Virginia Canter, chief ethics counsel at watchdog group Citizens for Responsibility and Ethics in Washington (CREW).

"There's no question he's continuing to profit from a Postal Service contractor," Canter said. "He can comply with these technical legal requirements… but it does create an appearance issue about whether it's in his financial interest to continue to make policy that would benefit contractors like XPO."

Friday's calls for the USPS Board of Governors to fire DeJoy are just the latest from the past year. He has been accused of slowing down mail service before the 2020 election and now faces a criminal probe over GOP political donations; DeJoy has denied any wrongdoing on both fronts.

DeJoy's "14-month run as postmaster general has been a masterclass in cronyism and deception," Rep. Jimmy Gomez (D-Calif.) said in response to the Post reporting. "The amount of suspicion I had about him and his efforts to intentionally undermine delivery times at [USPS] could have filled the Grand Canyon. The Board of Governors should #FireDeJoy."

Rep. Bill Pascrell (D-N.J.), who led previous calls for the board to oust the postmaster general, said Friday that "Louis DeJoy should've been fired long ago for his sabotage of USPS. He is under federal criminal investigation and now may be using your post office to wet his beak. The postal governors protecting him need to be fired first. This is an outrage."

DeJoy is spearheading a controversial 10-year reform plan for USPS that would involve cutting hours, slowing first-class delivery, and raising prices—an approach that has also provoked demands for his immediate ouster.

The 10-year plan was a key focus of a Board of Governors meeting Friday—the first that included all three members appointed by President Joe Biden and confirmed by the Senate.

"Ronald Stroman, the former deputy postmaster general and one of Biden's nominees, took the most aggressive approach in criticizing DeJoy's plan, saying the delivery slowdowns would hinder the agency's ability to provide prompt and reliable service without federal funding," reported Government Executive.

According to the outlet:

He said the plan is "strategically-ill conceived, creates dangerous risks that are not justified by the relatively low financial return, and doesn't meet our responsibility as an essential part of America's critical infrastructure." USPS expects to save about $170 million annually from the changes, a small fraction of its operating budget.

"There is no compelling financial reason to make this change," Stroman said. "The relatively minor savings associated with changing service standards, even if achieved, will have no significant impact on the Postal Service's financial future."

Stroman accused DeJoy and the existing board members of abandoning the customers most loyal to and dependent on the Postal Service and said the plan would accelerate people and businesses turning away from the mailing system. He added that "rarely, if ever," has a USPS policy change received such widespread pushback.

DeJoy, for his part, acknowledged to the board that the plan involves some "uncomfortable changes," while doubling down on it: "We are confident we are headed in the right direction."

Sen. Tammy Duckworth (D-Ill.) disagrees. In a March letter urging DeJoy's firing, she wrote that his "pathetic 10-year plan to weaken USPS demonstrates that he is a clear and present threat to the future of the Postal Service and the well-being of millions of Americans, particularly small business owners, seniors, and veterans, who depend on an effective and reliable USPS to conduct daily business, safely participate in democracy, and receive vital medication."