N.C. GOP candidates struggle to out-Trump each other — who will be the Biggest Loser? 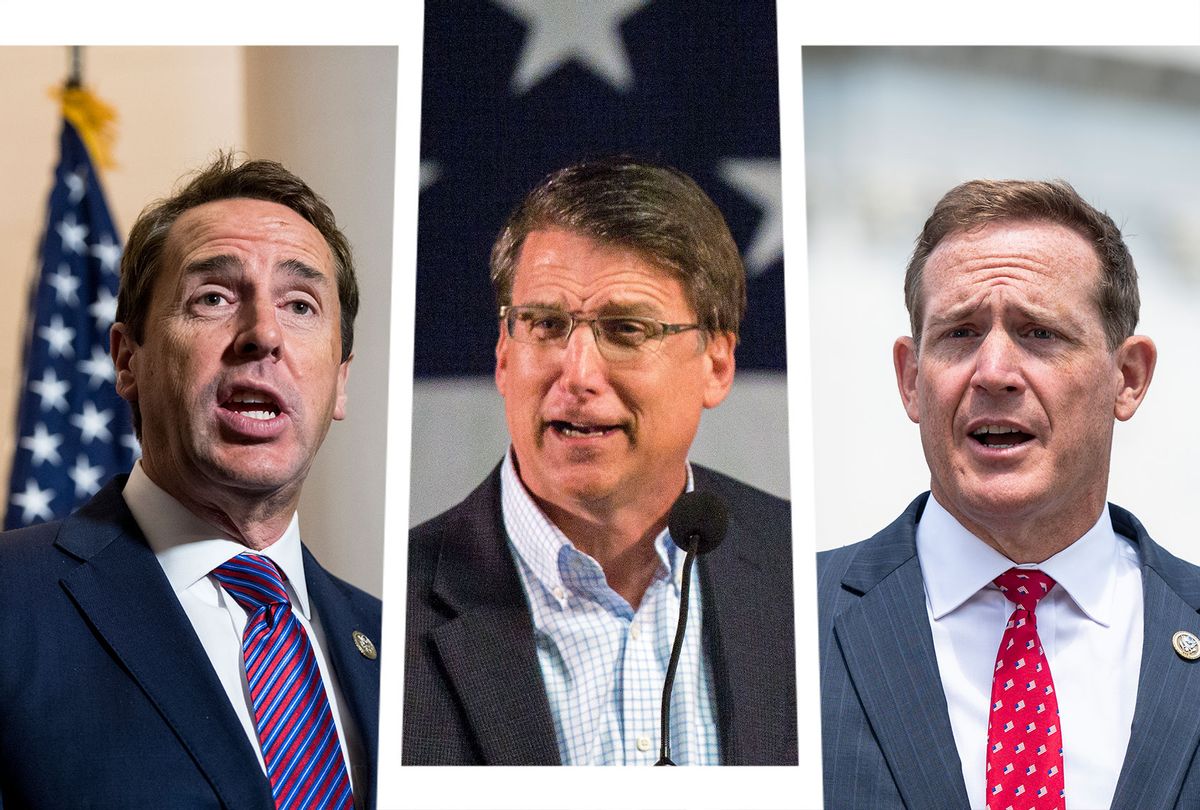 Republican infighting has derailed the U.S. Senate primary campaign in North Carolina, as candidates seek to undermine their opponents and win over Donald Trump's loyal base — even as some Republican operatives think that could be disastrous in next year's general election in the critical swing state.

Trump first teased a potential Senate run by Lara Trump, his daughter-in-law, who ultimately declined to join the race. Then the former president upended the primary campaign during an appearance at the state's Republican convention in June. Despite staying out of other statewide primaries where candidates have fallen over themselves to out-Trump their opponents, the former president made a surprise endorsement nearly a year before the primary election, backing Rep. Ted Budd over former Rep. Mark Walker, a longtime Trump supporter, and former Gov. Pat McCrory.

"Everybody was blindsided, including the Walker and McCrory campaigns and maybe even Budd," Andrew Taylor, a political science professor at North Carolina State University, said in an interview with Salon.

Budd, a two-term congressman who supported a lawsuit seeking to overturn Trump's election loss and voted against certifying President Joe Biden's Electoral College victory after the Jan. 6 Capitol riot, has seen a major boost in the polls and fundraising since the announcement.

"I don't know if I believe in game-changers in politics, but that's as close as you can get to one," Chris Cooper, a political science professor at Western Carolina University, said in an interview with Salon. "That was huge."

Walker, who also backed the election lawsuit and has tried to position himself as the most pro-Trump candidate in the primary, accused former White House chief of staff Mark Meadows, a longtime fixture in North Carolina conservative politics — and his former intra-party rival when both were in Congress — of having "orchestrated" the endorsement. Walker has suggested that Meadows never told Trump about a straw poll of delegates at the state GOP convention that showed Walker leading Budd by 44% to 29%.

"How did President Trump get the endorsement so wrong at the convention?" Walker complained during a subsequent Republican luncheon.

At the convention, Trump also took a not-so-veiled shot at McCrory, the former governor who has been critical of Trump's false claims of election fraud, despite crying fraud himself after narrowly losing his own 2016 re-election bid.

"You can't pick people who have already lost two races and do not stand for our values," Trump told the convention audience.

Michael Bitzer, a political science professor at Catawba College, described that as "a subtle dig at the former governor," but said in an interview with Salon that Walker was undoubtedly hurt worst by Trump's endorsement: "It may come down to Budd and McCrory being the big fight going into the primary next year."

Walker has gone on the offensive since the convention, repeatedly attacking his opponents as unelectable, which has launched a round of name-calling, prompting allies of other candidates to depict their opponents as losers who can't win a general election.

"I don't see how [Budd] can win a general election," Walker told Politico in June, calling it a potential "Roy Moore situation," referring to the failed Alabama Republican Senate candidate who lost to Democrat Doug Jones in 2017 after facing numerous decades-old allegations of sexual assault and misconduct.

With the Senate evenly split and a number of tight races on the horizon, North Carolina's race to replace retiring Republican Sen. Richard Burr could easily determine which party controls Congress next term.

Despite failing to win Trump's endorsement, Walker has continued to court Trump's base and echo the former president on Twitter, criticizing McCrory as a "career politician who has lost more statewide races than he's won" and for having "attacked conservatives including President Trump."

"If Pat wasn't good enough for Trump's administration, he's not good enough for NC," Walker tweeted, touting himself as the "most conservative and pro-Trump" member of the state's congressional delegation.

But the state's sitting GOP senators are not on board. Burr, who is retiring after three terms in the Senate — and who, perhaps not coincidentally, was one of the seven Republican senators who voted to convict Trump at his second impeachment trial — has privately told "everyone" that "McCrory is the only one that can win the general election," Politico reported in June, and has criticized Walker's "anemic" fundraising.

Burr also said he was surprised that Trump endorsed Budd so early in the race. "I can't tell you what motivates him," he told Politico. "I've never seen individuals endorse a candidate a year before the primary. That's unusual."

Fellow Republican Sen. Thom Tillis, who survived a tight re-election race last year, has publicly said he has "no support for Mark Walker," who threatened to primary him in 2020, and doesn't think he's "right for the job."

In an interview with the Raleigh News & Observer, Tillis slammed Walker for his "lack of body of work and lack of name ID and lack of fundraising acumen," predicting that "the biggest indirect supporter of financial support for Walker will come from Chuck Schumer and Democrat interests that would like to see him win the primary" because he's not a "credible" general election candidate.

Tillis also made sure that an NBC News report in May noted that he left Walker off his list of "viable candidates" and continued to trash-talk him in a Politico interview in June.

"If I were Mark Walker," he told the outlet, "I would not have run for the Senate because I could not see a path for myself."

McCrory, a favorite of the party's establishment who is best known nationally for signing the anti-LGBTQ  "bathroom bill," has tried to position himself as the only electable candidate in the field.

"If Republicans want a majority in the U.S. Senate, they will nominate Pat McCrory," Jordan Shaw, an adviser to the former governor, told Politico. "Otherwise, Democrats are going to take this seat and keep the majority."

But the quarrel between Trump and McCrory, who has the highest name recognition in the race, could kneecap his chances of winning over a very pro-Trump Republican base. That has already become evident in the money race: McCrory's early fundraising edge largely evaporated after Trump backed Budd.

When the North Carolina Republican Party sends out fundraising emails, "Donald Trump is almost always mentioned in the first paragraph, if not the first sentence," Cooper said. "So clearly, Donald Trump is the de facto leader of the Republican Party in North Carolina. … I think the best hope McCrory has is that Walker and Budd split the hardcore Trump MAGA vote and that McCrory gets the small government, big business, banking, almost-a-libertarian conservative vote."

While Walker and Budd openly battle for the pro-Trump lane, McCrory has said he would welcome Trump's support but appears to be hedging his bets, likely believing that the Trump brand would be a burden in the general election.

Paul Schumaker, a consultant for McCrory, recently circulated a memo using private Republican polling to warn that Trump's endorsement "will actually be a hindrance" to Republicans in a state that Trump won by just 1.3 points last year as suburban and unaffiliated voters abandoned him in droves, according to the Washington Post.

"McCrory has a built-in advantage having run statewide," Bitzer said. "So he has obvious name recognition. I think he would have a little more of the establishment party behind him. Budd and Walker tend to be much more the Tea Party, Trump conservatives of the party. But I've been surprised that Budd hasn't been able to capitalize more on that Trump endorsement."

Republican consultants are clearly worried that Trump's support could backfire in a general election. One North Carolina Republican strategist told The Hill that Trump backed "the losing horse" by backing Budd, predicting that he will "have a problem in the general." Another state Republican operative predicted that Democrats would "hang" Trump's endorsement "around our necks."

"It could hurt at the margins and, in an election decided at the margins, that could be crucial," Cooper said, noting that unaffiliated voters outnumber registered Republicans in the state.

While Budd has earned Trump's backing early in the race, keeping it is an entirely different matter. Trump's litmus tests for candidates change all the time, Taylor said, which could hurt Budd if Trump does anything controversial or pushes his allies into unpopular positions.

"The Trump litmus test for hardcore Trump voters could change and it might not be to the benefit of the Trump candidate," he said. "If the Trump litmus test becomes more and more outrageous to mainstream Republicans, that's going to presumably help McCrory and change the dynamic as to how Walker and Budd present themselves.

"If you want to make Trump the sun that you revolve around," Taylor concluded, "then you better hope that he's doing things that are good for your electoral chances."