“Code red for humanity”: Most dire climate report in history poised to be ignored 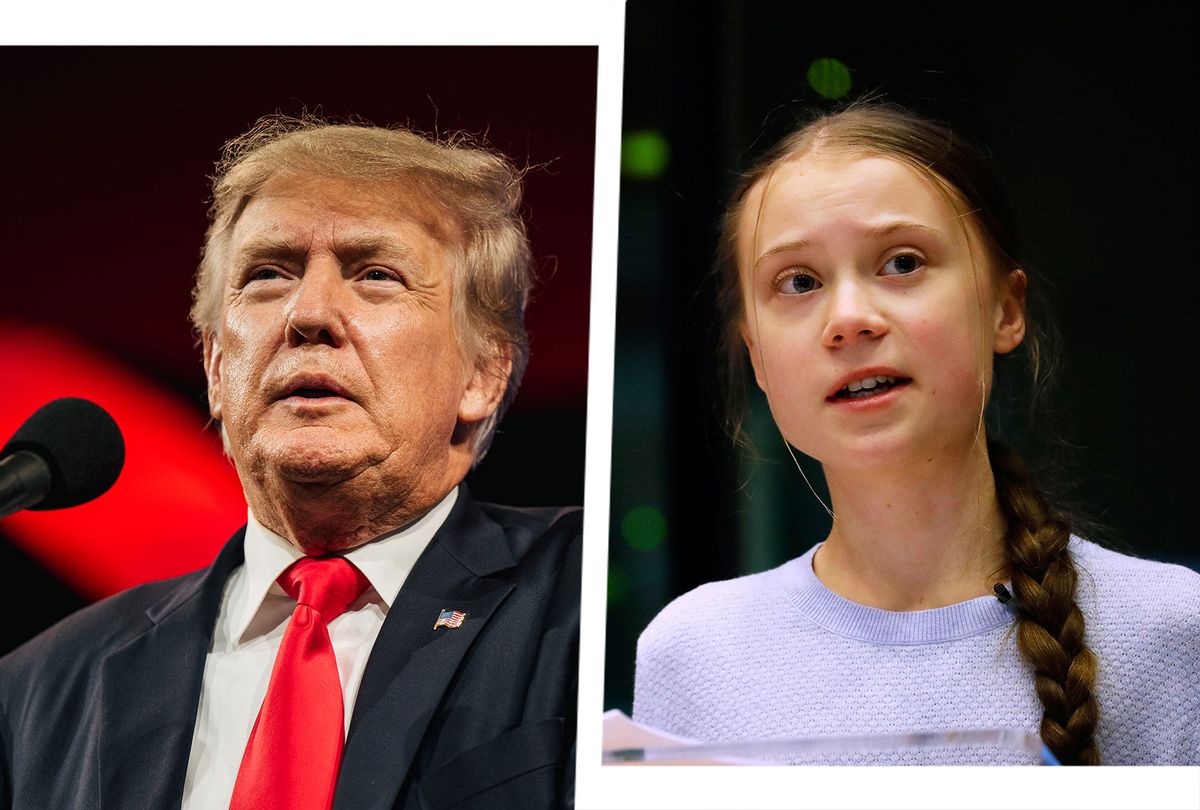 A United Nations-backed panel of climate experts issued its starkest warning yet in a report on Monday detailing irreversible climate change caused by human activity but expressed hope that there is still time to prevent its most devastating effects.

Temperatures rose more in the last 50 years than they have in the previous 2,000 years, according to the first Intergovernmental Panel on Climate Change report since 2013. The global temperature is expected to increase by 1.5 degrees Celsius, a longtime scientific benchmark, as early as 2030 — as much as a decade earlier than previously thought.

Without swift global action, the temperature is expected to continue to rise far higher by the end of the century. Rare extreme weather events will be more commonplace and may irreversibly alter climate systems. Part of the Atlantic Ice Sheet is expected to collapse. The rate of ocean rise has doubled since 2006 and could rise by seven feet by 2100 and even a 16-foot rise by 2150 "cannot be ruled out," the scientists said.

"We can expect a significant jump in extreme weather over the next 20 to 30 years," Piers Forster, a climate scientist at the University of Leeds and one of the report authors, told The New York Times. "Things are unfortunately likely to get worse than they are today."

It's the "strongest statement the IPCC has ever made," Ko Barrett, the panel's vice-chair and an advisor at the National Oceanic and Atmospheric Administration, told reporters on Monday.

The report, which was compiled by 234 scientists based on more than 14,000 studies and approved by 195 governments, said that human activity, particularly the burning of fossil fuels and land clearing, was "unequivocally" the cause of such rapid climate changes.

Republicans, however, have long opposed legislation to rein in CO2 emissions, arguing that they would economically hurt the oil and gas industry, whose firms often donate millions to their campaigns. Former President Donald Trump mocked climate change as a Chinese "hoax." More than 130 Republican members of Congress have expressed skepticism about humans' role in the escalating crisis. Sen. Ron Johnson, R-Wisc., suggested last month that climate change was "bullshit." And a recent Gallup poll found that just 32% of Republicans believe that global temperature rise is the result of human activity, down from more than half two decades earlier.

But the IPCC report said that though humans' influence on climate change was once a scientific hypothesis it is now "established fact" and the evidence is "overwhelming."

Recent extreme weather across the United States and the world shows that the problem can no longer be dismissed as hypothetical. Many deadly temperature extremes, like the record-breaking heat that hundreds in the Pacific Northwest and Canada this summer, "would have been extremely unlikely to occur without human influence on the climate system," the report said.

"It's now become actually quite obvious to people what is happening, because we see it with our own eyes," Corinne Le Quéré, a professor of climate science at the University of East Anglia and one of the report authors, told The Washington Post. "You don't have to have a PhD. You don't need to be a climate scientist. You just need to be a person who looks out the window."

Such extreme weather conditions will become more frequent. A heatwave that occurred once every 50 years now occurs every 10 years, the panel said. If the global temperature rises by 1.5 degrees, these heatwaves will occur every five years and be even hotter, the panel said. If the temperature increases by 4 degrees by the end of the century, these heatwaves will become annual.

Studies also show that a 1.5-degree global temperature increase will lead to water shortages caused by severe droughts, increase the frequency and severity of hurricanes and cause certain animal and fish species to become extinct.

For the majority of people who have trusted decades of climate science, the report "contains no real surprises," tweeted activist Greta Thunberg, who has been repeatedly attacked by Republicans for sounding the alarm on climate change. "It confirms what we already know from thousands previous studies and reports - that we are in an emergency… We can still avoid the worst consequences, but not if we continue like today, and not without treating the crisis like a crisis."

"We must act decisively now to keep 1.5 alive," he said, calling for the findings to "sound a death knell for coal and fossil fuels, before they destroy our planet."

The panel modeled different outcomes based on potential action or inaction taken by governments. Even its best-case scenario predicts that the global temperature will increase by more than 1.5 degrees, at least temporarily. By the end of the century, the temperature rise will likely range between 1.4 degrees and 4.4 degrees, though it could increase as much as 5.7 degrees.

"Today, I, and so many other young people, wake up enraged — the IPCC report is apocalyptic, catastrophic, and nothing we haven't been screaming from the rooftops for years," Varshini Prakash, the executive director of the Sunrise Movement, said in a statement. "Our politicians shouldn't need a report to tell them how bad things are. We're already living it."

The report shows that much of the carbon emissions that have caused the temperature increase have come from burning fossil fuels. Only reducing emissions to net zero and ultimately net negative values by replanting trees and using carbon capture technology could prevent global temperatures from continuing to rise.

"The IPCC report underscores the overwhelming urgency of this moment. The world must come together before the ability to limit global warming to 1.5 degrees Celsius is out of reach," special climate envoy John Kerry said in a statement. "As the IPCC makes plain, the impacts of the climate crisis, from extreme heat to wildfires to intense rainfall and flooding, will only continue to intensify unless we choose another course for ourselves and generations to come."

While Republicans have long downplayed the human role in climate change, conservative parties around the world have been far quicker to acknowledge reality.

"Today's report makes for sobering reading, and it is clear that the next decade is going to be pivotal to securing the future of our planet," British Prime Minister Boris Johnson said in a statement. "We know what must be done to limit global warming – consign coal to history and shift to clean energy sources, protect nature and provide climate finance for countries on the frontline."

While the report largely echoed climate scientists' findings in recent years, the tone of the report marked a significant departure from the last report in 2013, which described a 1.5-degree rise as a far-off possibility. The new report painted a more dire picture, describing the last decade as the hottest in 125,000 years and warning that glaciers are melting at a rate "unprecedented in at least the last 2,000 years." Atmospheric levels of carbon dioxide are the highest they've been in 2 million years.

The report comes just months before the major COP26 climate conference in Scotland after the previous report served as a basis for negotiations ahead of the Paris climate accord. Scientists estimate that existing policies will put the world on track for a 3-degree rise by the end of the century, highlighting the fact that most of the biggest economies in the world are still not on track to meet the temperature targets set out in the deal.

"I think a key message here is that it is still possible to forestall most of the most dire impacts, but it really requires unprecedented, transformational change," Barrett, the panel's vice-chair, told NPR. "But the idea that there still is a pathway forward I think is a point that should give us some hope."

President Joe Biden earlier this year laid out a plan to reduce emissions to net-zero by 2050 but the administration acknowledged that even that might not be enough.

"The target that the Biden-Harris administration articulated earlier this year is the most ambitious ever in U.S. history," Jane Lubchenco, the deputy director for climate and environment at the White House Office of Science and Technology Policy, told NPR. "This report is telling us we need to be ambitious. We probably need to be even more so."

Senate Democrats on Monday introduced a $3.5 trillion budget bill that includes billions to boost clean energy, create a Civilian Climate Corps, and impose new polluter fees on methane and carbon imports, among other measures. The bipartisan infrastructure bill that was advanced by the Senate over the weekend also includes billions to expand electric vehicle charging stations.

"If Senators truly followed the science in this report, we'd have 100 votes for climate action to match the 100 percent certainty that human-caused climate change is destroying our planet," said Sen. Ed Markey, D-Mass., who chairs a Senate subcommittee on the climate. "This report must be the final warning to the world that time has run out to save the planet from dangerous and irreversible climate change."