Why they're scared of Greta: Youth climate activist has the trolls in retreat 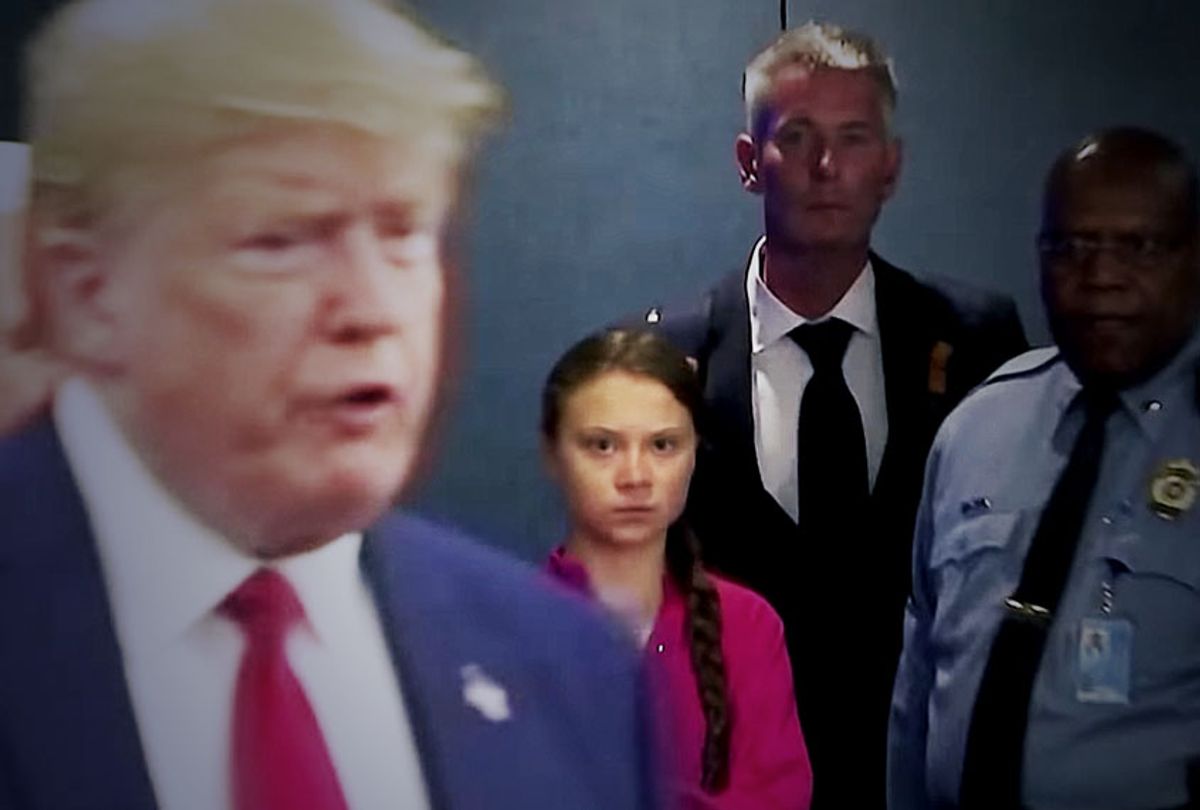 Modern-day conservatism, especially the Republican Party, functions primarily as a protection racket for the fragile egos of mediocre white men. After witnessing the right-wing reaction to Greta Thunberg, the teenage climate activist from Sweden who spoke at the United Nations this week, there can be no doubt of this. The modern-day conservative was revealed, in all his glory, as a weak-minded coward who hides behind unearned privileges, because he is incapable of handling a fair-minded debate, much less real moral accountability.

Thunberg's trip to the U.S. for the UN Climate Action Summit had, before this week, already been a remarkable success. The 16-year-old's steely-eyed courage has helped inspire kids across the country — and the world — to join her call to strike from school last week and stand up for more aggressive action to combat the climate crisis.

On Monday, Thunberg finally gave her speech before the UN and, for those who haven't yet seen it, it was a doozy. She accused world leaders of betrayal and warned that the "eyes of all future generations are upon you, and if you choose to fail us, I say we will never forgive you."

(As a note: Yes, you can read a transcript of the speech, but it really helps to watch the video, because Thunberg's passion and clarity is powerful and sobering.)

Naturally, of course, right-wingers reacted in the ugliest way possible: By arguing that Thunberg's identity — as a young person, as a person on the autism spectrum and, although they are careful not to say this directly, as a girl — inherently discredits what she has to say. Even though Thunberg is capable of doing things many on the right refuse to do — such as read and understand scientific evidence — the argument is that Thunberg and her fellow youth activists cannot think for themselves.

On Fox News, Michael Knowles of the right-wing outlet Daily Wire, in full grumpy-old-man mode, described Thunberg on Monday as "a mentally ill Swedish child who is being exploited by her parents and by the international left," a statement so ugly that even the network was forced to denounce it.

It's a bit unclear, however, what Fox News was apologizing for, since Knowles' argument is just a blunter version of what all their pundits have said about Thunberg.

Laura Ingraham compared Thunberg and other climate activists to "Children of the Corn," a Stephen King story about children brainwashed into a murderous cult.

Industry-backed climate change denier Marc Morano argued that Thunberg is "causing and instilling fear in millions of kids around the world," as if the anxiety were anything but a rational reaction to real world events. He also compared climate science to "medieval witchcraft."

The New York Times, in a stunning demonstration of bad judgment, let climate-change denier Christopher Caldwell write an op-ed complaining that "a 16-year-old is not a legally responsible adult," and trying to discredit her by saying "she is diminutive and fresh-faced, comes off as younger than her years."

Of course, Donald Trump had to get in on the action, talking down to Thunberg with a sarcastic tweet that was the equivalent of telling her she'd be pretty if she smiled more.

All of these attacks say almost about Thunberg or the other kids — some as young as elementary age — who have correctly called out adults for failing to do more to slow climate change.

These attacks speak to conservatives' dependence on irrational social hierarchies that determine who is "right" or "wrong" not by virtue of evidence or reason, but based on who has more social power due to age, gender or social class. Thunberg and her youth activist cohort strike fear into the hearts of right-wingers precisely because they have uncovered the lie that age automatically grants wisdom.

Just by doing her thing, Thunberg has exposed the way climate-change deniers hide behind their unearned privileges to assert themselves as authorities on a topic where they are literally denying basic scientific facts. To borrow Morano's metaphor, climate-change deniers are reminiscent of witch hunters in the past, who hid behind the Bible and the authority of their gender in order to persecute innocent women.

When liberals understandably lashed out at these insipid, ad hominem attacks against Thunberg, some conservatives shifted their tactics towards false claims that Thunberg and her allies are hiding behind her age, using youth as a shield from criticism. Professional troll Charlie Kirk added a charge of hypocrisy, since those same liberals who were supposedly claiming that you "can't" criticize a 16-year-old also criticized a group of high school kids in January who were videotaped in MAGA hats acting like jackasses after an anti-choice protest in Washington.

This would be an argument, I guess, if anyone was actually assert a blanket "you can't criticize kids" argument. In reality, criticizing the Covington students and supporting Greta Thunberg share a common assumption, which is the exact opposite of Kirk's claim. In both cases, teenagers are fledgling moral actors, and, as such, deserve to be taken seriously when they make political statements.

In fact, there's an entirely consistent argument here. The Covington kids were old enough to be held responsible for their actions. Greta Thunberg is old enough to be considered a rational actor whose arguments hold weight.

To put it another way, no one is saying you can't criticize a teenager. But the "criticisms" of Thunberg are nothing more than ad hominem attacks and vitriol, thrown out there in a desperate attempt to hide the fact that the right has no substantive argument on the climate crisis.

We saw the right pulling the same trick with the Parkland kids, pretending that liberals were "using" the students for nefarious political purposes. In fact, young people are standing up on issues like climate and guns for the simple reason that they are the people most under threat.

Conservatives are, as usual, the ones being inconsistent here. When kids express right-wing views, they are assumed by conservatives to be responsible actors thinking for themselves. able to think for themselves. When they support progressive or liberal causes, they are accused of being puppets. The fairest response is to see both conservative and liberal kids as responsible for their own opinions, and to give credit or condemnation appropriately.

Ultimately, it's good to see grown men so afraid of a teenage girl speaking truth to power. It's a reminder that conservatives know, on some level, that their authority is a house of cards, and that they don't deserve all the deference they get simply by being white, male or old. Thunberg represents the possibility of looking past rules that treat young women as inherently inferior and not worthy of respect. She demands that we take people's arguments and beliefs seriously, instead of dismissing them based on perceptions rooted in identity. Conservatives understand one thing clearly —they will not do well in a world where what you say and do matters more than who you are.