On the ground with the youth protesters leading today's Climate Strike

Salon writers across the US report back from the Climate Strike 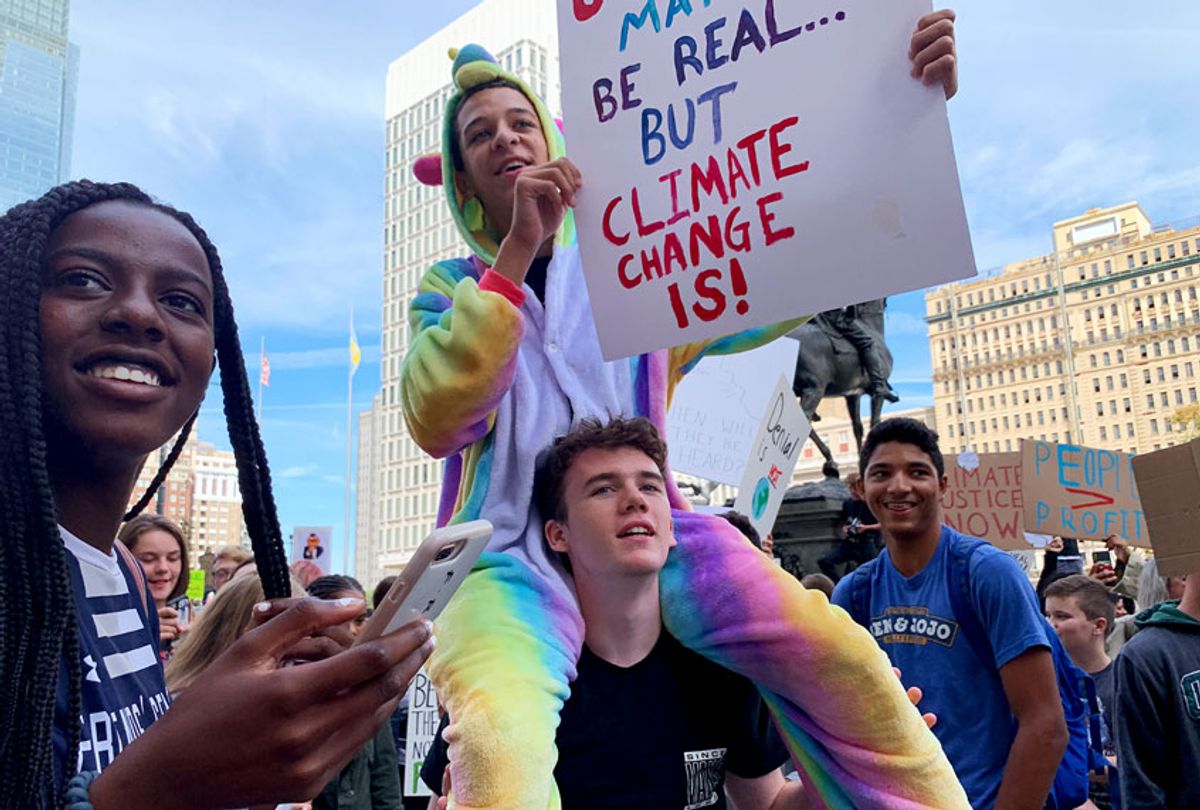 Students attend the climate strike at Philadelphia City Hall. Philadelphia was just one of the dozens of cities in which young people went on strike. (Amanda Marcotte)
--

Millions of activists, mostly young people, poured into the streets on every continent on Earth for a day of protest and awareness-raising over the climate crisis. In many American cities, schools gave students permission, implicit or explicit, to skip class to attend. The preponderance of young activists was appropriate, given that the young will have to suffer the bulk of climate change–related crises; or, as one protest sign put it: "You'll die of old age and we'll die of climate change."

The overall protest movement painted a picture of young activists demanding systemic, rather than individual action — specifically, the end of the age of fossil fuels. The protests were timed to raise awareness in advance of the United Nations Climate Change Summit on September 23.

While it is impossible to know turnout with precision, organizers estimate that around four million worldwide participated as of Friday afternoon. Children rallied in the Solomon Islands; young people  stormed the environment ministry in Bangkok, Thailand; and millions took to the streets in U.S. cities, marking a historic moment in global eco-solidarity. Salon staff reported back from different cities on what they saw.

Nicole Karlis: Like everywhere, climate change in the Bay Area is personal and classed. For the last two years we have had to wear respirator masks to protect ourselves from intense wildfire smoke, a result of rising temperatures making forests and meadows more flammable. The fires affect the rich differently than the poor:  many tech workers are granted "smoke days" and can work from home or take the day off, while outdoor laborers are exposed to unknown health risks.

While the San Francisco Bay Area has a long history of fighting climate change —  the city of San Francisco often makes "greenest city" lists — our politicians are often not really that committed to being "green." Indeed, not all of San Francisco's city and California's state politicians are in favor of legislations that put climate justice first. This is why the San Francisco Climate March started at House Speaker Nancy Pelosi's office at the Civic Center. (Recall, Pelosi says she only "welcomes" the “enthusiasm” behind the Green New Deal, but has in her own way, passively dismissed it.) From Pelosi's office, they went to Bank of America, BlackRock and Pacific Gas and Electric Company, and ended at the Embarcadero which is where I caught up with the march. At their last stop, young speakers took the stage to give speeches and read poems. One young woman asked the crowd: "Do you want to live in a world where 50 percent of the species we have today are dead, because all we did is sit in our bed and wait around for the world to end?"

Climate change and the science of it is often jargon-riddled, but I think simple articulations like this are more powerful.

The Bay Area strike was organized by the local organization Youth vs. Apocalypse. In an interview, one member, 13-year-old Maya Butler, told me she felt hopeful because of the turnout. "It was really hopeful to see all these people fighting for climate justice," she said. "If we don't have climate justice, we don't have a future, if we don't solve this climate crisis none of my descendants, myself, or my peers or my community, will have a future."

Others who were of age to vote told me they were there to support the youth — which was striking, really, as today was really all about ensuring a future for today's youth. "I'm here because young people asked us to show us, they have legitimate demands and the last we could do is show up," Irene Dick-Endrizzi, an adult who lives in the Haight, told me. "I took off work for this."

Amanda Marcotte: In July 1903, the famous labor leader Mother Jones led the March of the Mill Children, in which tens of thousands of textile workers, many children, went on strike to protest the lack of child labor laws at Philadelphia City Hall. At the same location, 116 years later, the children went on strike again, this time to fight climate change.

I was fully prepared for the youth climate strike to be full of the same aging leftists that dominate most of these events. But while the gray heads in “Democracy Now” T-shirts and middle-aged people in keffiyehs were there, the crowd was, as advertised, mostly a bunch of kids: College kids trying to look cool, high school kids falling all over each other, and even junior high and elementary school kids holding signs under the watchful eyes of parents.

I have never been at a protest where I could actually see over the heads of the crowd, but for once, I was a head taller than half of them.

The mood of the kids was giddy and nervous — but determined. Giddy because they were playing hooky from school and, being kids, were squealing and engaging in horseplay, thrilled to be out with friends having an adventure. Lots of awkwardness of youth trying to figure out the protocol of this new situation.

Above all, however, they were determined. There was absolutely no doubt among the under-25 set that climate change is a threat to their futures — or that their elders were to blame for the situation.

“The adults in the room finally need to fight for our futures and fight for our health and safety,” Sophia Zaia, who was helping register teens and young adults to vote at the Sunrise Movement table told me.

“Vote them out! Vote them out!” a group of high school students started shouting during the march. It was a plea as much as a chant — children, who literally are not allowed to vote, begging those of us who are to do better.

Mother Jones and her child marchers, I felt, would be proud.

Keith A. Spencer: One of the things I love about Generation Z is that they have an uncanny ability to communicate in a manner that is at once wry, funny and urgent. I think being raised on social media and memes made them all into PR masters. For instance, two signs that I saw in Portland today: "If you were smarter, we'd be in school," and "If the world ends, how are we gonna watch 'Spongebob'?" Both do a good job of mixing the high and the low, encapsulating the vast existential threat of climate change and the quotidian day-to-day tasks and pleasures that will be moot if civilization ends.

In Portland, protesters marched from city hall, on the west side of the Willamette River, over the Hawthorne Bridge to the Oregon Museum of Science and Industry east of the river. It is hard to get a sense of scale for these kinds of thing, but suffice to say the crowd was so vast that it took several hours for everyone to move that distance. One estimate was 20,000 people; I would guess, based on what I saw at the museum grounds, that about sixty percent were under 25 years old.

Outside the museum in a sanctioned space, activists circulated past a number of booths, both from food vendors and various activist groups, including 350.org's Portland branch and the Democratic Socialists of America (DSA). Many of the signs pointed towards the systemic and explicitly economic origins of the climate crisis; one sign by the DSA booth read, "There are 100 people responsible for the climate crisis" — referencing a recent study that found that 100 companies are responsible for 71% of all emissions globally. I was enthused by the emphasis on the systemic and class-based origins of the climate crisis, rather than the milquetoast and frankly neoliberal individual "solutions" to climate change — like avoiding plastic straws —that have come to dominate liberal discourse recently.