"No more 'Indian in the Cupboard'": "Reservation Dogs" is the new direction of Native storytelling

From Taika Waititi and Sterlin Harjo, the FX on Hulu comedy stars four teens who pull hilarious heists on a rez 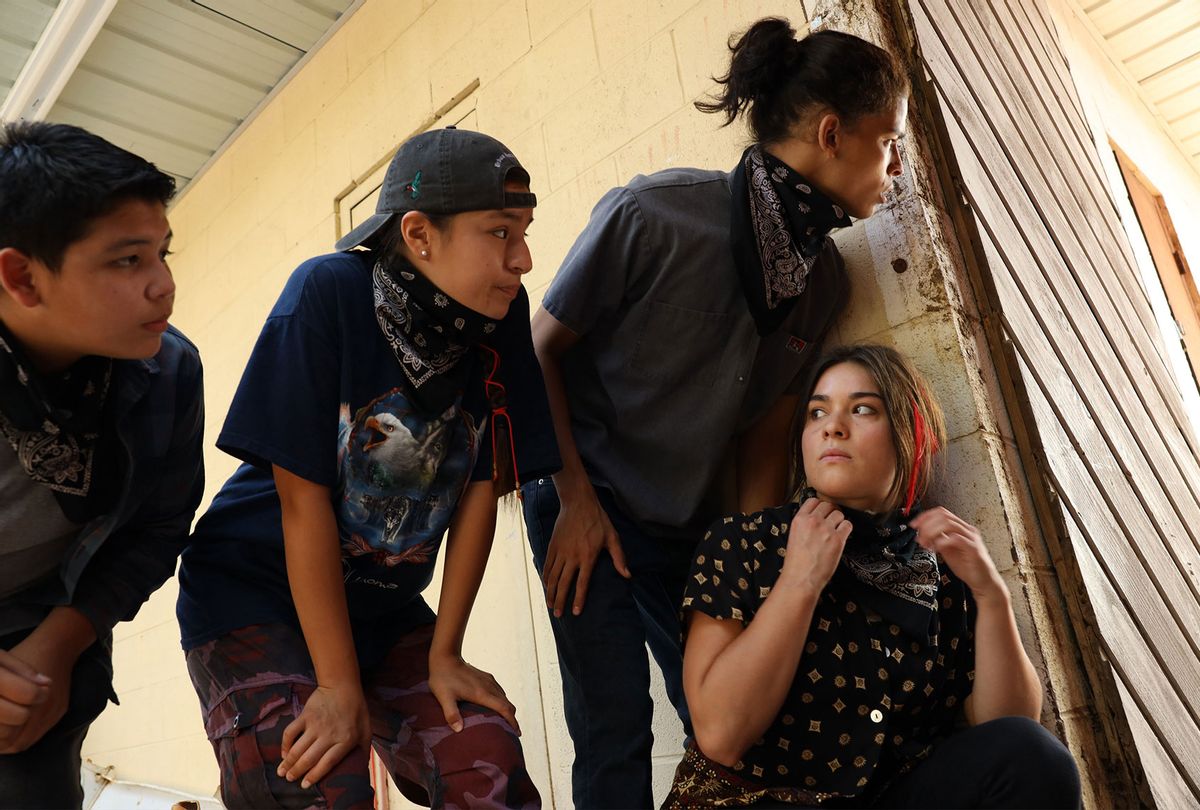 The Sterlin Harjo and Taika Waititi-created project deliberately and excitingly diverges from its catalog of predecessors in storytelling about Native people.

"There was a time where the content had to be depressing," Waititi said, speaking on a panel before the Television Critics Association last week. "We don't want to depress people because there's so much humor in our communities. There's so many jokers."

As storytelling about Native people written and portrayed by Native people grows and expands, it's because of projects like "Reservation Dogs" that non-Native people's sole perception of Native culture will no longer be rooted in tragedy and white-washed mysticism. "No longer will we have to empathize with 'The Indian in the Cupboard,'" observed Jacobs, referring to the film adaptation of the children's book about a young boy befriending a toy-sized 18th-century Iroquois chief who comes to life through a magical cupboard.

Meanwhile, the fun heists on "Reservation Dogs" give way to painting a deeper picture of the teens' lives. They're simultaneously trying to fight off the boredom of life on the reservation, reckon with grief after the death of their friend one year ago, defend their place in town against a rival teen "gang" and experience the coming-of-age growing pains familiar to teens of all backgrounds, really.

Bear and Elora Danan (yes, named after the baby from "Willow") are set up as the leaders of the "Reservation Dogs" gang. They may be best friends, but there's often tension between the two and their conflicting priorities. Elora is dead set on getting to California, while Bear is often more easily distracted, especially when it comes to his seeking the attention of his absent father, out-of-work Native rapper Pumpkin Lusty (Sten Joddi), or conflicts with his mother, Rita (Sarah Podemski), a loving single mom seeking the perfect stepfather for her teenage son, while shrugging off the overtures of just about every man in town.

Willie Jack and Cheese are their backup, with subtle, perfect comedic timing: when the gang suggests Bear is suffering from depression after he's particularly quiet one day, Cheese is quick to chime in that "depression affects one in five Native Americans." Before that, when neighborhood kids tell Willie Jack they have no friends to publicize the rez dogs' chip-selling street business to, she simply tells at them to "make some."

As universal as teen coming-of-age stories often are, "Reservation Dogs" isn't shy about being deeply and delightfully specific to Native people. From extensive references to previous onscreen portrayals of Native characters, to the sharing of family meat pie recipes, the show is an unsubtle celebration of Native culture.

Waititi told reporters that he recalled "negative feedback" about his early films, which criticized them for not having "enough culture specificity" and being "depressing," while also criticizing his work for "making fun." He said, "I get what's happening. All they want is to see us, like, riding whales, talking to trees."

"Reservation Dogs" is rife with jokes poking fun at white audiences' expectations of Native people as mystical tree-talkers. A non-Native Indian Health Services doctor embarrassingly calls his patients a "majestic people," and throughout the first episodes, Bear repeatedly hallucinates about a hilarious warrior from the battle at Little Bighorn who has some not-so-spiritual wisdom to impart.

As Salon's TV critic Melanie McFarland points out, the show taps into a level of cultural specificity that's typically been reserved exclusively for shows and movies centering white people, which rely on "the assumption that non-white people should be versed in white culture with no expectation of reciprocity." Well, no more of that in "Reservation Dogs."

Before bringing their dynamic characters to life, taking on roles that seem like they were made for them, Woon-A-Tai, Jacobs, Factor and Alexis were plucked from relative obscurity. When asked by the press about the frequent excuse from Hollywood creators who don't cast Natives because "we can't find them," Jacobs answered bluntly, "None of us live in LA."

And, as Harjo points out, historically, before Native-led and created projects like "Reservation Dogs," there weren't exactly a lot of attractive opportunities for Native talent in Hollywood. "Hollywood makes a Western every few years where Native actors get to come and get killed in front of a camp, and it's just not the most exciting work," Harjo said. "So they are not in LA, beating down the door, trying to get these parts."

He continued, "You have to go to these communities to find the actors. That's all ['Reservation Dogs'] did. We went and cast in the communities. We went and got tapes from all over Indigenous communities. The talent is there. It just doesn't happen to be on Hollywood Boulevard."

The actors are also noticeably bonded to their characters — especially Woon-A-Tai as Bear, the de facto leader (in his mind) of the Rez Dogs. "When I first read the script, right off the bat I found a connection with Bear," he said. He continued, "There's so many things I can relate to my life and Bear's life. Bear is a very loving person who cares a lot about his friends — these friends right here. I have the exact same feelings for them. This is my family."

It's clear from the young stars' presence on the panel that they share a real friendship and love of Native comedy. Jacobs recalled bonding with Alexis over their enjoyment of the Native sketch comedy group the 1491s, and the cast and producers described their love for Alexis' hilarious brothers and family of "comedians." Additionally, in the show's all-Native writers' room and main cast, Harjo emphasized how important it is to him that they worked together as a community.

While "Reservation Dogs" was conceived by Harjo and Waititi on the latter's kitchen floor over "late-night tea," it is firmly Harjo's show as the American in the creative partnership. Harjo was born and raised in Oklahoma, where the show is shot and set, and the many everyday storylines of "Reservation Dogs" are based loosely on the ups and downs of his childhood.

Waititi is of Maori heritage from New Zealand, and while he described sharing many experiences with Sterlin as Indigenous people, he emphasized that "it's not my place to make this show."

"I really believe people need to tell their own stories and especially from whatever area they are from," he said. Harjo is a member of the Seminole Nation and has Muskogee heritage. Waititi continued, "It just wouldn't have been appropriate if I had come in and been, like, 'Let's Taika‑fy this show.' It's stealing the story. It's [Harjo's] town." The extent of Waititi's involvement, he said, is to be "the one push this thing out into the water, and Sterlin was the one who paddled the boat and made sure that there weren't any holes in the bottom of it."

"Laughter is medicine": Comedy and reality over tragedy

"Reservation Dogs" is funny, but, in the best way possible, that doesn't mean it's mindless, fluffy escapism. Between mundane yet hilarious storylines at the local IHS clinic, and the kids' guilt that their theft of a grocery truck will indirectly cause the hood-winked truck driver to die of diabetes, the show isn't all heavy and depressing — but in its own way, it also doesn't shy from the realities of the under-investment of resources in Native communities and reservations, the inaccessibility of health care, the disparate struggles with addiction among Native people due to systemic racism.

The show's honest comedy, and even its deep specificity to Native experiences, is especially enjoyable because of its relatability, even to non-Natives, who can see their own culture-specific counterparts in the different storylines on the show. Anyone can relate to the dread of wanting to leave your boring, dead-end hometown, or the awkwardness of working on a group project (in this case, committing crimes to escape to California) with a friend who isn't taking it as seriously as you are, or a frustratingly slow day spent in the waiting room of the local emergency room.

"Every community has problems with health care and addiction," Harjo said. "Whether you are Native or non‑Native, these communities, especially in rural areas, deal with that."  He continued, "In the background, you'll have some of the more serious things. But it's just like our lives, right? We have a lot of issues and serious things, but . . . we try to laugh through it.  And I think that our Indigenous communities, that's how we've survived, is through laughter.

"There's a lot of bad s**t that happened to us at the hands of the U.S. government and other governments, but we survived, I think, partially because of our humor, and for me, that's the important part of the show."

The triumph of "Reservation Dogs" is that it subverts the long history of exclusively depressing storytelling about Natives, often written by creators and writers plagued by white guilt. It also, by no means, is intended to assure white and non-Native folks' comfort or gloss over continued oppressions and racist stereotypes with apolitical comedy. What "Reservation Dogs" does is recognize that, as the show's creators and cast spoke on at their Television Critics Association panel, comedy is an inextricable feature of Native communities.

"Laughter is medicine," Alexis said, simply. "That's the goal. I hope our people can come together and laugh, because our people need medicine. That's my goal with all of that — make people laugh."