Rand Paul calls for civil disobedience over vaccines: "They can't arrest all of us"

"We can simply say no, not again" 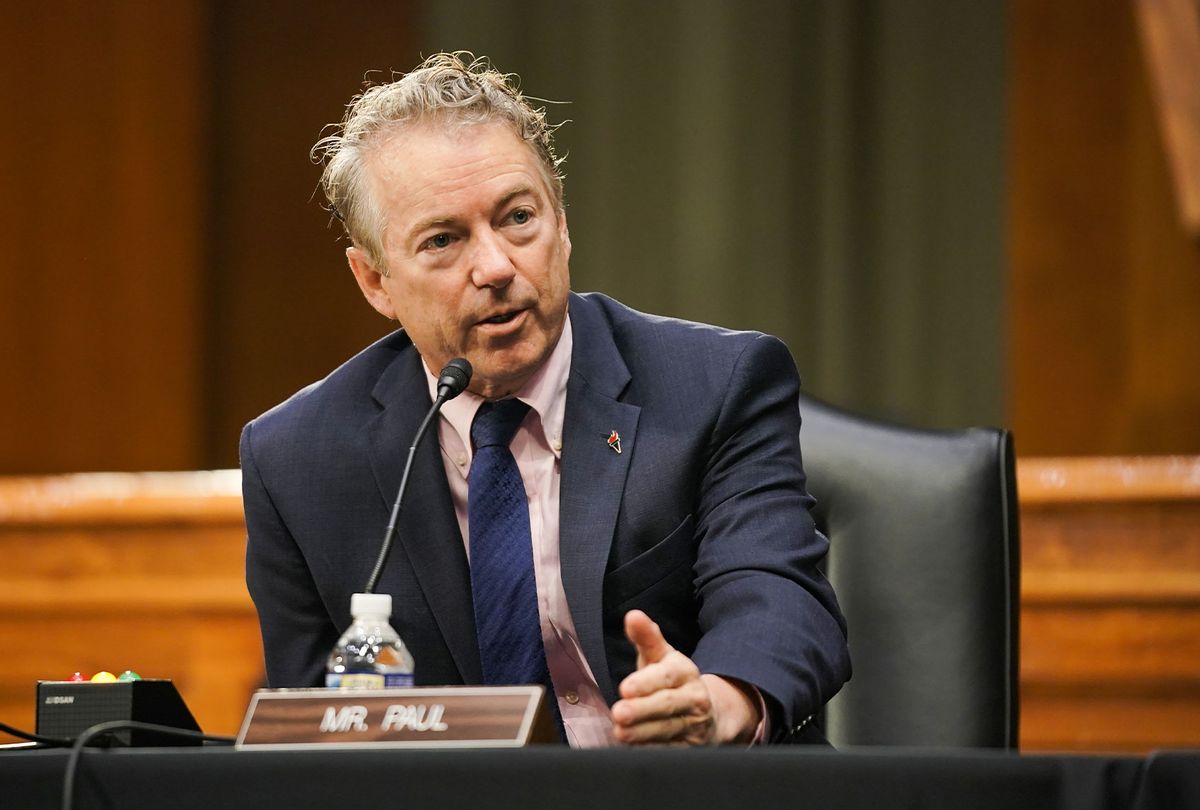 Sen. Rand Paul, R-Ky., created a stir on Sunday when he encouraged sympathetic Americans to "resist" the Centers for Disease Control's public health guidance amid a recent surge in COVID-19 cases – even in his own home state.

"No-one should follow the CDC's anti-science mask mandates," Paul pleaded in a video posted to Twitter. "They can't arrest all of us. They can't keep all of your kids home from school. They can't keep every government building closed – although I've got a long list of ones they might keep closed, or might oughta (sic) keep closed."

He continued: "We don't have to accept the mandates, lockdowns, and harmful policies of the petty tyrants and feckless bureaucrats. We can simply say no, not again."

"If a school system attempts to keep children from full-time in-person school," Paul capped off in his video. "I will hold up every bill with two amendments: One to defund them, and another to allow parents the choice of where the money goes for their child's education."

Despite Paul's claims about child immunity in his video, an increasing number of children are becoming infected with the virus. According to the American Academy of Pediatrics, around 4.3 million children have tested positive for the coronavirus since its discovery, with about 94,000 cases added just this past week.

The Kentucky lawmaker's comments drew fire from a number of critics online who objected to Paul's logic amid a resurgence of the coronavirus cases throughout the nation.

Sherrilyn Ifill, the president and director-counsel of the NAACP Legal Defense Fund, echoed Lobin, writing: "When I hear Sen. Rand Paul say he's had COVID and 'can't get it again' it's an example of the kind of misinformation from irresponsible elected officials that has poisoned the atmosphere and confused young people about the dangers to which they are exposing themselves."

"Rand Paul should at the very least be censured for this," astronomer Phil Plait added.

Democratic Senate Malcolm Kenyatta joined in: "Rand Paul and the GOP know that the answer to this pandemic is to get vaccinated. That's why they got their shot as soon as they could. For them to turn around and tell their supporters to reject live-saving shots is shameful and deadly. They know better, and they must do better."

Paul's video is just the latest in his apparent crusade against the CDC and leading epidemiologist Dr. Anthony Fauci.

In a congressional hearing last month, the conservative firebrand accused Fauci of lying to Congress by denying that the National Institute of Health funded research that may have led to an outbreak at the Wuhan Institute of Virology.

Back in March of last year, Paul himself was diagnosed with COVID-19, and immediately after used the Senate gym and went to a number of Senate lunches. Paul has repeatedly claimed he will not get the vaccine, alleging that his antibodies will protect him from reinfection and that people with a natural immunity should opt out as well.