Sourdough baps are the ultimate burger buns (yes, we said it!)

An explainer on baps, a bun you’ll want to use to house sausage, eggs, and burgers alike 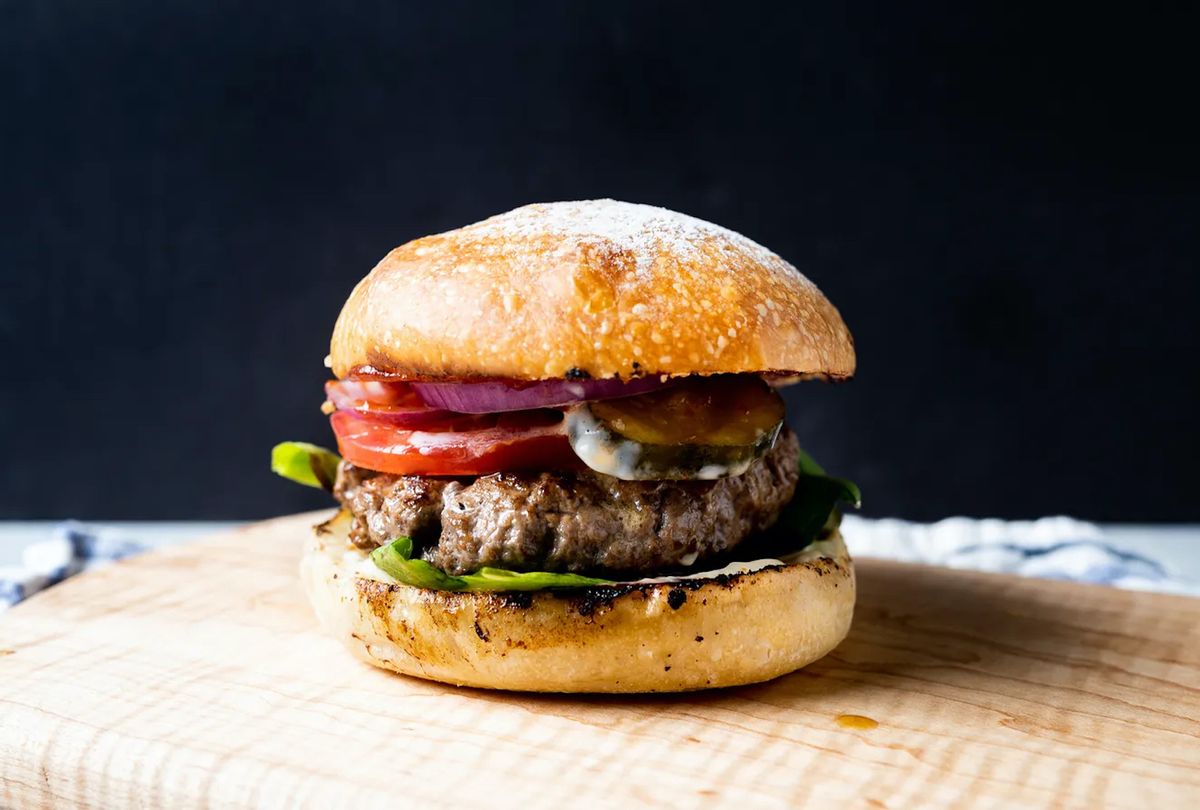 The Perfect Loaf is a column from software engineer-turned-bread expert (and Food52's Resident Bread Baker), Maurizio Leo. Maurizio is here to show us all things naturally leavened, enriched, yeast-risen, you name it — basically, every vehicle to slather on a lot of butter. Today, an explainer on baps, a bun you'll want to use to house sausage, eggs, and burgers alike.

Baps are soft, leavened rolls, typically eaten for breakfast in the United Kingdom — but I find they also serve as a pretty stellar hamburger or egg sandwich bun. The distinction between a bap and bun you'd typically use for a burger seems to primarily revolve around the fat used in the recipe, with some claiming a true bap must be made with lard.

I choose to take a different stance. Baps and American-style hamburger buns are long-lost siblings: Both are less like a roll (which is typically much softer and serve as an accompaniment to a meal) and more like a sturdy vehicle for sandwiching fillings, essentially becoming a main dish when combined. But where baps are typically lighter in color, not excessively buttery, and topped with a dusting of flour, buns are usually darker, glossy, and sometimes topped with seeds.

The terminology and distinction between buns, rolls, baps, and so many more bready things shaped like a log or sphere are blurred, and usually steeped in tradition or culture. I think that's awesome! Depending on your location, the definition of each varies and they're all different interpretations of a soft, leavened piece of dough that's baked and meant to be sliced. To me, a bun — and bap! — is something that is meant to hold another piece of food when eating, whereas a roll is usually eaten as an accompaniment.

However, regardless of whether you call your bun a bun or your bun a bap (or, dare I say, it's important they're soft, but not too soft, so that they can serve as sturdy support for sandwiches and burgers of all varieties, and most importantly, that they're delicious.

Let's look at a few different types of buns, how they compare to baps, and the characteristics of each.

To be characterized as "brioche," a recipe typically contains at least 30% — and usually 50% or more — butter to total flour weight, plus a good measure of egg. The increased butter percentage, and its property which inhibits gluten strengthening, in brioche dough is what leads to its extremely tender and "shreddy" texture. This ensures the dough never gets overly strong, even after many minutes of mixing. The more butter you work into a dough, the softer and richer it will become.

A bap, by contrast, can have butter or lard added to the dough, but it's commonly in a smaller percentage. The goal for a bap is less about that buttery richness and more about that soft-but-not-too-soft texture. The reduction in richness makes them lighter overall, less decadent, yet more utilitarian. To me, this makes the bap a much more versatile bun for breakfast, lunch, or dinner.

Another common bun style involves our starchy tuber friend, the potato. Adding cooked and mashed potato is one of my favorite ways to bring a high level of softness to a bun. Using potato flour is one approach, but my preferred method is to simply bake or microwave a potato, mash the flesh, then work that into the dough during the end of mixing.

The starches in a potato bring a luxuriously silky texture to the final bun, one that's different from adding fat such as butter or oil. Potato starch does act similarly to fat in that it inhibits gluten development, but it's also able to hang on to high levels of water. These starches then pull double duty to bring softness and moisture to the final bun.

Texturally, I also find potato buns to be much more filling than a bap. The added starch from the potato, while increasing softness, also increases the density of the bun. A potato bun with a hefty hamburger patty sandwiched between two halves typically imposes a one hamburger cap per person, and who wants to be limited like that?

At the heart of it, the difference between baps and potato buns is simply the fact that baps do not traditionally include any potato in the dough. While both are wonderfully soft and supple in their own way, once you introduce mashed potato into a dough you exit bap territory and firmly enter potato bun territory. Still, while many potato buns are topped with sesame seeds, in some recipes, you'll find the buns are dusted with flour just before baking, similar to how baps are prepared.

Since we're on the topic, let's talk about toppings and milk and egg washes.

We can't talk about buns and baps without addressing what is one of the most striking differences for me between a bun and a bap: Baps are traditionally dusted with white flour before baking. This dusting somehow enhances their soft and pillowy nature.

In addition to the flour topping, baps are usually a shade, or more, lighter than usual hamburger buns — and this is due to the wash used before baking, if there is one. In the image above you can see the results of my tests with various washes when developing a sourdough bap recipe. The two baps at the far left have no wash, the middle has only a whole milk wash, and the far-right have whole milk and whole egg wash. As expected, the gradient is evident, going from dullest at the left, to shiniest at the far right. But the goal for these baps isn't to have a glistening surface, we actually want a duller appearance. In the end, I preferred going with the middle ground: I brushed the baps with whole milk before dusting them with flour to give them a little extra color, but not too much, though you can go with whichever is most appealing to you.

In the end, I think buns, baps, rolls, flatbreads, and so many other small carb-based treats, stem from the common desire to have a piece of bread at the dinner table. The differences between them are nuanced, but that's commonly the case with baked goods, because they've arisen through time and are steeped in myriad cultures. Personally, I'm happy to have a bap or a bun at every meal — regardless of what they're called.