A tale of two bully governors: Chris Christie got away with it; Andrew Cuomo didn't 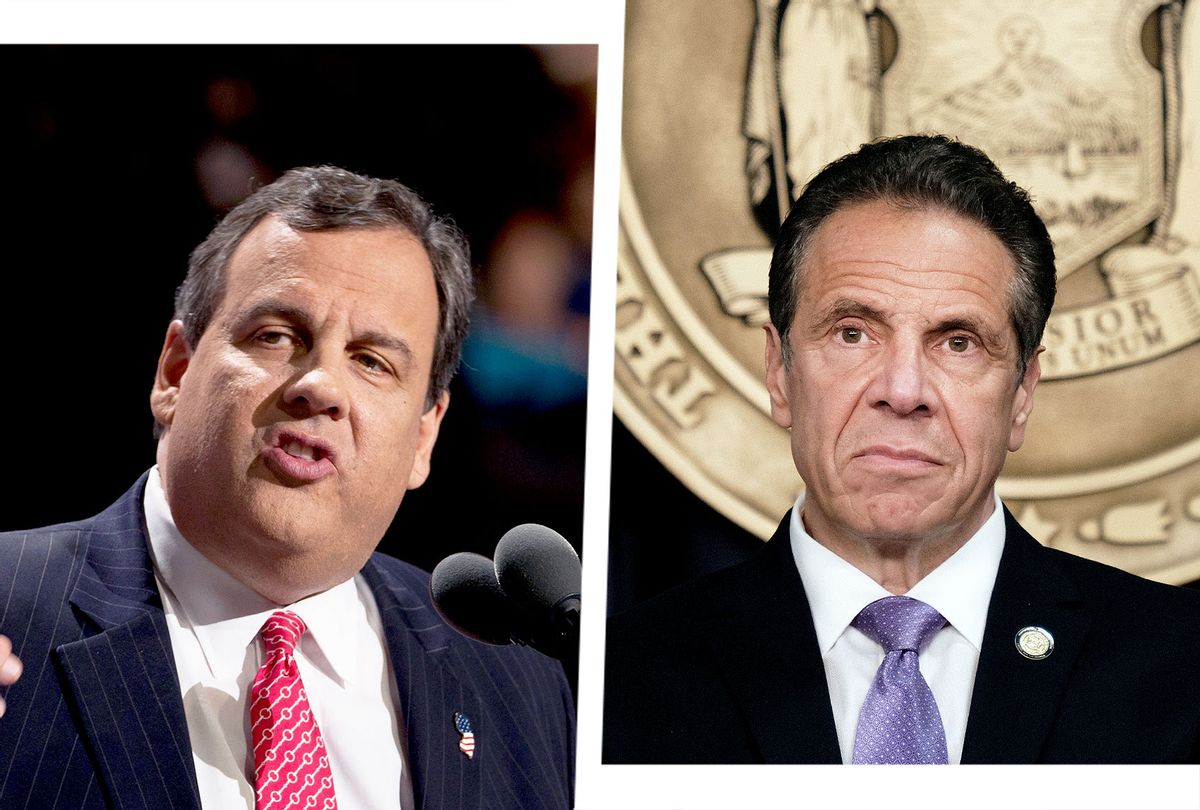 A year and a half into a once-in-a-century mass death event, we are still held captive by a deadly pandemic and a scourge of endemic political corruption that enabled Andrew Cuomo to remain in power far too long. Until the New York governor finally saw the writing on the wall and announced his resignation this week, he shamelessly attack the very same attorney general who, just months earlier, he asked to investigate allegations of sexual misconduct against him.

As the world now knows, independent investigators charged with conducting the probe on behalf of Attorney General Letitia James concluded that from 2013 through 2020 Cuomo "sexually harassed multiple women" and violated state and federal law in a spree of "inappropriate groping, kissing, and hugging" while creating "a hostile work environment rife with fear and intimidation."

In a sense, we really can't blame Cuomo for clinging as long as he could to Trump-style like tactics meant to undermine the rule of law and representative democracy.

He came of age in an era where both New Jersey and New York have had a hard time rooting out political corruption or even making convictions stick. And toughing it out over howling public outrage, as Cuomo at first clearly intended, can have its rewards in a post-shame world.

Consider former New Jersey Gov. Jim McGreevey's gambit in August 2004, when he admitted to actions that amounted to a massive breach of the public trust, yet opted to remain in office until mid-November. That robbed the electorate of the chance for a special election, handing the governorship to State Senate President Richard J. Codey, a fellow Democrat.

McGreevey also tried to make his sexual orientation the central issue, when he was really forced to resign by strong evidence of corruption. "I realize the fact of this affair and my own sexuality if kept secret leaves me, and most importantly the governor's office, vulnerable to rumors, false allegations, and threats of disclosure," he said at the time. "So, I am removing these threats by telling you directly about my sexuality."

Nowhere in the mea culpa did McGreevey apologize for appointing his lover, who had no relevant qualifications, to a $110,000-a-year job as New Jersey's Homeland Security adviser, or for trying to hand real estate developer Charles Kushner, his single biggest campaign donor, a seat on the Port Authority of New York and New Jersey, with an eye towards making him chairman.

Kushner, a prolific Democratic donor at the time, would plead guilty in 2004 to 16 federal counts including tax fraud, witness retaliation and making false statements to the Federal Election Commission. On Christmas Eve in 2020, President Donald Trump pardoned Kushner, the father of Trump's son-in-law.

For years, that kind of bipartisan stench has emanated from the Port Authority, an unaccountable sovereign duchy of self-dealing, which has on occasion been weaponized against the public that pays dearly to use the bridges and tunnels we paid to build.

During Chris Christie's tenure as New Jersey governor, he and Cuomo had a kind of compact to align themselves politically when it came to handling the bi-state agency. According to multiple reports they coordinated what was in essence feigned outrage over the Port Authority's 2011 proposal to raise tolls by 50 percent, setting the stage for them to ride to the rescue of motorists with just a $1.50 hike.

Over a period of days in September of 2013, including the 9/11 anniversary, when Port Authority police are typically on high alert for potential terrorist attacks, they instead were ordered to carry out a scheme dreamed up by Christie partisans to punish the Democratic mayor of Fort Lee, New Jersey, by closing lanes feeding into the George Washington Bridge.

This politically induced traffic coronary delayed emergency vehicle responses and paralyzed traffic on the first day of school in that Hudson River city directly across from upper Manhattan.

For months, the Wall Street Journal, along with the Record (a north Jersey daily), pressed to get to the bottom of the story. The Port Authority initially claimed the lane closures were part of a legitimate traffic study. It wasn't until January 2014, when the media published an email from Bridget Kelly to then-Port Authority official and Christie operative David Wildstein saying it was "time for some traffic problems in Fort Lee," that the cover story was fully discredited.

It was still enough of a live issue that Sen. Jay Rockefeller of West Virginia, then chair of the Commerce Committee, wrote to the Port Authority taking it to task for providing no proof of an actual traffic study. He blasted the agency for the lane shutdown, writing that it was "unconscionable that anyone would block commercial traffic and risk the safety of thousands on our interstate highway system in this way."

In response, months after the lane closures the Port Authority was still obfuscating, claiming the lane closures were "aberrational events" and that it still did "not have many of the facts as to the motivations behind actions taken at the GWB."

On the surface, the narrative that emerged was that Wildstein conspired with allies of Christie to punish the Fort Lee mayor for not endorsing Christie's re-election campaign by staging four days of lane closures on the heavily-trafficked George Washington Bridge, from Sept. 9 to 13, 2013.

In our region, we have historically relied on U.S. attorneys to bring corruption cases, since the New Jersey attorney general (appointed by the governor) and Manhattan district attorney (elected by the voters) are often reluctant to do so.

Fishman got convictions against Kelly and Baroni, yet they were ultimately overturned. Christie was never charged, although the prosecution's position during the trial was that he was aware of the plot as it was unfolding.

As was widely reported at the time, and reaffirmed in testimony during the criminal trial, Port Authority police were actively involved in executing the scheme. Senior officers were aware of the plan to alter traffic before it happened, and when rank-and-file officers raised concerns about the problems it was causing at the time, they were told to keep it to themselves. In September 2014, the Record reported that when Port Authority police officers used their radios to report that the lane closures were creating "hazardous conditions" on local Fort Lee roads, their supervisors told them to "shut up."

In the midst of the lane closures, which crippled his city and ruined the first day of school for Fort Lee's school children, Mayor Mark Sokolich — the apparent target of the whole enterprise — appealed via email for Baroni's help.

"Adding insult to injury, many members of the public have indicated to me that the Port Authority [police] officers are advising commuters in response to their complaints that this recent traffic debacle is the result of a decision that I, as the Mayor made," Sokolich wrote to Baroni.

It's important to put this in context: Christie was in a heated re-election campaign against state Sen. Barbara Buono, and the lane closures were a hot issue. Had the Port Authority come clean, it could have been a very different race.

At the time, Cuomo insisted he knew nothing about Bridgegate beyond what he read in the newspaper. But WNYC reported later that based on emails it received through a freedom-of-information request, "Cuomo and his top aides" were "responding instantly and far more intensely to the abrupt lane closures on the George Washington Bridge than had previously been known," which helped "keep a lid on the scandal."

In 2013, the Wall Street Journal reported that Christie had called Cuomo to complain that Port Authority executive director Patrick Foye "was pressing too hard to get to the bottom of why the number of toll lanes onto the bridge from Fort Lee, NJ, was cut from three to one." The Journal attributed its story to "a person familiar with the matter."

At the criminal trial, three people testified that Cuomo was part of the effort to cover up the real origins of the Fort Lee lane closures after a conversation with Christie where the latter asked his New York counterpart to have Foye, a Cuomo appointee, "stand down."

As NJ.com reported, although Foye ordered the lanes reopened and "suspected foul play was involved," he still issued a press release claiming the Port Authority was conducting "a week of study" and would "review those results and determine the best traffic patterns at the GWB."

Under oath at the criminal trial, Foye admitted that he he knew the statements in the press release were false and that the agency used the excuse of an internal probe to stave off reporters' questions for a month after that investigation was over.

That was invaluable cover for the Christie crew. Artfully controlling the narrative to blunt the reporting on the Bridgegate scandal certainly didn't hurt Foye's career. In 2017, Cuomo tapped him to be CEO and chairman of the board of the Metropolitan Transportation Authority, the agency that oversees New York City's subway system and the Metro-North and Long Island Rail Road commuter lines.

Members of the Port Authority Police Department even surfaced in what prosecutors alleged was a criminal conspiracy to cover up the initial lane-closure plot. In November 2013, Baroni testified before the New Jersey state legislature that the concept of the traffic study was first raised by Paul Nunziato, president of the Port Authority Police Benevolent Association.

In 2014 The New York Times reported that Nunziato and Wildstein had met regularly from 2012, leading up to Nunziato's endorsement of Christie's re-election campaign, on behalf of his 1,500-member union. (Under Christie's tutelage the ranks of the Port Authority police grew from 1,500 to 2,000 by March 2014.)

When Nunziato took questions from reporters after a December 2014 Port Authority commissioners' meeting, he reaffirmed that he had originated the George Washington Bridge-Fort Lee traffic study. A month earlier, he had said in a statement that speculation that politics was behind the GWB fiasco lane closures was like speculating on the location of Jimmy Hoffa's body.

Nunziato's lawyer, Charles J. Sciarra, told the New York Times his client had nothing to do with the closures. "My client was trying to be supportive of people who were supportive of his union; he never intended to mislead."

In May 2015, Wildstein pled guilty to two federal felony counts. His convictions were vacated by a federal judge last year, after the U.S. Supreme Court reversed the convictions of Kelly and Baroni.

So Fishman's extended effort to prosecute the Bridgegate schemers was an expensive flop. One thing he did succeed in doing was keeping sealed the list of unindicted co-conspirators, which has remained off limits to the media and the public to this very day.

This is not a Hollywood movie — all too often, the bad guys get away. Sometimes they don't: Cuomo hired Fishman as outside counsel to defend him against the harassment allegations. This time, that wasn't enough. But it's no wonder Cuomo believed he could mold the collective reality by "hanging tough." Power protects power.