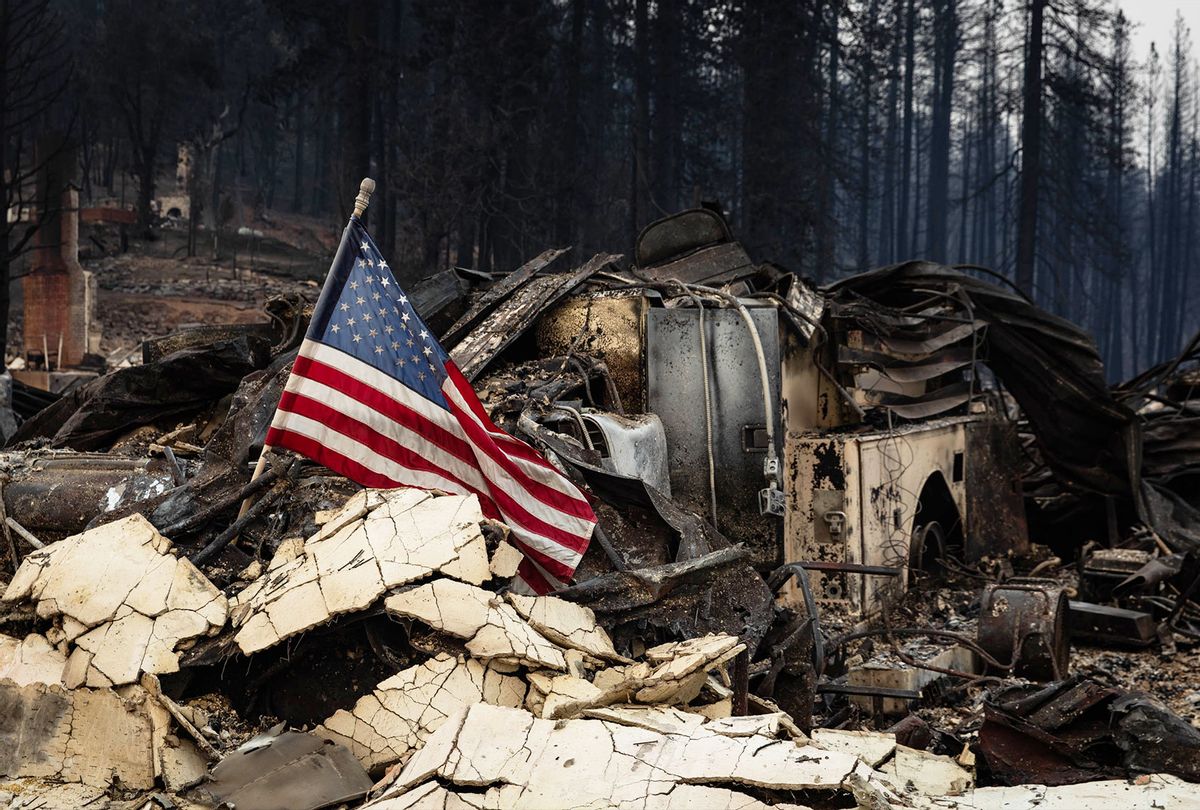 An American flag is placed amidst the rubble on August 8, 2021 in Greenville, California. The Dixie Fire, which has incinerated more than 463,000 acres, is the second largest recorded wildfire in state history and remains only 21 percent contained. (Maranie R. Staab/Getty Images)
--

Northern California's Dixie Fire continued to make history this weekend, jumping past Oregon's Bootleg Fire to become the biggest active blaze in the United States. As of Monday afternoon, it is California's second-largest wildfire in recorded history, having ripped through nearly half a million acres since it sparked last month.

But it's not just the Dixie Fire's size that's notable; it's also incredibly fast-moving. Since its inception, the Dixie Fire has devoured California's parched forests at a mind-boggling rate — on some days tearing through an acre of land every second. As a result, authorities have had to work swiftly to try to disseminate up-to-date information to local residents whose homes may be endangered by the flames.

"We're seeing truly frightening fire behavior," said Plumas National Forest supervisor Chris Carlton in a public briefing on August 5, shortly after the historic town of Greenville, California, was razed by the Dixie Fire. "We have a lot of veteran firefighters who have served for 20, 30 years and have never seen behavior like this, especially day after day."

While that behavior is new, it's not entirely unexpected. The Dixie Fire is just the latest in a series of wildfires that are much more extreme than the blazes of the previous century. A century-long history of bad forest management is partly to blame, but so is climate change: Severe drought and rising temperatures have sucked moisture out of California's forests, creating tinderbox conditions that are ripe for massive and quick-moving conflagrations. Once wildfires get going, they can even create their own positive feedback cycles: On July 20, the Dixie Fire generated a "pyro cumulonimbus" cloud system that sparked lightning and drove strong winds, helping to accelerate the fire's spread.

Even though California has been bracing itself for a potentially devastating fire season by spending hundreds of millions of dollars on prevention measures, some experts say the state hasn't invested enough in systems that alert residents of evolving risks given wildfires' new, faster pace.

"These fires are outpacing the traditional communication structures," said Daniel Swain, a climate scientist at the University of California Los Angeles. Televised public briefings, for example, usually only occur every few hours, if not even less frequently. And opt-in alert systems — like CodeRed or a "reverse 911" system, in which authorities call households' landlines or cell phones to warn them of an approaching wildfire — may have low coverage, leaving large swaths of an at-risk population with incomplete information.

"I've spoken to people who are panicked and don't know whether they need to leave, or which direction to leave," Swain said.

In the wake of such rapidly-moving wildfires, many people have turned to social media for the most up-to-date fire news — especially Twitter, where nearby residents, hobbyists, and other amateur wildfire trackers have posted updates using the hashtag #DixieFire. Andrew Burke, whose home in Butte Creek Canyon, California, was burned in the 2018 Camp Fire, has kept tabs on this year's flames by aggregating information from a number of sources — everything from online wind maps to specific Twitter accounts.

"You have to be an armchair expert," he said, otherwise, information from the authorities might not come until it's too late. He said he and other residents of fire-prone areas have come to treat an evacuation warning as an order. "And if you actually get an order, that's like where your hair is getting singed," he added.

Although wildfire information crowdsourced from social media may help fill an information vacuum for now, Swain says it is no substitute for a centralized emergency notification system that is updated for the fires of the 21st century — something that utilizes all possible modes of communication and makes available information that is currently inaccessible to the general public, such as real-time firefighter communications. He also recommends that firefighting units operationalize the Twitter model, hiring their own public information officers for the sole purpose of disseminating information as quickly as they can across multiple channels.

Beyond preventing infernos in the first place, an improved communication infrastructure may be one of the most efficient ways to save people's lives and property. "It's something that could be addressed really fast," Swain said, "if there were motivation and funding to do it."