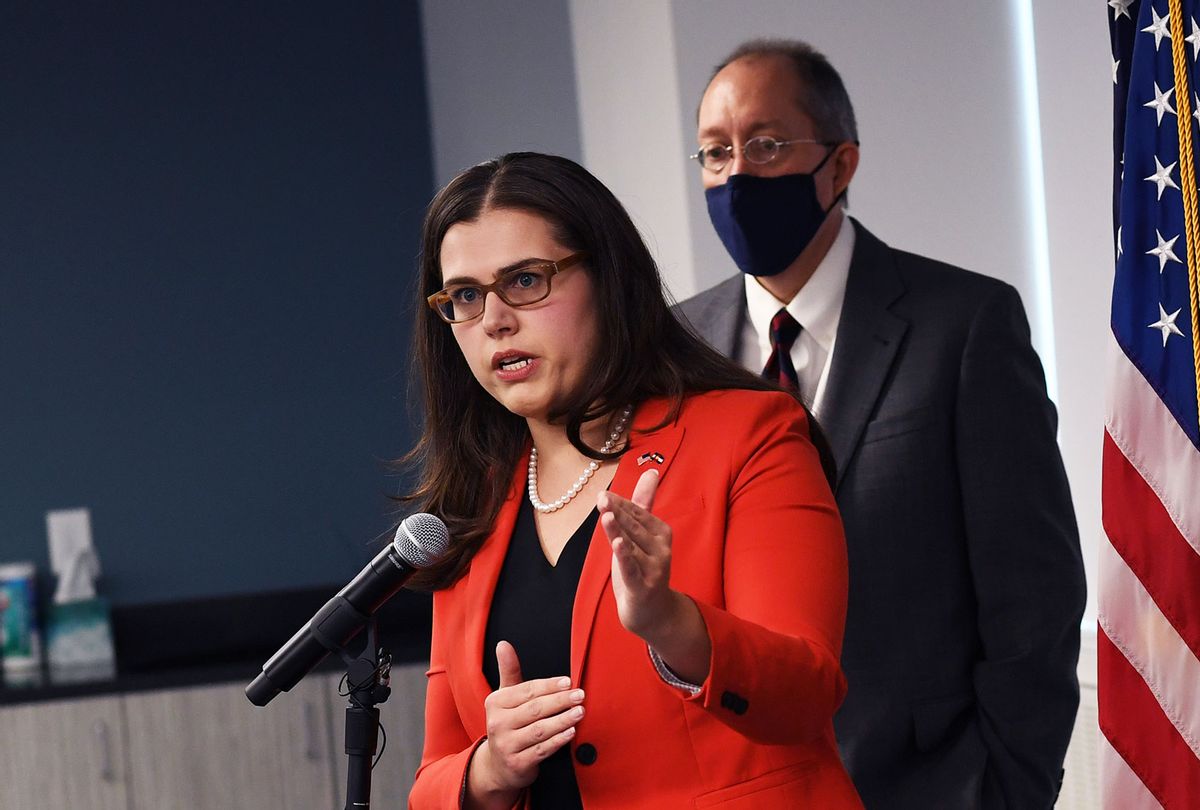 Colorado Secretary of State Jena Griswold banned Mesa County from using its election equipment on Thursday after accusing a Republican county clerk of helping to leak voting system passwords to a far-right blog.

A video showing passwords used to access the county's voting system that was secretly recorded during a security update in May was published last week on the "extreme conspiracy theorist" blog The Gateway Pundit, Griswold, a Democrat, said at a news conference on Thursday. Mesa County Clerk Tina Peters, who has spent most of the week at MyPillow founder Mike Lindell's conspiracy theory-laced "Cyber Symposium" in South Dakota, "allowed" the security breach and "by all evidence at this point, assisted it," said Griswold.

Peters, whose office now faces a criminal investigation by the county's district attorney, falsely passed off an unauthorized person as a county employee during a security update of the country's Dominion voting equipment, which has been the focus on many baseless Trumpworld conspiracy theories, the secretary of state told reporters.

"He is not an employee — you have to be an employee to attend these," she said. "You also have to be background checked and the County Clerk's office specifically misled my office saying that he did comply with the rules."

Peters also ordered her staff to shut off the video surveillance system that monitored the voting machines one week before the breach, Griswold said.

"I think it is extremely concerning that an elected official from the state of Colorado is actively working to undermine confidence and spread misinformation about our award-winning voting system," she said, announcing that the county will no longer use more than 40 pieces of voting equipment involved in the breach in its upcoming elections. But Griswold stressed that the passwords could only be used on physical equipment and it was unlikely that someone with the passwords could have meddled with the machines.

Peters, who survived a recall effort last year after an absentee ballot screw-ups and alleged personal "malfeasance," argued during her keynote speech at Lindell's event that the investigation from Griswold's office was politically motivated and insisted that she was only looking to find potential problems on behalf of voters in the county.

"She has come into my office several times already in the last two years since I've been the elected official, because I am a Republican, I'm a conservative and she's not. And she weaponizes her position to attack people that disagree with her," she claimed, arguing that her constituents raised concerns that "something didn't seem right in our county from years ago to the 2020 election."

But Matt Crane, the executive director of the Colorado County Clerks Association, harshly criticized Peters while appearing alongside Griswold.

"It was a solo, intentional and selfish act that jeopardized the conduct of and the elections and Mesa County and affects the competence of voters throughout the state," he told reporters. "We've heard people say that this is heroic. To be clear. There is nothing heroic or honorable about what happened in Mesa County."

Griswold said that Peters has not yet responded to her order to turn over the county's election equipment to the secretary of state's office.

Griswold has repeatedly pushed back on Republican efforts in the state to act on former President Donald Trump's election lies. She led a multi-state lawsuit against the USPS and Postmaster General Louis DeJoy last year for sending erroneous voting information to Colorado voters. Last month, she issued new rules barring third-party vendors from performing "sham audits" of the election, like the dubious so-called "audit" in Arizona's Maricopa County.

The Arizona Cyber Ninjas-led fiasco has come under fire even from the state's Republican supporters as it stretches into its fourth months amid expectations that its upcoming report will sow more election disinformation. Arizona Secretary of State Katie Hobbs, a Democrat who is now running for governor, warned the county that she will decertify election equipment turned over to Cyber Ninjas in the audit over security concerns. The Republican-led Maricopa County Board of Supervisors agreed to decertify the equipment, telling Hobbs that the panel "shares your concerns."

Taxpayers will now have to pony up $2.8 million to replace hundreds of machines.

House Democrats have since launched a federal probe into the shady "audit" to "determine whether the privately funded audit conducted by your company in Arizona protects the right to vote or is instead an effort to promote baseless conspiracy theories, undermine confidence in America's elections, and reverse the result of a free and fair election for partisan gain," Oversight Committee Chairwoman Carolyn Maloney, D-N.Y., and Civil Rights Subcommittee Chief Jamie Raskin, D-Md., said in a letter to Cyber Ninjas.

The Justice Department last month issued new guidance warning states against "audits" similar to the one in Arizona, where officials sought to contact voters directly to determine how they voted.

"This sort of activity raises concerns regarding potential intimidation of voters," the DOJ said, vowing to "act" if the audits are conducted with the  "purpose nor the effect of dissuading qualified citizens from participating in the electoral process."