Beyond "touchy-feely": Andrew Cuomo, Donald Trump and the politics of sexual abuse

Their sordid histories are somewhat similar — but only Republicans are sticking with their man, no matter what 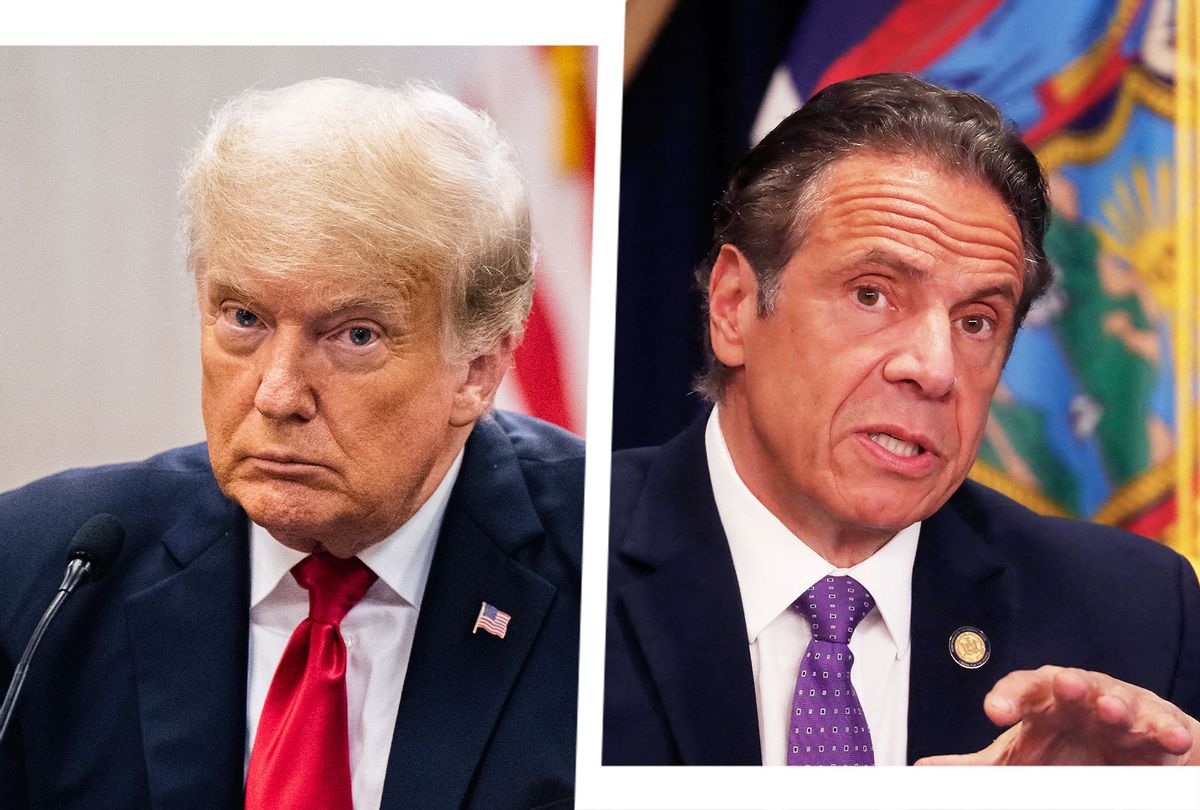 Andrew Cuomo is out as governor of New York. Reeling from allegations in a 165-page report by New York Attorney General Leticia James that he sexually harassed 11 women and assaulted at least one, most of whom worked under him in state government, and facing impeachment proceedings, Cuomo announced last Monday that he will resign on Aug. 24.

Cuomo faces charges that he groped and engaged in unwanted touching of several women, made inappropriate and suggestive comments and created a hostile work environment for women who worked for him. One of the women, Brittany Commisso, his former executive assistant, filed a criminal complaint accusing Cuomo of groping and rubbing her butt and slipping his hand inside her blouse and bra and grabbing her breast. The charge filed by Commisso is the most serious allegation against Cuomo. Four district attorneys from jurisdictions in Manhattan, Albany, Westchester, and Nassau counties have announced that they are reviewing the evidence presented in the attorney general's report.

Andrew Cuomo is a Democrat. Both houses of the New York state legislature are controlled by Democrats. Had Cuomo not announced he would resign, he would clearly have been impeached and convicted and removed from office by the state legislature.

Cuomo's rapid fall after allegations of sexual harassment and assault is reminiscent of Al Franken's resignation from the U.S. Senate. Franken faced allegations that he had forcibly kissed and groped several women. He was never accused of sexual assault, but less than a month after the first sexual harassment allegation was made against him in November of 2017, Franken announced he would resign from the Senate.

It has been said that Democrats eat their own, but it's more accurate to say that Democratic men, when they are caught being disgusting, at least have the sense to apologize and resign their positions. Democrat Eliot Spitzer was forced to resign as New York governor in 2008 following allegations that he had been a frequent customer of a high-priced prostitution ring. Attorney General Eric Schneiderman, another incredibly disgusting New York political figure, resigned from office in 2018 after the New Yorker reported that four women had accused him of physical abuse during sex. The women said that Schneiderman had choked, hit or slapped them without their consent.

Republicans, on the other hand, are not known for having a problem with men in their party when they are charged with sexual harassment and assault. Take the man who has been the leader of the Republican Party since he won the presidency in 2016: Donald Trump. In addition to various affairs Trump has had during three of his marriages, and the payoffs he has made to keep the women quiet, Trump has faced many accusations of harassment and abuse over several decades.

Let's take a look at what the Republican Party believes does not amount to behavior that would disqualify you from holding office. This list of Trump's alleged incidents of sexual misconduct is compiled from reports on ABC News and Time Magazine.

In a divorce filing, Trump's then-wife, Ivana, charged him with forcibly raping her in 1989. She is the mother of Eric, Donald Jr. and Ivanka. Later, under pressure to settle her divorce case, she withdrew her allegation, explaining that while she did feel "violated," she did not mean rape "in a literal or criminal sense."

Former model and photographer Kristin Anderson says that Trump shoved his hand under her dress and forcibly grabbed her vagina without her consent in a nightclub in the early 1990s. Anderson, who was in her early 20's at the time, said Trump was a stranger, a guy sitting next to her in a nightclub.

Jill Harth, a makeup artist, says that Trump groped her under her skirt at a dinner for contestants in one of his beauty pageants in 1992. She told the Guardian Trump had "pushed me up against the wall, and had his hands all over me and tried to get up my dress" in one of his children's rooms at Mar-a-Lago in the early 1990s.

Temple Taggart McDowell, a former Miss USA contestant, says that Trump forcibly kissed her on the lips more than once at the pageant in 1997.

Amy Dorris, a former model, told the Guardian that Trump groped her and forcibly shoved his tongue down her throat in 1997 at the U.S. Open tennis tournament. "I was pushing him off. And then that's when his grip became tighter and his hands were very gropey and all over my butt, my breasts, my back, everything," she said. "I felt trapped."

Lisa Boyne told HuffPost in 2016 that at a dinner she attended in 1996, women were forced her to walk across the table in order to leave the room. She says Trump commented on her underwear and vagina as she passed him.

Advice columnist E. Jean Carroll says that Trump pushed her up against the wall of a department store dressing room in the mid 1990s and forced his penis inside her. She has filed a lawsuit against Trump accusing him of rape.

Mariah Billado, who was Miss Vermont at the Miss Teen USA pageant in 1997, says Trump walked into her dressing room without her consent while she and other contestants were partially undressed. Trump admitted walking into dressing rooms and looking at undressed contestants on the Howard Stern Show in 2005, telling Stern he got away with it because "I'm the owner of the pageant."

Jessica Leeds says that Trump shoved his hand beneath her skirt and groped her "everywhere" while sitting next to him on a flight in the late 1970s. When she ran into him at a party in New York City several years later, Trump recognized her and called her a "cunt." She told the New York Times in 2016, "It was shocking. It was like a bucket of cold water being thrown over me."

Cathy Heller told The Guardian she was celebrating a Mother's Day brunch at Mar-a-Lago in the late 1990s with her husband, children, and mother in law when Trump walked up to her table and forcibly kissed her and grabbed her. She said Trump got angry when she tried to avoid his kiss and said, "Oh, come on!"

Karena Virginia told a press conference in 2016 that Trump walked up to her in the parking lot of the U.S. Open in 1998 and groped her breast against her will and asked her, "Don't you know who I am?"

Karen Johnson, a member of the Mar-a-Lago club, says that Trump pulled her behind a set of drapes and forcibly grabbed her vagina and kissed her on the lips in the early 2000's. "I didn't have a say in the matter," she says. Trump continued to pursue her by calling her repeatedly and offering to fly her to New York.

Miss Teen USA contestant Bridget Sullivan says that Trump walked into the dressing room at the pageant while she was undressed and hugged her "a little low on [her] back" against her will. He was like "a creepy uncle," Sullivan says.

Tasha Dixon, another Miss Teen USA contestant, made a similar claim against Trump, saying that he entered her dressing room at the pageant when she and the other girls were "half naked changing in our bikinis. There was no second to put a robe on or any sort of clothing or anything." Dixon was 18 years old when Trump ogled her in 2001.

Natasha Stoynoff, a reporter for People Magazine, says that Trump sexually assaulted her at his Mar-a-Lago club in 2005 while Melania – whom he had just married – was in another room changing for a photo shoot. Trump said he would take her to Peter Luger's steakhouse and told her, "You know we're going to have an affair, don't you?"

Summer Zervos, a former contestant on "The Apprentice," told a news conference in 2016 that during a private meeting in his room at the Beverly Hills Hotel in 2007, Trump "grabbed my shoulder and began kissing me again and placed his hand on my breast."

Rachel Crooks, a former receptionist for the Bayrock Group, one of Trump's companies at Trump Tower, says that Trump forcibly kissed her without her consent outside an elevator in 2005. "It was so inappropriate," Crooks told the New York Times in 2016.

Mindy McGillivray says that Trump forcibly grabbed her buttocks without her consent in 2003 in a backstage area of a Ray Charles concert at Mar-a-Lago.

Samantha Holvey, a Miss USA contestant in 2006, told CNN in 2016 that Trump "inspected" her and other contestants "like we were just meat, we were just sexual objects," before the pageant.  It made her feel "the dirtiest I felt in my entire life," she says.

Former Miss Finland Ninni Laaksonen told a Finnish newspaper that Trump groped her without her consent and "grabbed my butt" backstage at the David Letterman show in 2006 when she made an appearance with other Miss Universe contestants. Trump was the owner of the Miss Universe pageant at the time.

Cassandra Searles, a former Miss USA contestant, says that Trump "continually grabbed my ass and invited me to his hotel room" at the pageant in 2013. She says Trump treated her and the other contestants "like cattle." Trump was the owner of the Miss USA pageant.

Sexual assault by forcibly grabbing and touching breasts and vaginas. Forcible kissing. Shoving women against walls and holding them against their will. Pulling a woman behind a set of drapes and assaulting her. Making disgusting and demeaning comments about genitalia and other body parts. Leering at naked teenagers backstage at a pageant.

And violent forcible rape, more than once.

Donald Trump isn't alone among Republican sexual abusers. Right now, Rep. Matt Gaetz of Florida is under investigation by multiple law enforcement agencies for sex trafficking a minor, procuring sex and having sex with a minor.

Andrew Cuomo is out as governor of New York. Donald Trump just reported raising $100 million, likely in preparation to run for president again in 2024. His support among members of the Republican Party is currently above 80 percent. Republicans evidently believe sexual harassment and assault of women is a sign of strength and manhood, and a reason to vote for a disgusting slimeball like Donald Trump.

There's a difference between Democrats and Republicans. Don't forget it.