After 20 years of lies and war, U.S. retreat underway as Taliban retake control of Afghanistan

"Who is going to be fired for 20 years of horrific failure in Afghanistan? Who would you suggest?" 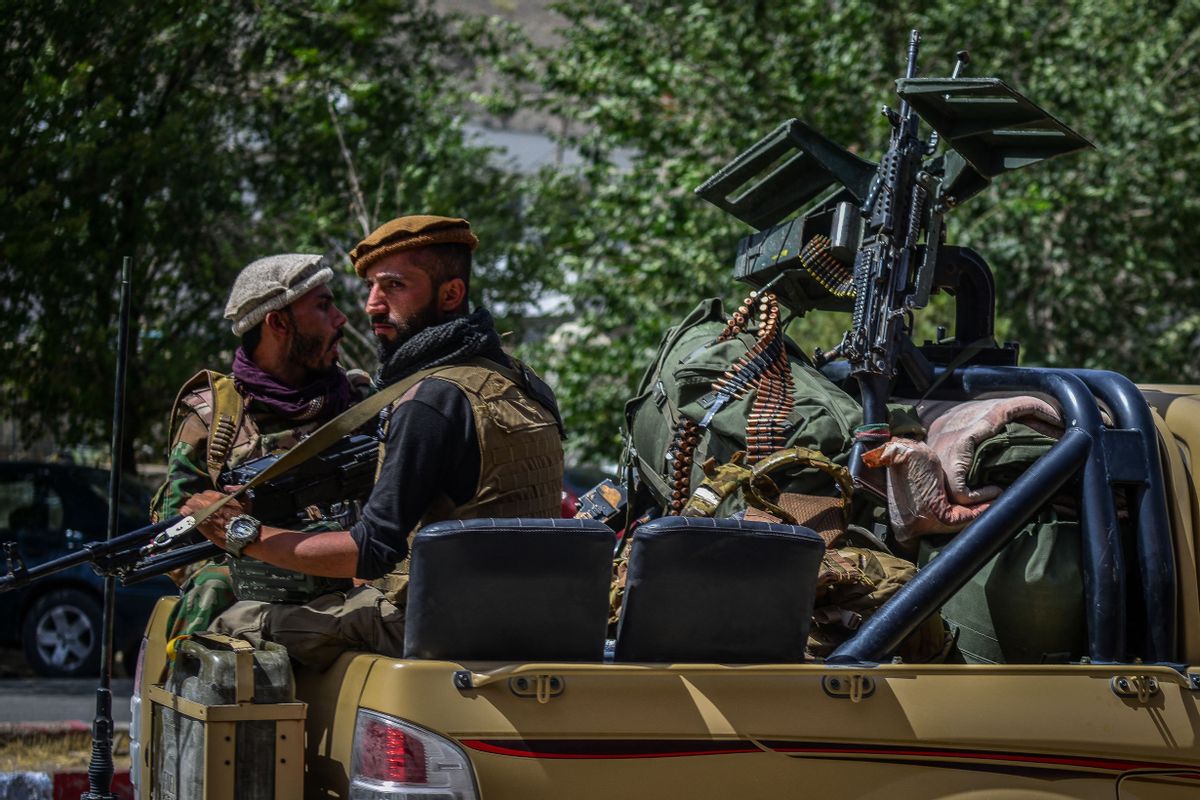 Soldiers from Afghan Security forces travel on a armed vehicle along a road in Panjshir province of Afghanistan on August 15, 2021. (AHMAD SAHEL ARMAN/AFP via Getty Images)
--

With reports that Bagram Air Base and nearby Parwan Prison had both fallen out of Afghan government hands, Taliban spokeperson Suhail Shaheen told the BBC that his group expects a peaceful transfer of power within days and assured the people of Afghanistan, including those in Kabul, that retribution and revenge would not follow.

"We assure the people in Afghanistan, particularly in the city of Kabul, that their properties, their lives are safe. There will be no revenge on anyone," Shaheen said.

Asked to explain what a "peaceful transfer of power" means in practice, he said: "It means that the city and the power should be handed over to the Islamic Emirate of Afghanistan and then, in future, we will have an Afghan inclusion Islamic government in which all Afghans will have participation."

A press statement issued from the Taliban echoed that message, urging Afghans not to flee their own country and vowing that both their lives and property would not be threatened.

Subsequently—amid reports that President Ghani had already left the country—Interior Minister Abdul Sattar Mirzakwal announced a "peaceful transfer of power" had been agreed to and that a transitional government was being formed.

"The Afghan people should not worry," Mirzakwal said in a recorded speech, according to Agence France-Presse.

"The safety of [Kabul] is guaranteed," he said."There will be no attack on the city, and the agreement is such that the transition of power will take place in a peaceful manner."

In recent days, anti-war voices who opposed the initial invasion in 2001 and have railed against the U.S. occupation ever since have pointed out the inevitability of what is now unfolding, the rapid return of Taliban rule despite twenty years—during which trillions of dollars were spent and hundreds of thousands of innocent lives were lost—of U.S. military leaders claiming that some kind of victory was possible.

"The tragic events unfolding in Afghanistan are yet further proof of the utter failure of our country's endless wars and the mindset that enables them," said Stephen Miles, executive director of the U.S.-based group Win Without War, on Friday. "Nearly two decades of military intervention and occupation did not build lasting peace. No number of bombs dropped, no length of time occupied, would have."

On Sunday, veteran peace activist Medea Benjamin was among those wondering who—any one in the U.S. military or foreign policy establishment—would ever be held accountable for the deceit or failures in Afghanistan.

"Who is going to be fired for 20 years of horrific failure in Afghanistan?" Benjamin asked on social media. "Who would you suggest?"

In a separate Sunday morning tweet, Benjamin said: "As the blame game for the Afghan crisis heats up, I want to add all who supported this disastrous invasion from the beginning, including those who bashed us at anti-war protests. We were right, you were wrong. We should have never invaded Afghanistan. Period."

"The whole war on terror has proved a terrible failure and this should be admitted," said Lindsey German, convenor of U.K.-based Stop the War coalition, in a statement on Sunday.

"We should also consider how the lives of Afghanis would have been improved if only a fraction of the money committed to this war... had gone into improving their lives through investment in infrastructure, housing, education, agriculture," German added. "That was an opportunity that could have been taken but was ignored in favour of military solutions. And those have brought us to where we are today."

With a massive U.S. evacuation operation underway, the United Nations warned Saturday of the potential for a massive refugee crisis as many Afghans—not assured they will be safe or unwilling to live under Taliban rule—try to leave the country. On Friday, the UN Refugee Agency (UNHCR) called on neighboring countries "to keep their borders open in light of the intensifying crisis" and warned that "inability to seek safety may risk innumerable civilian lives." The UNHCR said it was standing ready to help counties scale up their humanitarian and assistance efforts as needed.

In a statement issued by the White House on Saturday, President Joe Biden said the while he had mobilized approximately 5,000 U.S. soldiers to provide security and assist with the evacuation of Afghanistan he was not considering changing course to maintain the occupation of the country which has been ongoing since 2001.

"I was the fourth President to preside over an American troop presence in Afghanistan—two Republicans, two Democrats," Biden said. "I would not, and will not, pass this war onto a fifth."