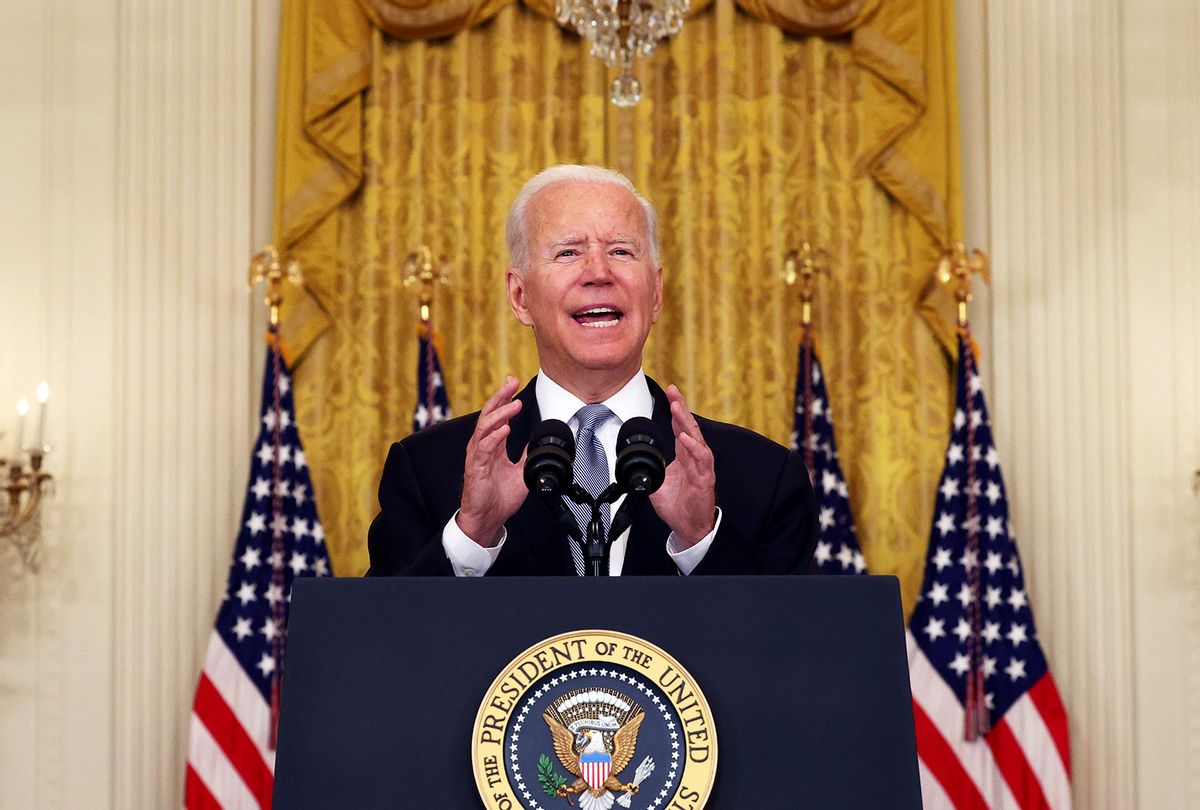 U.S. President Joe Biden gestures as he gives remarks on the worsening crisis in Afghanistan from the East Room of the White House August 16, 2021 in Washington, DC. Biden cut his vacation in Camp David short to address the nation as the Taliban have seized control in Afghanistan two weeks before the U.S. is set to complete its troop withdrawal after a costly two-decade war. (Anna Moneymaker/Getty Images)
--

President Biden refused to take questions after a Monday speech addressing the Taliban's swift takeover of Afghanistan, even after admitting that the coup unfolded "more quickly" than his administration had anticipated.

Facing sharp criticism from the right, the president stood by his decision to remove U.S. troops from Afghanistan. "I am deeply saddened by the facts we now face, but I do not regret my decision," he stated. "The truth is this did unfold more quickly than we anticipated."

Biden further claimed that U.S. interests in Afghanistan had never been aimed at "nation-building" or "creating a unified centralized democracy," but rather "preventing a terrorist attack on American home land."

The president also redirected blame from his own administration to that of Afghanistan, claiming that the U.S. had adequately prepared Afghanistan to arm themselves against a Taliban-led attack.

"We talked about how Afghanistan should prepare to fight their civil wars after the US military departed, to clean up the corruption in government, so the government could function for the Afghan people," he said. "We talked extensively about the need for Afghan leaders to unite politically. They failed to do any of that. I also urged them to engage in diplomacy, to seek a political settlement with the Taliban. This advice was flatly refused."

Biden additionally put emphasis on both the fiscal and human cost of the conflict. In fact, the War in Afghanistan, which dragged on for nearly two decades with no end in sight, marks the longest war that the U.S. had ever engaged in.

According to an AP report, the war saw the deaths of 2,448 American servicemembers, 66,000 Afghan national military and police, 7,245 Afghan civilians, and 51,191 Taliban and other opposition fighters. Experts estimate that the U.S. additionally spent over $2 trillion on on war-related expenditures.

"How many more lives, American lives, is it worth?" the president asked during his speech. "How many endless rows of headstones Arlington National Cemetery? I'm clear on my answer."

The president said that his administration would "continue to speak out for the basic rights of Afghan people, of women and girls, as we speak out all over the world."

"I've been clear—human rights must be the center of our foreign policy, not the periphery," he added. "But the way to do it is not through endless military deployments—it is through diplomacy, economic tools, and rallying the world to join us."

As Biden jaunts back to Camp David, the situation in Kabul remains in flux, with thousands of Afghan citizens having flocked to Kabul's international airport in a bid to flee the country. At least seven people have died in the chaos. Pentagon spokesman John Kirby said that some 2,500 troops have been stationed at the airport and another 500 are set to arrive this Tuesday.