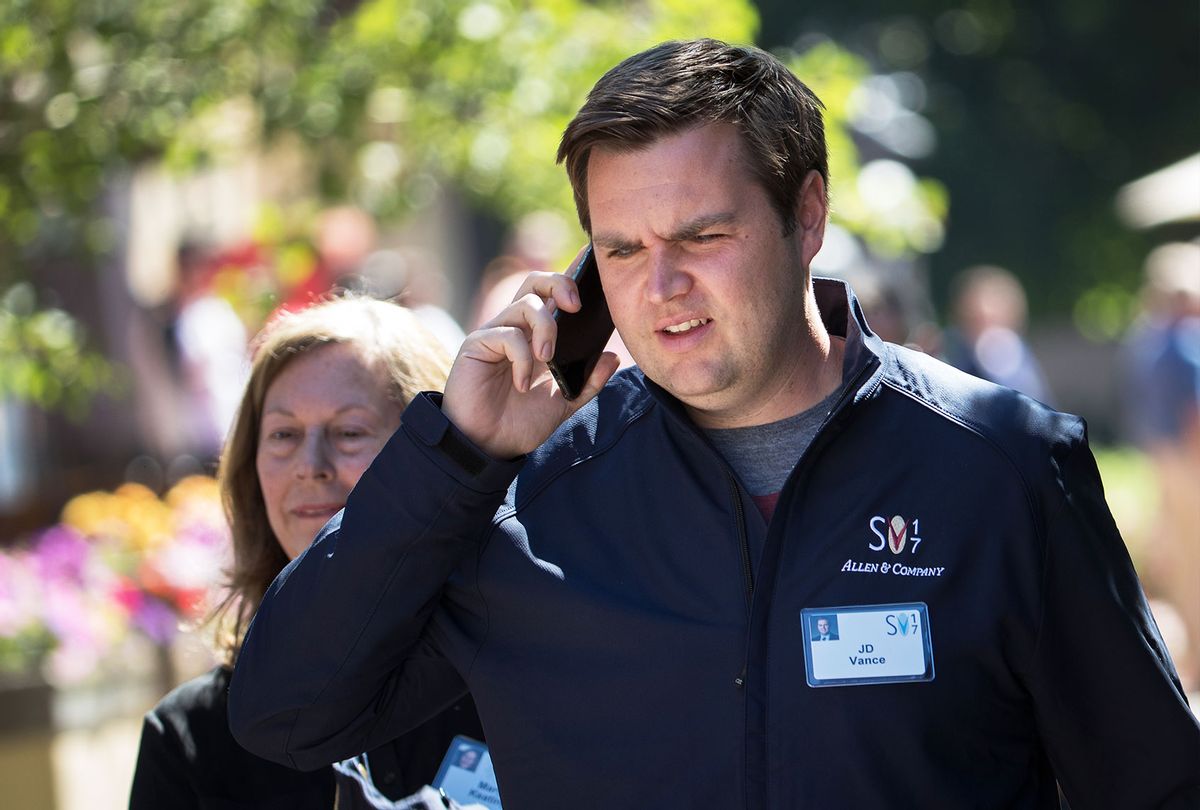 In the end, 19 Senate Republicans defied Trump's threats of primary challenges and backed President Biden's infrastructure bill — something Trump vainly promised to pass throughout his term in office — most GOP members  voted against the $1.2 trillion plan that will fund investments in roads, bridges, waterways, broadband internet and other physical infrastructure projects for the next decade.

"Our plan will create good-paying jobs in communities across our country without raising taxes," Republican negotiators like Sens. Rob Portman, R-Ohio, and Richard Burr, R-N.C., said in a joint statement with their Democratic counterparts, touting the critical projects that the bill will fund.

Portman was able to secure nearly $10 billion to improve his state's highways and bridges and billions more for other projects, and Burr's state will receive more than $8 billion for infrastructure improvements. But both those senators are retiring after the 2022 elections. And the Republicans running to replace them sided with Trump's efforts to sabotage the bipartisan deal.

Burr and his fellow North Carolina Republican, Sen. Thom Tillis, both voted in favor of the bill, but all three of the top Republicans running to replace Burr — Rep. Ted Budd, former Rep. Mark Walker and former Gov. Pat McCrory — opposed it, criticizing it as too expensive and claiming it may expand the budget deficit. All three supported Trump's tax cuts, which massively increased the deficit and heavily benefited the richest North Carolinians.

"Republicans are bending over backwards to get this deal," complained "Hillbilly Elegy" author and venture capitalist J.D. Vance, one of the Ohio GOP contenders. "Really, it's just a partisan hatchet job."

This trend played out across the country as Republicans trashed the bill while the Democrats they hope to challenge worked to ensure vital funding would flow to their constituents.

While the Arizona Democratic Party called out all of the major Republican Senate candidates for their "silence" on the bill, Sen. Mark Kelly, D-Ariz., sought to shore up his re-election hopes by securing more than $5 billion to fix roads and bridges in the state, at least $100 million to expand affordable broadband, and more than $500 million for Arizona ports. The package also included a Kelly-authored bill to improve electrical grid reliability and improve wildfire prevention.

"Arizonans in every corner of our state are going to benefit from these investments, from expanded high-speed internet access, to improved roads and transit options, to better security and shorter wait times at our ports of entry," Kelly said in a statement. "As water levels fall in Lakes Mead and Powell and fires burn across our state and the West, I worked to include priorities that will make our state more resilient to drought and wildfires."

The three major Georgia Republican Senate candidates have also railed against the plan, arguing that it was too expensive. But newly-elected Sen. Raphael Warnock, D-Ga., wasted no time in securing provisions in the bill to benefit the state. The package included billions in funding for low and no-emission school buses that will be distributed through a program based on Warnock's Clean Commute for Kids Act. Warnock said he also helped spearhead efforts to include $5 billion for the National Infrastructure Project Assistance Program, which is intended to better connect communities, and pushed for the inclusion of $7.5 billion for the RAISE grant program, which funds similar transportation projects. Warnock also fought to include a bill that provides $3 billion to improve highway safety. The Senate also included the RURAL Act, a highway safety bill that Warnock sponsored with Sen. Mike Braun, R-Ind., and an amendment he proposed with Sen. Ted Cruz, R-Texas, to speed up construction of new sections of Interstate 14 from Texas to Georgia.

"Coming out of this pandemic, we have a once in a generation opportunity to repair our nation's aging infrastructure while addressing the worsening climate crisis and supporting job growth, including the clean energy jobs that will move Georgia into the future," Warnock said in a statement. "This legislation is vital to helping us build toward a future in Georgia that is both economically sustainable and ecologically sustainable."

The bill will also provide billions to help New Hampshire repair and improve its roads and bridges, expand affordable broadband, and boost its power grid and water infrastructure. But Gov. Chris Sununu, who plans to run against incumbent Democratic Sen. Maggie Hassan next year, dismissed the legislation during a radio interview this month even as he acknowledged he hadn't read it.

"I don't know exactly where the money's going," Sununu said. "I hope it is actually in infrastructure. A lot of times they say infrastructure, it's really not. Beyond that, people have to understand we got $28 trillion in debt. Show me how we're going to pay for this without burdening America with the bill for generations and generations."

Hassan, who was one of the bipartisan negotiators, touted her work on the bill, noting that she directly negotiated $492 million to protect coastal communities and wildlife and $491 million to protect shorelines from erosion and flooding. She was also directly involved in negotiations to include $42 billion to expand affordable broadband, at least $100 million of which will go to her state, and a $1 billion program to improve local cybersecurity. The package also included Hassan's Railroad Rehabilitation and Financing Innovation Act, which aims to direct loans to develop passenger railroads in New Hampshire and elsewhere. The Senate likewise included Hassan's amendment to ensure her state would be eligible for an advanced technology grant program that can be used to remove PFAS from drinking water.

"It's a truly historic bill," Hassan said on Twitter, "and it's a testament to what we can do when we come together to find common ground."

But a growing number of Trump-allied Republicans have shown no interest in finding common ground, even as conservative stalwarts like Senate Minority Leader Mitch McConnell, R-Ky., and Sen. Lindsey Graham, R-S.C., supported the bipartisan bill. Though the bill was ultimately hammered out over months of painstaking negotiations and senators can now show voters that they secured funding that will benefit their constituents, the Trump wing of the GOP has increasingly concluded that doing nothing except launching attacks on the opposition — like Rep. Marjorie Taylor Greene, who sits on no House committees — is better for fundraising.

Florida stands to gain about $13 billion for highway projects, $2.6 billion for public transportation and hundreds of millions to expand electric vehicle charging stations and rural broadband. But Sen. Marco Rubio, R-Fla., facing a 2022 re-election battle that could become the most expensive Senate election ever, said he could not support the deal.

"I support investing in roads, bridges, broadband, and efforts to mitigate against sea-level rise, and I hoped there would be a bill I could vote for," Rubio insisted in a statement. "But this bill was negotiated in secret, rushed through the process without meaningful opportunities to have input, and adds a net increase ... to the national debt. I can't vote for a bill like that."

Fellow Sen. Rick Scott, R-Fla., who is leading fundraising efforts for Senate Republicans, argued that "less than half of this bill is for roads, bridges, airports, and seaports," insisting it was full of "liberal priorities."

Some Republican candidates have increasingly echoed Trump's tone on the bill, including in Pennsylvania, which is expected to get nearly $19 billion for bridges, roads, and other projects. But Republican Senate candidate Jeff Bartos called the bill "the latest iteration of a Washington hell-bent" on spending "money our children and grandchildren haven't even earned yet." Fellow GOP candidate Sean Parnell called the bill a "trillion dollar corporate welfare scheme for leftwing special interests."

"The Republican Senate field continues to demonstrate that they have no real solutions to offer voters," Jack Doyle, a spokesperson for the Pennsylvania Democratic Party, said in a statement.

McConnell has pushed back on Trump's criticism of the bill to some degree, instead touting Biden's credentials as a "moderate" and giving him "a lot of credit" for pushing the bill through. McConnell has held onto his leadership position for years in large part thanks to his efforts to steer more federal money to his constituents in Kentucky than to nearly any other state. He concluded it was vital to pass infrastructure spending despite his vow just three months ago to oppose all of  Biden's agenda.

"Infrastructure is popular with both Republicans and Democrats," McConnell told The Wall Street Journal. "The American people, divided, sent us a 50-50 Senate and a narrowly divided House. I don't think the message from that was, 'Do absolutely nothing.' And if you're going to find an area of potential agreement, I can't think of a better one than infrastructure, which is desperately needed."