Lay off Joe Biden: He didn’t “lose” Afghanistan — we are finally leaving it alone

We spent 20 messed-up years in Afghanistan flexing our muscles and money, and now we are making a messy exit 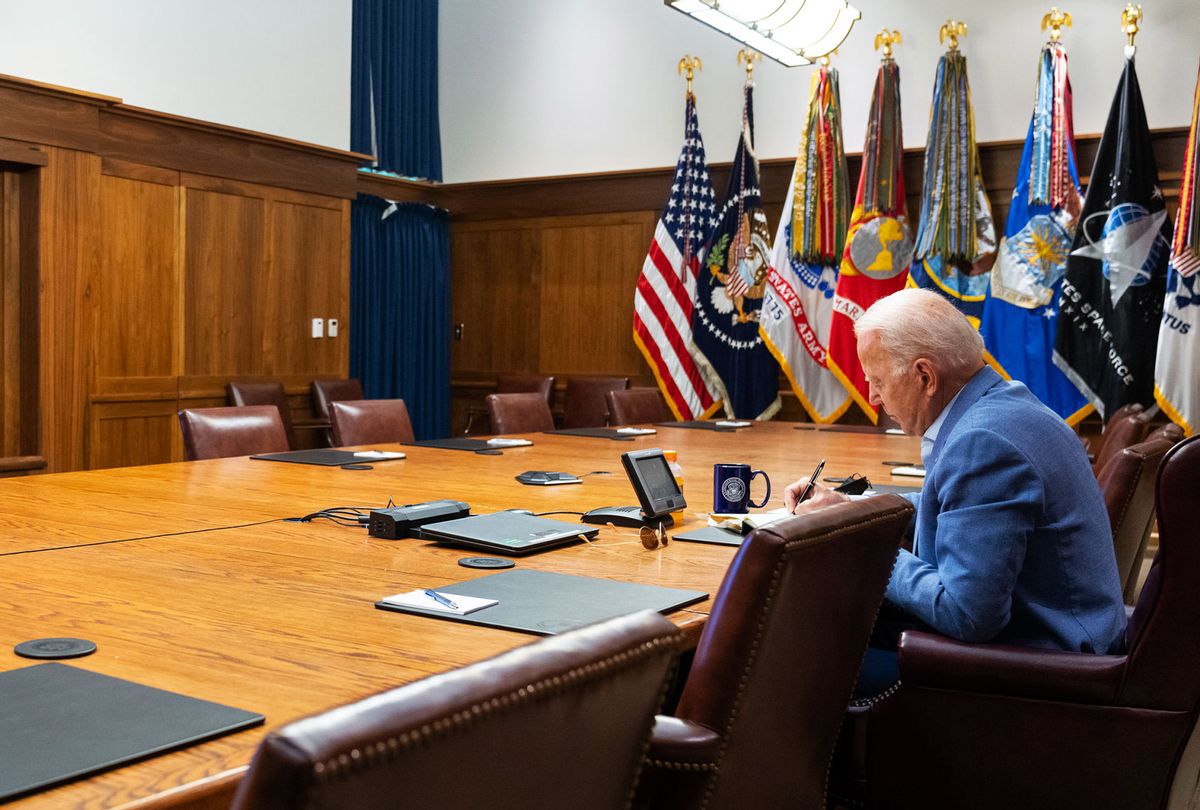 In this White House handout, U.S. President Joe Biden and Vice President Kamala Harris (off-camera) hold a video conference with the national security team to discuss the ongoing efforts to draw down our civilian footprint in Afghanistan August 16, 2021 at Camp David in Frederick County, Maryland. In addition, the President and Vice President were briefed on the earthquake in Haiti. (White House via Getty Images)
--

Do you really think our pull-out from Afghanistan would have looked any different under the man who handled the coronavirus pandemic so well that he cashiered 400,000 American lives? He claimed over and over that he was going to end the "forever wars" and get us out of Iraq and Afghanistan once and for all. He was the president who said he could "make a deal" with the Taliban that was supposed to lead to a peaceful reconciliation with the Afghan government upon the withdrawal of American troops.

Taliban insurgents cleverly allowed cameras from Al Jazeera to film them walking through the presidential palace in Kabul demonstrating how a neat and tidy transfer of power looks, compared with what was attempted by the violent Trump mob that tried to take over the U.S. Capitol. This has led to predictable hand-wringing and pearl-clutching by the usual gaggle of Trump puppets, who the likes of MSNBC and CNN have been only too happy to allow on air to spew their anti-Biden garbage.

I swear, if I see the grim visage of one more Republican congressman lamenting the "chaos" caused by Joe Biden and the promises we broke with our "Afghan partners," I'm going to puke. We didn't have Afghan partners; we had people in a foreign country we showered with money and ordered around and told what to think and who to believe, which was us. Republicans have been waiting to hang "losing" the Afghanistan war around the neck of Joe Biden since he announced back in April that we would withdraw the troops remaining in that country by the end of this month. Unmentioned by all the Trump-puppets is the fact that Biden is doing nothing more or less than carrying out to the letter the deal Trump made with the Taliban last year: that we would pull all our troops out, that we wouldn't engage Taliban fighters in hostilities and they wouldn't engage us, and that the Taliban would pledge not to turn the country back into a stronghold for terrorist groups like al-Qaida and the Islamic State group.

Afghanistan didn't have a functioning government, but rather a bunch of people with official titles who were paid to do what we told them. Afghanistan didn't have a functioning army, it had a uniformed gang of men we gave M-16s and taught how to march and shoot. At least some of them were Taliban sympathizers. Some of those expensively trained Afghan soldiers shot and killed their American "partners," proving just what side they were really on. That the Afghan army is said to have "melted" into the populace as the Taliban walked triumphantly into Kabul should hardly be a surprise. Raise your hand if you expected anything different to happen. I'll wait.

Hmmm. No takers? I didn't think so.

With Afghanistan, we didn't even have the excuse that we were supporting a "war of independence" like we claimed about Vietnam. It was a big-power police action from day one. Bin Laden and al-Qaida hit us, so we went in there to take them out. We began losing Afghanistan the day we "took" Kabul from the Taliban and said we had driven al-Qaida terrorists out of the country.

Here's the deal with a big, muscular country like the United States that thinks it should have so much say about the way the world is run that we have military outposts in 140 countries: The minute we "take" a city, or a region, or a country, we've lost it, because everyone who lives there knows two things.

One, that we were never really going to live there, like we would if we changed citizenship or got a visa to move to a country like France. That's living in a country. We did what we always do in countries we occupy but don't live in. We walled off limited areas and turned them into Little Americas and called them "base camps" complete with resident McDonald's and KFC outlets. That's where the Americans who "took" Afghanistan lived, and nobody knew that better than the Afghans themselves.

Sure, there were some American civilians who actually lived in Afghan homes or apartments they rented or bought. Most of them worked for NGOs or international aid organizations like Doctors Without Borders or the dozens of groups that set up programs to help establish schools to educate Afghan girls and women. But few were in that country on official business of the American government. Most of the Americans representing our government lived behind gigantic concrete walls or Hesco barriers topped with razor wire and traveled in armored SUVs and Humvees in heavily defended convoys.

When I was in Iraq and Afghanistan around American troops, I used to ask them how they would like it if some foreign country moved a bunch of soldiers into their hometowns and seized property owned by locals and walled off that property and topped it with razor wire and then began moving around their hometowns in armored vehicles carrying soldiers with machine guns and grenades and even heavier weapons. To a soldier, they replied that would never happen in their hometowns, because people wouldn't let it.

Everywhere we established an American presence in Afghanistan was a hometown that didn't like being occupied by heavily armed American soldiers. So what did we expect?

The other thing the locals know with certainty is that we would leave. Hell, they watched 20 years of American soldiers cycle through their service in one-year tours. If they worked with the American military, Afghans could get to know a lieutenant in 2002 and watch them return as a captain in 2006, as a major in 2010, as a colonel in 2016, even as a general in 2020. But nobody stayed. Few became familiar with Afghan customs. Even fewer learned the language. They knew we wouldn't stay the course because most Americans Afghans came into contact with didn't stay more than a year.

The arrogance of belittling the "backward" way of life of those in a country like Afghanistan is breathtaking. I have known people in this country, the allegedly modern United States, who grew up without electricity in their homes, who carried water in a bucket from a spring to a house that had no indoor plumbing, who didn't see a store-bought piece of clothing until they were 30 years old, who never slept under anything but a homemade quilt and didn't see a wool blanket until they were middle aged; people who grew up without a family car, who fed themselves with what they grew and slaughtered. You want to talk about backward? How about refusing to be vaccinated for COVID, or states which have passed laws that control women's lives by limiting or completely ending their right to abortions? Or worshiping god by holding that women cannot be leaders or pastors in church?

The Afghan people know who they are and more than that, they know who they have always been, and they are just as proud as we are. I once sat down in a family compound behind 20-foot mud brick walls with a farmer and his sons who were descended from the family that had farmed that land and lived on it in mud brick compounds exactly like that one for more than 1000 years. When I used the word "Taliban" with the father, it meant "religious people" to him, not enemy. He took me outside and pointed down the road to a nearby farm. "Taliban," he said. He pointed further to another farm. "No Taliban," he said. Both farms were his neighbors. What he couldn't point to was the presence of anyone or anything having to do with the Afghan government, because in the remote region where his farm was along the border with Pakistan, there was no Afghan government.

We spent 20 messed-up years in Afghanistan flexing our muscles and spreading our money around, and now we are making a messed-up exit. We are leaving behind a country comprised largely of people just like the farmer I visited in his mud-brick compound, people who have never had contact with their government, people who live by religious rules and customs which are foreign to us and with which we don't agree, even rules which we consider to be cruel and "backward."

But it's their country, and those are their rules and customs, and now they will return to living as they did before we got there and started ordering them around and demanding that they do things our way, or else.

It's "or else" time in Afghanistan, folks, only this time it's their "or else" that counts. That's what you get when you invade and occupy foreign countries. You get shown the door and told not to let it hit you on the way out.