When will we stop letting our presidents lie America into wars? 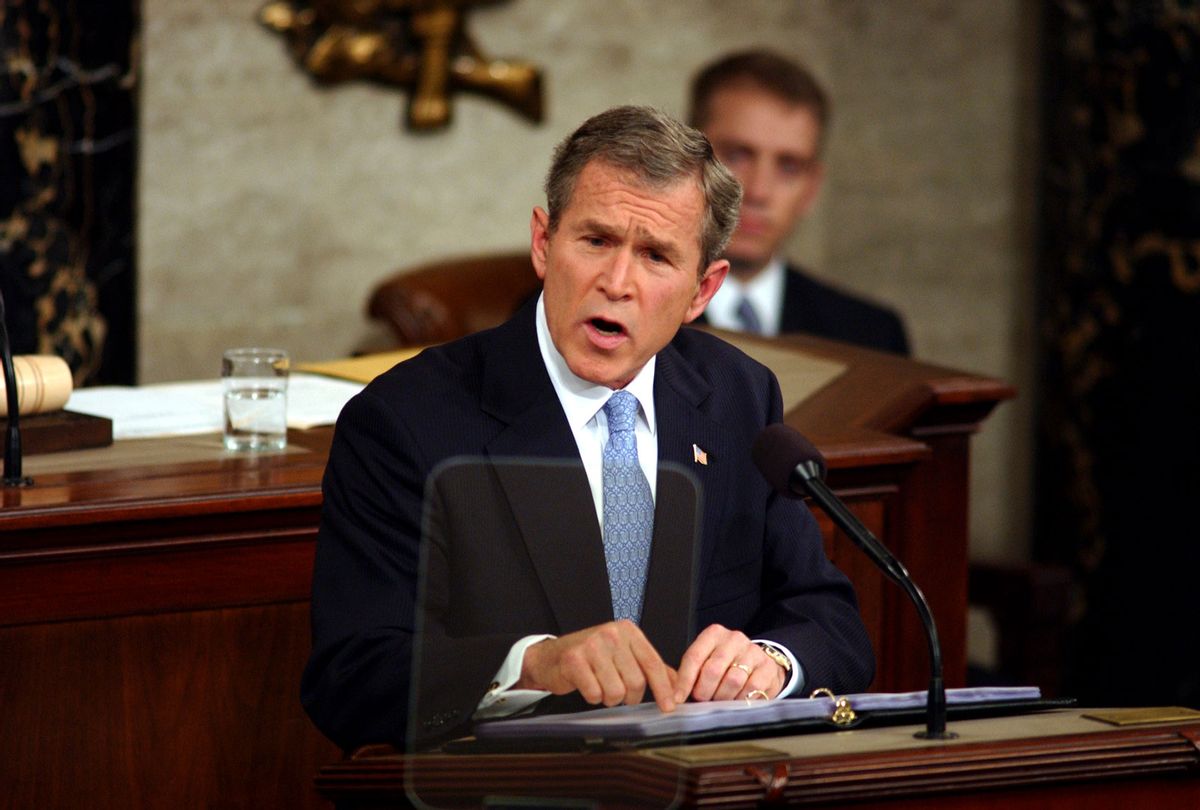 President George W. Bush during his first State of the Union address to a joint session of Congress. (Douglas Graham/Roll Call/Getty Images)
--

Let's never forget that what we are watching happen right now in Afghanistan is the final act of George W. Bush's 2004 reelection strategy.

After 9/11 the Taliban offered to arrest Bin Laden, but Bush turned them down because he wanted to be a "wartime president" to have a "successful presidency."

The Washington Post headline weeks after 9/11 put it succinctly: "Bush Rejects Taliban Offer On Bin Laden." With that decision not to arrest and try Bin Laden for his crime but instead to go to war George W. Bush set the US and Afghanistan on a direct path to today.

More recently, Trump and Pompeo gave the Taliban everything they wanted — power, legitimacy and the release of 5000 of their worst war criminals — over the strong objections of the Afghan government in 2019 so Trump could falsely claim, heading into the 2020 election, that he'd "negotiated peace" in Afghanistan when in fact he'd set up this week's debacle.

"The relationship I have with the Mullah is very good," Trump proclaimed after ordering the mullah who yesterday named himself President freed from prison over the furious objection of Afghan's government, who Trump had cut out of the negotiations.

Now Trump and the GOP are scrubbing the record of that betrayal of both America and Afghanistan and embrace of the Taliban from their websites, as noted here and here.

And the UK is coming right out and saying that Trump's "rushed" deal with the Taliban — without involvement of the Afghan government or the international community — set up this disaster. "The die was cast," Defense Minister Ben Wallace told the BBC, "when the deal was done by Donald Trump, if you want my observation."

Trump's sabotage notwithstanding, President Biden, the State Department and the Pentagon should have anticipated this week's debacle in Afghanistan. The fact that they didn't speaks volumes about how four administrations, the Pentagon and our defense contractors covered up how poorly the Ashraf Ghani government was doing there. Just like they did with Vietnam. It's on all of them.

And this isn't the first time a president has lied us into a war.

Bush's lies that took us into Afghanistan and, a bit over a year later into Iraq, are particularly egregious, however, given his and Cheney's apparent reasons for those lies.

In 1999, when George W. Bush decided he was going to run for president in the 2000 election, his family hired Mickey Herskowitz to write the first draft of Bush's autobiography, A Charge To Keep.

Although Bush had gone AWOL for about a year during the Vietnam war and was thus apparently no fan of combat, he'd concluded (from watching his father's "little 3- day war" with Iraq) that being a "wartime president" was the most consistently surefire way to get reelected and have a two-term presidency.

"I'll tell you, he was thinking about invading Iraq in 1999," Herskowitz told reporter Russ Baker in 2004.

"One of the things [Bush] said to me," Herskowitz said, "is: 'One of the keys to being seen as a great leader is to be seen as a commander-in-chief. My father had all this political capital built up when he drove the Iraqis out of (Kuwait) and he wasted it.

"[Bush] said, 'If I have a chance to invade Iraq, if I had that much capital, I'm not going to waste it. I'm going to get everything passed I want to get passed and I'm going to have a successful presidency.'"

The attack on 9/11 gave Bush his first chance to "be seen as a commander-in-chief" when our guy Osama Bin Laden, who the Reagan/Bush administration had spent $3 billion building up in Afghanistan, engineered an attack on New York and DC.

The crime was planned in Germany and Florida and on 9/11 Bin Laden was, according to CBS News, not even in Afghanistan:  "CBS Evening News has been told that the night before the Sept. 11 terrorists attack, Osama bin Laden was in Pakistan. He was getting medical treatment with the support of the very military that days later pledged its backing for the U.S. war on terror in Afghanistan."  When the Obama administration finally caught and killed Bin Laden, he was again in Pakistan, the home base for the Taliban.

But attacking our ally Pakistan in 2001 would have been impossible for Bush, and, besides, nearby Afghanistan was an easier target, being at that time the second-poorest country in the world with an average annual per-capita income of $700 a year. Bin Laden had run terrorist training camps there, unrelated to 9/11, but they made a fine excuse for Bush's first chance to "be seen as a commander-in-chief" and get some leadership cred.

Cheney, meanwhile, was in a world of trouble because of a huge bet he'd made as CEO of Halliburton in 1998. Dresser Industries was big into asbestos and about to fall into bankruptcy because of asbestos lawsuits that the company was fighting up through the court system. Cheney bet Dresser would ultimately win the suits and had Halliburton buy the company on the cheap, but a year later, in 1999, Dresser got turned down by the courts and Haliburton's stock went into freefall, crashing 68 percent in a matter of months.

Bush had asked Cheney — who'd worked in his father's White House as Secretary of Defense — to help him find a suitable candidate for VP.

Cheney, as his company was collapsing, recommended himself for the job.  In July of 2000, Cheney walked away with $30 million from the troubled company and the year after that, as VP, Halliburton subsidiary KBR received one of the first no-bid no-ceiling (no limit on how much they could receive) multi-billion-dollar military contracts.

Bush and Cheney both had good reason to want to invade Afghanistan in October 2001:

Bush was largely seen as an illegitimate president at the time because his father's appointee on the Supreme Court, Clarence Thomas, had cast the deciding vote that made him president; a war gave him legitimacy and the aura of leadership.

Cheney's company was in a crisis, and Afghanistan War no-bid contracts helped turn around Halliburton from the edge of bankruptcy into one of the world's largest defense contractors.

Even Trump had to get into the "let's lie about Afghanistan" game, in his case to have bragging rights that he'd "ended the war in Afghanistan."

In 2019, Trump went around the Afghan government (to their outrage: he even invited the Taliban to Camp David in a move that disgusted the world) to cut a so-called "peace deal" that sent thousands of newly-empowered Taliban fighters back into the field and drew down our troops to the point where today's chaos was absolutely predictable.

Trump's deal was the signal to the 300,000+ Afghan army recruits that America no longer had their back and if the Taliban showed up they should just run away. Which, of course, is what has happened over the past few weeks.

As The New York Times noted: "The Taliban capitalized on the uncertainty caused by the [Trump] February 2020 agreement reached in Doha, Qatar, between the militant group and the United States calling for a full American withdrawal from Afghanistan. Some Afghan forces realized they would soon no longer be able to count on American air power and other crucial battlefield support and grew receptive to the Taliban's approaches."

Jon Perr's article at Daily Kos does a great summary, with the title: "Trump put 5,000 Taliban fighters back in battle and tied Biden's hands in Afghanistan." Trump schemed and lied to help his reelection efforts, and the people who worked with our military and the US-backed Afghan government are and will pay a terrible price for it.

"When I came to office, I inherited a deal cut by my predecessor—which he invited the Taliban to discuss at Camp David on the eve of 9/11 of 2019—that left the Taliban in the strongest position militarily since 2001 and imposed a May 1, 2021 deadline on U.S. Forces. Shortly before he left office, he also drew U.S. Forces down to a bare minimum of 2,500. Therefore, when I became President, I faced a choice—follow through on the deal, with a brief extension to get our Forces and our allies' Forces out safely, or ramp up our presence and send more American troops to fight once again in another country's civil conflict. I was the fourth President to preside over an American troop presence in Afghanistan—two Republicans, two Democrats. I would not, and will not, pass this war onto a fifth."

America has been lied into too many wars.  It's cost us too much in money, credibility and blood.  We must remember the lies.

When President Ford withdrew US forces from Vietnam (I remember it well), there was barely a mention of McNamara's and LBJ's lies that got us into that war.  Similarly, today's reporting on the chaos in Afghanistan almost never mentions Bush's and Cheney's lies and ulterior motives in getting us into that war in the first place.

We can't afford to let this one go down the memory hole, too.  We must learn from our mistakes.