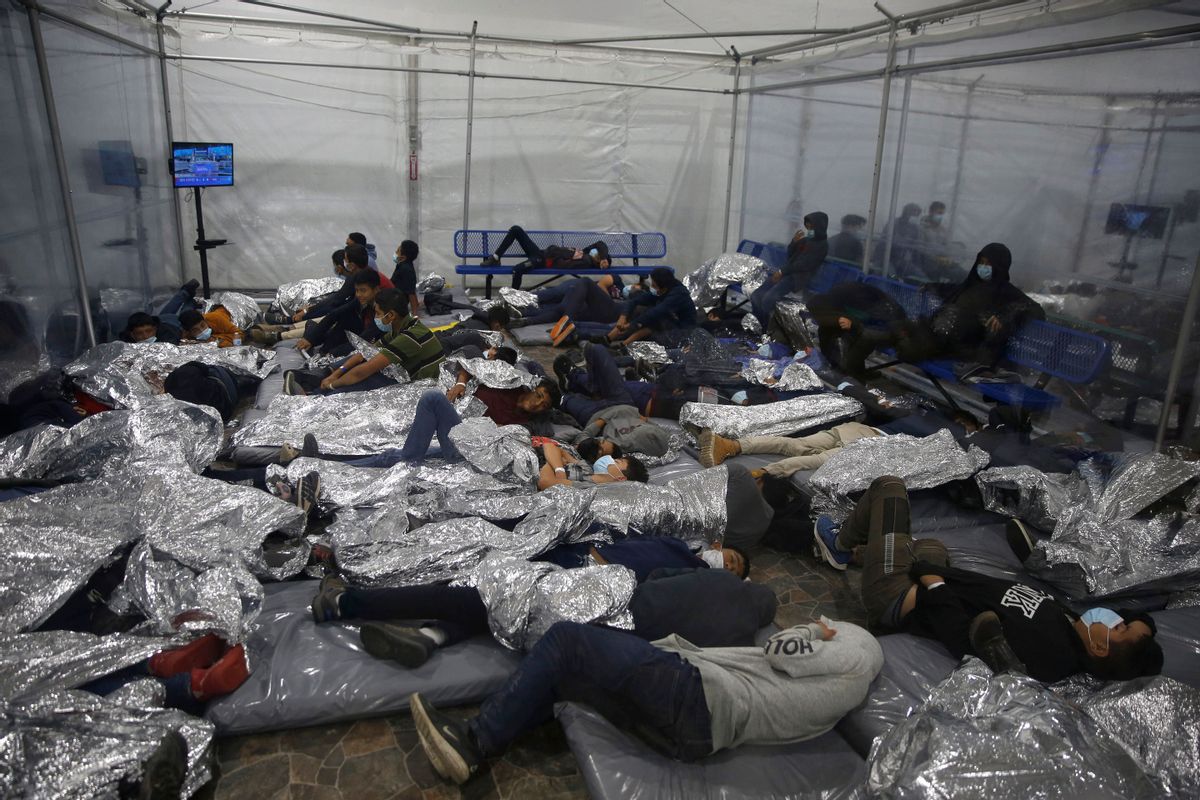 Young children rest inside a pod at the Donna Department of Homeland Security holding facility, the main detention center for unaccompanied children in the Rio Grande Valley. (DARIO LOPEZ-MILLS/POOL/AFP via Getty Images)
--

President Joe Biden promised to end prolonged immigration detention and reinvest in alternatives that help immigrants navigate the legal process while living outside of government custody. These promises were part of Biden's campaign platform and the reform bill he sent to Congress on his first day in the White House.

But six months in, Biden's administration and his Democrat-led Congress are spending millions more taxpayer dollars to expand detention and surveillance of immigrants. A private prison company is profiting from both.

To understand why the president's promises and actions aren't matching up, Capital & Main interviewed a dozen policy experts, analyzed recent government spending plans and looked back at past attempts to shrink detention.

Capital & Main found that "alternatives to detention" has come to mean something different to lawmakers, for-profit companies and community groups. The private prison industry has lobbied to make surveillance the government's chosen alternative, whereas the community organizers who originally coined the term intended for lawmakers to support legal and social services.

The federal government and its contractors have said for almost two decades that "alternatives to detention" would reduce incarceration of immigrants for civil violations. But under Biden, both systems are continuing to grow alongside each other.

"It's really insidious," said Caitlin Bellis, an attorney with the nonprofit National Immigration Project of the National Lawyers Guild. "We see a trend of extending the carceral state in ways that are sold as less intrusive, but that actually end up placing people under state monitoring for much longer and extend control over people's lives."

Detention and surveillance are both growing

When former President George W. Bush launched the Intensive Supervision Appearance Program in 2004, it was touted as an "alternative to detention." ISAP was meant to track people moving through the immigration courts through less expensive and invasive means than confinement. The government hired a private company to monitor a few thousand immigrants through scheduled office check-ins, unannounced home visits and electronic surveillance like ankle monitors.

In almost two decades since, the federal government hasn't reduced its reliance on detention. Rather, Immigration and Customs Enforcement, the country's largest law enforcement agency, has grown its sprawling nationwide network of detention facilities and added on an expansive surveillance system that enables officers to make more arrests.

Congress started off giving ICE a budget of $3 million for "alternatives" in 2003 ($4 million in today's dollars), when the budget for detention was about $600 million.

By 2021, Congress increased ICE's budget to $440 million for alternatives and $2.8 billion for detention.

Although Biden had the chance to keep detention use low and even phase it out altogether, he is now the fourth consecutive president to support expanding these enforcement tactics.

Detention centers were emptier than they had been in decades amid the COVID-19 pandemic — 15,000 detainees remained, compared to the record 55,000 reached under Donald Trump.

At first, detention kept shrinking in Biden's first month. But ICE has since increased the number of people in its custody by about 50% — detaining more than 25,000 immigrants as of July 30, 2021.

Congress has already given ICE enough funding through September 2021 to detain up to 31,500 immigrants daily. Looking ahead to the next government spending year, ICE says it needs at least 30,000 detention beds available because of "surging migrant patterns along the Southwest Border."

ICE is arresting fewer people under Biden than Trump — about half as many per month. But the new administration is increasingly arresting more people crossing into the United States from Mexico. Advocates said the ramped-up enforcement may be in response to a "border crisis" narrative pushed by conservatives ahead of mid-term congressional elections in 2022.

Biden has taken steps to reduce arrests around the country. The president immediately directed ICE, and other enforcement agencies like Customs and Border Protection, to stop the Trump-era practice of prioritizing arrests of all undocumented immigrants (which some officers have not heeded). ICE has stopped using two detention facilities under investigation for alleged detainee abuse. And recently ICE was told to stop arresting pregnant, nursing or postpartum immigrants — restoring the Obama-era practice of only detaining them under extraordinary circumstances. (Democrats in both chambers of Congress are supporting the move with legislation to make it permanent).

But the administration expects to detain more people anyway due to its border arrests strategy and plans to fast-track immigration court hearings in an effort to clear deep backlogs, which could speed up deportation orders.

At the same time, Biden is asking Congress to increase ICE's funding next year so that its "alternatives to detention" program can track 140,000 immigrants — about two-thirds more than the roughly 86,000 enrolled when Biden entered office. Currently, San Francisco, Los Angeles and Detroit have the most people enrolled, followed by Miami, Newark and Chicago.

Some participants also must wear ankle monitors, which they say are painful and interfere with daily activities like going to work, accessing health care and participating in the community. International human rights bodies like the United Nations Refugee Agency strongly discourage "harsh" forms of electronic monitoring like ankle monitors.

ICE did not respond to Capital & Main's request for comment or emailed questions.

When community groups started asking the federal government to invest in alternatives to detention in the 1990s, the private prison industry saw a profitable opportunity. While bipartisan consensus was building around reducing incarceration, the industry's bread-and-butter work, there was money to be made tracking people released from prisons, jails and detention.

Each year, private prison giant GEO Group pours more than a million dollars into political donations and lobbying of members of the U.S. House and Senate to keep contracts for both detaining immigrants and monitoring them, advocates said.

"They're making money at both ends of the system," said Julie Mao, an immigration attorney and deputy director of Just Futures Law. "Once [immigrants are] released from detention, they're putting on the ankle shackles or requiring people to do the SmartLINK app."

Now, under Biden, GEO Group is relying more on these profits.

Biden ordered two top federal agencies, the Bureau of Prisons and the U.S. Marshals Service, to stop using private prisons for federal inmates. It was a financial blow to private prison companies.

But GEO Group recently told its investors not to worry — losses will be offset in part by detaining and surveilling immigration detainees, which are not included in Biden's order.

Before Trump left office, GEO Group locked in several long term detention contracts with ICE, including a 10-year contract extension for a massive facility in South Texas and 15-year contracts for five detention centers in California, where local laws were soon set to banprivate prison companies from detaining immigrants. GEO Group and the federal government are suing to overturn California's ban.

On top of this detention income, GEO Group is counting on its Colorado-based subsidiary BI Incorporated.

BI started out in the late 1970s as a dairy cow tracking service in the foothills of the Rocky Mountains. But the company grew exponentially over the years into the largest nationwide provider of electronic monitoring technology for keeping tabs on people in local, state and federal criminal justice and immigration enforcement systems.

ICE has paid BI Incorporated more than $1 billion since the company started tracking immigrants with its proprietary technologies in 2004. By 2011, GEO Group purchased BI to secure those profits.

For the 2021 spending year, Congress boosted the budget for alternatives to $440 million — a $120 million increase from the previous year.

Providing these tracking services has become so remunerative that several companies have sued to protest not winning the contracts. CoreCivic, the country's second-largest private prison company, was so desperate to take over the job in March 2020 that it offered ICE a low bid in an attempt to be more competitive ($1.9 billion compared to BI's $2.6 billion bid). The government thought CoreCivic's price was unrealistically low and rehired BI.

Surveillance is invasive and leads to more detention

ICE's privately run monitoring program has been criticized by immigrant rights groups and tech experts for replicating many of the same problems of the detention system. The surveillance boom is also creating new physical and psychological harms, as well as privacy concerns, advocates said.

"It's a terrorizing tactic. It's meant to make people feel scared, and it works," said Grace Kindeke, who works with the American Friends Service Committee in Rhode Island providing legal, cash and housing assistance to immigrants, including some who have been monitored by BI upon release from detention.

ICE officers and BI employees have broad discretion to decide which immigrants participate, how they are tracked and whether they're sent back to detention. Since 2013, ICE officers have relied on a data tool that recommends when to detain or release immigrants. Following the Trump administration's "zero tolerance" policies, ICE altered the algorithm in 2017 to remove the recommendation for release. The tool has since suggested detention for almost everyone.

Advocates told Capital & Main that data tools like these let ICE claim objectivity while reinforcing racial biases and a presumption of detention rather than release.

The compulsion to detain goes so far that in 2015 the Department of Homeland Security suggested that ICE's alternatives to detention would be more effective if some resources were shifted back into arresting and detaining "noncompliant participants."

Since then, ICE has used ankle monitor GPS data to orchestrate mass arrests, including the biggest ever U.S. workplace sting in a single state — when officers arrested more than 600 people at seven poultry plants in Mississippi in 2019.

Oftentimes, ICE chooses to track recently arrived asylum seekers, including families, who would benefit from legal and social services rather than invasive tracking, advocates said.

Agencies like ICE should be judicious when using tech tools, said Joe Russo, who manages the National Law Enforcement and Corrections Technology Center at the University of Denver.

"Almost anything is better than detention. So if we can use technology to get folks out of facilities, whether it's immigration or criminal justice, then it definitely should be explored," Russo said. But electronic monitoring isn't always the answer. "There might be less intrusive ways of accomplishing the same goal."

The BI-run intensive supervision program is increasing surveillance through facial recognition and GPS tracking on its SmartLINK phone app. The privacy policy lets officers access virtually any information collected, according to the Just Futures report. This potentially includes real-time location data the agency could use to plan arrests.

Panjwani said that these technologies are not precise, raise privacy concerns and reinforce a carceral approach to managing immigration.

"These programs are pitched as a softer version of immigration enforcement," he said. "But I don't think we can accept anything less than the full and wholesale transformation of the system itself and the foundational premise that immigrants should be criminalized."