Republicans split over Afghan refugees: Trump is now being led by the raging racism of his base

Why Donald Trump, who always has his fingers on the pulse of the GOP base, has suddenly shifted his tune 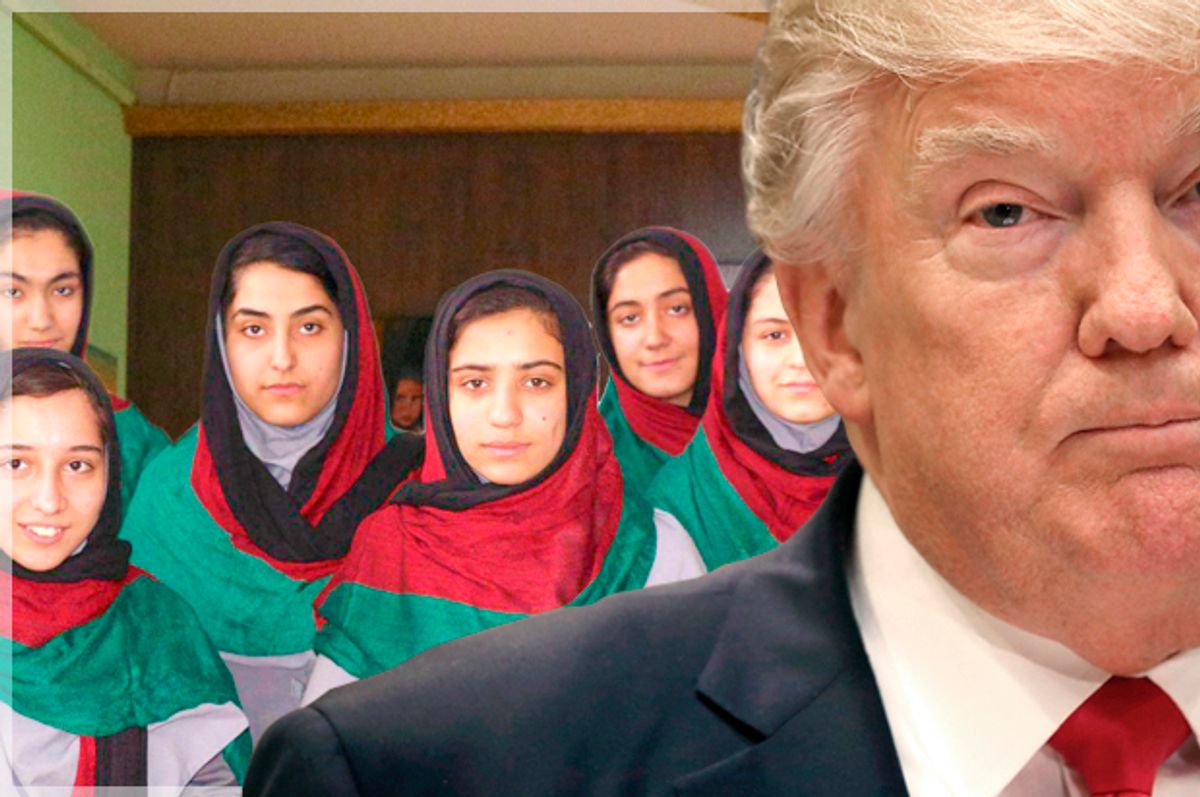 I don't think most people fooled themselves into thinking that the withdrawal of US troops from Afghanistan was going to be a great moment of triumph for America. It would be an ignominious end no matter how the last chapter was written. And regardless of the execution, it was clear that the poor wartorn country was either in for years of civil war or a swift takeover by the oppressive Taliban. (The mere fact that the Trump administration had been negotiating directly with the Taliban directly gave credence to the notion that the latter outcome was likely.) Nonetheless, watching the chaotic scenes from Kabul that have been blanketing the airwaves for the past week has been heartbreaking. It's hard to imagine that it could have gone much worse.

This was not unanticipated. I had personally been following this story as it unfolded last spring with a mix of confusion and disbelief:

Recent reports say the White House was "wary" of right-wing backlash if they agreed to open up the country to Afghan refugees, including those who helped the Americans over the past 20 years. If true, they were extremely foolish. Of course, there was going to be a right-wing backlash no matter what they did. You'd think all Democrats would have learned that by now. All the dithering achieved was allowing the right to hit them from all directions.

Some GOP officials (along with many Democrats and members of the press) are highly critical of Biden for failing to adequately prepare the evacuations. I assume some are sincerely concerned but it's hard to imagine that the likes of Minority Leader Mitch McConnell, Georgia Governor Brian Kemp or Arizona Governor Steve Ducey have been losing any sleep over the plight of Afghan refugees. (Funny, they had nothing to say when Trump dropped visas for the Afghan interpreters two years ago.) Since it's something they can attack the Biden administration for botching, I don't think it's too cynical to assume they see the political advantage in preening before the public as being more moral and compassionate than the "comforter in chief" who promised to restore the soul of America.

I have to wonder how that's going to go over with the GOP base, however, because some of their most important leaders have taken the opposite position.

Naturally, Tucker Carlson leads the pack, telling his rapt audience that any acceptance of Afghan refugees is just the latest chapter in the Democratic "Great Replacement" strategy to destroy the ethnic purity of America by polluting it with foreigners. He was echoed in that repulsive sentiment by youth leader Charlie Kirk who said:

The reptilian former Trump adviser Stephen Miller weighed in on this theme as well telling Fox News host Laura Ingraham, "resettling in America is not about solving a humanitarian crisis, it's about accomplishing an ideological objective – to change America."

Oh, the deviousness of Democrats having Republicans start a war that lasts for 20 years in order to eventually bring the refugees who helped them back home to displace all the Real Americans. They really are playing the long game.

Ingraham herself took a few minutes off from demonizing the "COVID infected migrants" at the southern border to ask why Americans should feel any obligation to people who helped American troops overseas in the first place. And then there are just the plain old appeals to grotesque racism from OAN news host and former Trump campaign staffer Steve Cortes:

He responded to criticism of that tweet by saying, "I welcome the scorn of the credentialed ruling class … I stand for working-class citizens and take unpopular stands in defense of the Deplorables."

Cortes was referring to the MAGA faithful who are no doubt looking for leadership from Trump himself rather than pale imitations like Cortes. But Trump has been somewhat flummoxed on this subject in these early days, which is unsurprising since he spent years promising to do exactly what Joe Biden has actually done and he hasn't quite figured out how to attack him for it. At first, he seemed to be taking the part of the Afghan refugees, issuing a statement that said, "can anyone even imagine taking out our Military before evacuating civilians and others who have been good to out Country and who should be allowed to seek refuge?" But now he seems to have belatedly realized that he is out of step with his followers. He emailed the picture of the plane filled with Afghan refugees to his list, writing, "This plane should have been full of Americans. America First!"

Trump wants to criticize Biden for failing to properly plan for the evacuation while at the same time he must know that this goes against everything he has formerly advocated when it comes to refugees. After all, he didn't have a thought for the Kurds he ruthlessly betrayed two years ago. And while everyone remembers that his first campaign was a disgusting assault on undocumented immigrants, it was equally hostile to Muslims, specifically refugees. He famously promised to ban all Muslims from entry (and actually tried to do it when he was elected.) And he specifically said that he would deport all recent Syrian refugees, most of whom were children and people over 60:

They're going to be gone. They will go back. … I've said it before, in fact, and everyone hears what I say, including them, believe it or not," Trump said of the refugees. "But if they're here, they have to go back, because we cannot take a chance.

I predict that is where he will land again, fearmongering about Islamic terrorism, accusing the Biden administration of allowing jihadists to climb aboard those planes and come to America to kill us all in our beds. If there's one thing he knows how to do, it's play his greatest hits.

In any case, it is only a matter of time before he finds a way to wield the crude xenophobia that made him popular with the right-wing in the first place. The question is whether or not the rest of the GOP will follow him down that dark path. If history is any guide they'll be toddling along behind him before too long. This will not be the last of it.