"This is how Texas Democrats lose elections," one state representative said 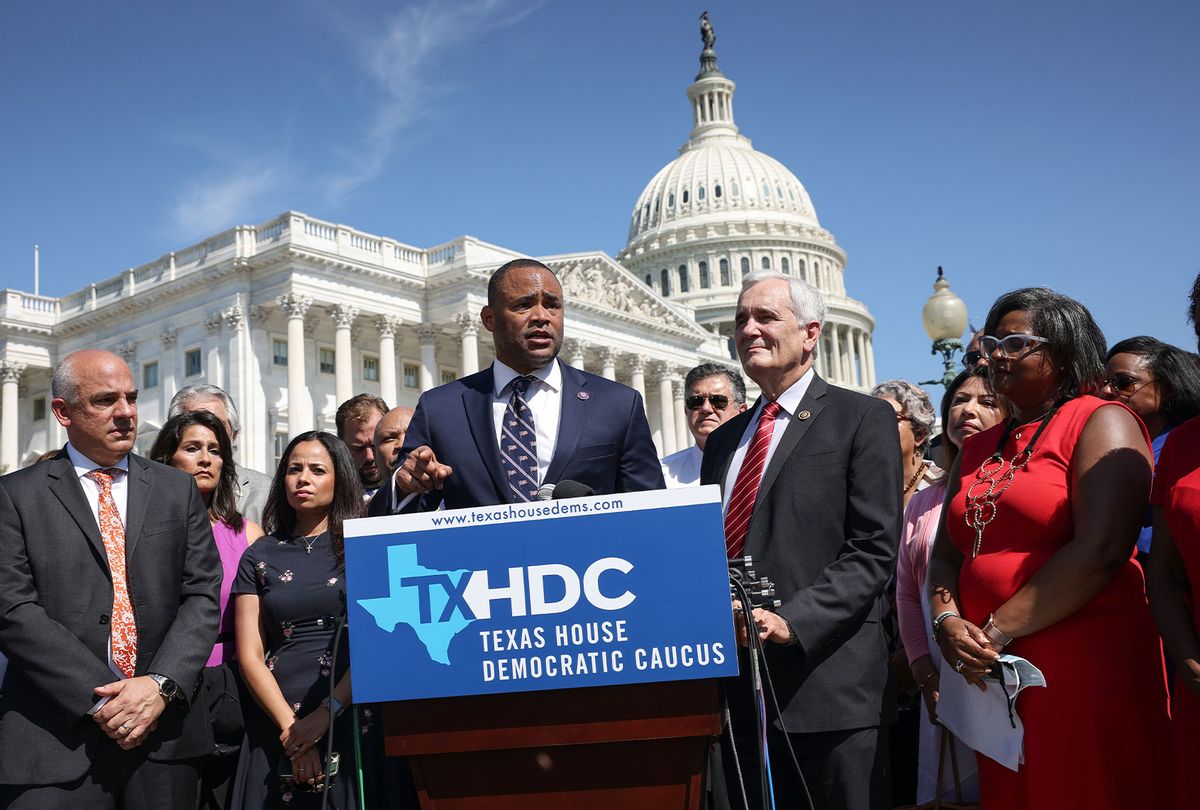 Congressmen Rep. Marc Veasey (D-TX) and Lloyd Dogget (D-TX) speak alongside Texas state House Democrats during a news conference on voting rights outside the U.S. Capitol on July 13, 2021 in Washington, DC. More than sixty Texas House Democrats left the state overnight to Washington, DC, in order to block a voting restrictions bill by denying a Republican quorum. Texas Governor Greg Abbott has threatened to arrest the legislators when they returns to the state. (Kevin Dietsch/Getty Images)
--

Texas Republicans are poised to pass new voting restrictions after three Democrats from the state House broke ranks with their fellow lawmakers who fled the state to block the chamber from being able to take up a vote on the measure. They were gone for 38 consecutive days.

Texas Democrats last month traveled to Washington D.C. to prevent the state House, which requires two-thirds of members be present in order to make quorum, from having enough members to conduct business just as the Republican majority was set to vote on a bill that voting advocates say would disproportionately suppress ballot access for voters of color and the disabled.

Republican House Speaker Dade Phelan earlier this month signed civil arrest warrants for the 52 House Democrats missing from the Capitol when the chamber began a special legislative session. Though dozens of Democrats have now returned to the state, no arrests have been made.

Some Democrats have slowly trickled back to the Capitol since leaving, but the House lacked a quorum until three Democrats in particular -- Reps. Garnet Coleman, Ana Hernandez and Armando Walle -- made a surprise return on Thursday night, paving the way for Republicans to advance the voting bill. The House GOP wasted no time referring the legislation, which was already approved by the state Senate, for a committee hearing on Saturday, according to the Texas Tribune.

"It's been a very long summer. Been through a lot. I appreciate you all being here," Phelan said. "It's time to get back to the business of the people of Texas."

The three Democrats said in a statement they were "proud of the heroic work" to block the bill and bring national attention to the issue.

"Our efforts were successful and served as the primary catalyst to push Congress to take action on federal voter protection legislation. Now, we continue the fight on the House Floor," they said, adding that legislative action was necessary to combat the surge of Covid hospitalizations in the state.

Texas House Democratic Caucus Chair Chris Turner also said that Democrats "secured major victories" by derailing Republican Gov. Greg Abbott's second special session, even though the chamber is now set to vote on the very bill that prompted the walkout. Abbott, who is up for reelection next year, has also loaded the agenda for the special session with other conservative issues like restrictions for transgender athletes, border security and critical race theory.

More than 40 Democrats are still on the lam and members of the group accused the three lawmakers of blindsiding them.

"This could have been shared with Caucus members beforehand," tweeted state Rep. Donna Howard.

"[W]e were literally on caucus calls for 2 hours this morning and none of the defecting Democrats mentioned they were planning on helping the Republicans pass voter suppression bills," wrote Rep. Ana-Maria Ramos.

Texas Democrats had largely returned to the state since their widely-cheered trip to D.C. to press Congress to advance federal voting rights legislation but have been "fearful" that they could be detained by state authorities, according to the New York Times. Some have even "bounced between locations" to avoid being brought back to the Capitol. The House sergeant-at-arms was deployed to deliver arrest warrants to members' offices and even their homes.

"They came up to the door, rang the doorbell," state Rep. Jon Rosenthal told the outlet. "Nobody answered so he folded it in half and stuck it in the doorjamb."

Some Republicans even backed efforts by outside "vigilante" groups to offer rewards of up to $2,500 for information that leads to the arrest of the Democrats.

"If you know the whereabouts of a missing lawmaker, submit a tip," House Elections Committee Chairman Briscoe Cain said in a TikTok video this week with a rifle tacked on the wall behind him.

Rep. Howard told the Times that she was more worried about "vigilante types" than the state police, adding that she has avoided leaving her "undisclosed location" except for quick grocery runs.

The Democratic group has held daily Zoom calls to discuss strategy but there has increasingly been acrimony between a majority of members who wanted to continue the walkout and those that wanted to come back.

"Every morning we have this exercise, this same four or five people who want to go back," an unnamed member of the group told the outlet.

The defectors may have also been swayed by lobbying from Republicans.

Coleman, who broke quorum but did not leave the state after having his leg amputated, told the Dallas Morning News that he returned because it was "the right thing to do."

"I do feel that I contributed to this idea that you've got to burn something down in order to improve it," he said. "I regret that."

The House will now take up the voting bill passed in the Senate earlier this month despite a 15-hour filibuster from Democratic state Sen. Carol Alvarado. The bill would increase protections and access for partisan poll watchers, which has raised concerns about possible voter intimidation. The bill would also ban drive-through voting and 24-hour voting, which appears directly aimed at expanded ballot access in Harris County that officials testified were particularly popular with voters of color. The legislation would add an hour per day of early voting but restrict early voting hours and ban local election officials from sending unsolicited mail-in ballot applications.

"What do we want our democracy to look like?" Alvarado said during her marathon session. "Do we want access to our electoral process to be more difficult for people with disabilities, or do we want to remove barriers for them? For communities of color, do we want to defend the tremendous progress that we've made in civil rights and equality or chip away at their voting rights one Senate bill at a time?"

But her effort ultimately failed to prevent the bill from passing and House Democrats expressed dismay that their weeks-long ploy is expected to likewise fail to stop the legislation.

"Guess what the other defecting Democrats have accomplished by going back," tweeted Rep. Ramos. "NOTHING!"