An alternative that could keep immigrants out of detention — and transform U.S. immigration system 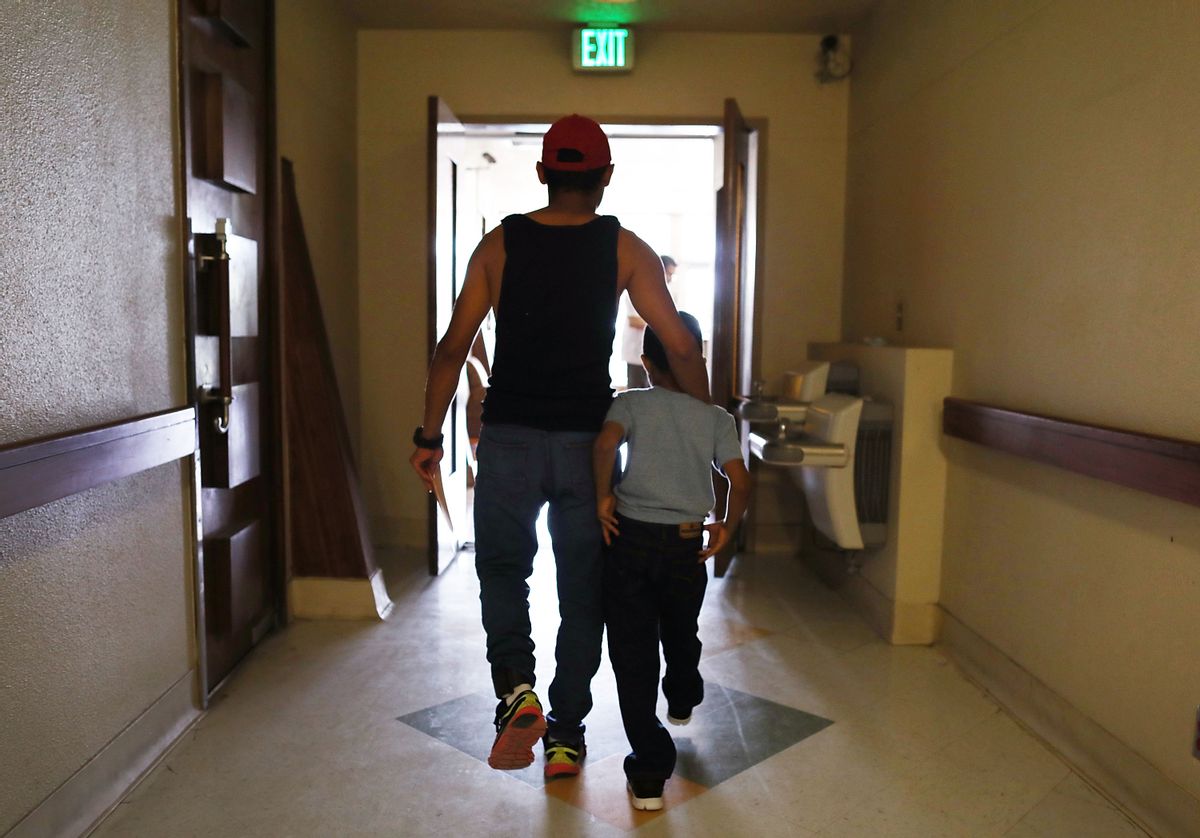 A man walks with his son after being reunited in an I.C.E processing center, after being separated for three months when they tried to cross into the United States. (Joe Raedle/Getty Images)
--

"It's solidarity, not charity," said Grace Kindeke, who helps people recently released from immigration detention with housing, food, legal and health services in her community of Concord, New Hampshire.

Immigrants come to the United States looking for safety and stability. But instead, many find confusion navigating the complexity of the immigration system, said Kindeke, who works with the nonprofit American Friends Service Committee.

Language barriers, limited cash and the federal government's reliance on detention can prevent recently arrived migrants from getting a lawyer, understanding their legal obligations and settling into a new community, especially if they're dealing with trauma, Kindeke said.

In her experience, immigrants are highly motivated to comply with government requirements, as long as they understand what's being asked of them and have the basics to get by.

Hundreds of community groups are currently providing services, and most are ready to expand, according to a nationwide survey by the American Immigration Council. But they're still waiting on support from the new president.

When Joe Biden entered the White House six months ago, he promised to shift money out of immigration enforcement and reinvest in community case management services that "enable migrants to live in dignity and safety while awaiting their court hearings."

The president's plan was to support community groups, like Kindeke's, and facilitate access to doctor visits, school enrollment for children and other social services that help migrants meet their legal obligations without the need to detain them.

"The cost of supporting immigrants is a lot less than the cost of incarcerating them or even the cost of the tech that is used to monitor and surveil them," said Kindeke.

But so far, Biden's administration and the Democrat-led Congress are funneling the lion's share of taxpayer money for "alternatives to detention" into an existing for-profit surveillance program — while spending little on community services.

Progressive lawmakers like Representative Ayanna Pressley are joining advocates in calling on Biden and congressional colleagues to "divert billions in immigration enforcement funding to humane programs that help our communities without hurting them."

But the U.S. government's recent budget plans expand detention and surveillance — which have an established infrastructure and support from powerful government and corporate interests — rather than shifting significant resources into community-run services, Capital & Main has found.

ICE got $440 million for "alternatives" in the 2021 budget year ending next month. This includes an $85 million increase to expand privately run surveillance, and $25 million to fund community groups providing case management services. The Biden administration is asking Congress to keep funding steady in the upcoming budget year.

Getting that money in the right hands will be challenging, advocates said. For decades, the U.S. government has been building up the infrastructure to detain tens of thousands of immigrants on any given day. There is no equivalent infrastructure for case management, said Randy Capps, who directs U.S. research at the Migration Policy Institute.

"ICE tends to deal with it institutionally as an all or nothing. Either you detain or you catch and release," Capps said. As a law enforcement agency, ICE doesn't have the experience, training or mindset to provide social services, he added.

In the past, when Congress has given ICE money for alternatives, the agency has hired private prison companies and rarely referred people in its custody for outside services.

This time around, the U.S. government will try a new approach.

Congress set aside $5 million for a Department of Homeland Security watchdog agency, the Office of Civil Rights and Civil Liberties, to test a method for distributing grants directly to local community groups and nonprofits.

DHS declined to answer Capital & Main's questions but said it "is currently developing this pilot program, and an official launch date is pending. We will provide information on the program and how it will be administered once it's launched."

The congressional budget bills say the pilot project will be modeled after a longstandingFederal Emergency Management Agency program that uses a national board to divvy out funds to humanitarian groups, including some helping migrants in the southern border states of Arizona, California, New Mexico and Texas. The Biden administration also recently asked FEMA to help process child migrants arriving at the border.

Congress expects for the new pilot program to include legal and cultural orientation, social services like mental health care and help reintegrating for those deported.

"That feels like an important shift," said Katharina Obser, a senior policy adviser for the Women's Refugee Commission's Migrant Rights and Justice program. But "given the limited funding that it has and the little information that we have about it right now, I think it really remains to be seen whether that program is going to be set up for success," Obser said.

Some advocates are concerned that although this new program won't be run by ICE, it is still under the purview of an enforcement-minded department.

"We need to remove resources away from the bloated DHS budget and into alternative places," said Layla Razavi, the deputy executive director of the California volunteer group Freedom for Immigrants.

Agencies like the Office of Refugee Resettlement and the U.S. Department of Health and Human Services are better equipped to provide assistance to migrants, Razavi said.

Looking at the budgets for the next two years, the Defund Hate Coalition, a network of advocacy groups, said it is "extremely disappointed" that Congress is not planning significant cuts to immigration enforcement.

"Imagine what you could do with that money in creating welcoming centers and in funding [alternative to detention] programs and staffing them with social workers and trauma specialists and health care professionals and asylum officers," said Vicki Gaubeca, who directs the Southern Border Communities Coalition, a member of Defund Hate.

One service already has widespread public support: government-funded attorneys for immigrants. In 2022, Biden is asking Congress to invest $15 million in pro bono legal representation for families and vulnerable individuals, as well as $23 million for Department of Justice legal orientation programs. Currently, there are two such programs already operating, the Unaccompanied Children's Program and the National Qualified Representative Program, which advocates say could be models for expansion.

With the Biden administration testing a new way of funding community-run services for immigrants, advocates told Capital & Main that lessons learned from the U.S. government's past attempts, international studies and community experiences can help avoid pitfalls.

The U.S. government has tried collaborating with community groups several times over the years to guide immigrants through the legal process. The programs measured effectiveness by compliance, such as ensuring that immigrants attend their court hearings and obey deportation orders. By those metrics, the government deemed its past pilot projects successful. But advocates say this enforcement-minded approach is less effective than providing services, as the government is now attempting to do.

"Programs that are designed to help people navigate — rather than to scare them or track their movements — make the system fairer for the people going through it," said Caitlin Bellis, an attorney with the National Immigration Project of the National Lawyers Guild. Case management approaches are "less intrusive into [immigrants'] lives and let them maintain and make ties with community."

Even without services, people released from immigration detention overwhelmingly attend their hearings, especially if they have an attorney, according to an American Immigration Council analysis of government data. Studies show that offering legal representation and other help to migrants incentivizes them to stay in regular contact, attend court hearings and comply with government orders, even if that means being deported.

This has been true for decades. As early as 1997, the U.S. government hired the nonprofit Vera Institute for Justice to pilot a community supervision program for ICE's predecessor, the Immigration and Naturalization Service. Vera's evaluation showed that almost all participants attended their hearings and complied with court rulings.

"Reducing reliance on detention would allow the U.S. government to treat each immigrant more fairly and humanely, save taxpayer money, and successfully maintain compliance with court proceedings," according to a Vera factsheet.

"This isn't about catch and release. This is about needing to make sure that people are set up to succeed in the immigration process," said Obser, who has researched past U.S. government attempts to test community case management.

Just before Barack Obama left office, his administration launched the Family Case Management Program, which hired private prison giant GEO Group to track asylum-seeking families as their cases wound through the courts. ICE's metrics showed the program effectively ensured participants showed up for their check-ins and court hearings. The pilot program did not provide resources like housing, schooling or job placement.

The Trump administration cut the program short in 2017.

At the time, ICE said that although Family Case Management was cheaper than detention, it was still more expensive than the agency's privately run electronic monitoring system. The agency also said the program wasn't achieving enough deportations, which it considered a key measure of success. Many of the case management participants hadn't yet gotten a court ruling because immigration courts prioritize the cases of detainees.

Obser believes the program "was ended for political reasons."

The Trump administration shut down case management for migrant families just as it was introducing its controversial zero tolerance and family separation policies.

With the U.S. government faltering over the years on case management and continuing to increase detention, many community groups told Capital & Main that they've had to tailor their services to the traumas and challenges of post-release. Now, as Biden's administration looks to support communities, they hope the government will learn from their on-the-ground experience and decades of studies.

Razavi of Freedom for Immigrants said her group previously helped recently arrived asylum seekers and longtime U.S. residents alike through a pilot sponsorship program. They helped track notices to appear, organized translation and interpretation services at court hearings and kept ICE updated about address changes, which are frequent for people recently released. They've also worked with local groups that provide food, shelter and bus fare to people released from detention, and they are launching a pilot project to provide mental health support.

All of these services are currently volunteer and donation driven, but could fit the scope of the government's new investment model.

It's cheaper, more humane and effective to guide immigrants through the legal process than it is to arrest and detain them, according to decades of international studies and guidance from rights organizations like the United Nations.

Globally, more than 60 countries have tested alternatives to detention, according to a studyby the International Detention Coalition, a network of hundreds of groups advocating to reduce immigration detention. Case management was the most successful alternative the researchers found for maintaining compliance while improving the health and wellbeing of participants.

During the COVID-19 pandemic, many countries have also been spurred by public health and economic concerns to release migrants from detention and keep track of them in different ways. The United Nations is encouraging governments to embrace that momentumand make alternatives to detention the norm.

"These supports actually address the root issues that folks are finding themselves falling into that make it so that they're not able to comply," said Kindeke. "Immigrants need the same types of support systems that any other human being living in the United States or any other country needs."